While at Monterey Car Week, we saw this incredible 1948 Tucker Torpedo numerous times. This was the first time that either Al or myself had seen a Tucker on public roads, so we made sure to get photos.

The first time we saw it was in Carmel, right as we were arriving for the Tour d’Elegance. We saw it cross the street a block down, realized it was a Tucker, and then I proceeded to sprint a block and a half to catch it. After that, Al was able to shoot it while we were in the car a few times, once in Monterey and once in Carmel.

Only 51 of these masterpieces were ever produced. They were way ahead of their time technologically, with a rear-mounted flat-6 engine (yes like a Porsche), and a center headlamp that turned with the steering wheel, among other things. They made a movie about Preston Tucker and his car, and I highly recommend it to anyone who is interested in a great story. The Tucker is a legendary piece of American automotive history, and it was beyond thrilling to catch one out in the wild. Enjoy. 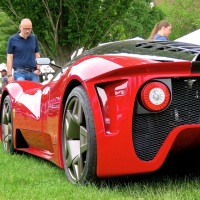