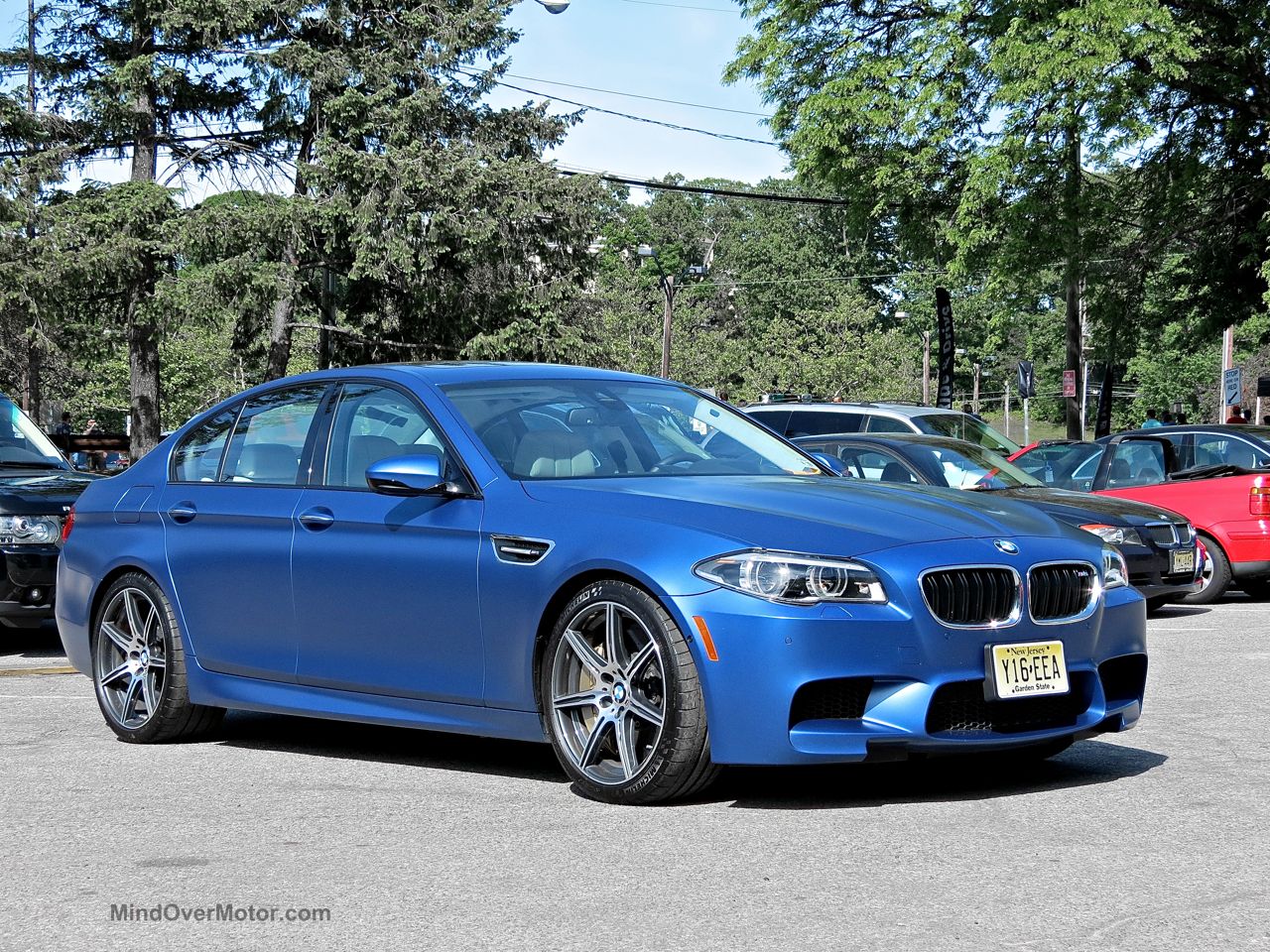 I despised this BMW M5 when it came out, but then I drove it and it totally won me over. You see, I had always seen the E39 M5 as the quintessential BMW M5, and in many ways I still do. But I had been defining the M5 as a driver’s car, which is only a part of what it is actually meant to be. The BMW M5 has really always been about being a four-door useable supercar. As supercars have changed over the last decade or so, the BMW M5 has changed along with them.

The F10 generation M5 you see here is the most modern idea of what a four-door supercar should be, and I must admit that it blew my mind with it’s bag-o-tricks.

It Does More of Everything Now

The original E28 BMW M5 from the 1980s was a practical 5-Series sedan with the engine from the BMW M1 Supercar stuffed under the hood. Sedan practicality with supercar levels of punch, and handling to match. Back then, refinement only really went so far, and there was a trade off between comfort and performance.

Over time, that has become less, and less the case. And now the craziest thing about the M5 is that it is basically a full-fledged luxury cruiser in addition to being a practical supercar.

It’s not just the size, though. The M5 can have almost all of the same luxury features available on today’s BMW 7-Series. If it weren’t for the M-Badge and all the extra performance, the M5 would do just fine as an everyday luxury sedan. 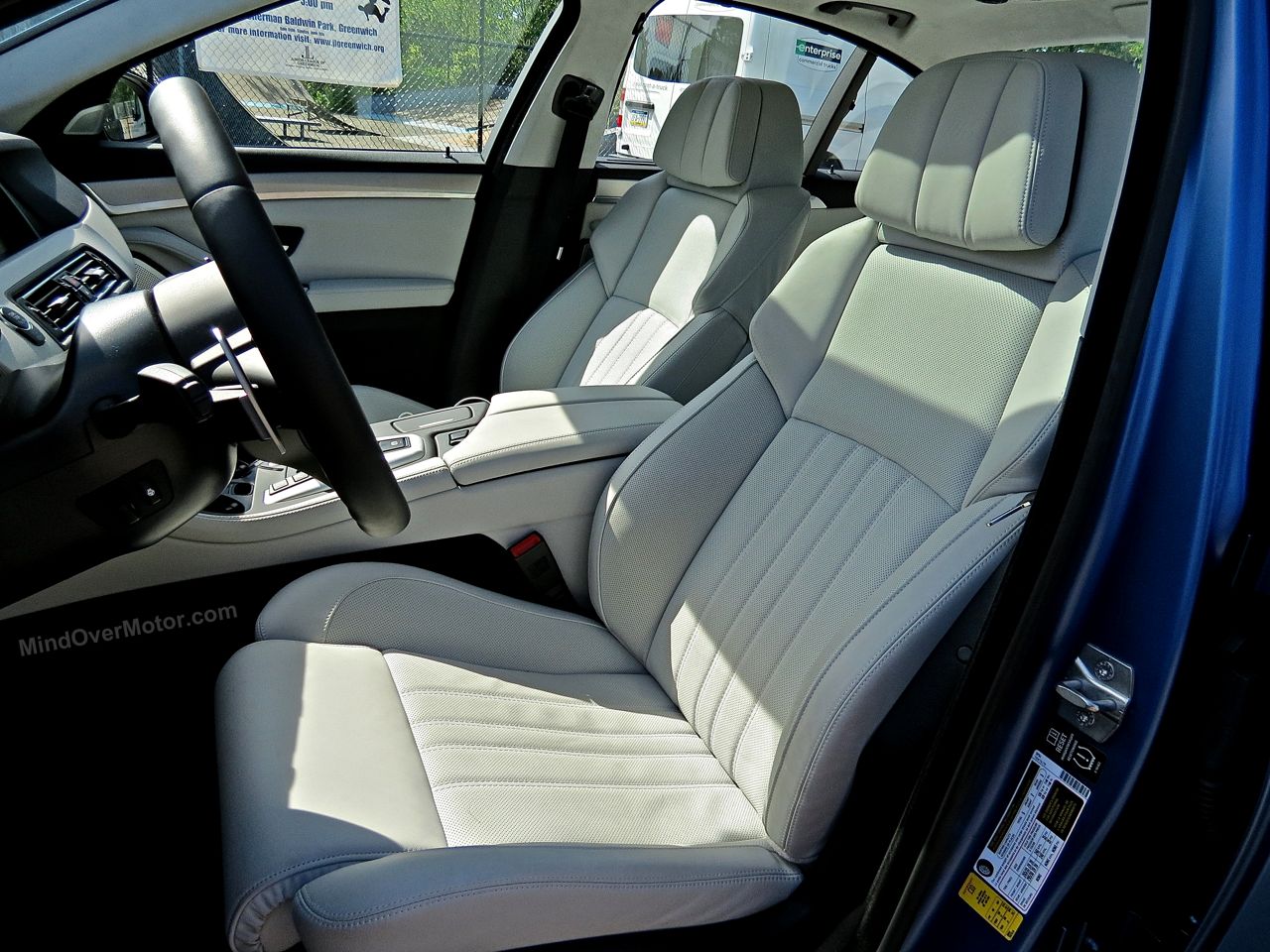 The Amount of Performance is Astounding

If you put someone who doesn’t know about cars behind the wheel of an M5, they will think it is just a really nice everyday car… until they need to accelerate with any vigor, at which point they will shit their pants.

The performance you expect from looking at the numbers, and the performance you actually get are on two different levels. 562hp is a lot of punch, but 4,500lbs is also a lot of weight to haul around. Needless to say, I was expecting Corvette sort of speed, and the M5 delivered Lamborghini sort of speed. I had driven a Gallardo a few weeks earlier, and no joke, this M5 was just as fast — with seating for 5, and all manner of plush luxury amenities on board.

Why was the M5 so much faster than I expected? Because BMW’s official horsepower claims are quite conservative. This thing might make 562hp on top of Mt. Kilimanjaro, but at sea level it’s making more like 650hp. Real world dyno tests don’t lie. 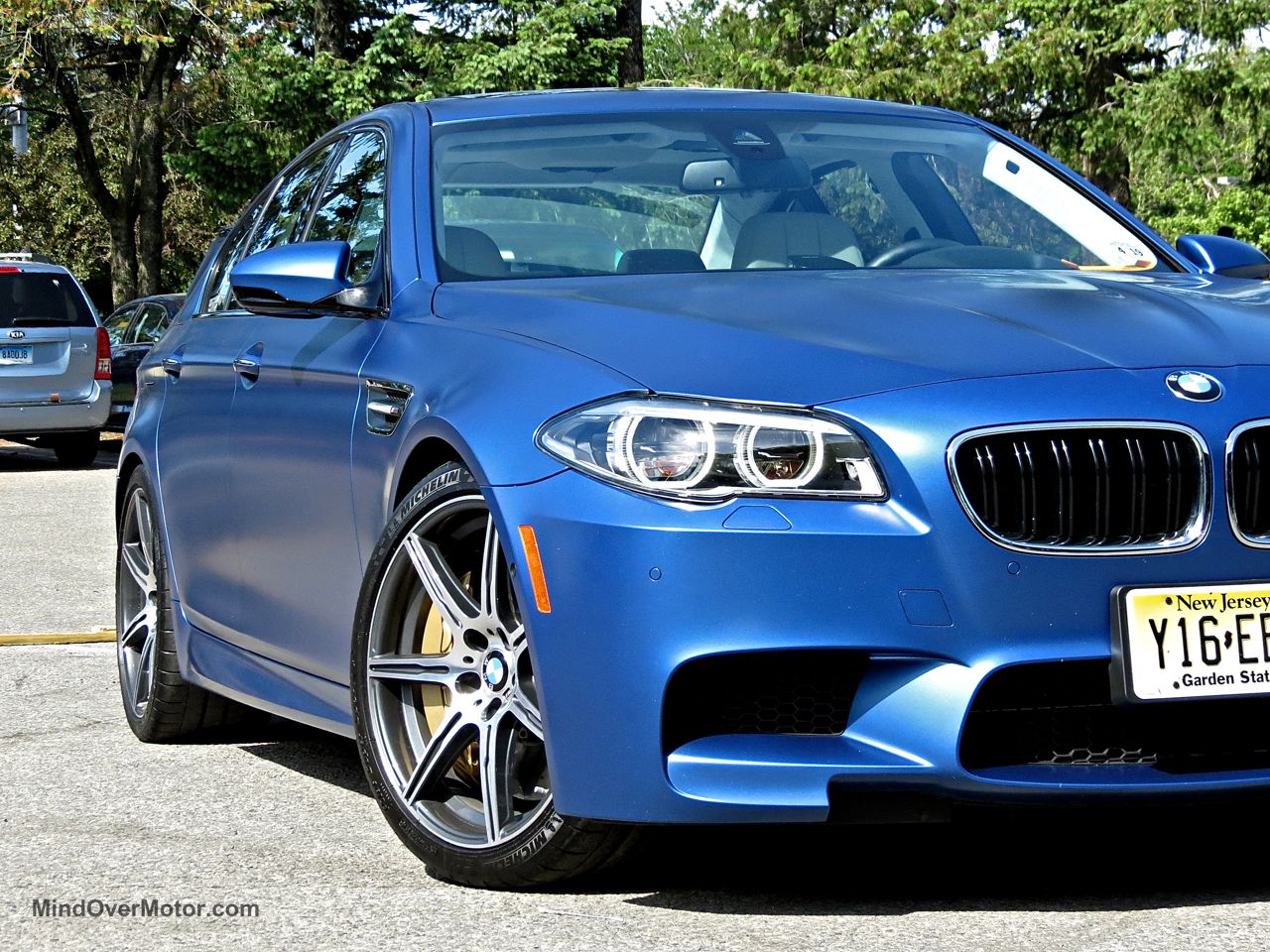 It’s Not Just Horsepower, Though

No, even despite it’s hefty weight, the F10 BMW M5 is still quite fun to throw around on a winding road. It’s steering is very lively and responsive feeling, quite surprising considering it looks like a boat.

I won’t for a second say that the M5 drives like a much smaller car, though, because it’s got nothing on a Porsche Panamera there. What the M5 does do is handle its heft very well. Like most big cars, you really need to set it up well on corner entry. But once you do it’s got plenty of grip and it stays pretty darn neutral for such a big girl as you push harder.

The M5 is definitely a competent handler, and it is definitely a lot of fun to rip some corners in. It also has some astounding braking power with the carbon-ceramics fitted… again, doing what shouldn’t be possible in a big luxurious cruiser.

I’m a purist at heart, and I love manual in most cars, but I’d take the dual-clutch gearbox every time in a big car like this. Compared to the 8 speed auto-equipped 650i I had been driving before the M5, the transmission is one of the biggest differences you can feel between them. The dual clutch just feels more direct and connected than the automatic does, and that ZF 8 speed is probably the best automatic around. The dual-clutch is just better, though, and it’s something you probably need to feel to understand. 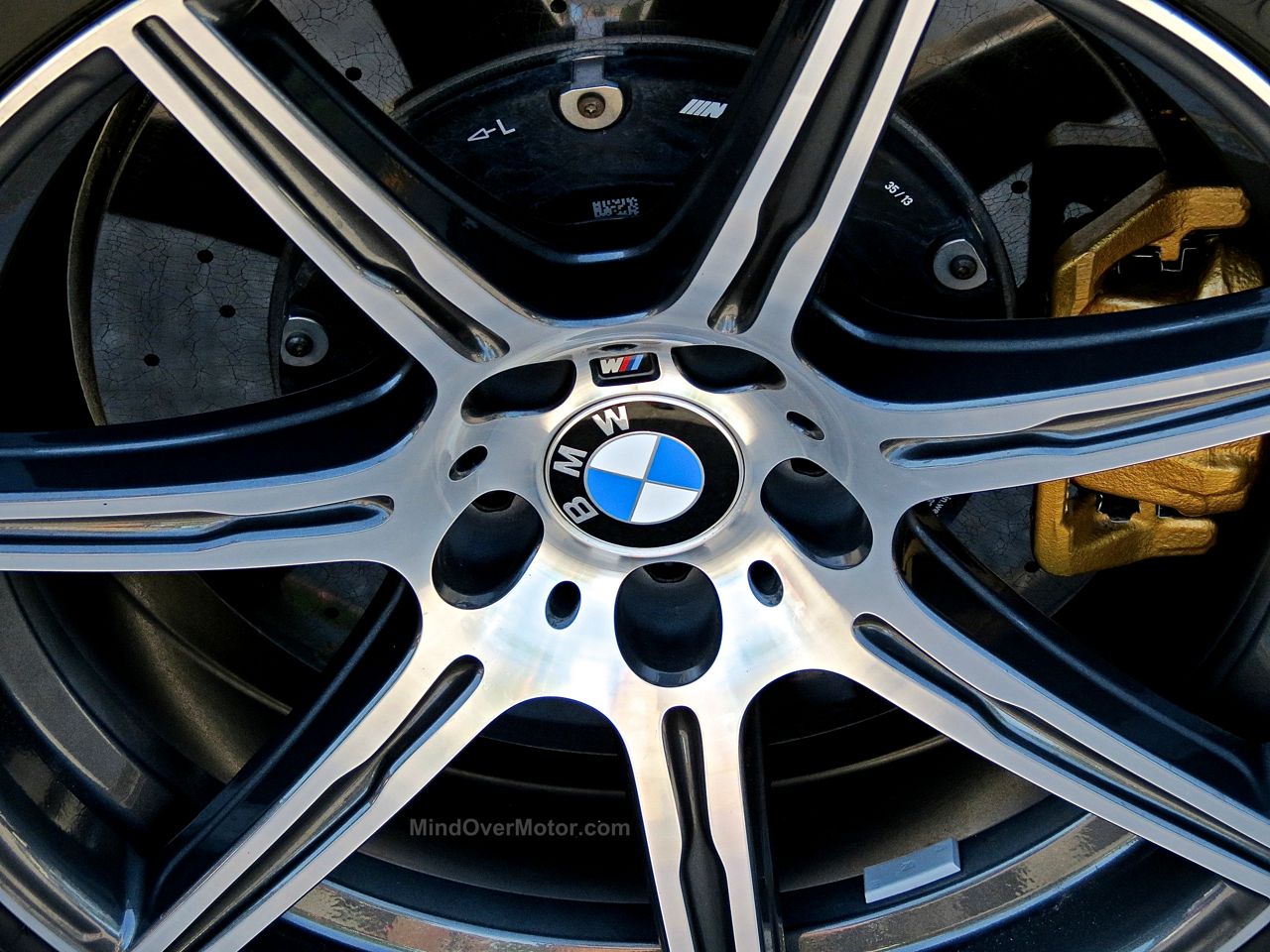 The Hefty Weight Still Bugs Me

While BMW did a great job making the M5 handle around 4,500lbs, there is no denying that it wouldn’t be faster and better if it weighed 400-500lbs less. The current 5-Series is based on the larger 7-Series chassis, though, so this may be the best they could do within reason.

While It is Fun, the M5 Isn’t the Driver’s Car It Once Was…

Making the M5 more of a luxury car comes with some compromises in driving dynamics. The F10 M5 is certainly a fun and rapid machine, but it is not going to please the purists like older M5s will. It’s handling is competent, but it isn’t sublimely balanced like it’s predecessors.

As I said earlier, the cars have changed over the years. Supercars are now more about high technology and ease of use than driving mastery and skill. The E39 BMW M5 came to us at the end of the era of analogue driver’s cars, and it will probably represent the pinnacle of its lineage from a purist’s point of view.

But the new F10 BMW M5 is still very much a true M5, just one that has evolved with the automobile as a whole. That comes with both benefits and drawbacks. 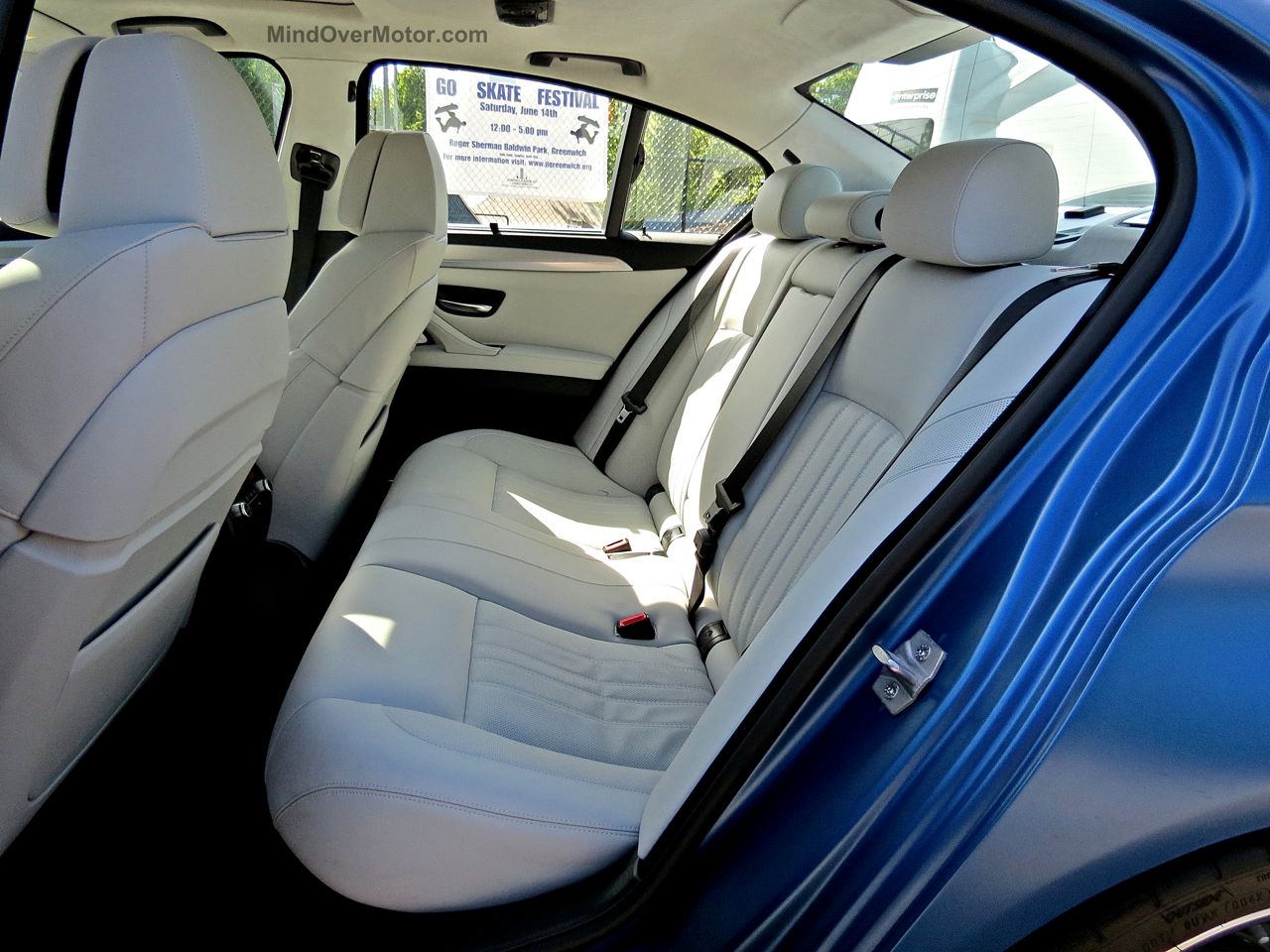 The Whole Fake Noise Thing Pisses Me Off

I’ll be honest, the fake engine noise coming through the speakers is pretty convincing if you forget it’s there. But anyone who know what a 4.4L V8 should sound like will never be satisfied. I’m all for active exhausts, and even engineered sounds from the exhaust pipes themselves (like Jaguar has). But on principle, I just don’t like the idea of fake noises in a car that should make so many great real noises.

Also, what will the fake engine noises be like when those speakers start to wear out in a few years? 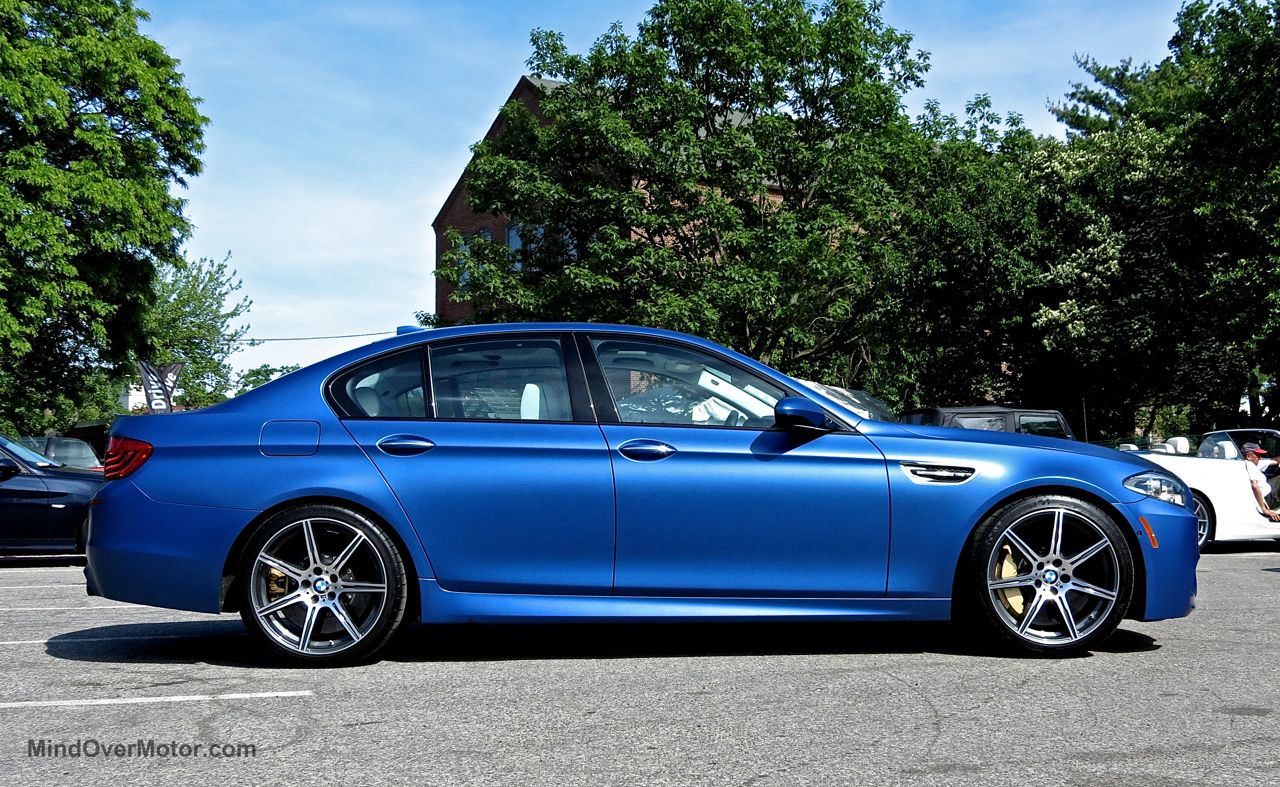 How Will It Make You Look?

To most people, you will look like any other person in a normal, everyday BMW. The M5 is a bit of a sleeper in that regard. A supercar that doesn’t draw supercar levels of attention.

Most car people can spot an M5 right away, though, so its sleeper status is limited at best when it comes to spontaneous contests of manhood on public highways.

Overall, the BMW M5 has that sort of Transporter / Hitman appeal, and I’m all about that. 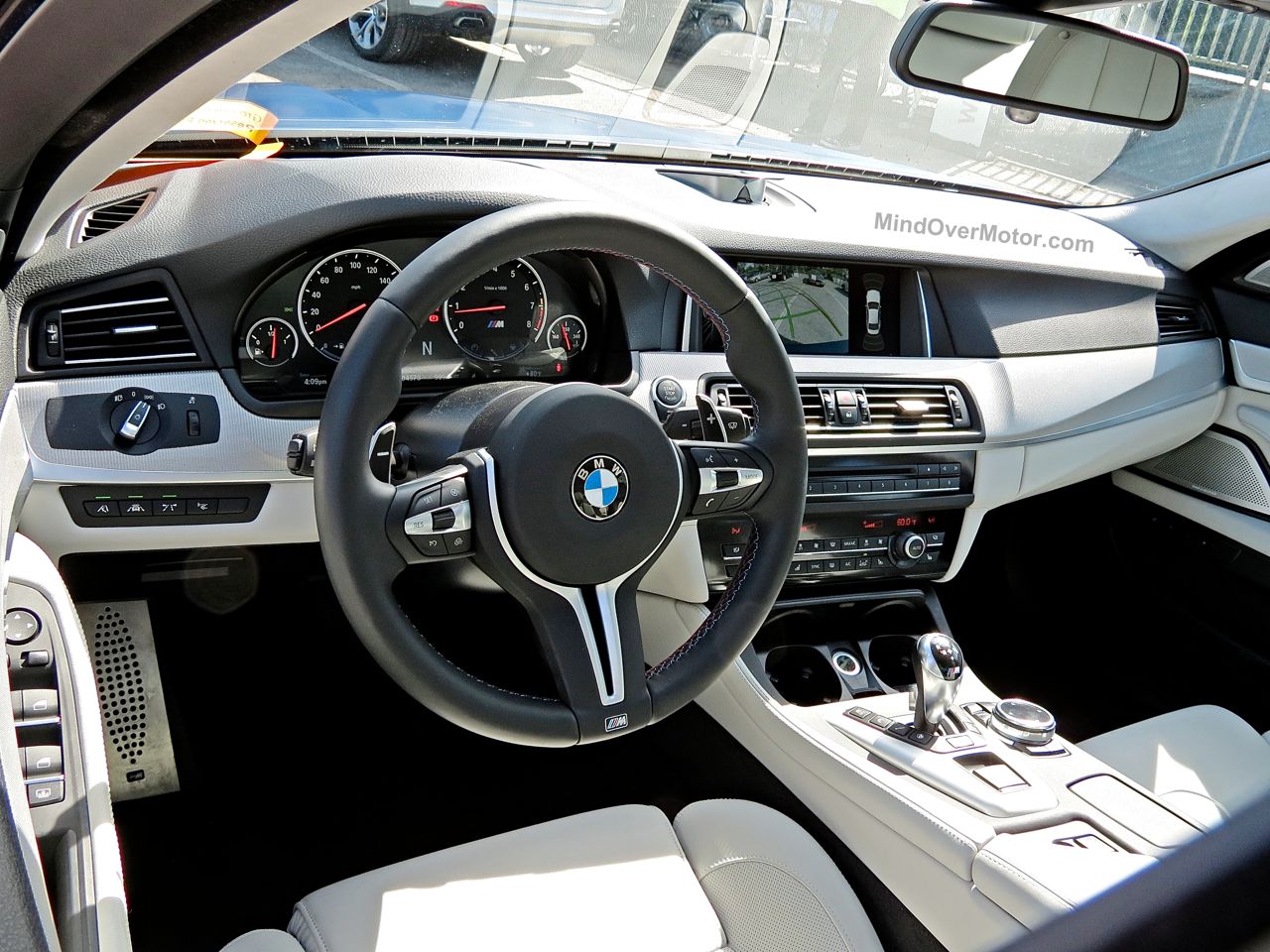 Like the Jaguar F-Type R Coupe I reviewed recently, the BMW M5 definitely gives you all of your $100k money’s worth. For the sort of buyer who would spend this much money on a car, the M5 does everything you could want it to do, and more. It’s surely money well spent.

The BMW M5 does have it’s rivals, though, and I consider most of them equals. You could go for an Audi RS7, Mercedes E63 AMG, Cadillac CTS-V, or a Jagaur XJ-R, or you could even stay with BMW and buy an M6 Gran Coupe. You can even ditch gasoline altogether and buy yourself a Tesla Model S P85D! They’re all really great cars, and all are well worth the money.

The cars that the M5, and company, really ruin things for are the vastly more expensive options. I really liked the Porsche Panamera Turbo S when I drove it, but it cost’s more than double the price of the M5 and is slower. The same can be said about the Aston Martin Rapide, and maybe even the Ferrari FF. So if you want supercar speed in a practical package, you’re wasting money if you spend more than $140k. 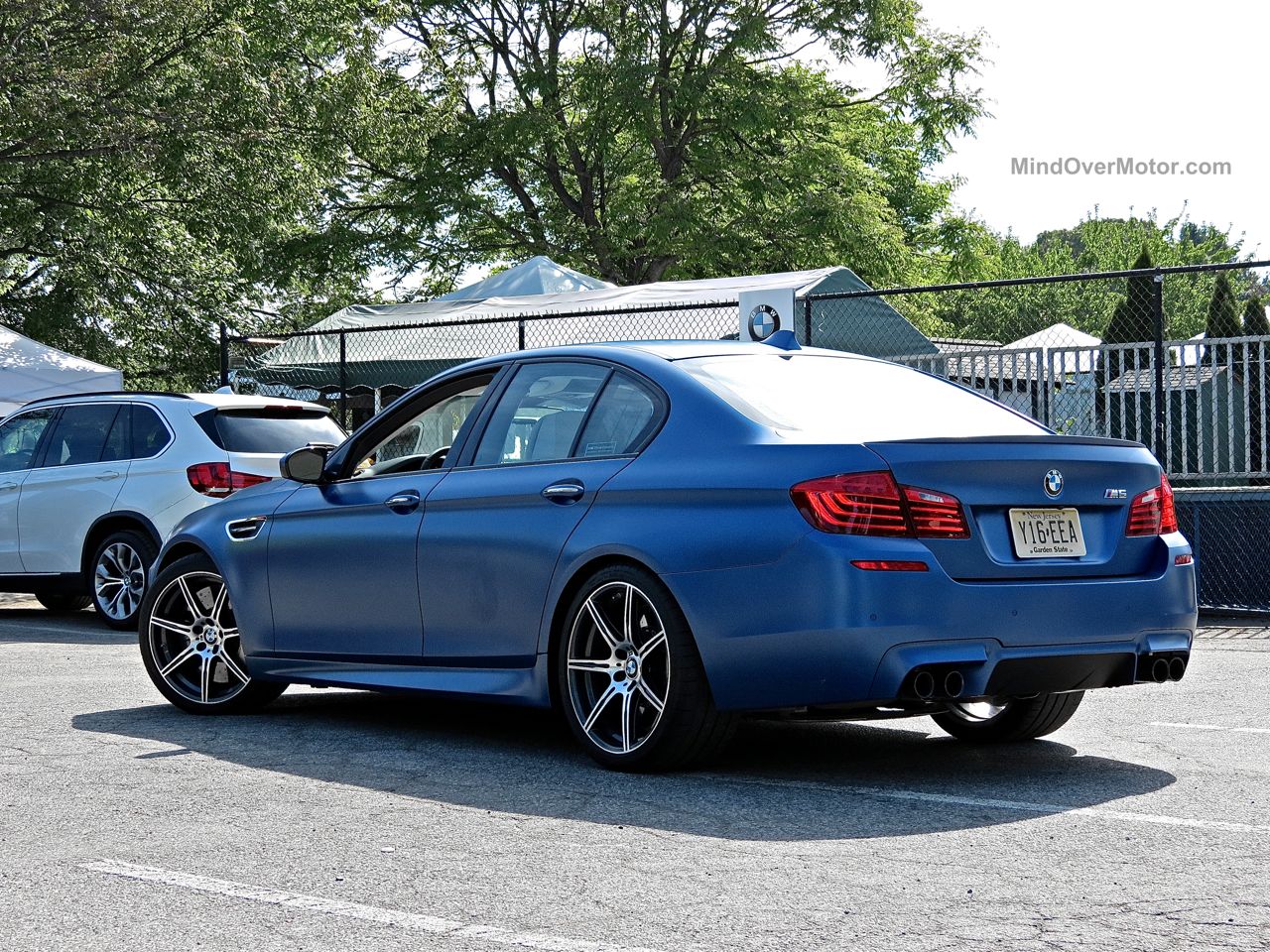 But what if you want the older-style BMW?

The F10 M5 isn’t your car. If the E39 M5 is something you lust after, then save a ton of money and buy yourself a mint-condition E39 BMW M5. Honestly, you will probably make money on it longer term, and you’ll save even more money in depreciation from not dropping six-figures on the new M5.

If you love the E39 M5, but want something similar that is newer, might I recommend the E90 BMW M3 (with a stick-shift, of course). It has a splendid 4.0L V8, and is a little lighter than the old M5.

If you still find yourself wanting a brand new car, I’d recommend buying the current BMW M3 (which is a sedan). It’s definitely a new-age digital driving experience, but it weighs close to 1000 lbs less than the M5, and has close to 500hp bone stock (as per actual tests). You can have the current M3 with either a manual, or the same wonderful dual-clutch found in the M5. I’d have to try both to decide, personally. 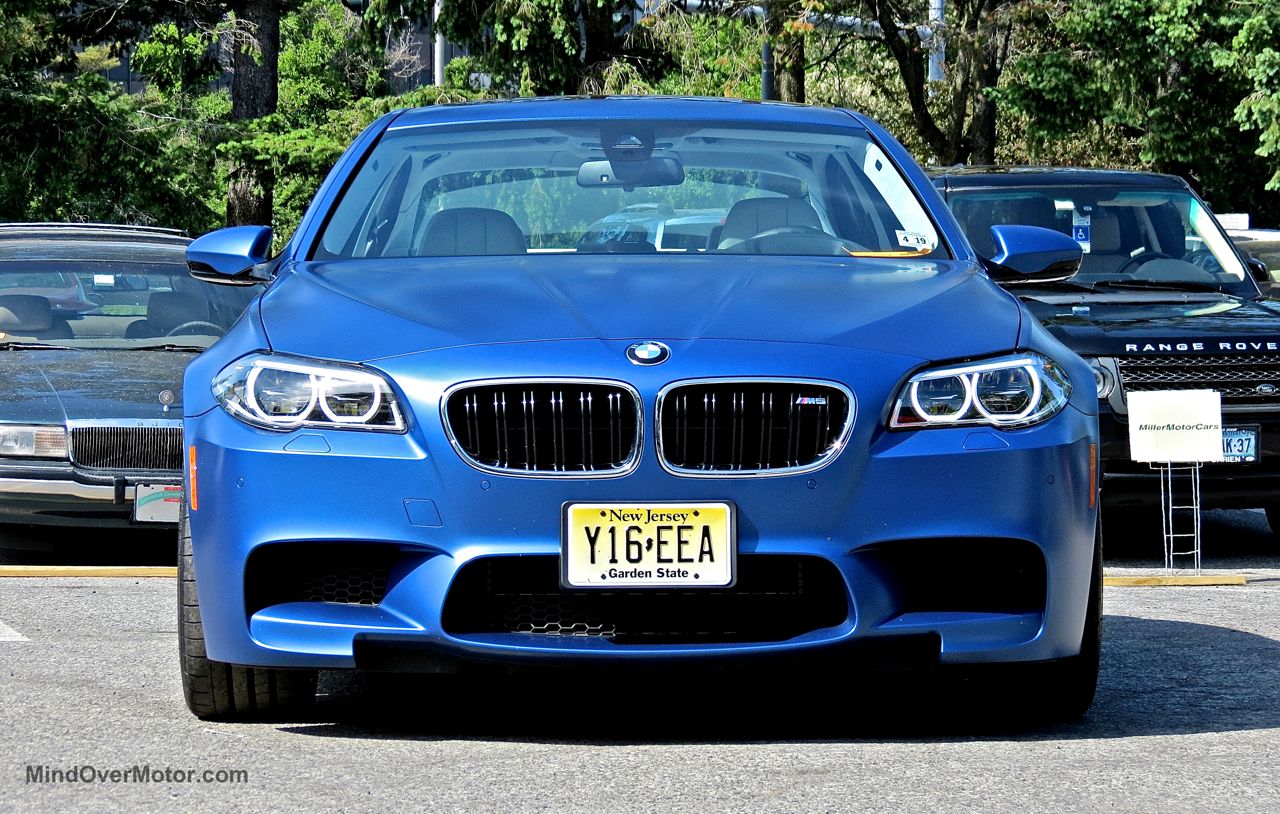 So the new F10 BMW M5 is the most well-rounded M5 yet. It has more luxury than ever before, while still being able to run with the exotic supercars of the day. But the M5 separates itself from those supercars in that it is an actual, useable car. You could daily drive a BMW M5 and make no practical sacrifices whatsoever. A Lamborghini, on the other hand, is more of a toy, and not really about practical transportation at all. In many ways exotic supercars aren’t “cars” in the proper transportation sense at all, but more of an off-shoot art form.
That is why I have to give the M5 so many props, and why I felt I had to ask the question of, “Is the BMW M5 the epitome of the modern automobile?” Because it can do everything those artsy exotics will do, and still function as an everyday mode of transport, I think it meets a higher standard in many regards.

So for the automobile, overall, I think the M5, and it’s direct rivals, do in many ways mark the high point of automotive evolution thus far.

It’s one thing to be able to go fast in a light, sleek sports car. But one could argue it’s even more impressive to be able to go fast with four other people in the car, their bags in the trunk, while everyone is listening to music, watching TV, and posting to social media at the same time, and all in sublime comfort.

Look, I love the purist experience as much as any other car enthusiast, but there’s no denying that a car like this M5 is damn impressive, and quite desirable on a multitude of levels.