So VW have decided the Golf R should come to the US market. The R is basically an up market GTI with AWD and more power, around 265hp on the European models. It is being marketed in the same league as the Subaru STi and the Mitsubishi Evo but offers much more luxury and quality but slacks on performance by comparison. Those of you who play Forza Motorsort 3 may already know about the R and what it brings to the table.

I have to say, like the R32, this car just doesn’t compete with the Japanese rally cars in performance at all. It seems to be in the same league as the Sti and Evo’s baby brothers, the WRX and Ralliart, when it comes to performance but they’re going to charge the same price as the big bros. So why buy the R then? Well, what it does have going for it is that it has all of that German build quality, nice materials, and a beautiful interior, all things that the Sti and evo lack by comparison. So in a way you could say it’s the more “grown up” alternative in this price range. Also, VW has decided to offer it here in the US exclusively with a manual transmission, something they forgot to do with the last generation Golf R32.

People who go on and on about this car’s “inferior” performance are missing the point in my opinion, because this car is still going to be quite fun and I’m sure it will haul its share of ass. The R is for people who want the entire package with the German quality and luxury that so many people desire, and in that regard this car is a bargain. The rally cars are more for people who put performance over everything else, but still need a practical car (like myself). The Golf R is all of that but is also more refined, and for many of the people spending $40k on a car like this that sort of thing does matter. So I definitely do see a spot in the market for the Golf R, I may even look at it myself second hand in a few years. And for those of you who are “ehh” about the lower power numbers, it is the 2.0T so there will be some nice gains to be had off of basic modifications I am certain. I imagine one of these with 300-330whp would be fantastic.

The Golf R has my stamp of approval and it can’t get here soon enough. 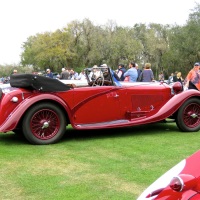