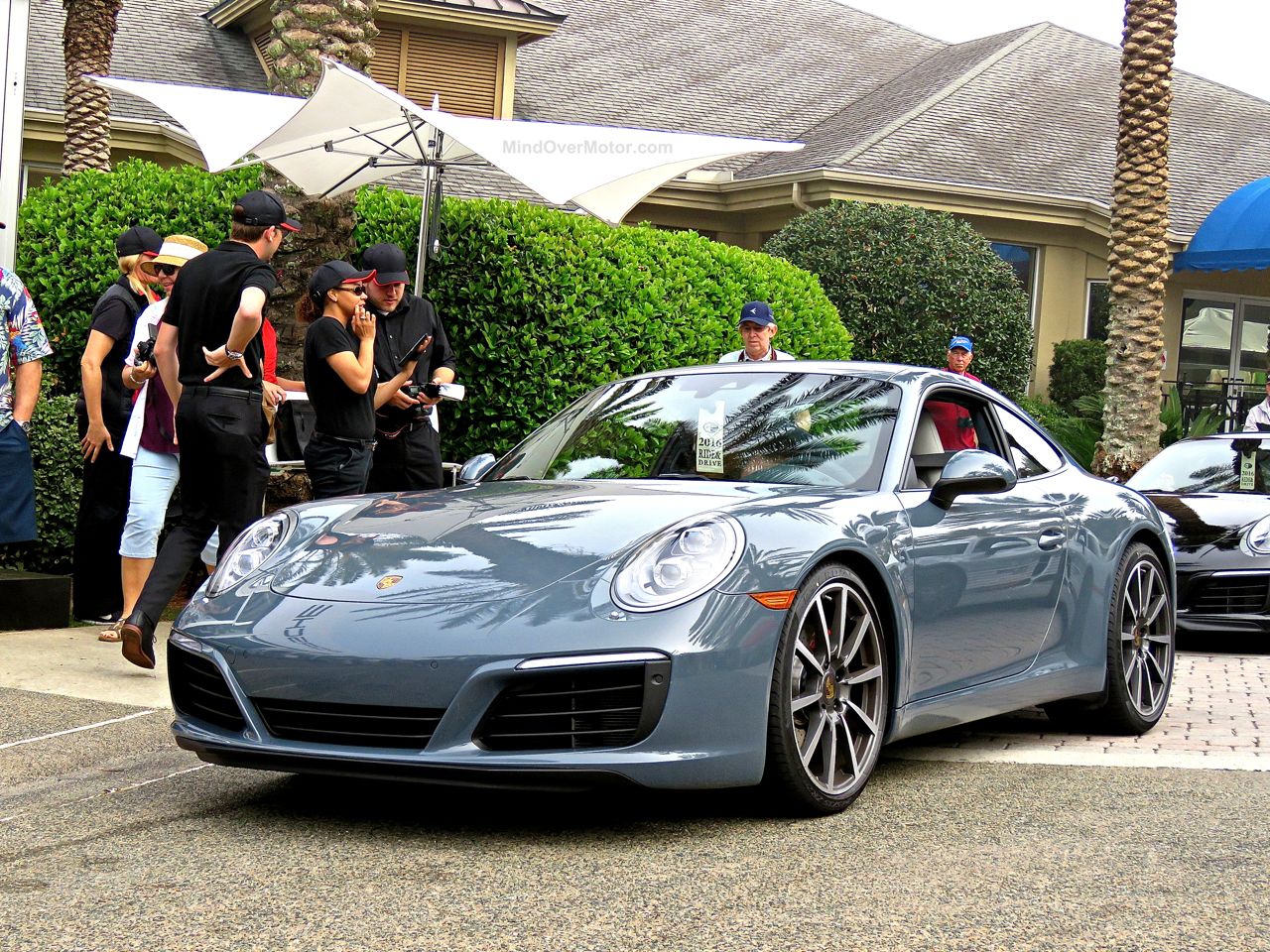 Everyone sharpen your pitchforks and light your torches! Porsche has gone and changed the 911 again, and this time we’re gonna burn Stuttgart to the ground! They won’t get a way with it this time!

Wait, what? What’s that you say? Porsche has turbocharged all of the 911 Carrera models, and now they’re actually improved? You say Porsche has secretly answered our purist prayers and we don’t even know it? How can that be?!!!!

Well it’s true, folks, all of it. Porsche has made all of their 911s into 911 Turbos, although they’ll surely hate me for saying it that way. The way Porsche would want me to say it is, “911 Carrera and Targa models all now have a 3.0L Twin Turbocharged Flat-Six engine, but they are not “911 Turbos” because the 911 Turbo and 911 Turbo S each have a 3.8L Twin Turbocharged Flat-Six engine.” See what I mean?

There are a few ways to look at this new 991.2 generation Porsche 911. I’m going to go through the way I see the car now, after taking it for a spin recently.

I’m not going to waste our time talking much about the aspects of the 911 that haven’t changed much. Just know that it’s still a wonderful handling car, it still has the best electric power steering in the business, it’s still of top-notch build quality, and PDK is still among the best dual-clutch trannies around.

Alright, now let’s talk about that new turbocharged engine, and what it does for the 911 as a car… 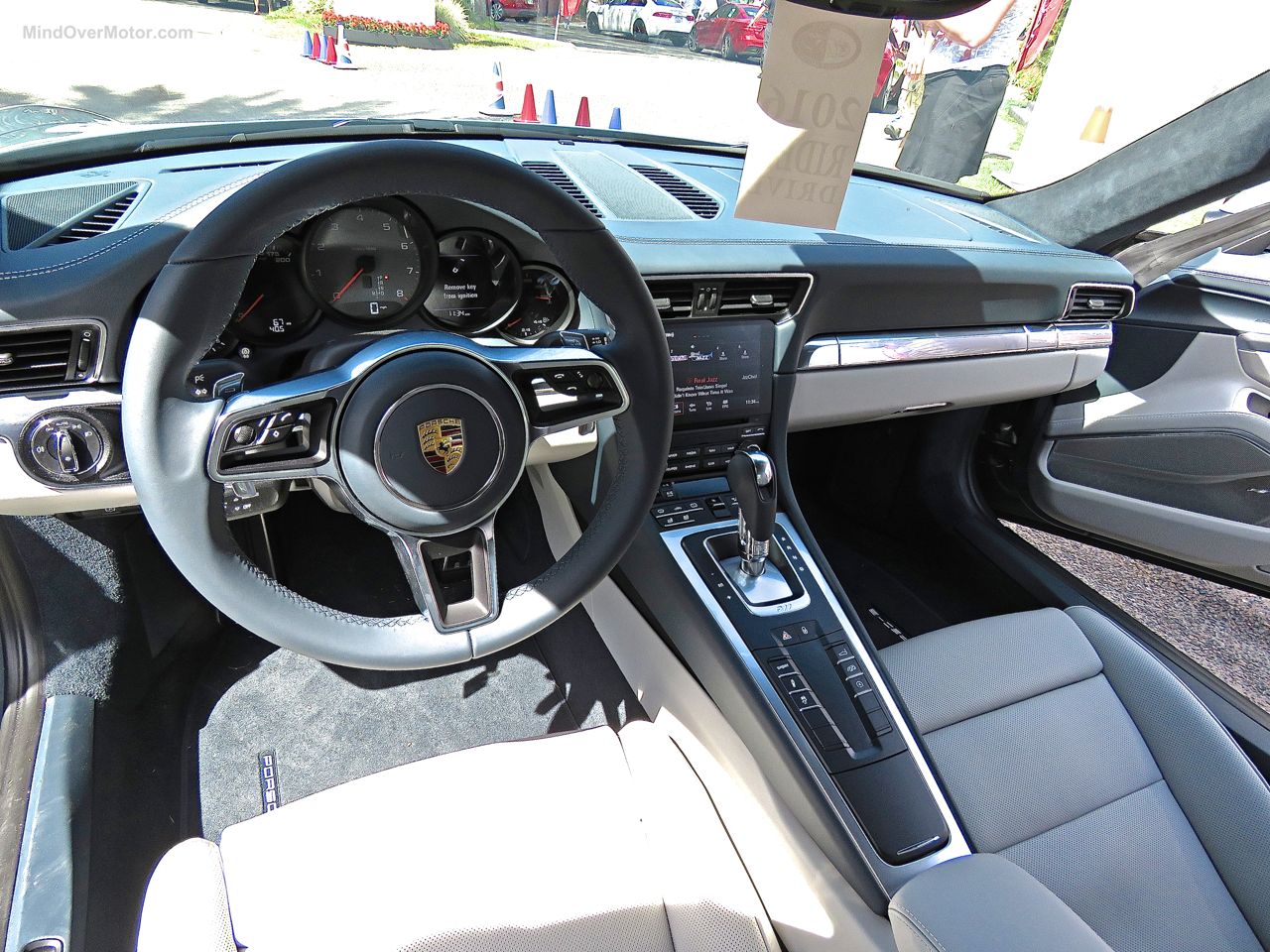 The car I drove was a fairly lightly-optioned 911 Carrera S with PDK. It at least had proper paddle shifters though, instead of those stupid push buttons they put on the steering wheel of most base models.

The big takeaway is the massive amount of mid-range performance unlocked in the new 991.2 Carrera S over the old 991.1 Carrera 4S I drove a while back. There is a ton of torque ready to heave the car forward anywhere north of 2,500 RPM, and that means you don’t have to wait for the revs to climb to get moving quite quickly.

I remember the 991.1 Carrera 4S I drove had the Carrera S Power Kit on it, and it really came alive above 5,000 RPM. This 991.2 Carrera S would be long-gone by that time, though, pulling hard off into the distance ahead. Even though peak horsepower hasn’t increased drastically, there is so much more usable performance available, it’s not even funny. There’s just a tiny bit of spool time when you hit the throttle, and BOOM you’re hauling ass. What’s more, in 4th or 5th gear, you can do all of that without topping that same 5,000 RPM mark. 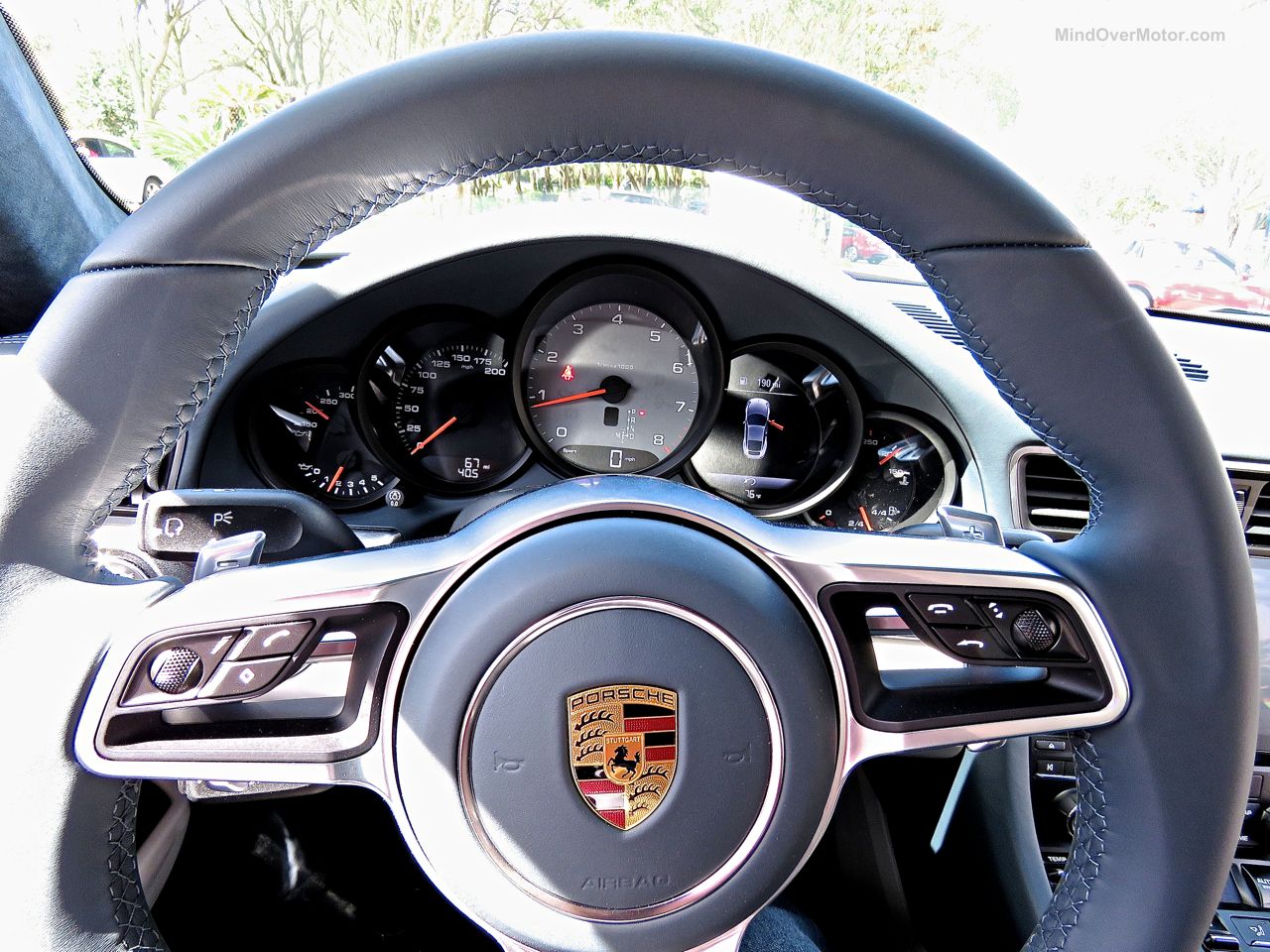 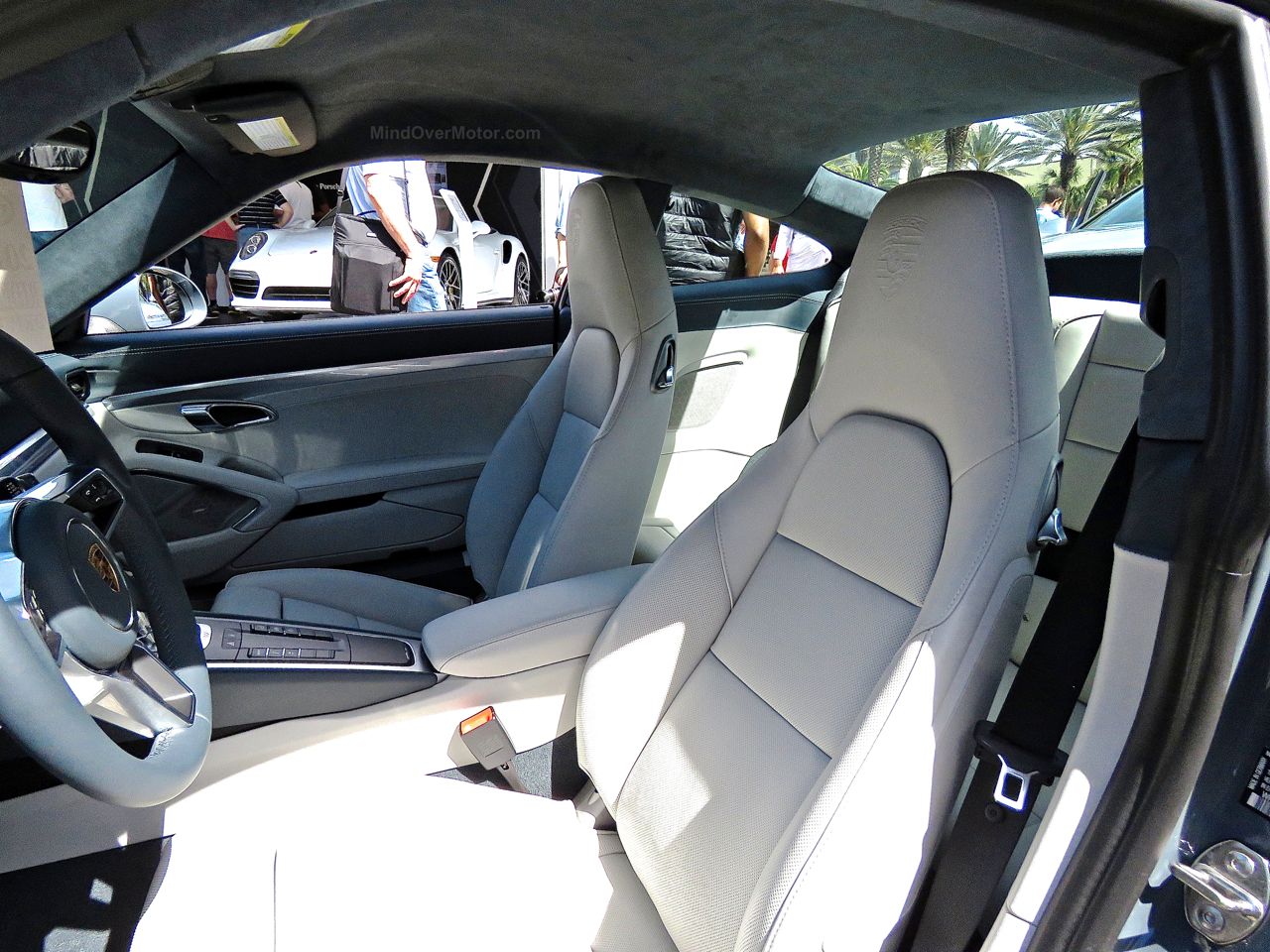 I can hear Porsche purists grumbling about revving, sounds, and emotion right now. They shouldn’t complain too much, though, because the turbo Carrera S still redlines at a healthy 7,400 RPM. I mean, they’ve hardly turned it into a diesel truck, and it actually still sounds great, if just a little more muffled than the old car.

All in all, I’d say Porsche has maybe traded 10% of the car’s character for another 50% worth of usable, real world performance. That’s quite a worthy trade in my mind, and I’m usually one of the “purists” who complains when Porsche makes changes. The fact of the matter is that the old 911 was only fun at mid and high revs. This new turbo 911 is fun at low revs, fun at high revs, and fun everywhere in between. That’s more fun to be had, and that means it’s just better. 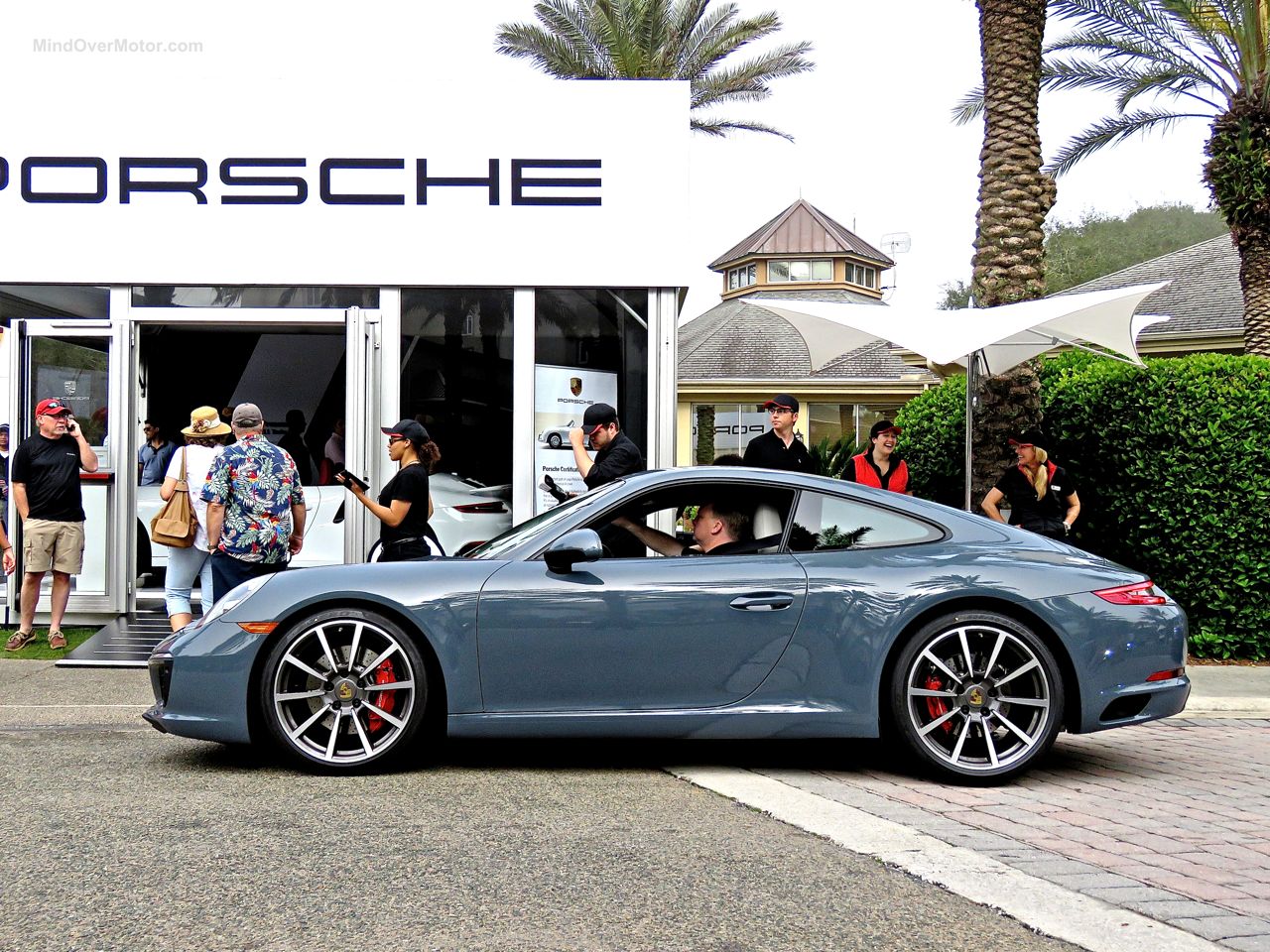 The turbo Carrera in context

The Porsche 911 has been one of the world’s definitive sports cars for over 50 years, and this is the next big step. 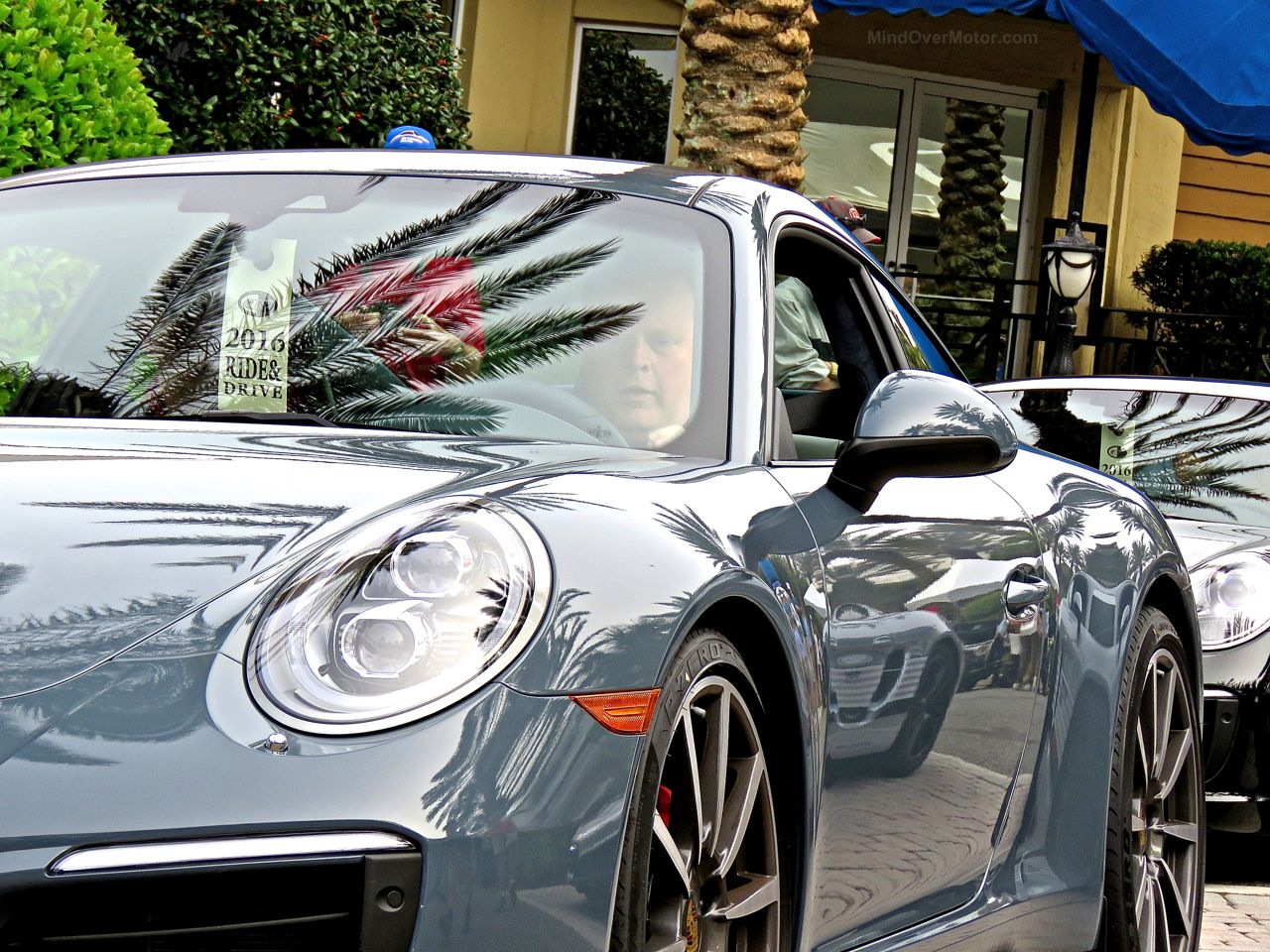 I mean, sure, 420hp is a lot of fun in a car that weighs under 3,200lbs, and that may be more than enough for most people. But what about 500hp in the same car? Or how about 550, or 600hp? That’s what really sounds right to me, and guess what… it should be totally possible.

Porsche has been making some of the highest quality cars in the industry lately. So it’s reasonable to assume that their cars are built within the same conservative tolerances as other VW Group products. If that is the case, then it should be quite easy to add 100-150hp to the 991.2 Carrera S with some basic aftermarket upgrades and tuning. As long as the stock turbos are up for it, flow-wise, I think 550bhp should be totally do-able with basic bolt-on mods.

Chassis dyno tests of stock 991.2 Carrera Ss are showing around 380hp at the rear wheels, and matching torque figures, which suggests she has a some room to play with. It also shows that Porsche has slightly underrated the new Carrera S at “420hp.” The dyno shows the engine is closer to 450hp, or so. That means, topping the 500hp mark at the engine should be a pretty easy affair, being only around a 12.5% increase. 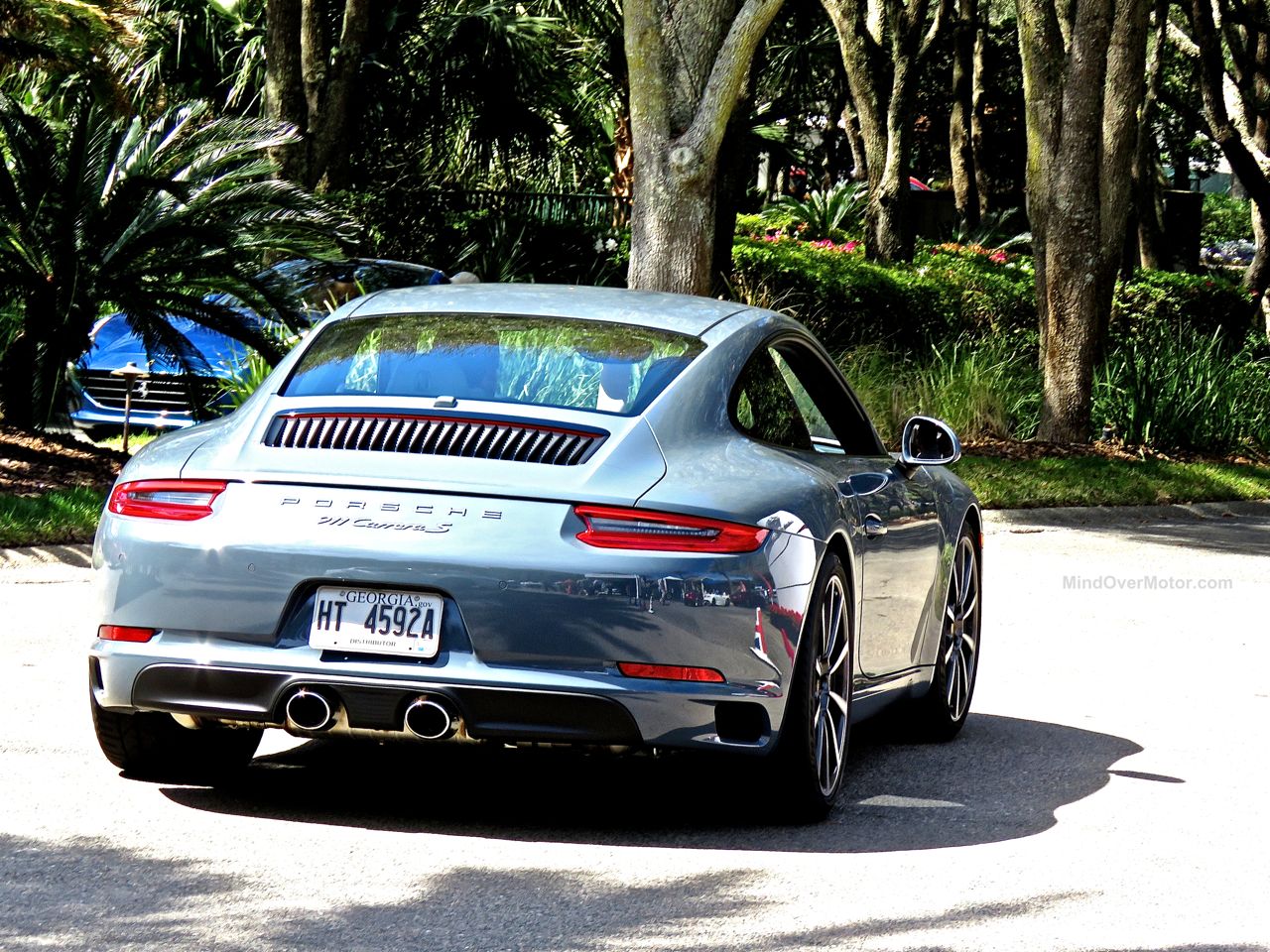 The answered prayer of the purist Porsche driver?

Bear with me here. Consider the current 911 Turbo and Turbo S, with 540bhp and 580bhp, respectively. Yea, they’re fast as hell, but they each only come in AWD and you are forced to have a PDK gearbox, which I’ve said before is like a great omelette without any cheese. (I know your heart just sank a little)

If 550hp winds up actually being feasible with bolt-on mods in this new Carrera S, then that puts it right in the “true” 911 Turbo’s neighborhood. The catch is, now you can be there with RWD, a clutch pedal, and a much bigger smile on your face. After all, omelettes are always better with lots of cheese!

What’s more, the 911 Turbo models weigh over 3,600 lbs with their heavy AWD drivetrains and PDK gearboxes. The manual RWD 991.2 Carrera S is over 400lbs lighter!

As a driving enthusiast, the thought of a 550hp modded Carrera S with a manual and RWD excites me tremendously. I’ve driven a 997 Turbo S, and it was very cool, and obscenely fast. But for a car to actually have in my garage on a daily basis, I really want to row my own gears and be able to wag the car’s tail around at will. Life is just more fun that way. 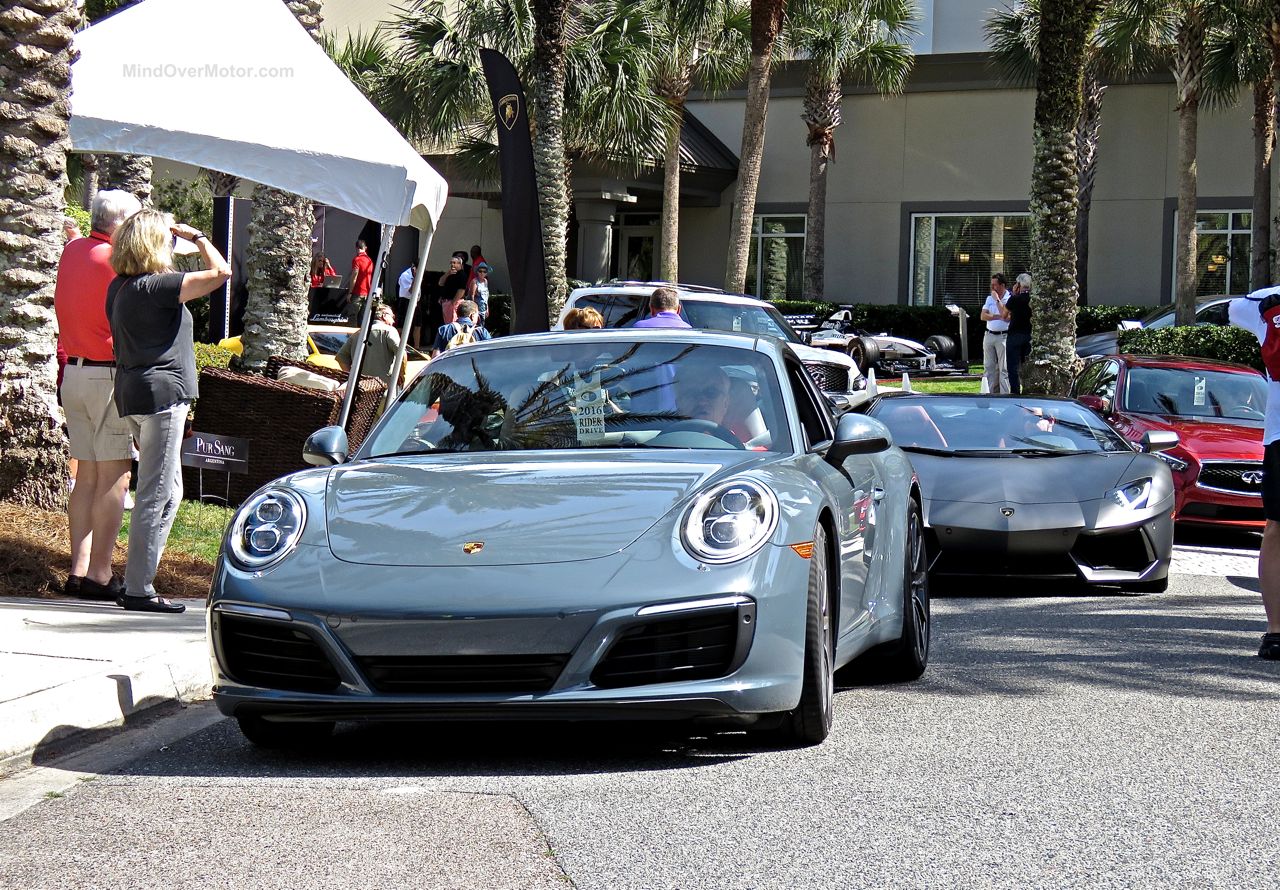 I priced out similar modifications needed for a 991 Turbo, and found that a budget of $15,000 should probably get you everything you need. Specifically that’s Exhaust, Intake, Intercoolers and a tune. Your prices will vary, but that’s a decent ballpark figure to go by. 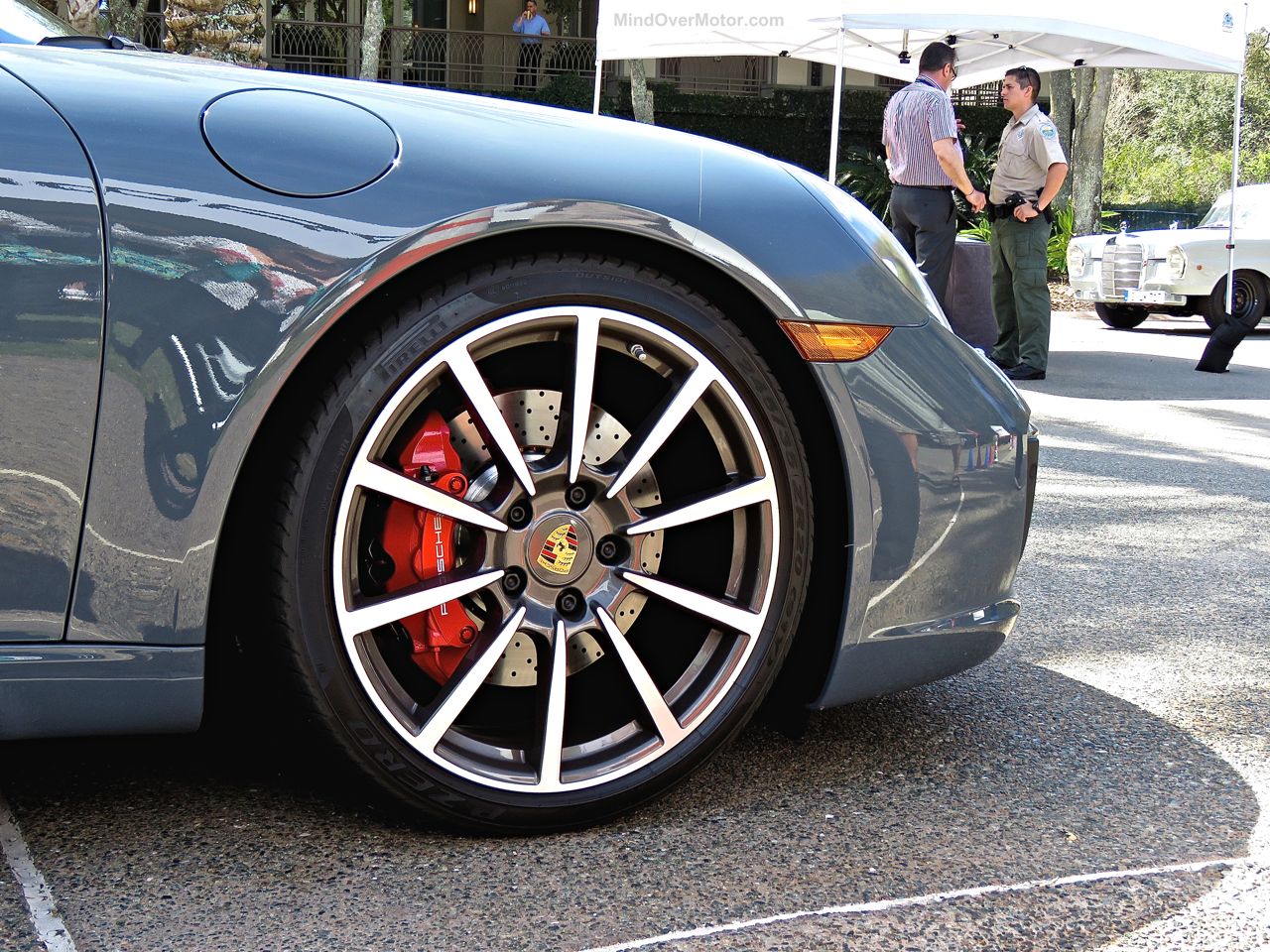 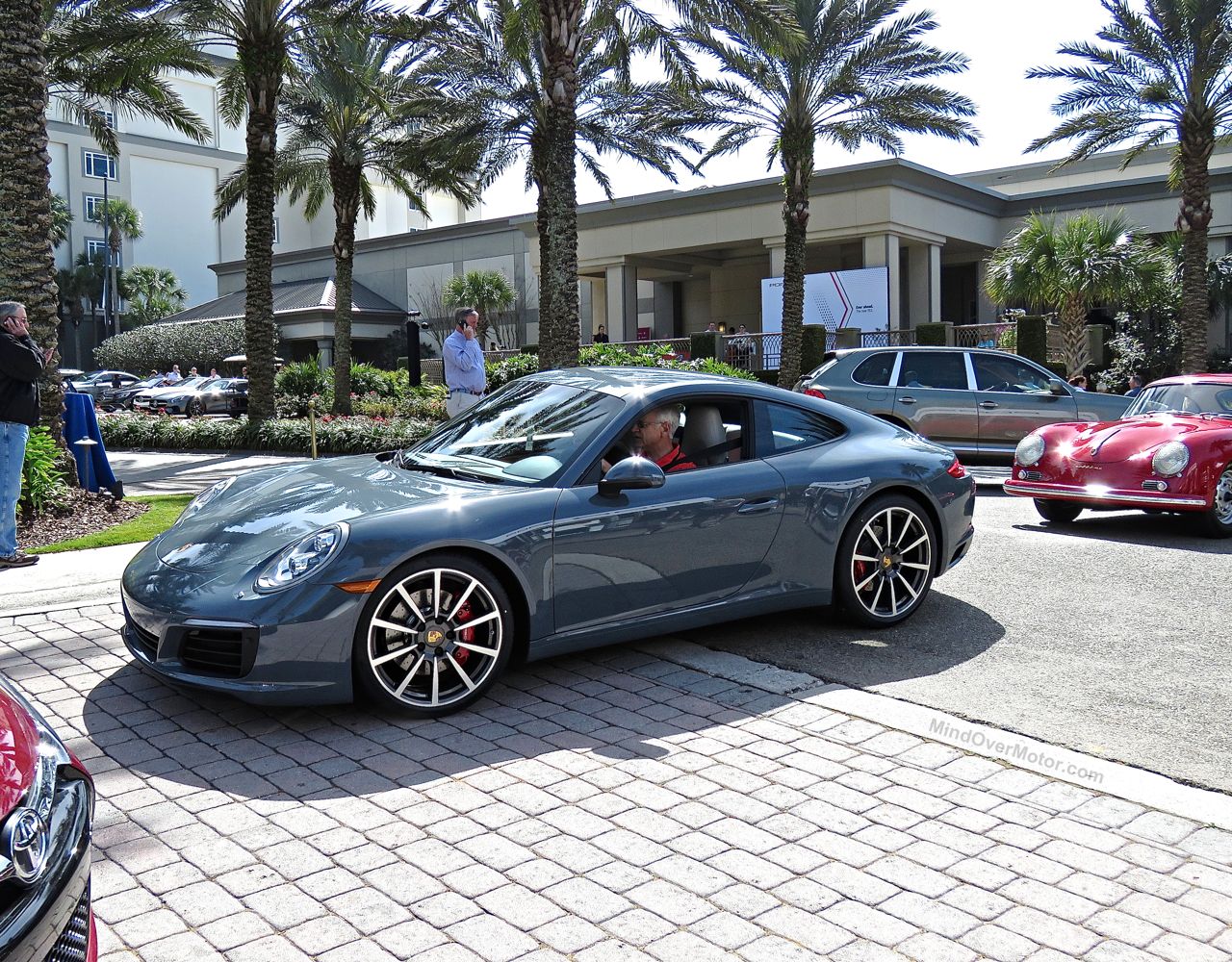 Furthermore, as far as non-Porsche options for the same money, it’s very slim pickins if you want a lightweight manual car. You’d probably have to look at the used market because everything new has paddle shifter these days.

For Porsche purists, the Carrera S may really be “the” car to have. I mean, I love the 911R, but it’s a pipe dream, and was never actually going to sell for under $200,000. Porsche says the new 991.2 GT3 will have a manual, and that’s great, but its different. If you want the full turbocharged widow-maker 911 experience, it’s either a modded Carrera S or the upcoming 991.2 GT2, which will likely be PDK only and very expensive. Meanwhile the 991.2 Carrera S is attainable, and aftermarket upgrades will surely be available soon.

It may not be the ultimate 911 in terms of image, but when I look at the 991.2 Carrera S in this light, I see the 911 I actually want to own and enjoy driving in real life. 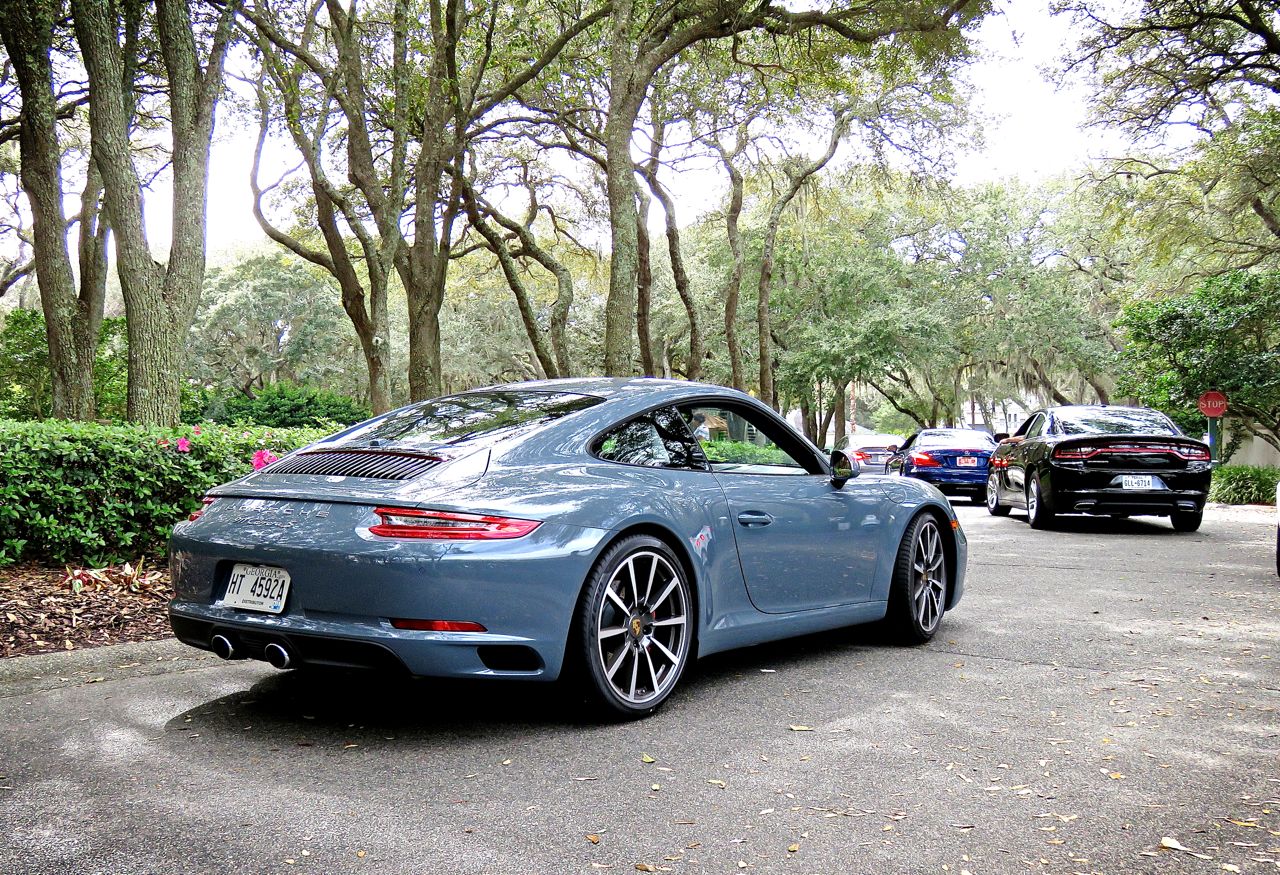 It’s kind of crazy to think, but the turbo Carrera S may actually be the best 911 for everyone who can’t just drop many hundreds of thousands of dollars on one of the 911 unicorn models (RS 4.0, 911R, GT2 RS, etc).

If even “only” 500hp with bolt-on mods winds up being realistic, I can still say without question that I’d rather have one of these than any of the actual 911 Turbo models. Lighter weight and manual shifts mean far more to me than going 0-60 in 2.6 seconds.

I think the new turbo engines are an improvement for the 911. Even if you don’t intend to modify it, the car just has so much more performance on tap, and it didn’t lose much in the way of character for it. If anything it may even sound a little more like an old air-cooled 911 than it’s naturally aspirated predecessors.

I definitely don’t want every Porsche 911 to go turbo; the GT3 needs a howling N/A flat six to be sure. But for the more pedestrian Carrera models, I think the additional, real-world-usable performance adds a lot of value to the 911.

The 991.2 Carrera S is wonderful stock, but mods should be able to make it magnificent. For all intents and purposes, it’s a proper 911 Turbo in everything but name.