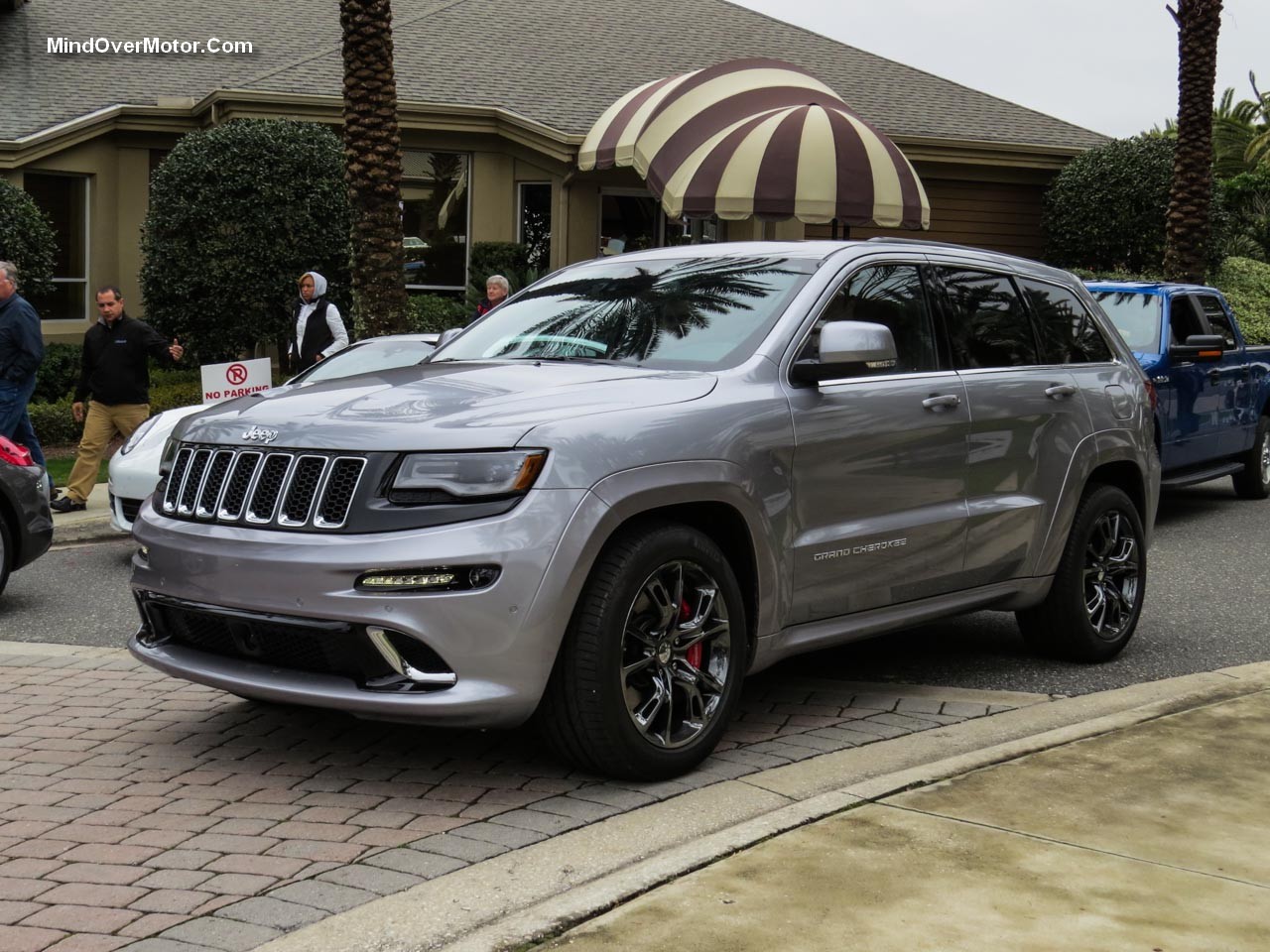 Out at Amelia Island, ride and drives last year were few and far between.  Luckily for me, SRT was there and proudly offering a few cars to test.  The Chrysler 300 SRT was available, but as most of our readers know, I tested that last summer and found it underwhelming.  On Nick’s persistent recommendation, I took the the other option they had, this Billet Silver Metallic Grand Cherokee and asked myself this question: What makes this better than the Chrysler, and what elements does this vehicle have that I want to see in others?  The surprisingly substantial drive I took allowed me to answer more than just those questions. 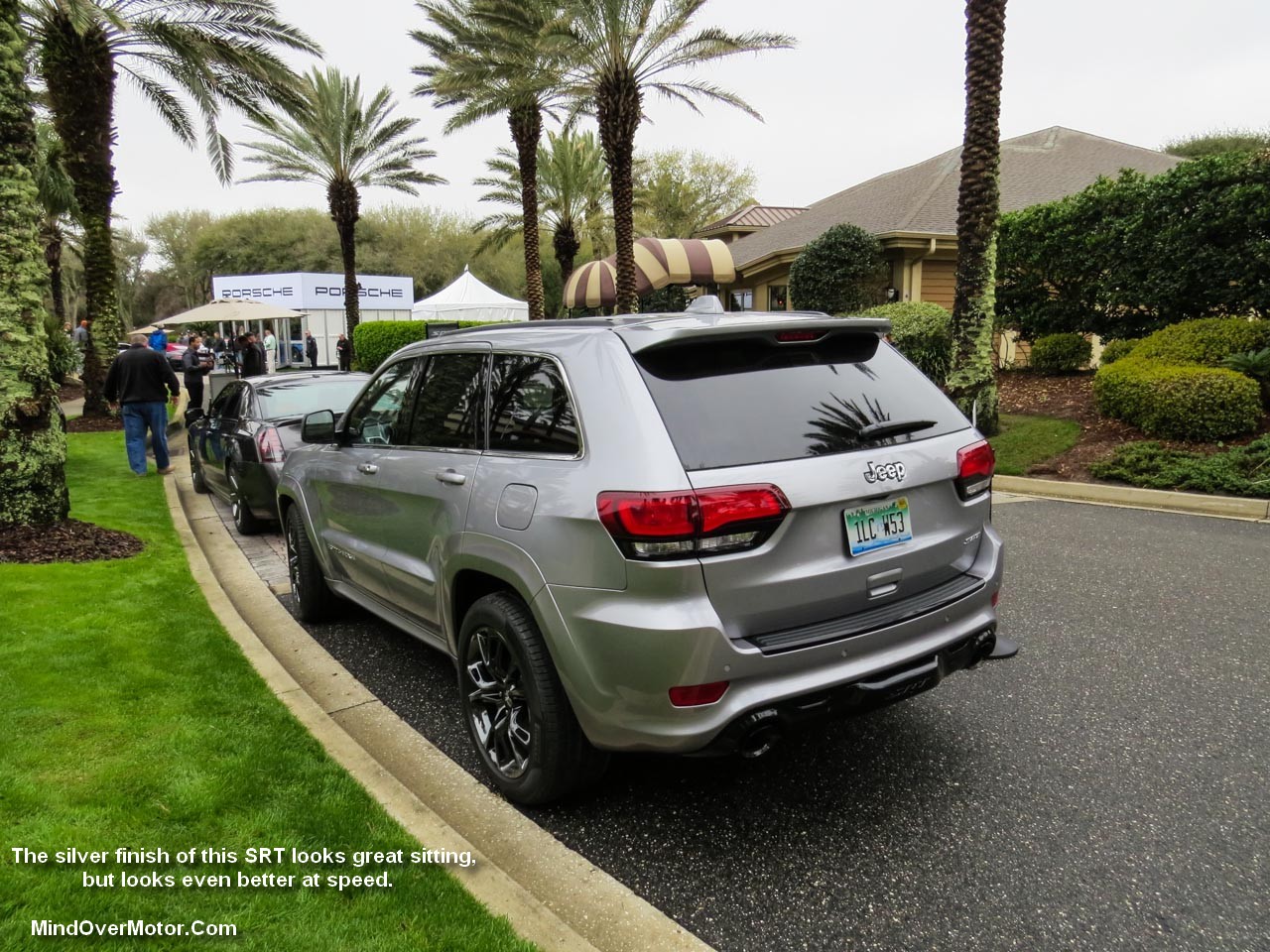 The current-gen Grand Cherokee looks a lot better than previous generations, but the SRT trim turns up the heat.  The standard front end is augmented by dark-finish headlight buckets, body-color trim, and black chrome on the grille.  The power dome hood looks great and adds depth the the front stance.  The husky fender flares look seriously badass, while the distinct lack of shiny chrome on the silver-finished lines contributes nothing but a sinister feel to the entire package.  Finishing off with the black-finished wheels on my test car, and I was already figuring out that this was no ordinary Jeep.  The rear is similar to the standard Grand, but with body-color trim everywhere and low-cut bumpers, providing an aggressive appearance. 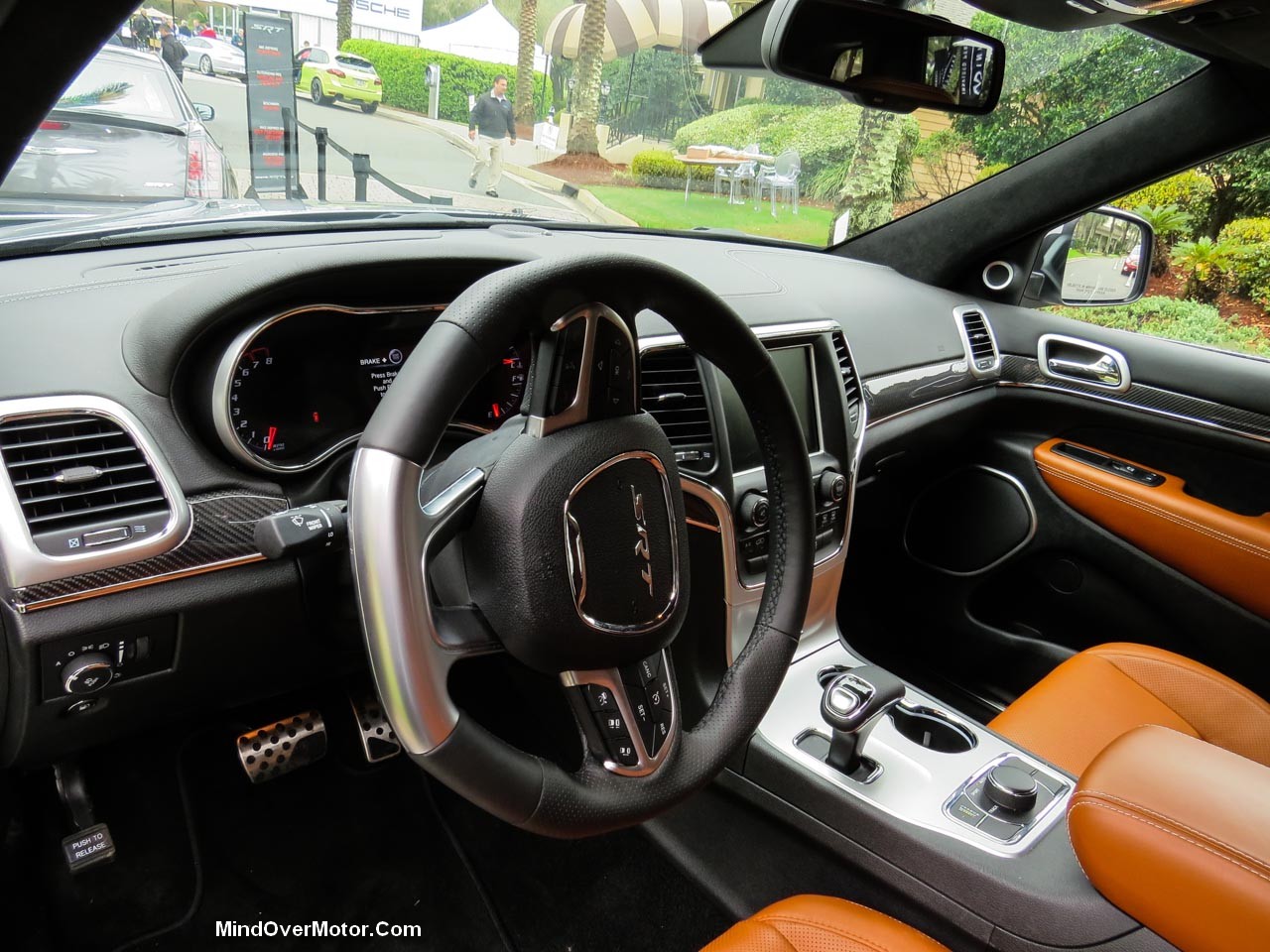 The interior looks like a big step up from the older models, with its softer leather and carbon-fiber trim adorning the dashboard.  The flat-bottom steering wheel is a great touch and implies this truck’s performance intentions.  The paddle shifters are honed from aluminum, drilled pedal covers are all there, and the lines looks handsome.  Unlike the old model, the interior actually looks like a nice place to pass the time.  The one thing I didn’t like was the seat color, which looked almost too garish for a performance SUV.  Luckily, black is available too, and defnitely looks better than the bright brown. 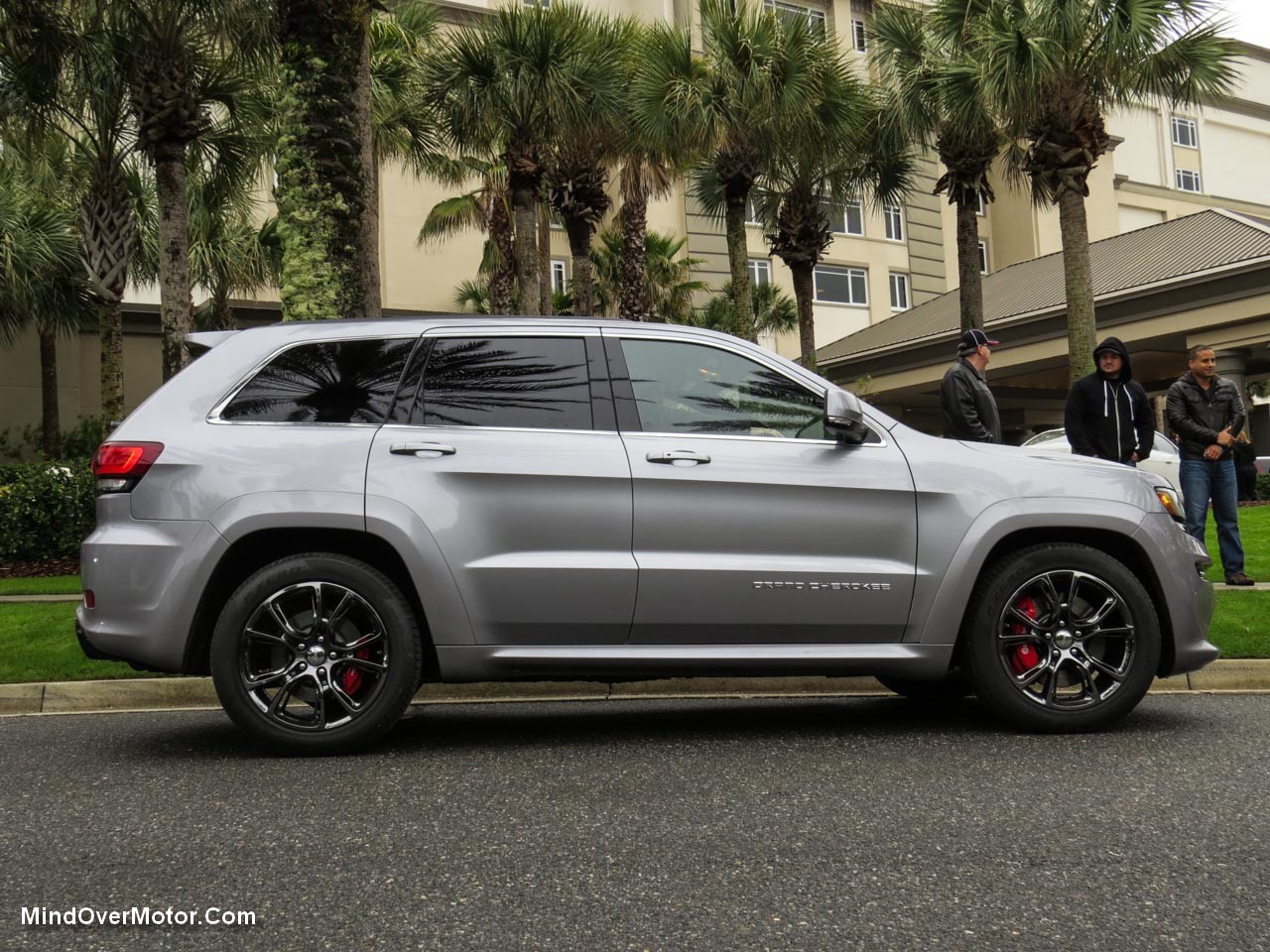 The build quality and fit and finish is great for this Jeep, but for 71 grand, it’s tough to judge.  At this price point, I’m expecting a lot but I also understand that the Grand Cherokee SRT is a big value for its performance.  As such, I was expecting average quality and finish.  I was wrong.  The bodywork polishes to a nice shine and the silver paintwork looks on par for a premium price, although not quite for 70-plus.  There are some gaps along the fender flares that detract from the big truck’s looks, but it’s not noticeable until one gets close.  The headlights seemed to already have a slight issue of holding water, but the taillights seemed to be fine. 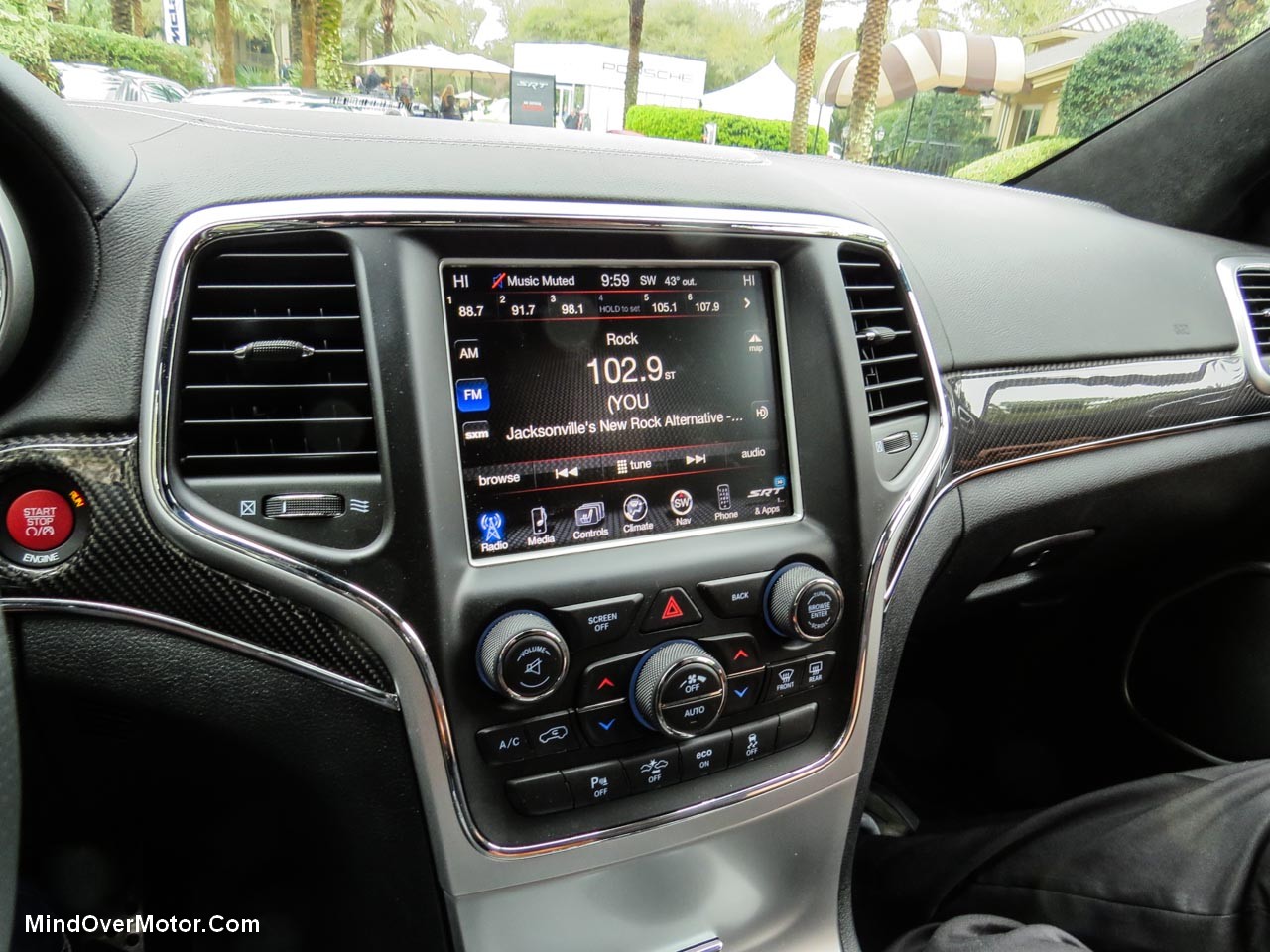 The interior quality is excellent.  The seats, despite the fact that I was not happy with the color, are comfortable and the leather feels better than the brand would suggest.  The dashboard is shod with real carbon fiber accents and the silver-painted finish on the center stack and console looks better than it costs.  The suspension control falls readily to hand and the shifter feels like a quality product.  The shut lines are good and nothing feels “thrown together.”  Dare I say it, this is the best interior I’ve seen Chrysler Corporation attempt–and considering how far they’ve come since 2010, these are strong words. 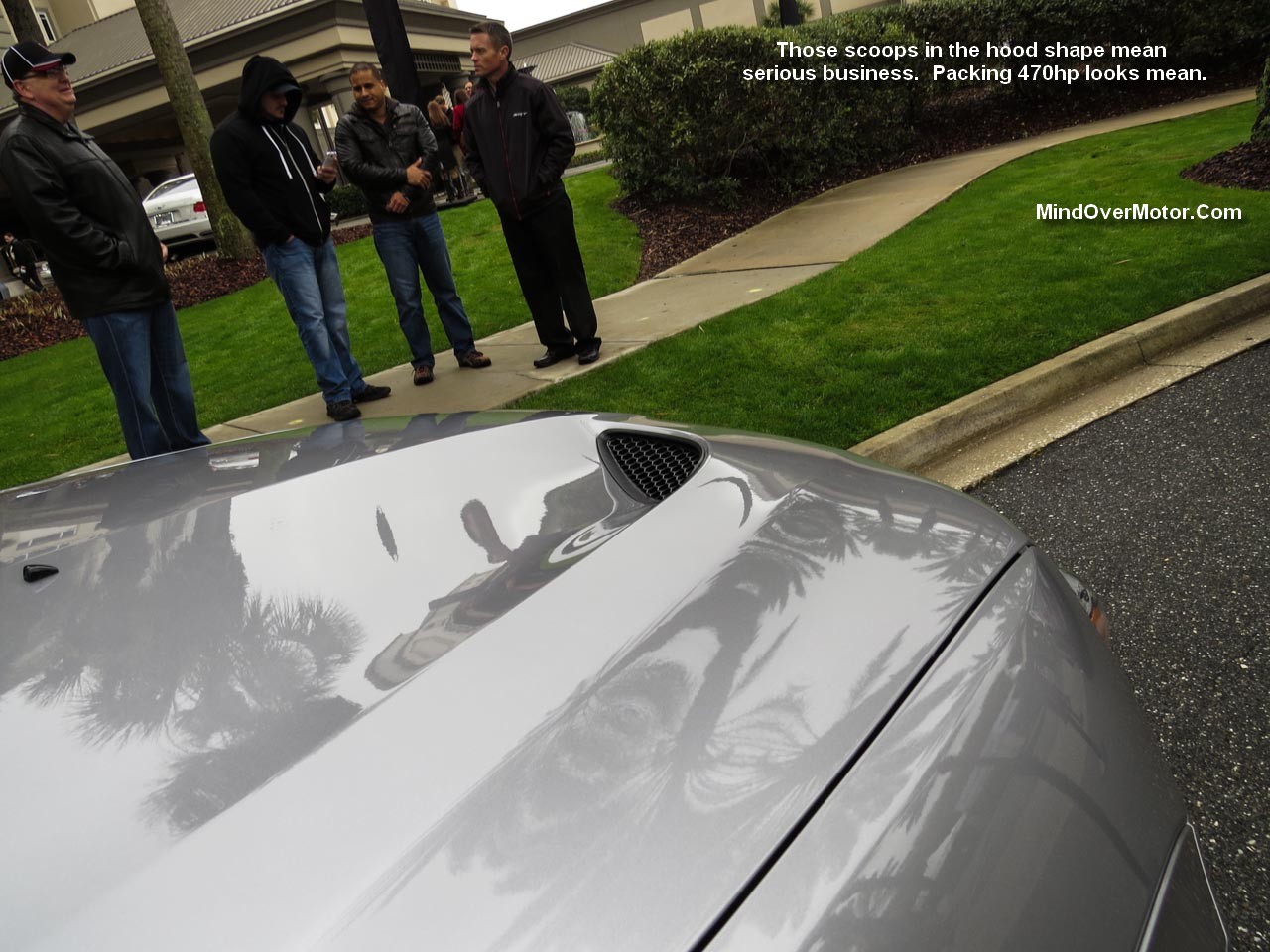 Putting wheels on the ground is where the Jeep Grand Cherokee SRT really hits pay dirt.  This truck packs a 470hp 6.4L Hemi V8 and weighs about 2 and a half tons, all-told.  It’s not as quick as the supercharged Range Rover I had out in Pebble Beach, but it feels plenty powerful.  Nudge the gas pedal, and this thing rockets to 60 miles per hour without even asking why.  Off the line, the engine note sounds insane.  In fact, with the windows all the way down, I nearly mistook the engine for something out of a powerboat.  It pulls cleanly from a stop and builds up smoothly, a fact emphasized by its 8-speed automatic transmission, which will be added to other SRT products in teh coming months.  This transmission alone fixes a lot of the woes I had with the drivetrain in the Chrysler 300 SRT–it shifts better, provides much better fuel economy, and doesn’t hunt between gears all the time.  As a side note, this big Jeep can tow up to 7200 pounds with the optional trailer package, which was spec’d on this model.  I could only imagine how much fun it would be to tow a Miata to the autocross track, then go waste a few people on the drag strip with the SRT–all in a day’s work for a truck like this one. 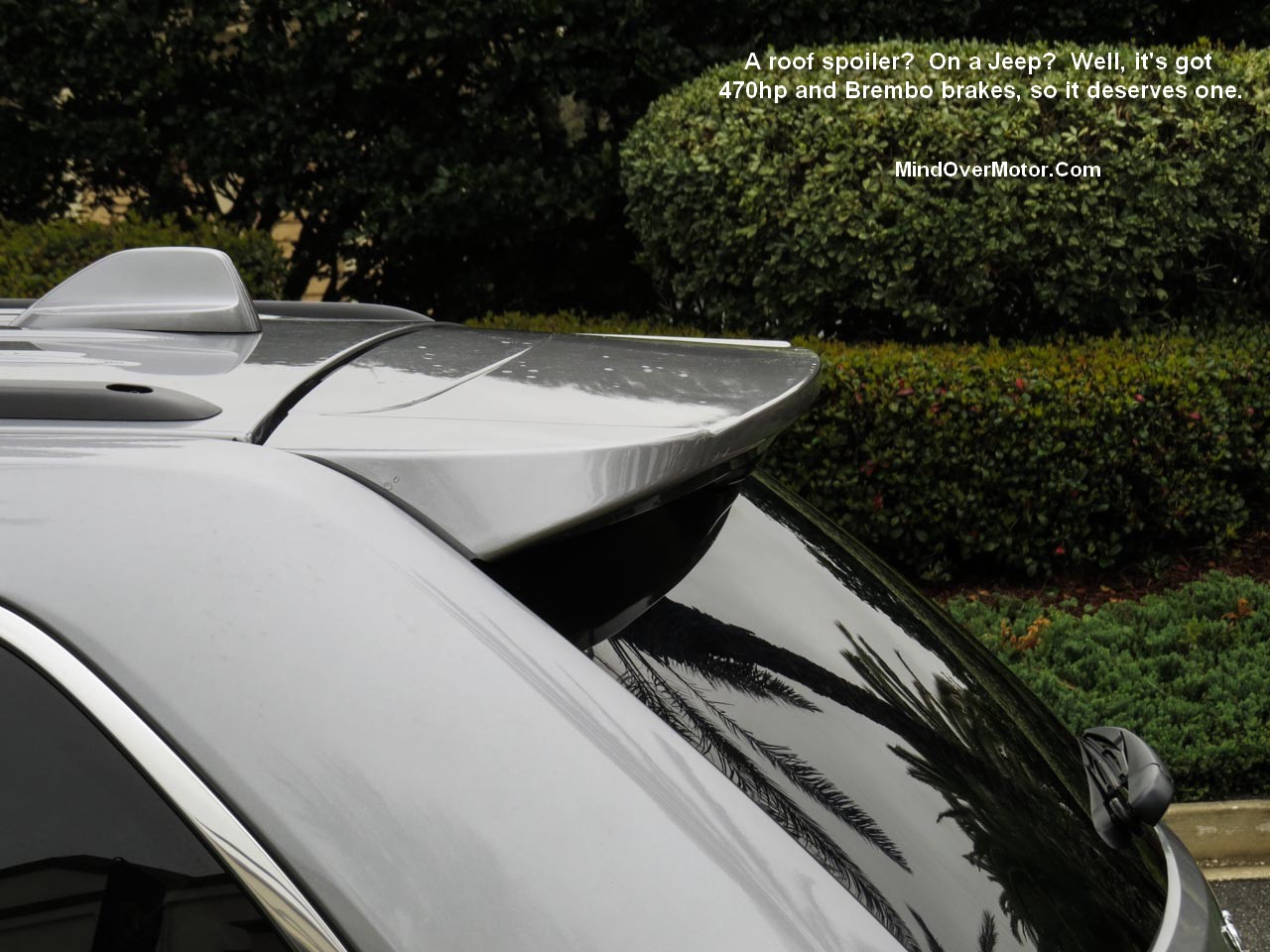 The steering and handling feel better than expected.  I was warned quickly of the speed traps around the area that morning, but I didn’t see anyone stalking the roads.  The SRT comes with a set of massive Brembos at all four corners and stops with serious authority.  The ride, despite the huge tires and tight suspension, is very comfortable and inspires a good amount of confidence.  The handling, despite the limited roads, was surprisingly good and the truck felt very stable.  Grip from the stock Pirellis is commendable.  The steering is a bit too light, though–like the Chrysler I tested last summer, it needs a lot more feel and doesn’t communicate the road very well to the driver. 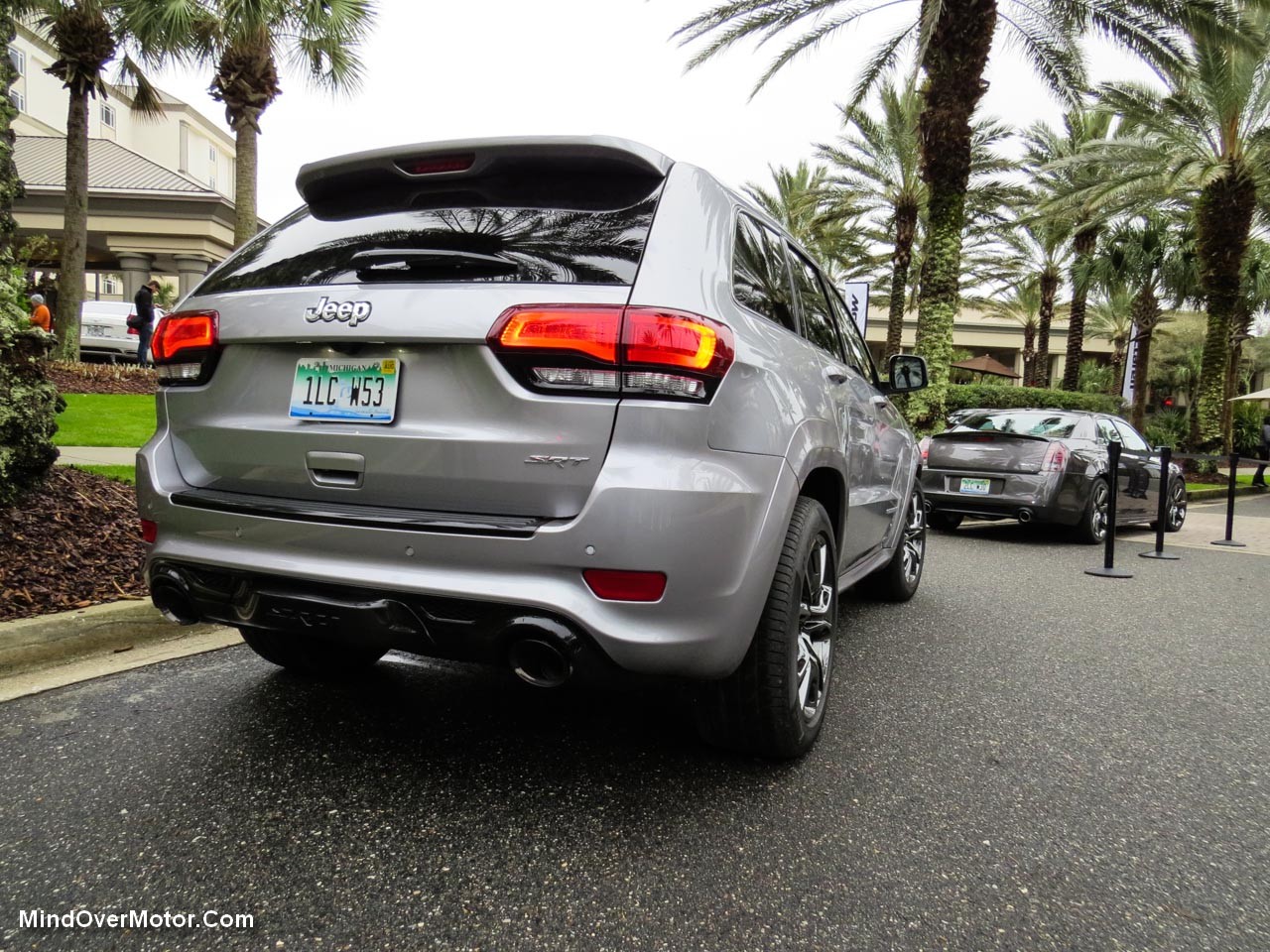 The Grand Cherokee SRT’s best attribute is a pretty honest one, and that’s the value for money.  Loaded up, this SUV is about 70 thousand dollars, at least 30 grand less than a good amount of other fast SUVs.  Although it doesn’t have 500hp, it’s got enough to keep most people entertained costantly.  The level of equipment is excellent, the ergonomics are easy to figure out, and the instrument panel is a snap to figure out.  I was particularly impressed with the entire package.  Although I have my gripes about some long-term reliability for recent model Chryslers, I got past that behind the wheel of this thing.  It’s easy to drive at low speeds, while goosing the loud pedal produces a chilling thrill.  There’s plenty of room at all corners and the lack of a third row makes loading and unloading equipment rather easy. 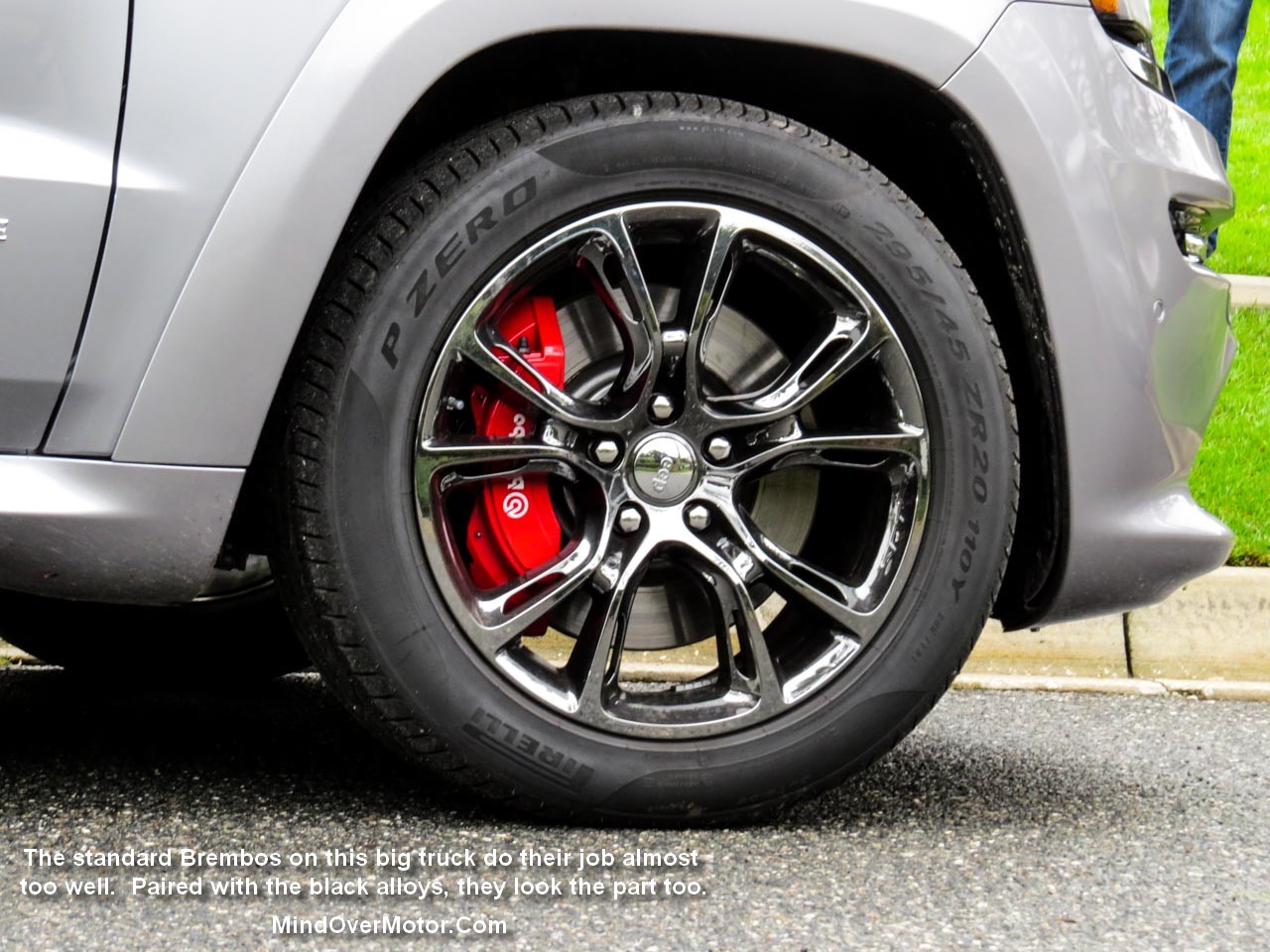 Overall, there’s little to dislike about the big Jeep.  It’s not trail-rated, but it’s certainly track-rated.  The comfortable interior makes high-speed barnstorming feel easier than shooting fish in a barrel, while the chassis keeps the heavy truck anchored squarely to the road.  The fuel consumption will raise plenty of eyebrows and I’m sure insurance will hurt a bit, but at the same time, this is a power SUV that’s more than half a C-note less than a supercharged Range Rover, BMW X5M, or Porsche Cayenne Turbo.  It’s down on power to all three, but for 70 grand or so, it’s tough to say no to a truck like this one.  It’s the best SRT I’ve had the pleasure of driving.