Let’s start off using the example scenario from the series introduction.

So you’ve just taken a new job in Miami that pays a whole lot more than your old job. Congratulations, you have finally made it! You’ve got yourself a really nice apartment with a view of the city, and it came with 3 parking spots in the building’s parking garage. You figure you can afford to spend $150,000 to get your car game up to par for your new job in this iconic town, where standing out can be quite a challenge.

You see many nice cars around Miami, but its mostly just beach cruising since the land is quite flat and the urban sprawl extends quite far out. There are a few racing circuits around for track days, but public roads are mostly straight and cornering fun will be mostly limited to highway on/off ramps.

As for places to go, you have the Florida Keys to the south, and the west coast of Florida to the north with destinations like Fort Lauderdale and Daytona Beach. Miami is way down at the tip of the Florida Peninsula, so any drive out of state destination will be a long one.

Weather in Miami is nice for much of the year, but also can get quite hot, being in the tropics. A convertible is always a good idea, but remember that there may be some days when you’ll want frigid A/C to escape the heat.

So with all this in mind, what vehicles would you have in your garage?

Let us know in the comments, and see our choices below.

Parking Spaces: up to 3

Drop-top Ferraris and Miami Beach go together like peanut butter and jelly. I’m a sucker for for blue/tan Ferraris, and this 360 came with a clutch pedal. Even without a ton of winding roads to exploit in the area, driving a manual Ferrari Spider is always an exhilarating experience, and it would definitely see some track time. With that, I chose this car as the basis for the rest of my garage.

A BMW M6 Convertible is a fantastic car to have in Miami. It has the horsepower to be thrilling on the highway with an epic V10 soundtrack, especially if you run straight pipes. Its also great for cruising the beach or going out with friends because it has four seats. Also, being a solid grand touring car, it’s great for long highway cruises to northern Florida or beyond. I went with paddle shift on this one because it’d be doing double duty as a city/beach cruiser.

So with the other two, I was left with $43,000 to get a solid daily driver. I had originally thought of a diesel VW/Audi but diesels aren’t best for short city drives. I remembered that the front-wheel-drive Mercedes CLA 250 got 38mpg on the highway, so I went with that. I was able to put most of the options on it, and I wound up with a really nice daily runabout that will carry the practical load that the other two don’t. 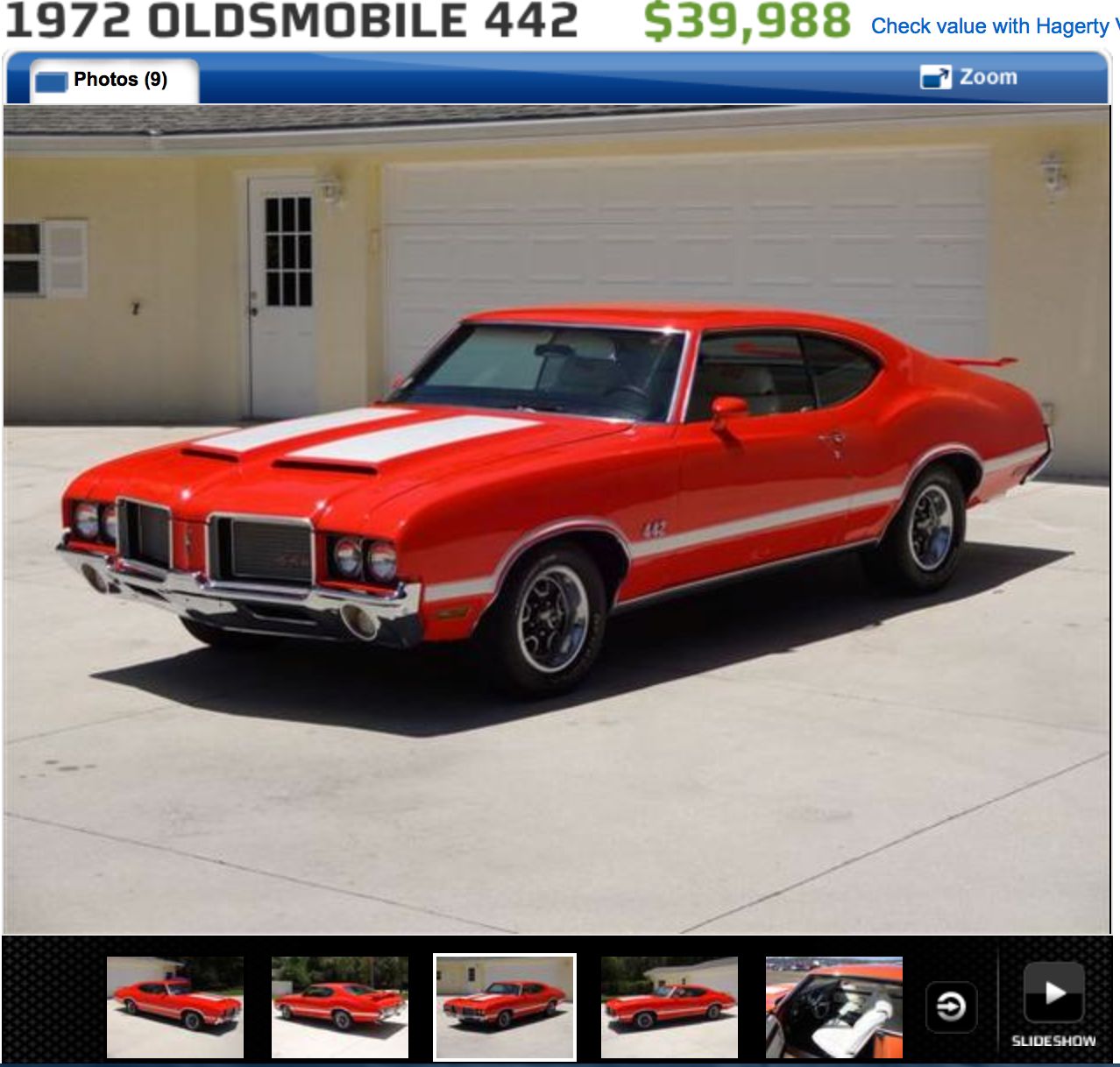 I got lucky here.  Searching for a classic can be a bit difficult and for whatever reason I can’t find the perfect Oldsmobile 4-4-2 droptop in the area.  That is, until this hardtop showed up on my radar!  This is a great car for posing, showing off, and setting off car alarms, all while relaxing in a nicely trimmed early Seventies interior, sharing space with a Hurst four-speed shifter and a set of dual exhausts bellowing out a 455-cubic inch soundtrack a few feet behind the ears.  It’s not for turning, it’s not for stopping, but it’s definitely a great companion for the straight highways and the sun-kissed boulevards of Miami.  I’d want this car for cruising around on nice days, even with the slightly troublesome four-speed manual, it’s an American classic and would stand out quite a bit next to some of the other cars one would expect to see. 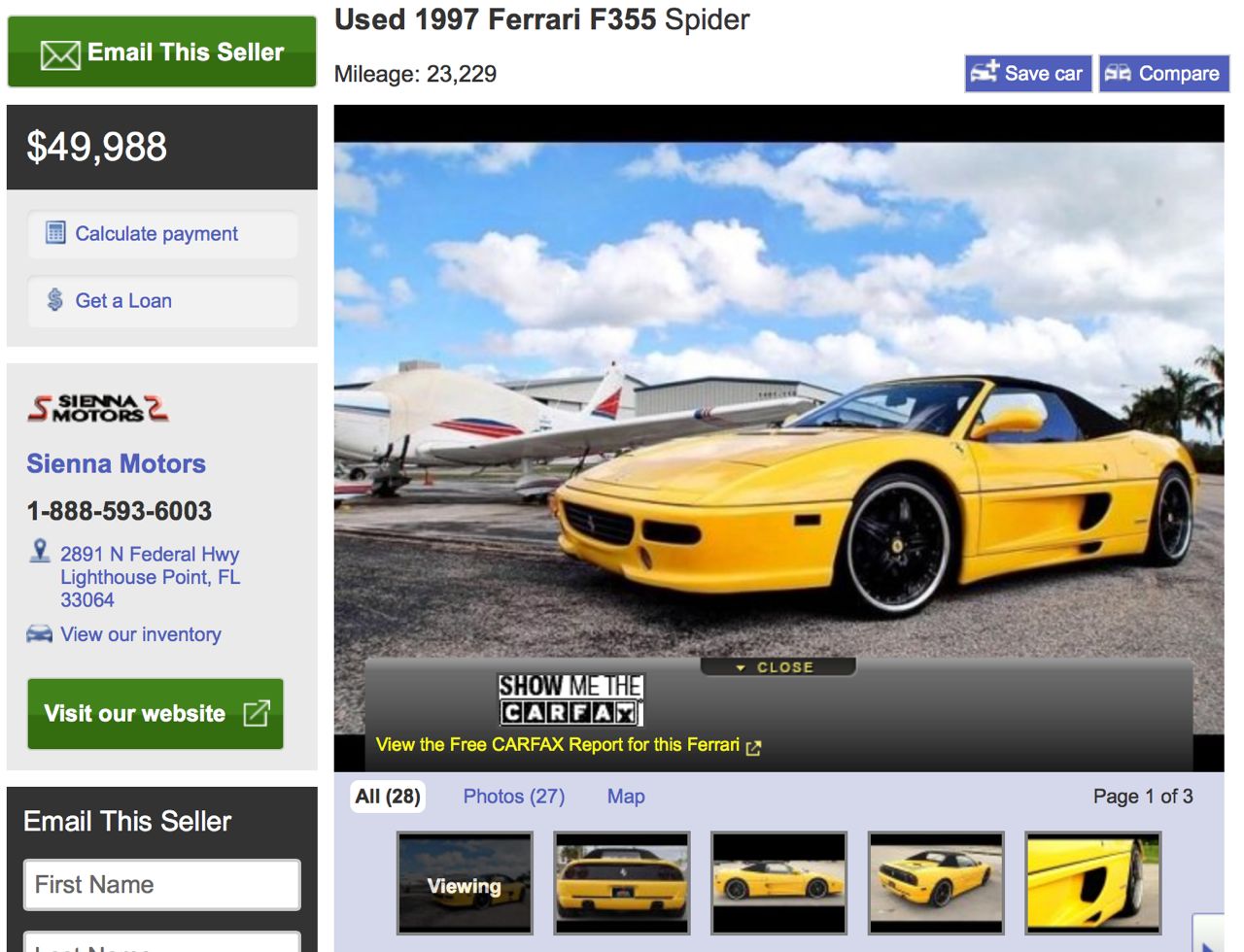 It’s not difficult–Ferraris are cars that can do a few different things really well, and other things not very well.  This is not a car for me to drive all the time.  Like the Olds I picked above, it’s not new in any way, shape, or form.  But, I go nuts for yellow Ferraris–they’re loud, they’re all up in your face, and they get the attention few other cars on the street can dream of getting on a regular basis.  The F355 is the last of the mid-engine Ferraris with flip-up lights, and this example’s in excellent shape, with a set of black-and-yellow rolling stock to boot.  I’d be happy to take this one on the track with an alternate set of tires and wheels, but it’s a good cruiser as well, and that screaming V8 is a tough option to give up on.  Of course I want it.

You might be wondering how I can get this car into the list despite its price.  Cadillac is running a little deal on this car–3 grand off.  For that sort of discount, I can buy this as a truly well-rounded daily driver and use it for road trips all over the state, or to impress my grandparents, who happen to be just 35 miles away from Miami.  It’s a CTS V-Sport, which I’ve had the pleasure of driving in Greenwich this summer, and I happen to love the finish in these cars–Cadillac has come a long way from plastic wood and Northstar V8s that blow head gaskets more often than Rosie O’Donnell forgets her diet pills.  These come fully loaded even without the premium model–not a bad deal. I miss the extra-cost performance brake linings at this price, but I can live with it–this is a great daily driver, and despite the poor fuel economy (19 overall, takes premium in a 19 gallon tank) I think the comfort, performance, and catchy looks make up for it. Plus, it’s a big black Cadillac–which means no one wants to get in front of you at the steakhouse.