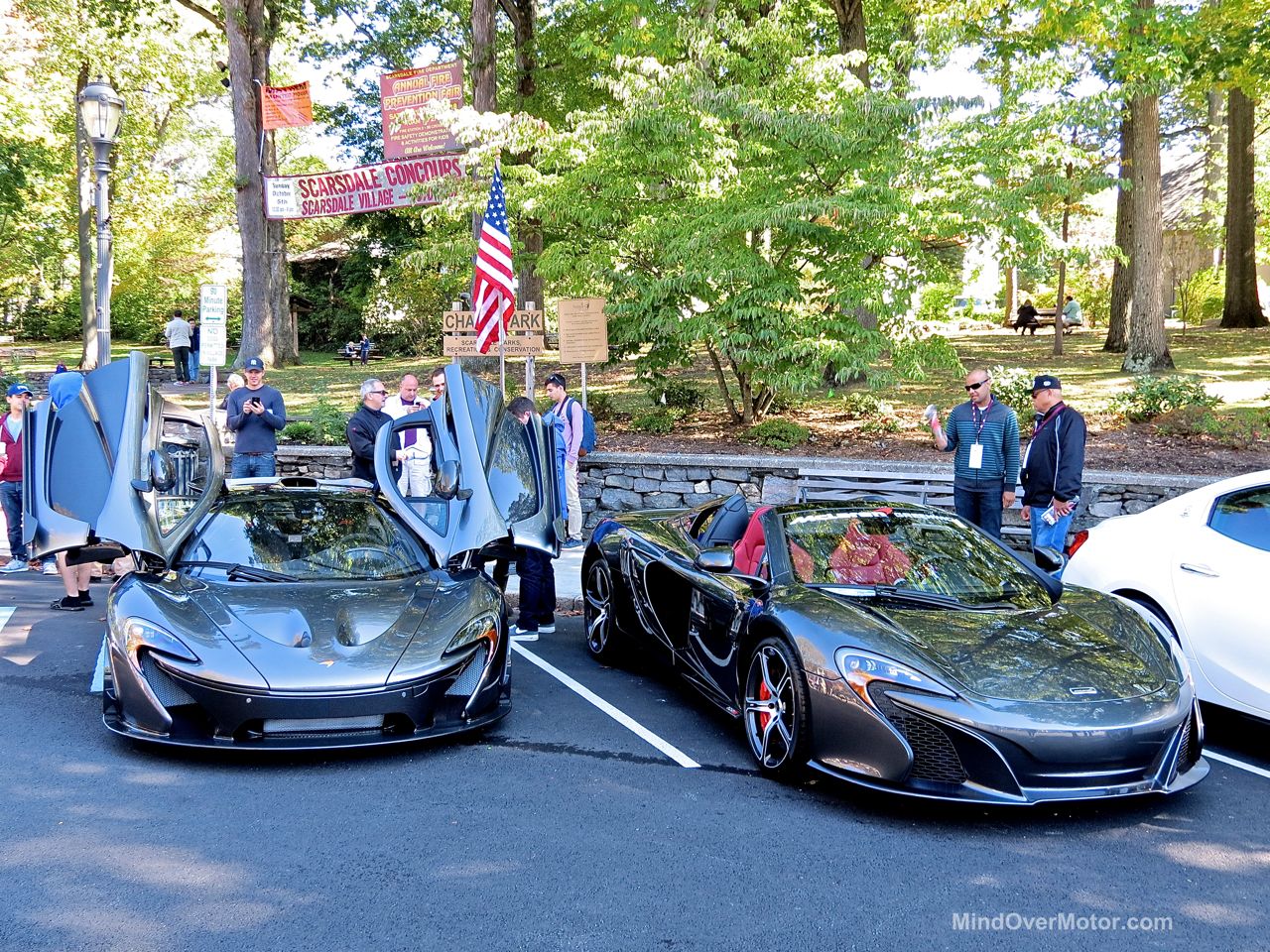 At the Scarsdale Concours, they had a McLaren P1 (left) on display right next to its little brother, a McLaren 650S Spyder (right). They were even the same color and have similar styling in the front. To most normal people, they looked like the same car, and I heard multiple conversations where someone had to explain why the grey car on the left was so much more special than the gray car on the right. This got me thinking about the real value of the McLaren P1, when it costs a massive $1.3 million more than the 650S Spyder right next to it. Is it really worth that, I mean really?

Now, obviously I realize that people who can afford a seven figure car aren’t counting their pennies, and most could easily afford both cars without a second thought. That isn’t my point here. You see, most of what people pay for with ultra-luxury items is total bullshit. Profit margins are through the roof, because it’s easy to get people to pay more if you just blow a little smoke up their asses with terms like “exclusive” or “limited”. So what do you actually get in a P1 for spending the extra $1.3 million?

Looks:
The P1 and 650S pretty much look the same to everyone but a car nerd. Driving through town, they will attract similar amounts of attention, but one or two more people will soil themselves over the P1. Car nerds tend to be extremely annoying when it comes to a car like a P1, so you could argue it attracts too much attention.

The only advantage to having a P1 is that your pants will bulge a little bigger at your local cars and coffee meet. But I’d hardly feel insecure about my car if I were rolling in a 650S.

Performance:
Obviously the P1 is faster than the 650S, but is it $1.3 million worth of faster?

Now, with more advances aerodynamics, the P1 is going to be significantly faster than the 650S around a track. If that’s your thing, then the money may be worthwhile. But if the track is your thing, then for $1.6 million, why not buy yourself an actual racing car?

Enjoyment on the road
For me, on the street, both of these cars are beyond insane when it comes to performance. The difference is that the 650S comes as a convertible and the P1 does not. That means the 650S can be enjoyable when you inevitably get stuck behind a minivan. In the real world, on my day off, the ability to drop the roof means so much more to me than all of the P1’s fancy hybrid and aerodynamic tech.

Might I actually prefer a 650S Spyder to the mighty P1?
Yes, actually, but on a subjective and personal level. If I just look at them, car-for-car, forgetting about the P1’s rarity, the 650S is just a better package for how I’d want to actually use a car like this in my life.

The car would see occasional track days, but it would mostly would be enjoyed on the street — cruising with the roof down, going fast under the nose of the police, and being my chariot to various fun destinations. I just think the 650S can do all that better than the P1, and I’d rather spend the remaining $1.3 million on a collection of other cars to enjoy.

Also, if you just want speed, you could have a 250mph twin turbo Gallardo for a hell of a lot less money than a McLaren P1.

I’m not saying the McLaren P1 isn’t an epic machine. But I am saying it probably isn’t worth it, unless you can buy it for cash without a care in the world. If you’re financing a P1, or stretching your budget, I think you’re making a big mistake when the 650S exists.

But then again, maybe I’m making too much sense out of a completely non-sensical purchase.

One thought on “Is The McLaren P1 Really Worth Another $1.3 Million Over A McLaren 650S?”