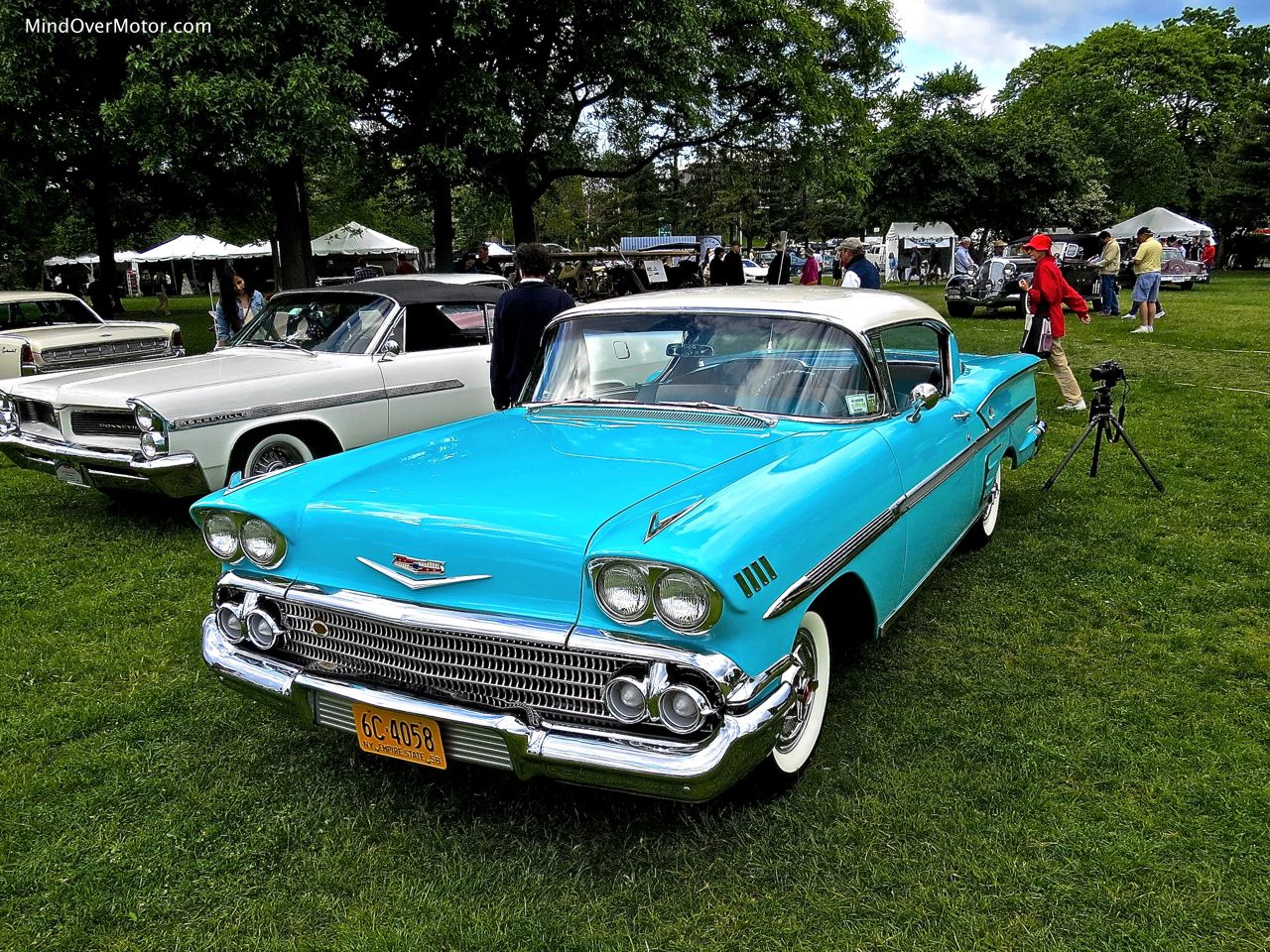 The Tri-Five Chevrolets of the 1950s are legendary, but I feel like the model produced just one year later is better than its three older brothers.  1958 marked the appearance of the top of the line Impala for the first time, and the name would stand as Chevrolet’s standard-bearer in the full-size market until 1985.  The name is still of course used today (despite being dragged through the mud since my pre-teen years) as Chevy’s full size car.  In ’58, the lineup got a redesign which brought quad round headlights across the board and marked the appearance of the three taillights per side that would stick to Chevy’s top of the tree models until 1966.  Six-cylinder and small-block V8 engines were available as they were for 1957, but the ’58 brought with it the debut of the big-block V8 option.  Although it only displaced 348 cubic inches at the time, this top V8 option was available with a set of three two-barrel carburetors and mechanical lifters, which increased output to 315 horsepower–32 more than the fuel-injected 283 that topped the lineup a year earlier.

This one on display at the Greenwich Concours at the end of May was a very straight example, sporting a rear antenna with the correct rearward slant, flashy chrome, and a clean set of knock-off style hubcaps.  The Tropic Turquoise paint finish shined brightly against the cloudy but still bright daylight sky, and the white roof set everything off nicely.  The ’58 chassis was a one-hit wonder and for 1959, the lineup got revised again, making this car a bit more unique than it would be.  It stands to reason that the 1958 Impala and its lesser models of the year are becoming more and more collectible as time goes on–prices are beginning to rival what the 1957 models have been going at lately.  I’m a sucker for the ’58 Impala, as it was a classier and more filled-out car than the 55-57 series, but not as over-the-top as the 1959 and 1960 cars.  The earliest Impala strikes a great balance between the outlandish style of the late Fifties and the reserved taste of the early part of the decade.  Enjoy the photos. 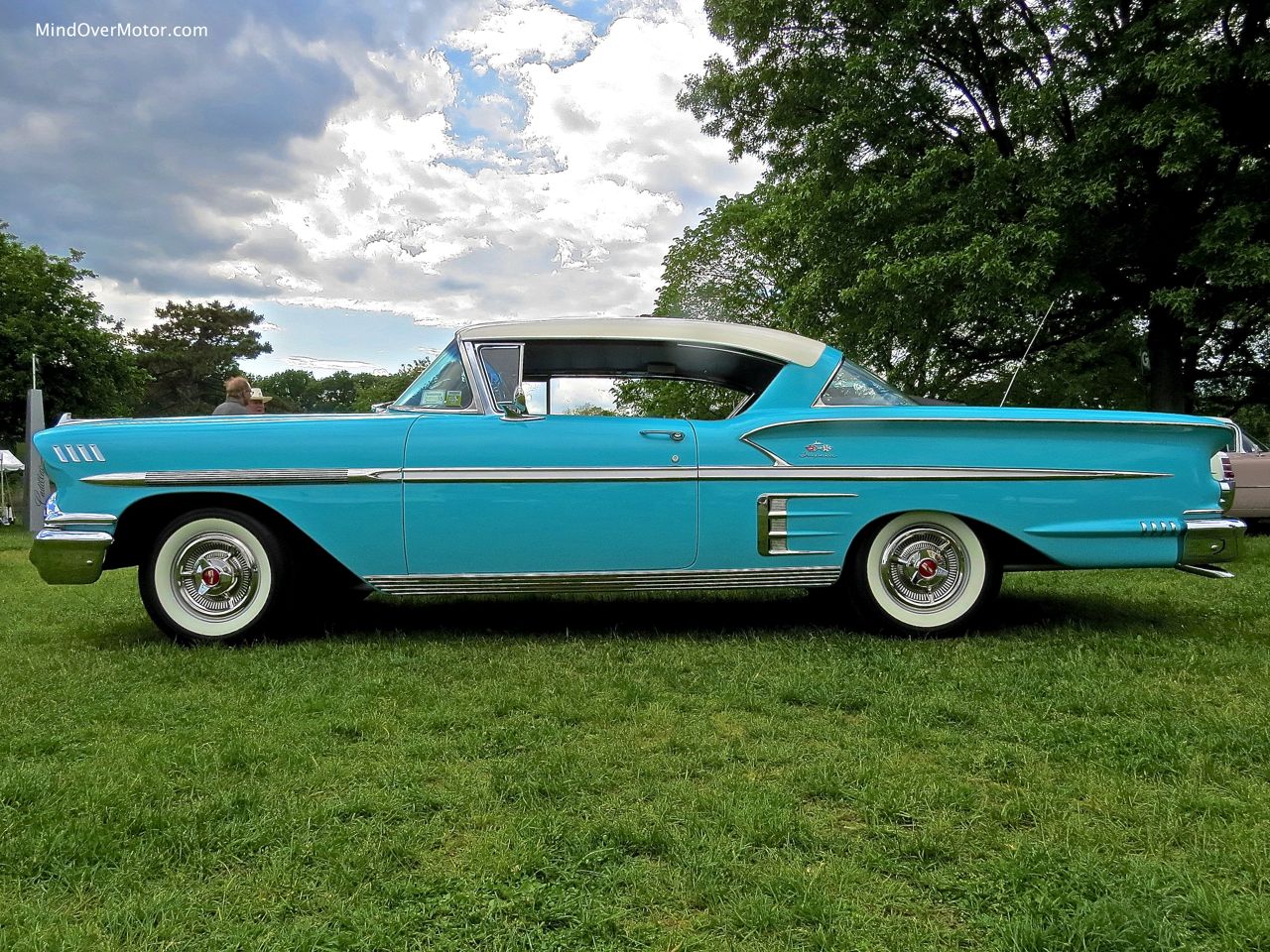 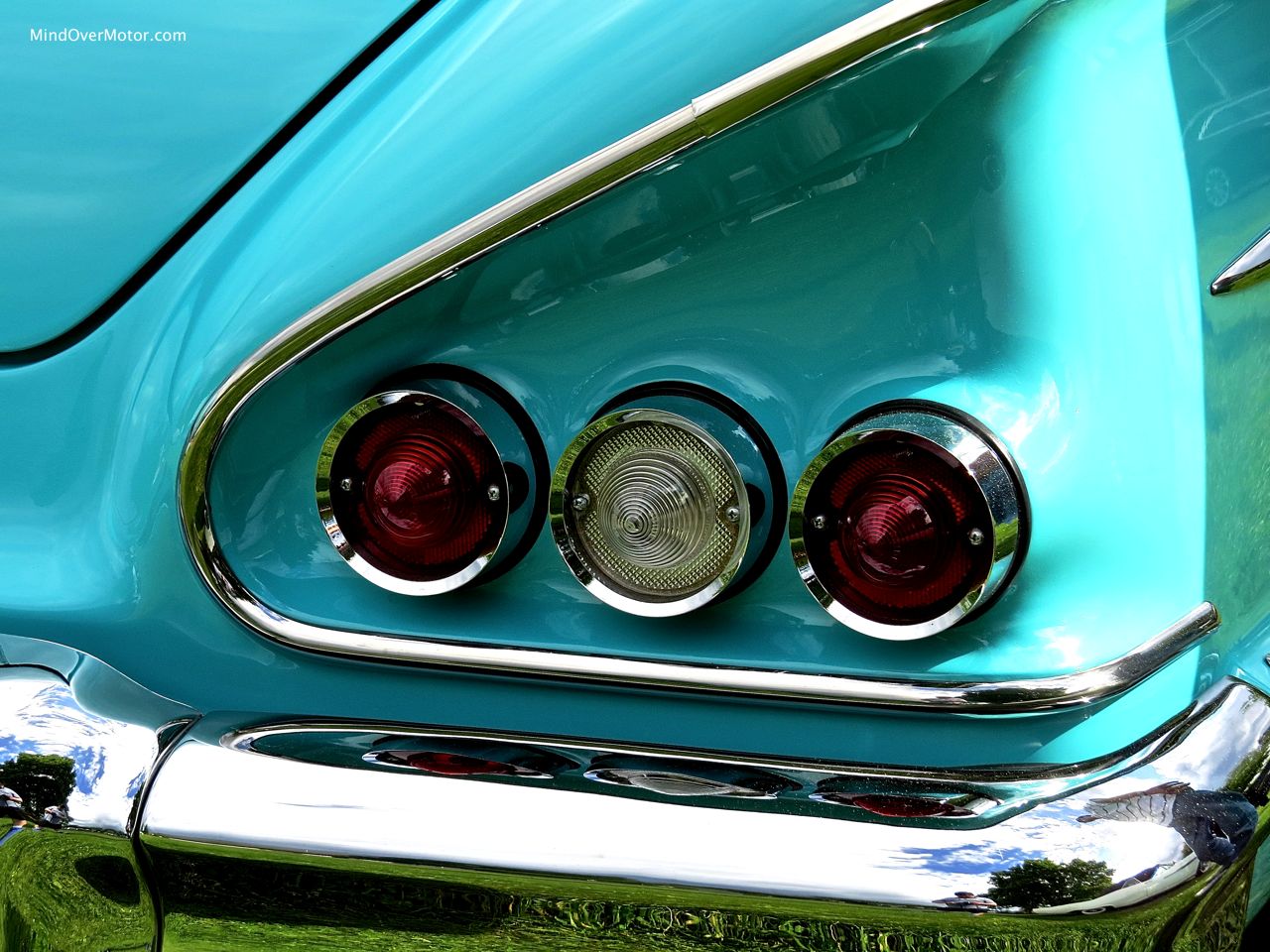 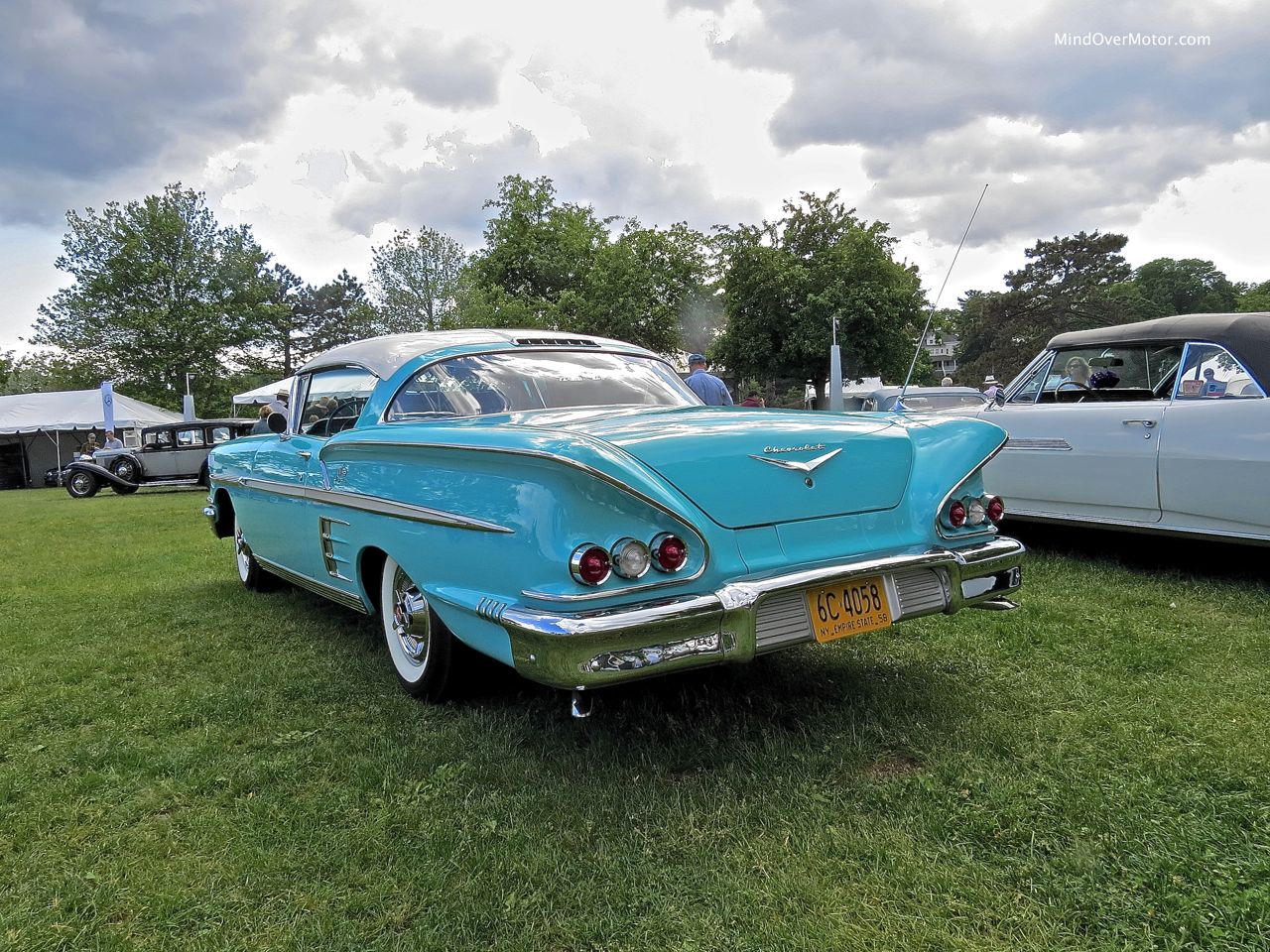 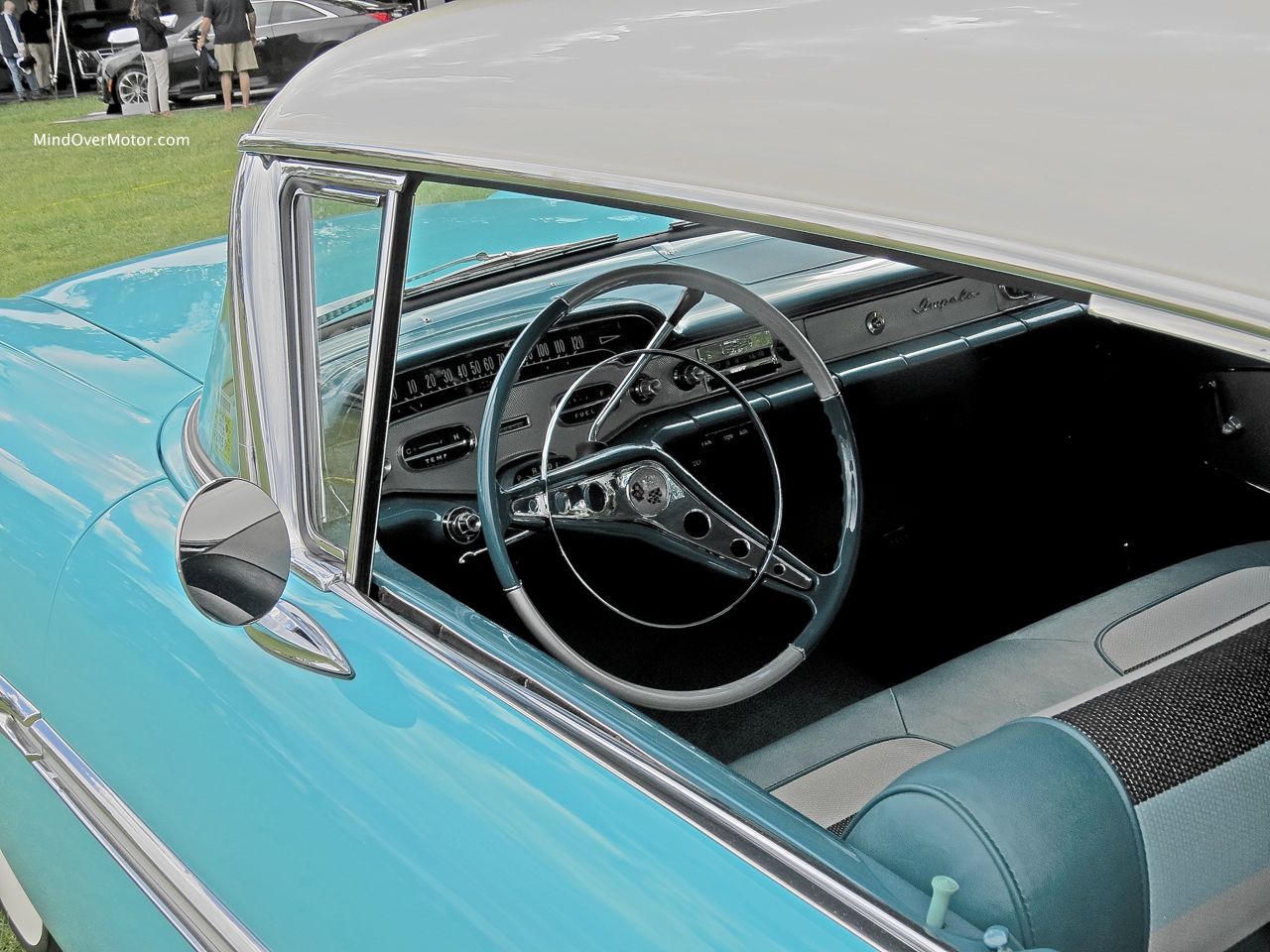 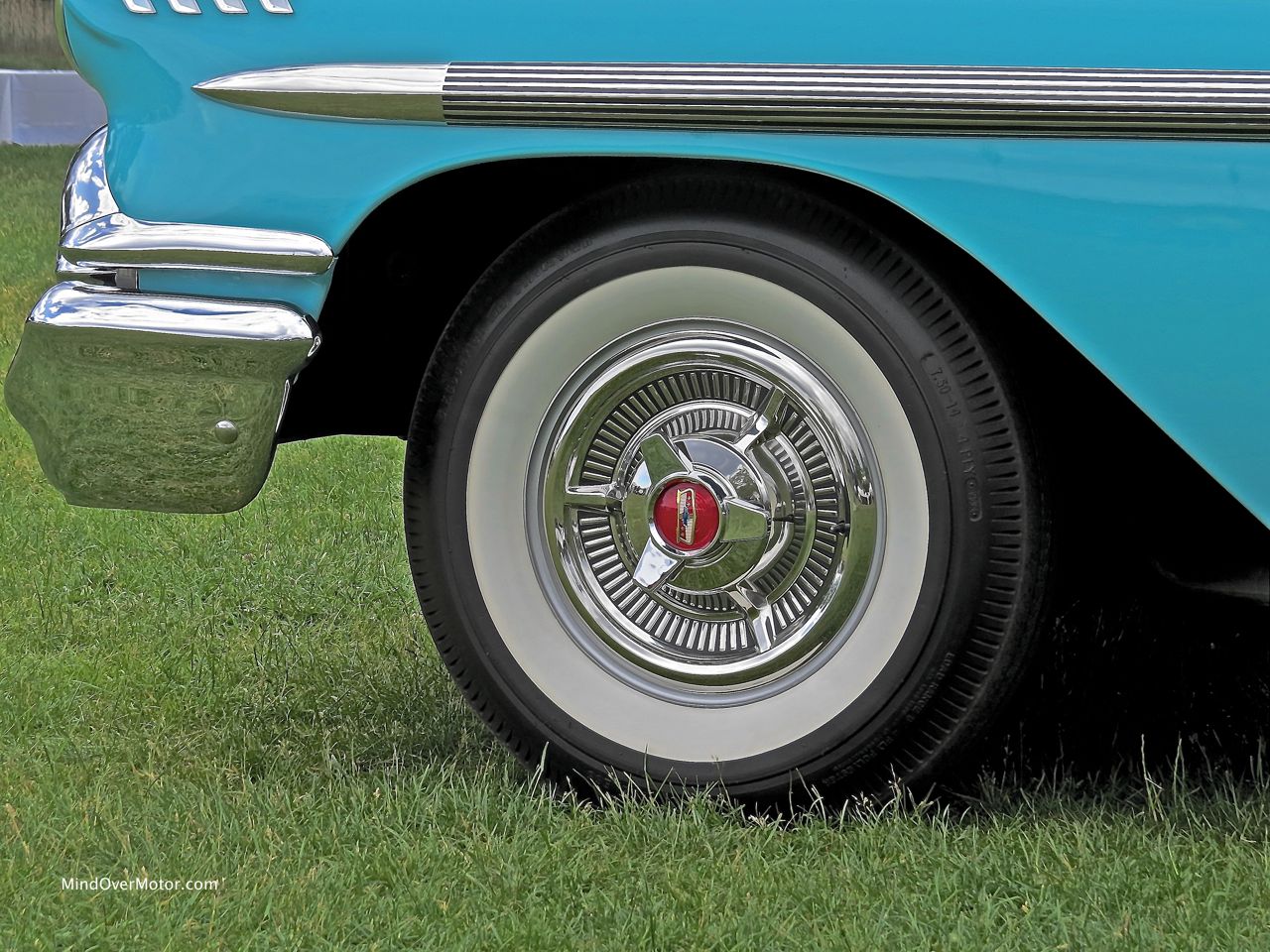