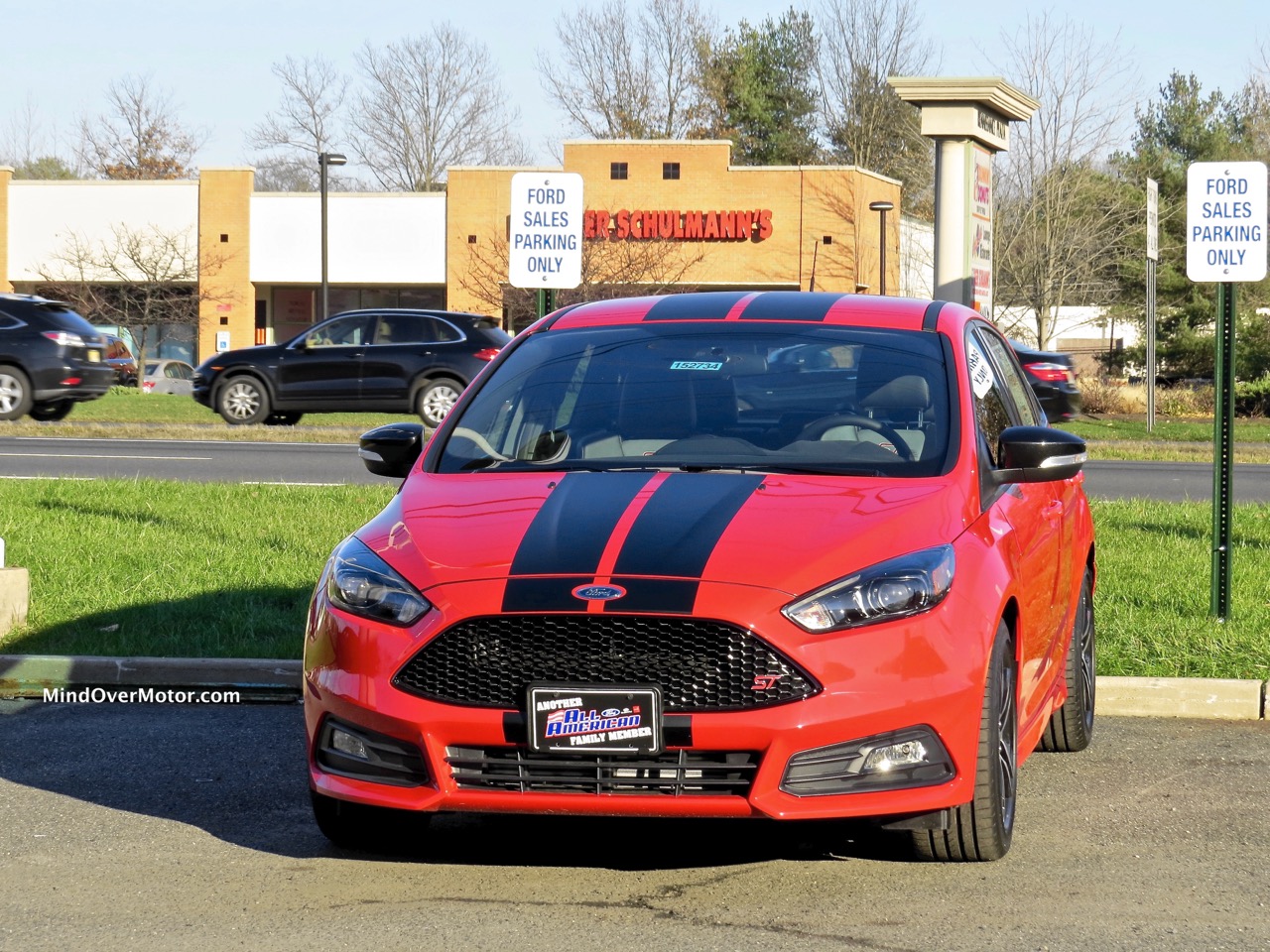 The Ford Focus has been on my radar for longer than we’ve been running this website.  Back in 2011, the first car I drove to review for the website was a 2011 Focus SE sedan and I thought it was a massive step in the right direction for Ford’s compact entry.  A few short years later, the ST launched–and we all rejoiced that Ford had thrown its hat into the hot-hatch ring, creating yet another choice for less than 30 grand. It’s taken some time for me to get around to it, but a few weeks ago, I took this 2015 model for a spin around Old Bridge–and learned a lot about what Ford’s doing to stay relevant in this super-competitive market. 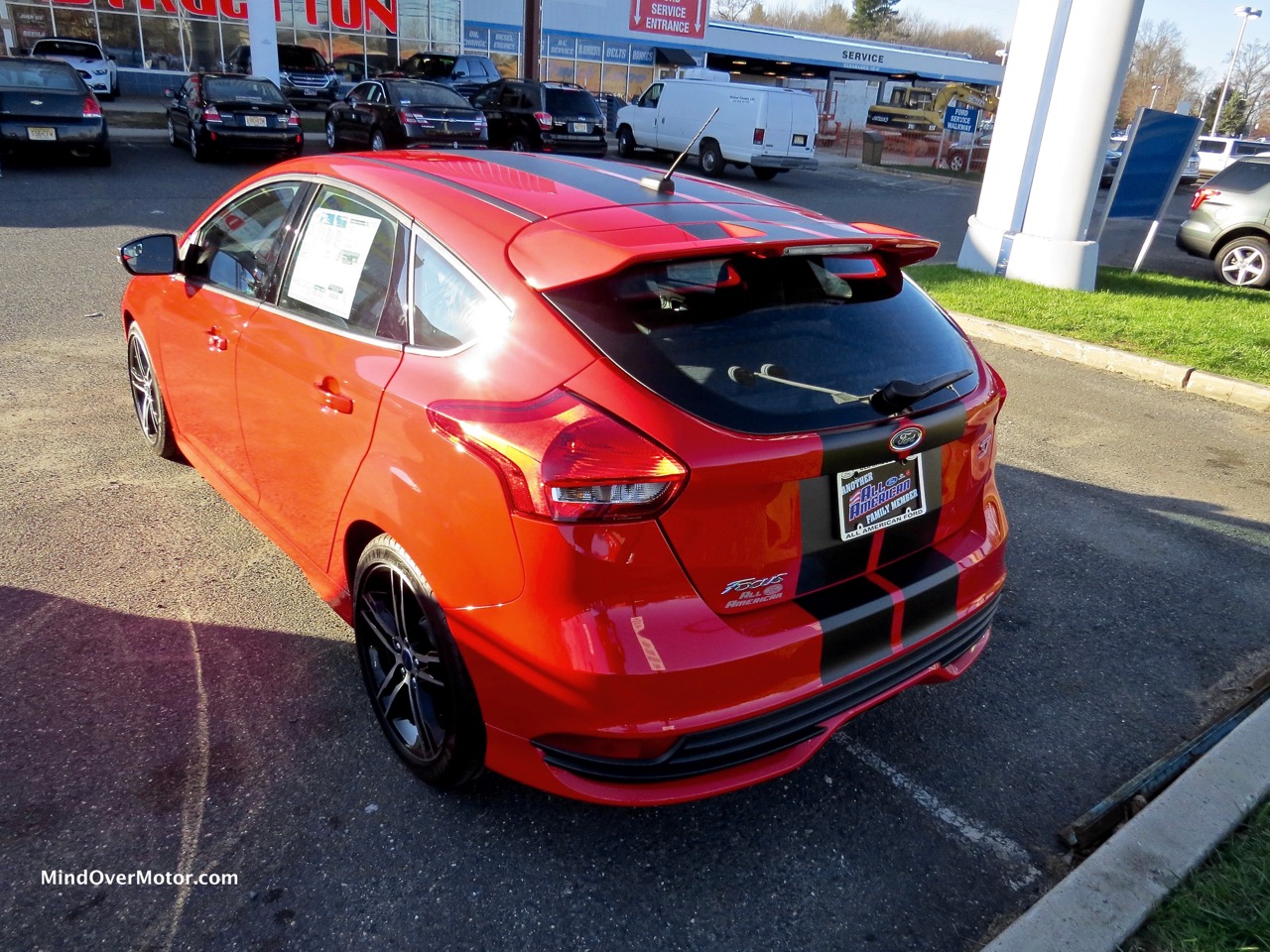 Ford made a strong effort when the first new-shape Focus hit the market about 4 and a half years ago. The clean, unrestrained styling looked good and the car looked relevant for the first time in years. The ST came around a few years later, and America went ballistic. Ford beefed up the styling by adding a big maw of a grille, ground effects everywhere, and loud 19-inch wheels, all as standard. When I describe that, one might think that it’s like a nasty old Civic that’s been riced out. Yet, the look works nicely. It’s aggressively tasteful. If it were an animal, I think that it’s a bit like a Pug that’s hit the doggie gym. Ford facelifted it last year, and there’s been a good improvement, especially in person. If the old look is too soft, the new lines inject a more masculine stance and face. Slap on a little red paint and black “LOOK AT ME!” stripes, and Ford’s just scored a touchdown and an extra point. They’d have a two-point conversion if this car had the standard wheels, which look a bit more professional and fill the wheelwells a bit better than the required 2-tone rims when the stripes are ordered. 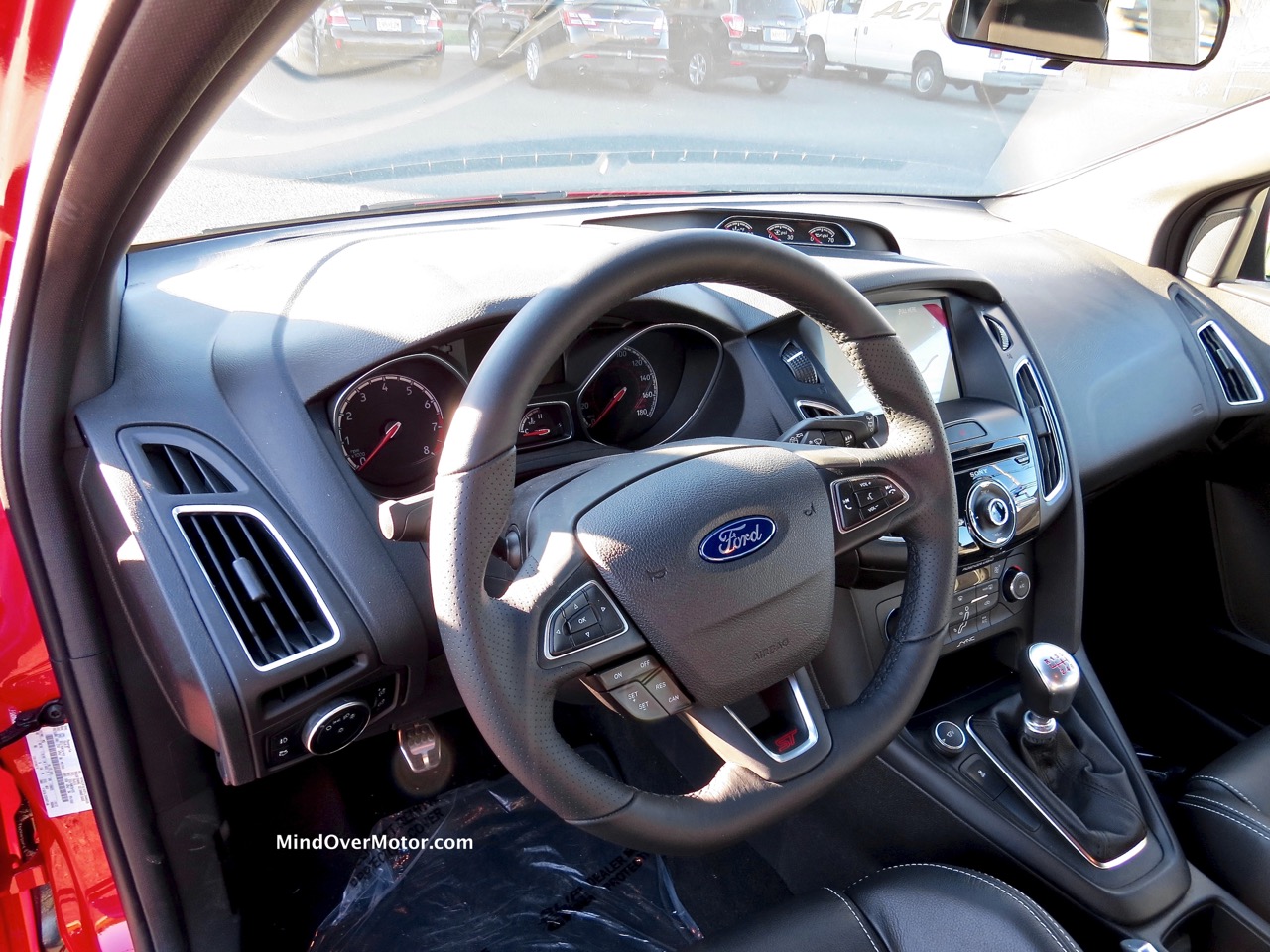 The interior, just like the regular Focus, is a big favorite of mine. THere’s plenty of ambient light that’s capable of hitting all the nooks and crannies, so everything’s easy to find even underneath the dashboard. The console looks good, and the center stack, now that Ford’s been making the Focus this way since I was able to buy a drink with a real ID, is easy on the eyes–even with MyFordTouch taking up the top half of the UI. It’s not a design award winner and it won’t take home a medal, but it works. The leather seats don’t hurt either. 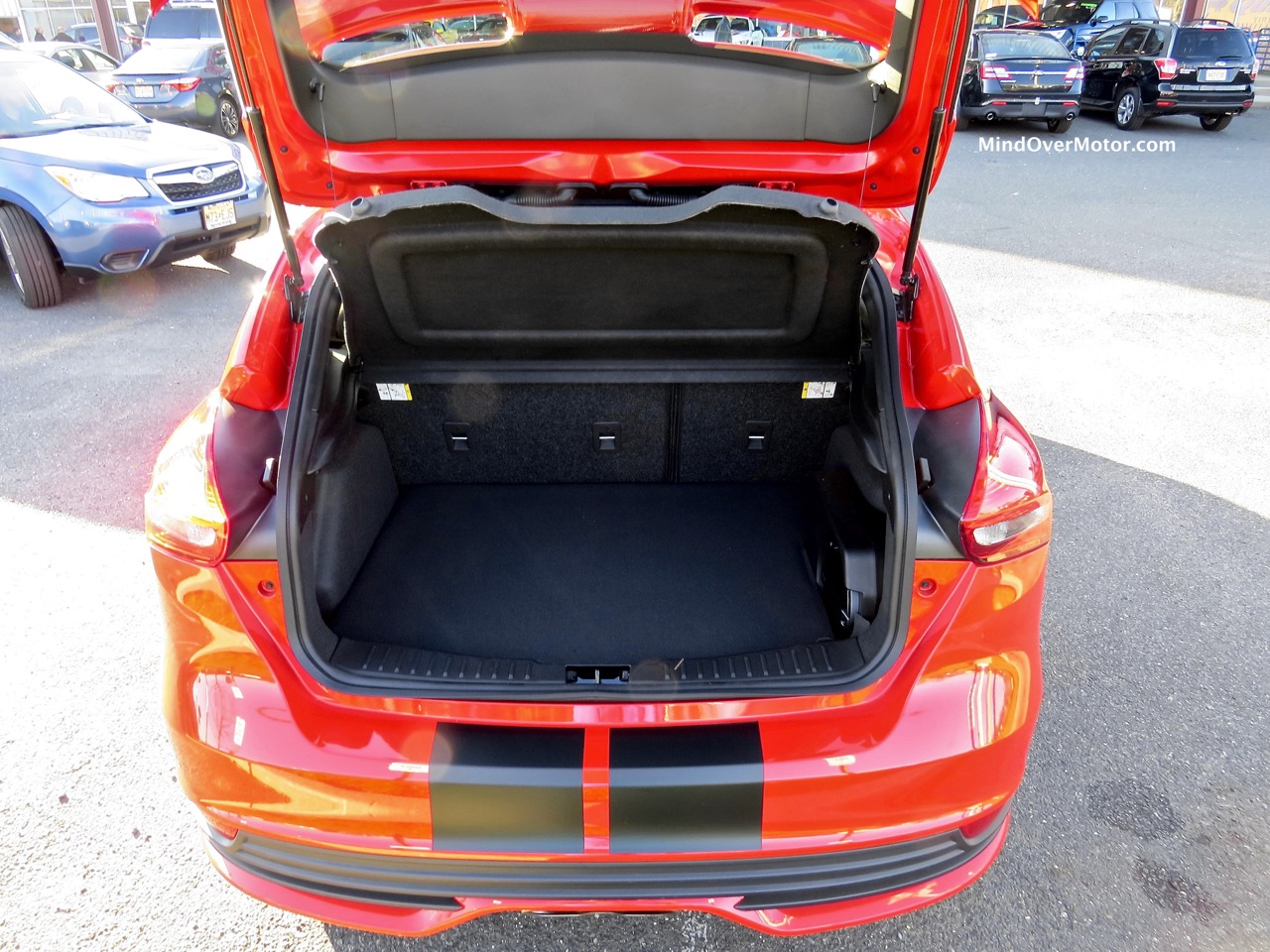 Ford’s last foray into fast sport compacts was the SVT Focus, which was an interesting little hot hatch but unfortunately didn’t get enough attention. But since it was a first-gen Focus, it squeaked, rattled, and used the best materials Ford could get their hands on (which were about the same quality as a Cleveland Browns quarterback). Ford’s gotten a lot better at this over the last decade and change, and the ST is screwed together nicely. The paint quality looked great in the sun and the stripes provided good contrast. They’ve set up the ST with summer tires as standard equipment with these wheels (which is a bit unusual considering the state of sale, but all-seasons are cheap and not hard to get). I would imagine the wheels being extremely difficult to keep clean, however. 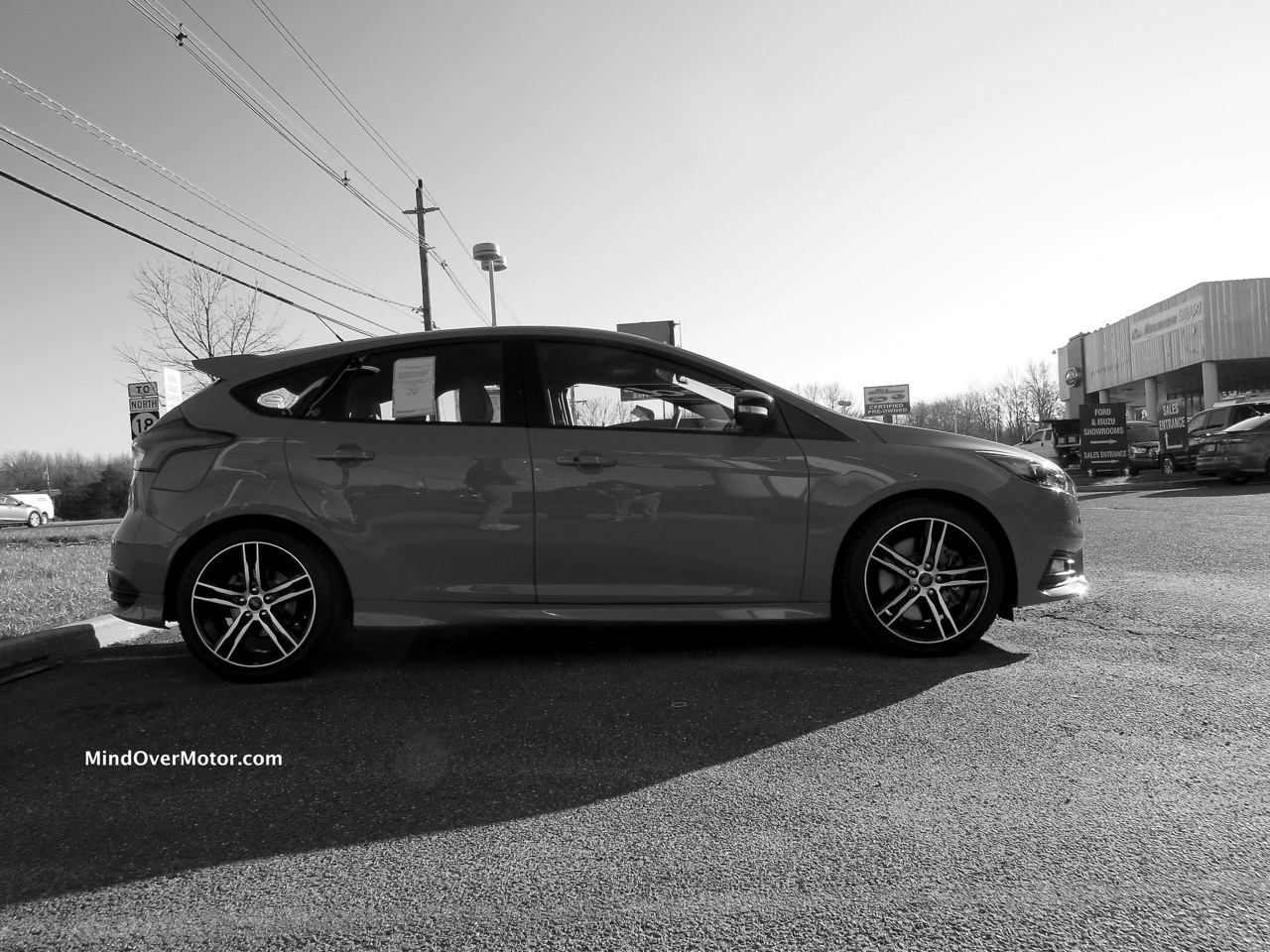 The interior quality is a huge step ahead of where Ford has been when I was mooching rides from high school seniors after missing the bus. The Focus is a world car for Ford (part of the “One Ford” initiative, one of Ford’s stronger ideas over the past few years) and the materials show. The Recaro seats in my car were finished in nice leather for a sub-30K car, It’s got spare gauges for oil temperature, boost, and oil pressure. There’s enough room for my co-pilot, Chris Azarko, who’s 6-5 and actually fits in here better than in a new Taurus. Ford’s done a good job with ergonomics, there’s a feeling of quality in here, and thus far, I have little to complain about. 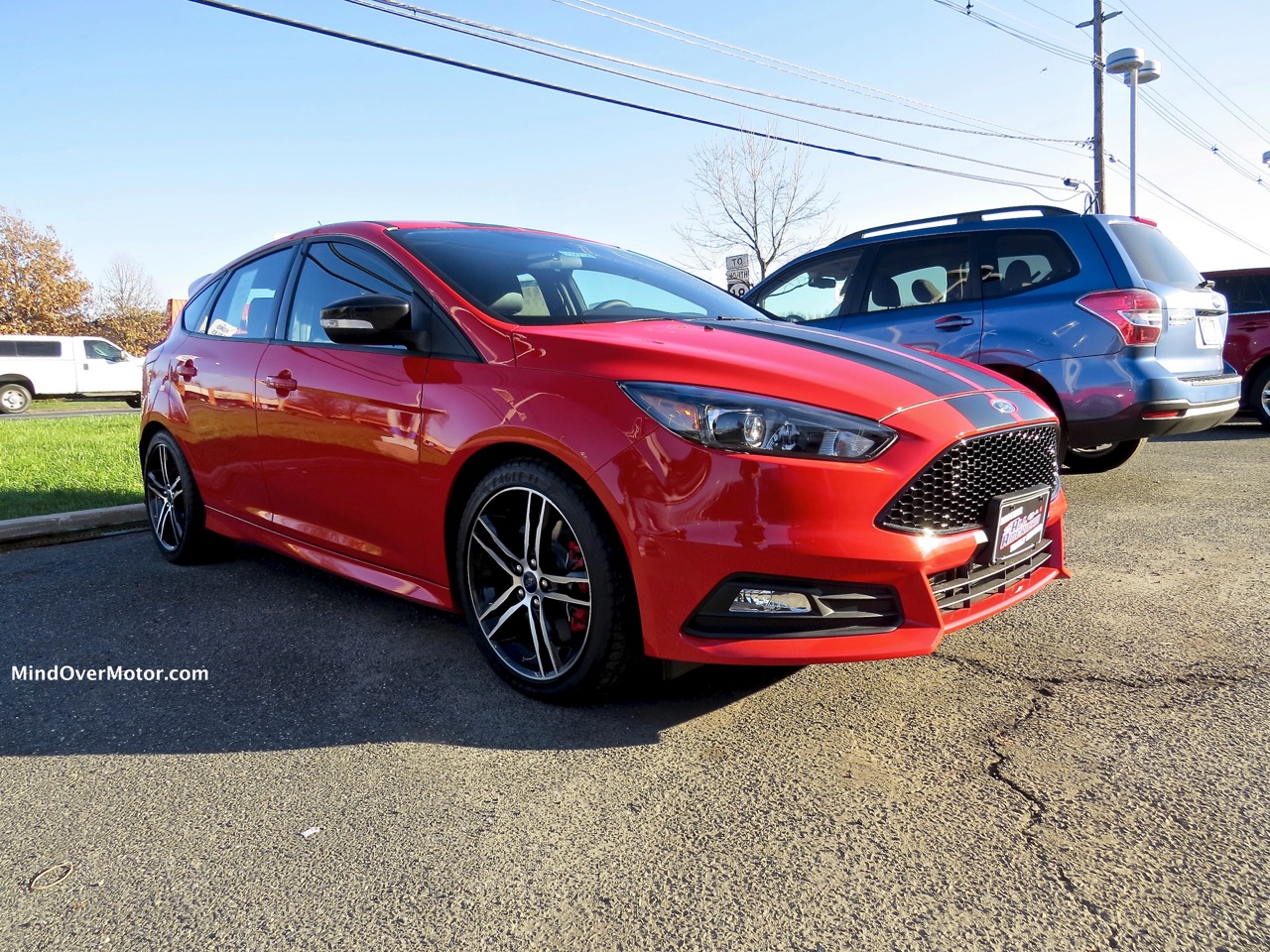 So, the Focus ST is a hot hatchback. And for now, it’s still the top dog in the Focus lineup, until the RS officially hits the streets this spring here in America. So, the real question is, can the ST still justify itself in a coming world where it shares space with the RS in the lineup? Well, after taking the wheel, I had a massive grin on my face, and no one needed to ask why. The clutch takeup is smooth–and the gas pedal, even for a car like this one, isn’t so aggressive as to jolt the car off the line. The turbo boosts smoothly and the engine note is loud but not absolutely terrifying. So, am I describing a Volvo? No. Hit the gas hard, and the ST takes off like a rabbit that’s been grazed by a bullet. 252 horsepower in a car this light, with everything sitting on the front axle, makes for a car that does torque-steer, but it’s more manageable than one might expect. 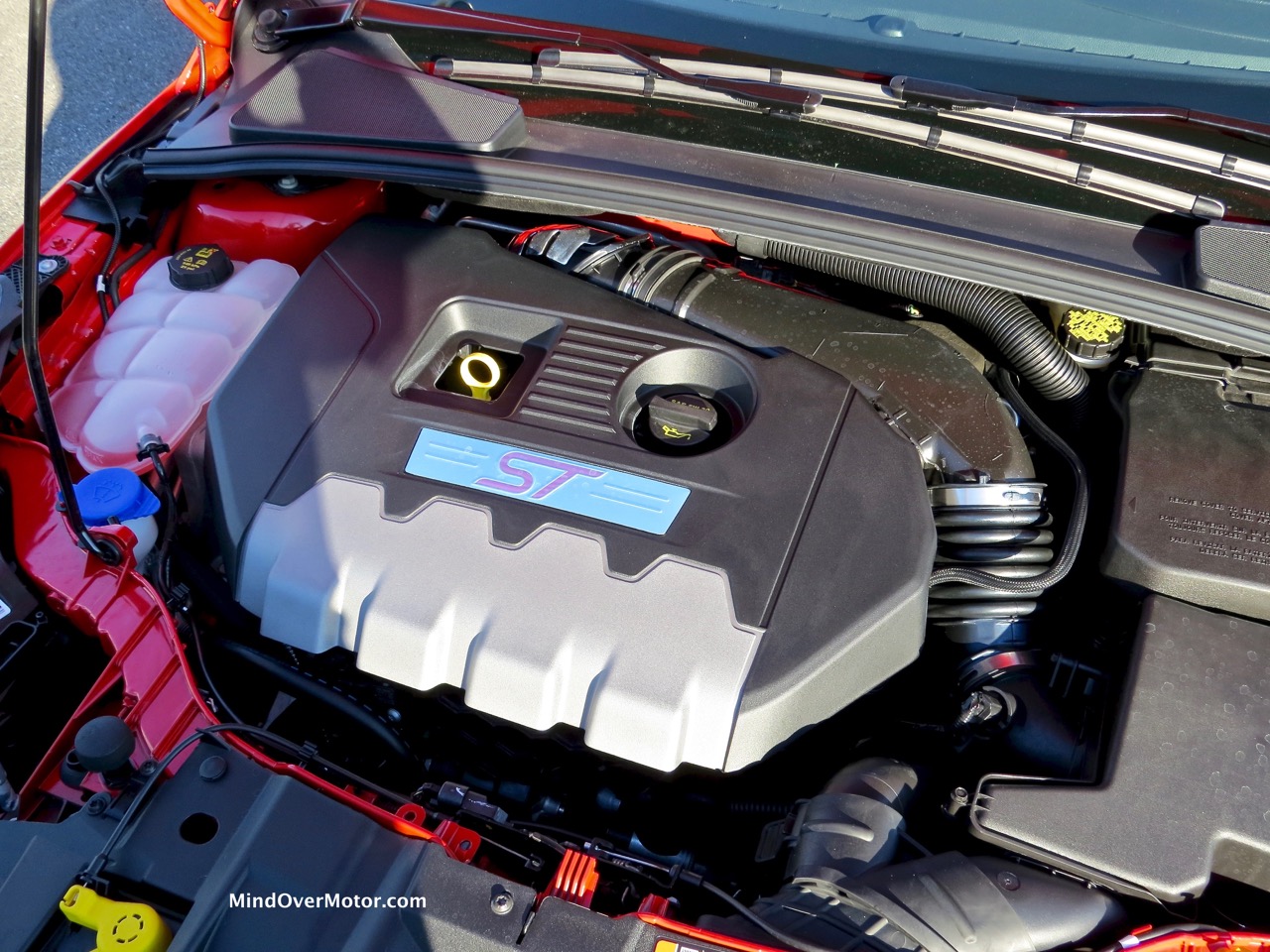 The ST’s biggest prowess is handling. Ford worked the midnight oil when developing the chassis tuning for the Focus ST, and the work they did has paid off. It begs to be driven fast. The steering is well tuned, despite being an electric rack, and the ride is quite easy to live with–certainly better than the Camaro convertible I drove last year, even over Middlesex County’s trashed byways. The brakes panic-stop remarkably well. Body lean has been kept to a minimum, too–this car is fun to toss around and can be driven aggressively without a lot of worry. It’ll understeer at the limit, but if you’re not a nutcase, relax–all is well. While the RS will likely blow this car’s doors off, this is a great car to drive to work during the week and run through a canyon from 5PM Friday to 7AM Monday. 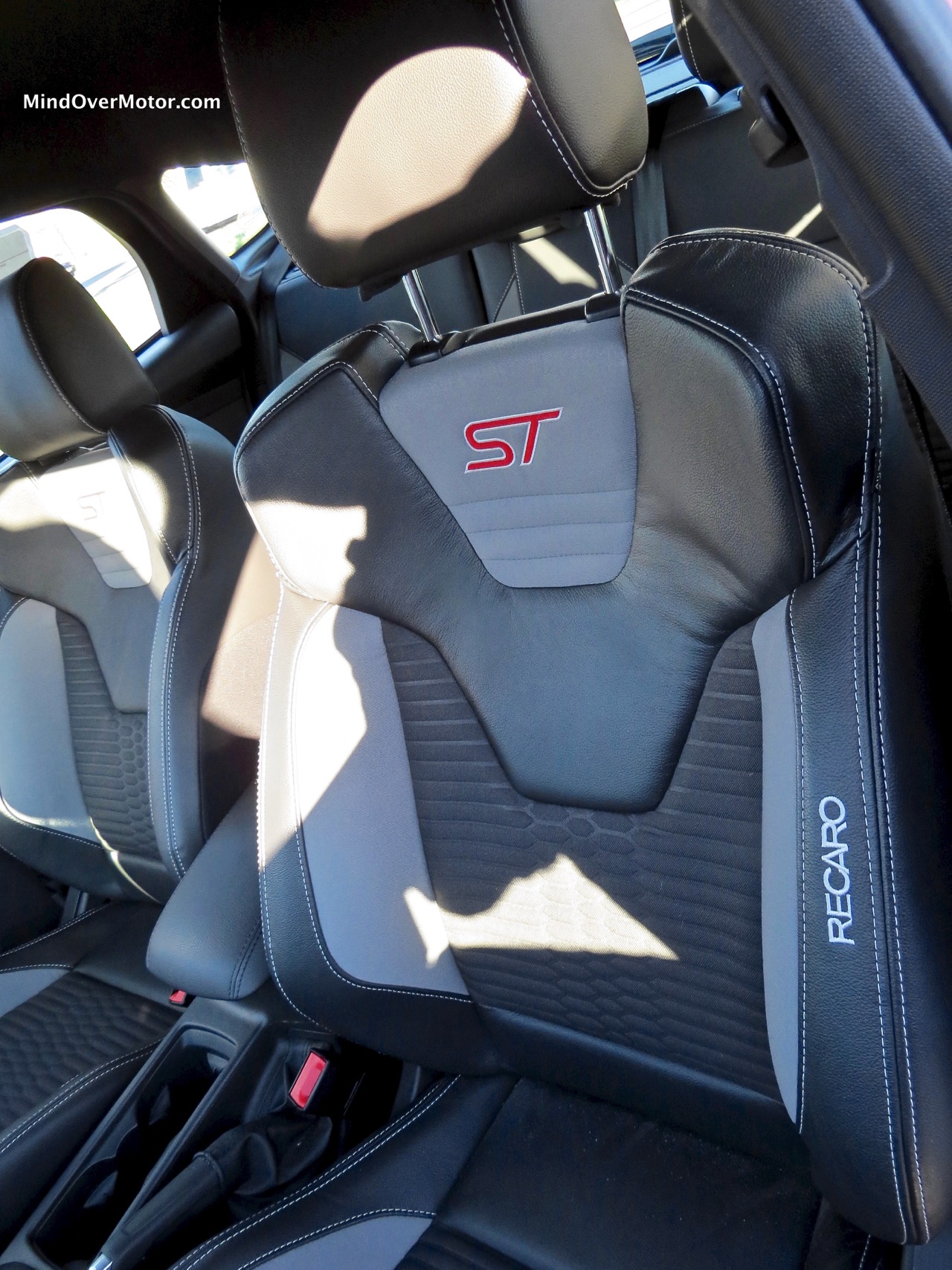 The Focus ST has a few major rivals, but the two biggest ones in this price point are the Subaru WRX and the Volkswagen GTI with the Performance Package. The Ford packs more power than the VW, but underneath the WRX. It’s also lacking in differing body styles (five door hatchback only), transmissions (only a manual transmission, which does limit its market), and it lacks AWD, which the Subaru has and the upcoming RS will feature. However, the pricetag is genuniely attractive at the moment. It costs more than the GTI and WRX at a base level but when fully optioned out, undercuts both cars–the test car I had was around 30 grand and included heated Recaro leather seats, GPS navigation, SYNC (which is far better than you’d think), MyFord Touch (which has also improved massively since launch), and a heated steering wheel. For $30K that is a lot of equipment, and a fully loaded GTI (which does have more toys, such as advanced cruise control and blind spot detection) will cost thousands more and have less power. The WRX will also be more expensive out the door with all the boxes checked. 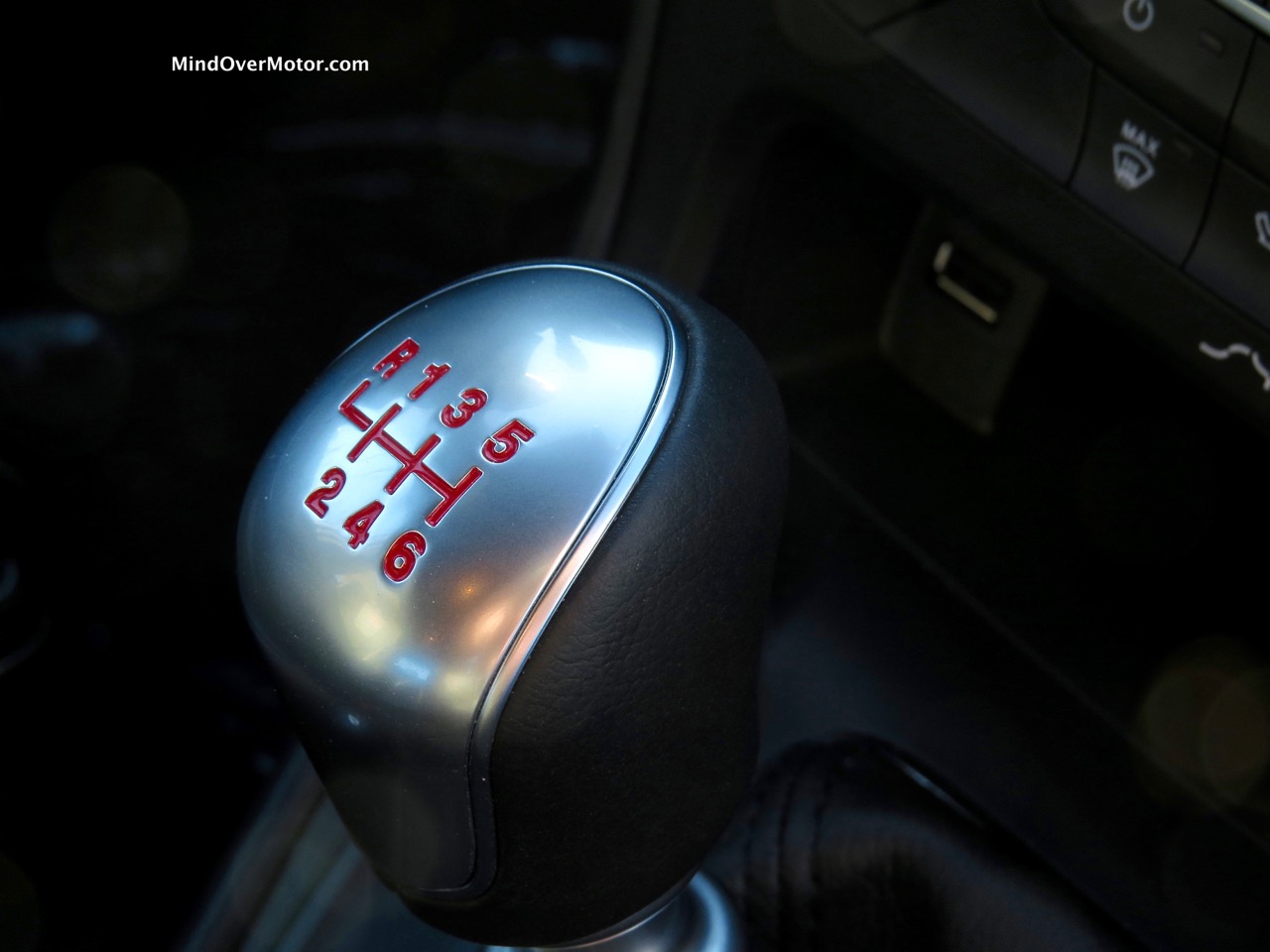 The Focus, thanks to the fact that Ford put in the hours in its initial development so well early on, has a lot of real-world benefits that will make buyers think. The visibility is excellent, and there’s plenty of room. Gas mileage isn’t bad at all either, at 22 city, 31 highway–which is good for a hot hatchback, especially one this fun. With the Focus RS coming in a few months, the ST is still an excellent buy–and likely it won’t get marked up, which will probably happen with the RS when it hits dealer lots. So, is it worth its price? Yes it is–and it’s a daily driver that I’m now openly considering if I can’t be bothered to pay a markup on the RS. The fact that the ST is this good is an invigorating indicator that the RS will give America a car to be proud of. 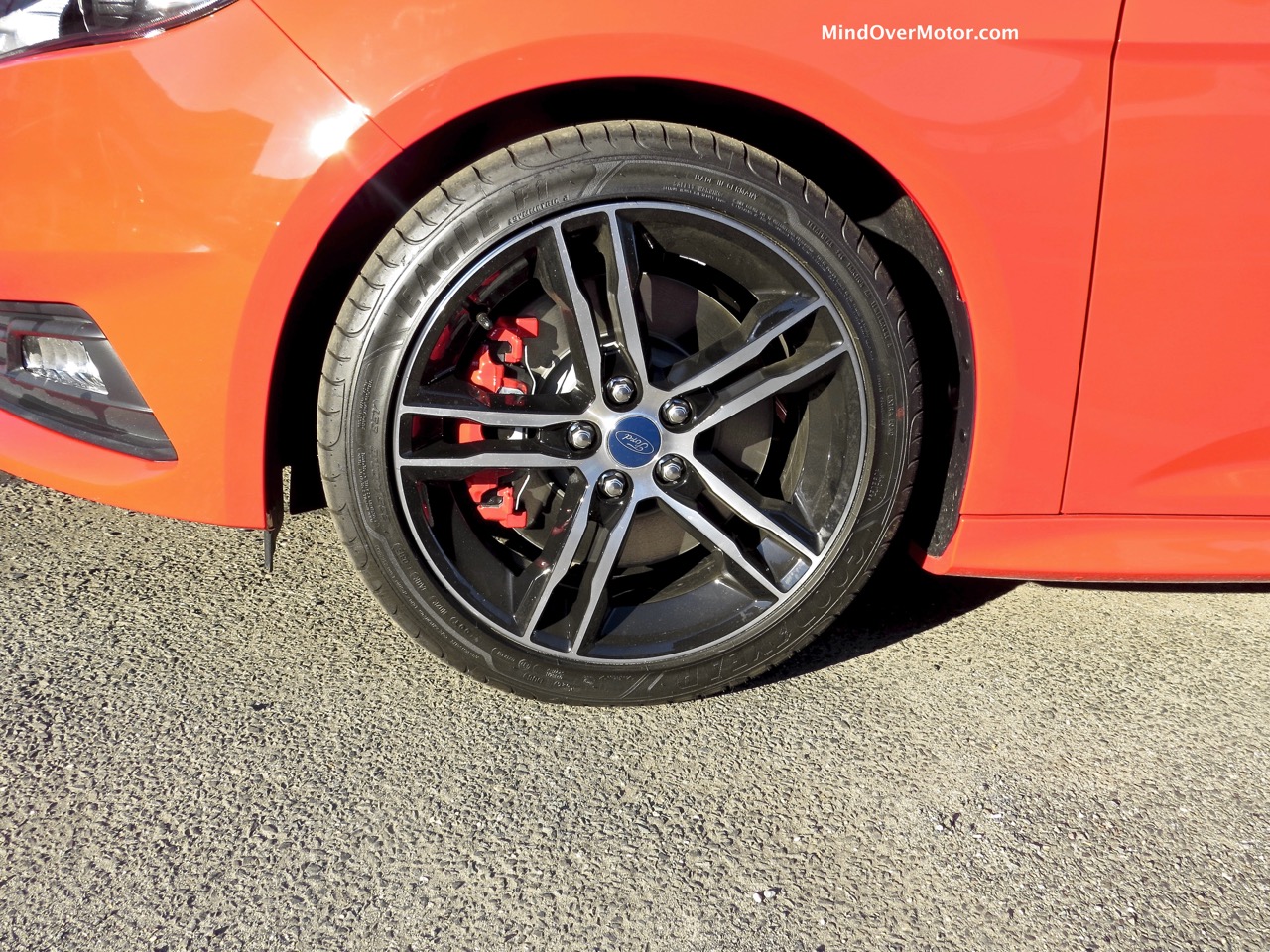