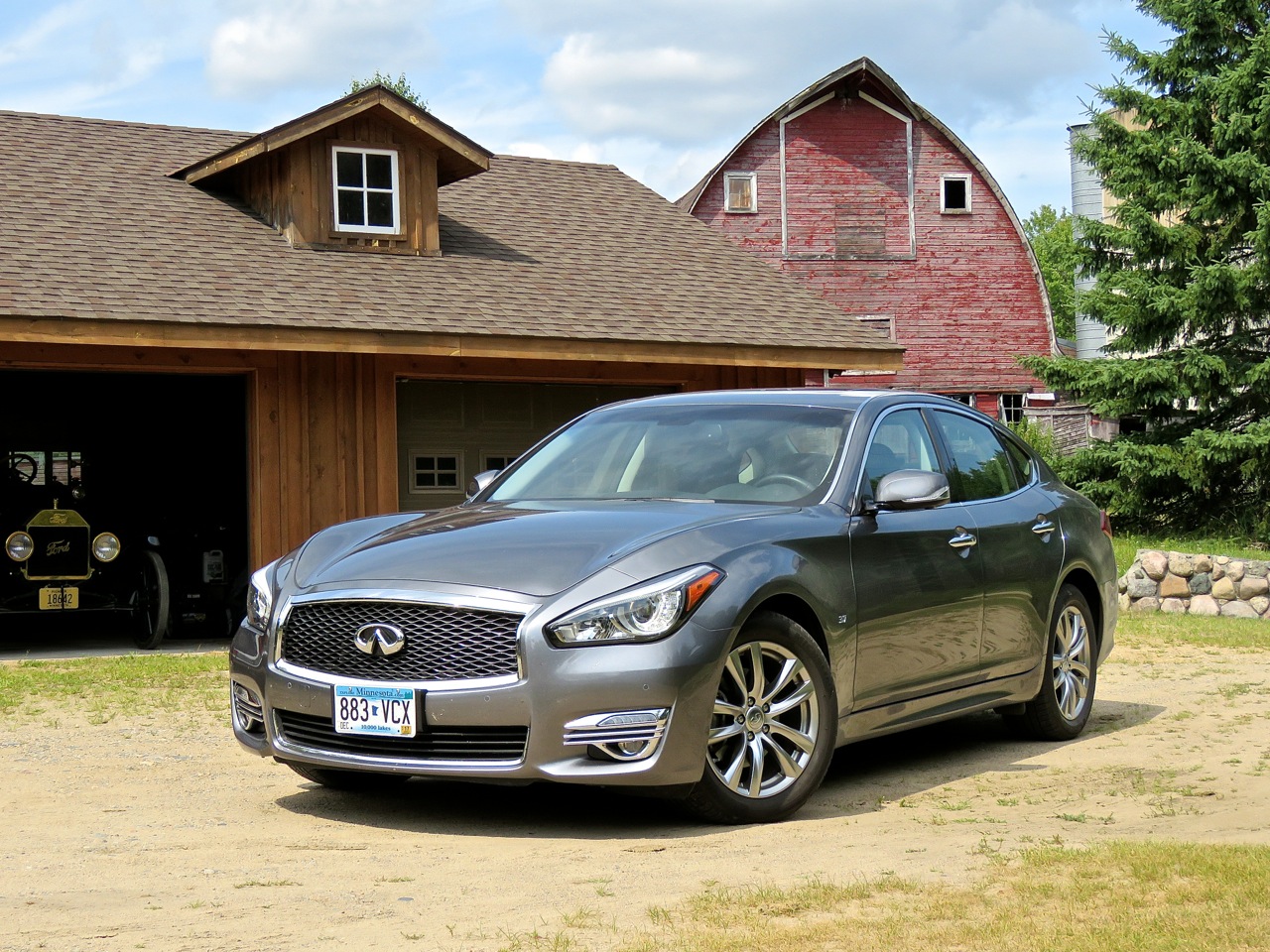 I spent a weekend with this Infiniti Q70 while visiting my family in Minnesota. I decided to splurge on the rental because I knew the trip would have a lot of long drives in only a few short days. My Uncle George’s house on the lake is around 3 hours away from Minneapolis, so the drive actually takes longer than the flight from Philly. We were also planning to visit my Great Uncle Bill, who lives about an hour and a half away from my Uncle. So we were guaranteed at least 9 hours of continuous driving on big open roads during this trip, might as well have a car that would make it a pleasure!

I had originally booked a “Q50 or similar” but the Q70 is what they had available. It’s a car I’ve always managed to forget about, but I knew it would be nice for the drive. By the end of the trip, the Q70 had made me a big fan. It went from fairly anonymous in my mind to a practical favorite… and I had just recently driven the all-new BMW 540i. 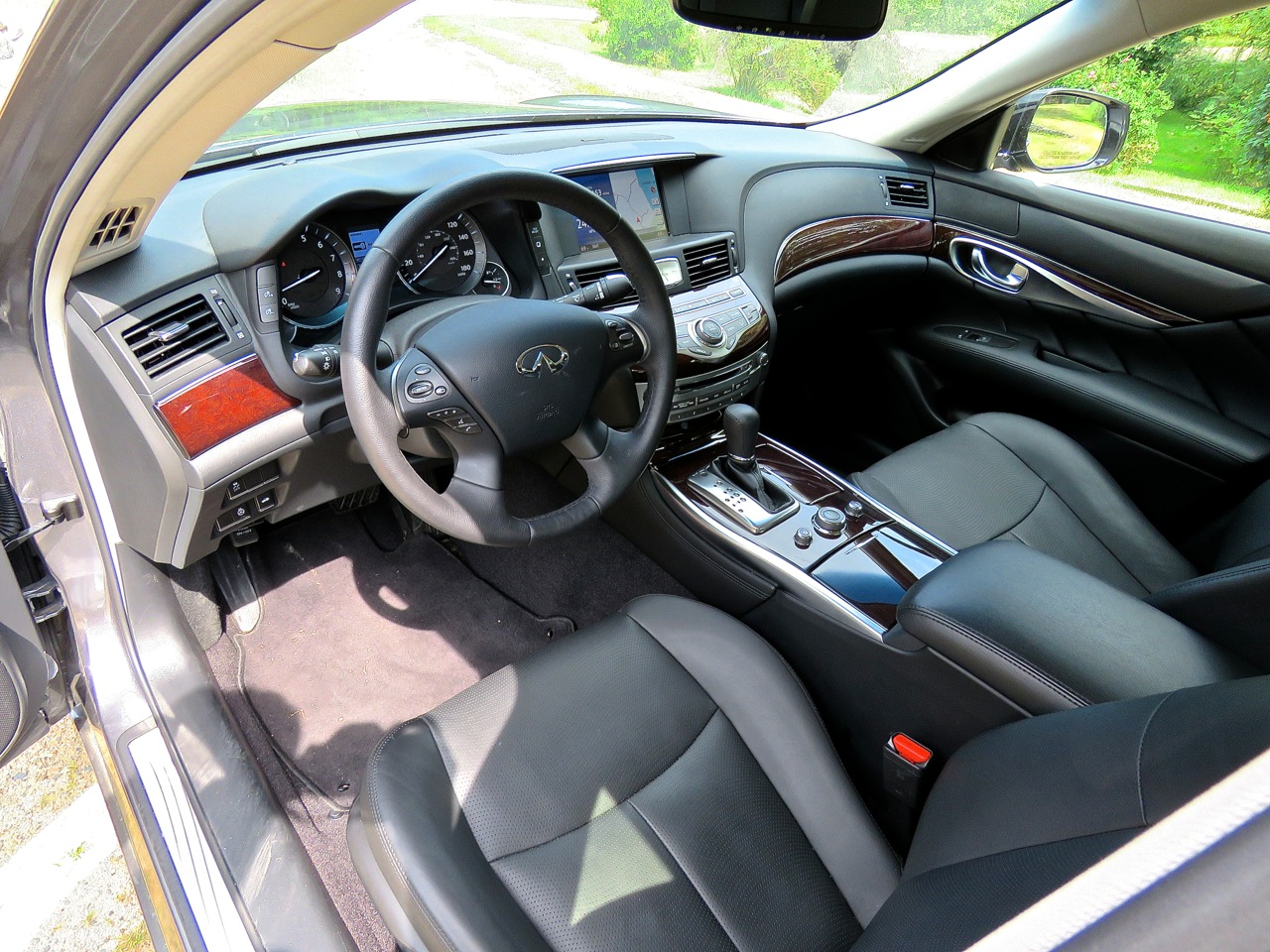 Look, the Q70 / M37 has been out for quite a while now, since 2011. There’s really nothing new about it to report, but in a way that was my favorite thing about it. The Infiniti Q70 is wonderfully tried and true at its core, with enough fancy toys added on over time to keep it fresh.

The surround-view camera is a lovely piece of tech, and the camera in the nose became my new favorite thing when parking.  The Q70’s interior is plush and spacious with a good amount of room to stretch out. The gadgets are all modern as can be, but underneath is a refreshingly old-school full-size sport sedan, the sort of car that the BMW 5 Series used to be. 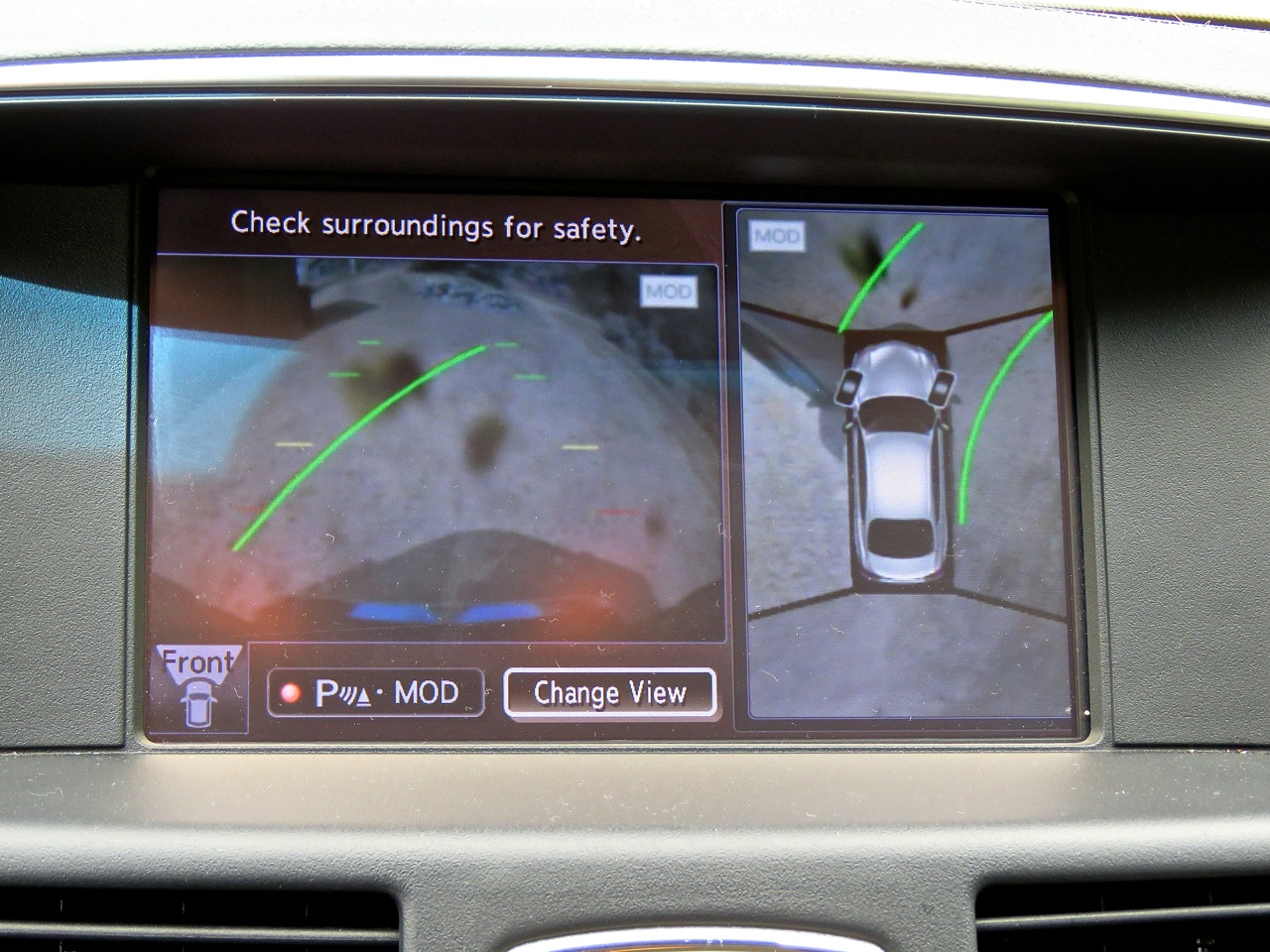 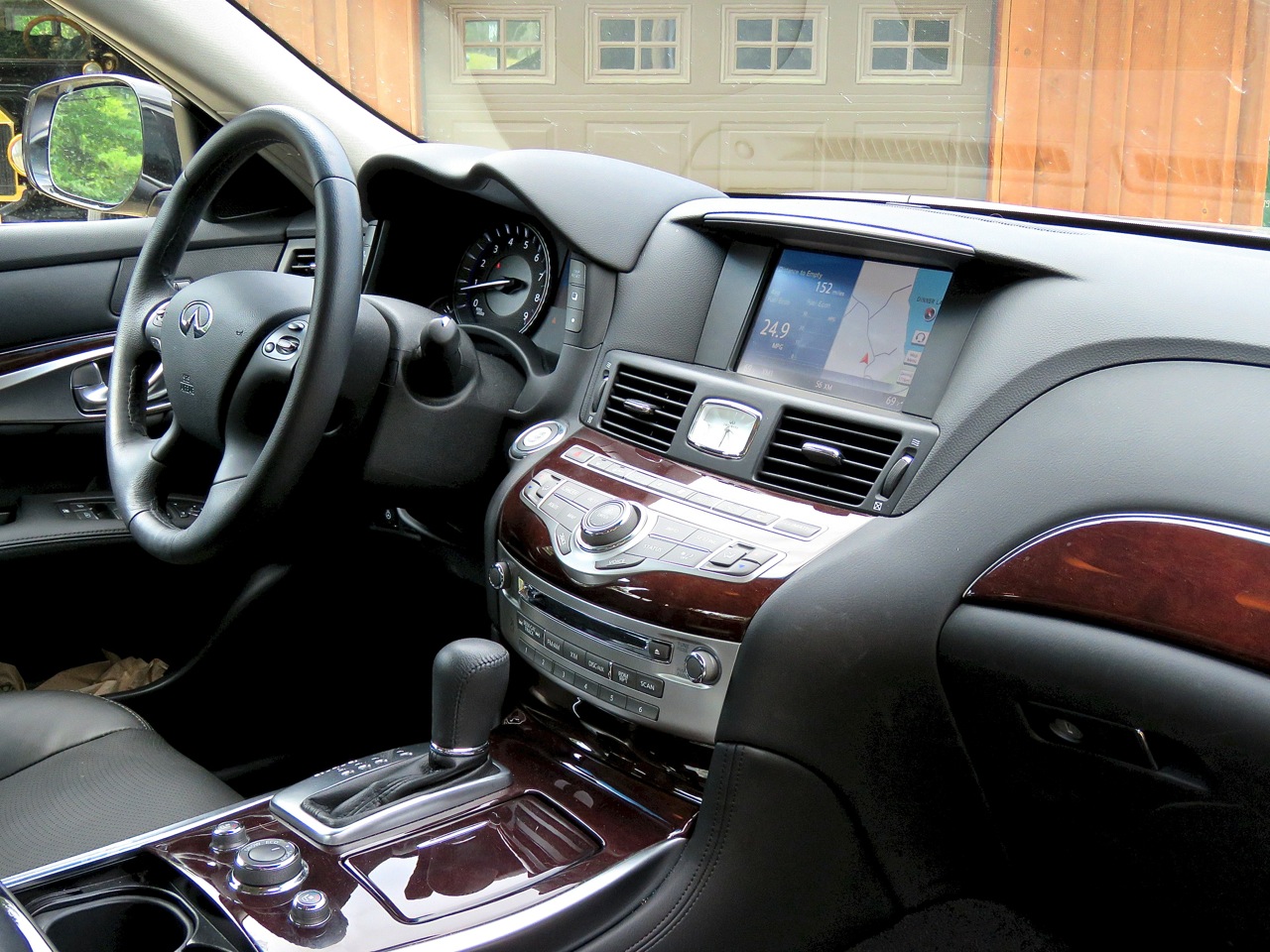 It’s 3.7L V6 comes right out of the Nissan 370Z, so it has the energetic heart of a sportscar when the devil dares you. There are no turbos, and 330hp doesn’t put it at the front of the performance pack, but it’s got a satisfying character and it’s still very fast on the road. I knew it had a good engine, but what really sold me on the Q70 was the rest of the way it drove. It doesn’t try to do too much for you, and I love that. The chassis is very competent and nicely balanced under the soft layer of comfort on the surface, just like an old BMW. The steering isn’t hyper-sharp, but it’s responsive and intuitive, a nice balance between sporty and relaxed. At under 3,900lbs, it’s a big car, but not too big by modern standards. Compared to something like a big Audi A7, the Q70 feels genuinely chuckable. I love that it doesn’t put on a sporty facade that fades away as you push it harder. It’s a real “wolf in sheep’s clothing,” and it’s very refreshing at a time when most cars are trying to fake it. 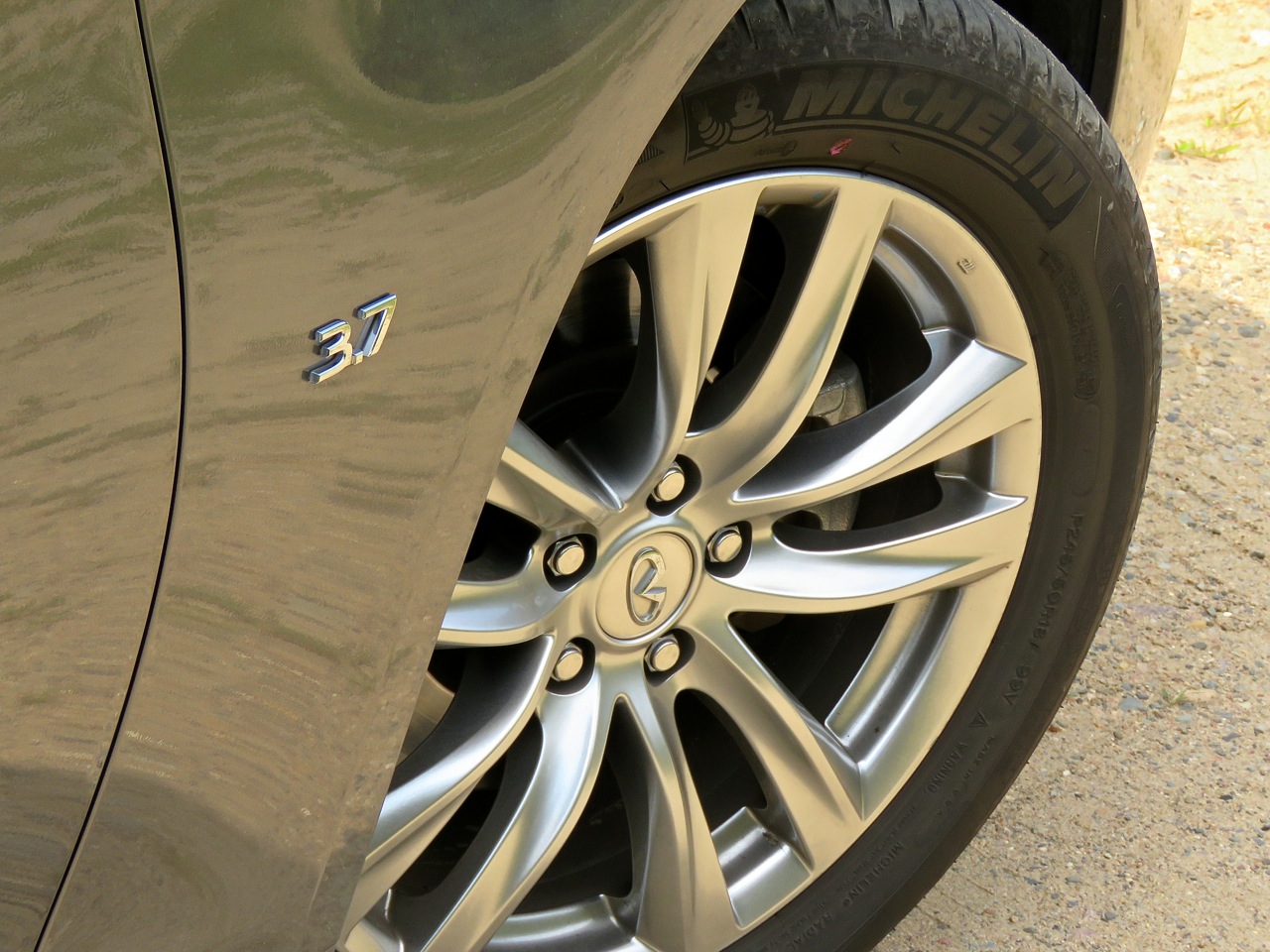 My favorite thing about the Q70 was its transmission, though. It’s nothing all that fancy by modern standards, but it just works exactly as it should. Again, it also doesn’t try to do too much for you. If you put it in manual mode, it’s in manual and it won’t shift until you tell it to. (BMW’s, on the other hand, will downshift for you if you floor the throttle whether you’re in manual mode or not… it’s infuriating.) Sure, there are better, crisper shifting gearboxes out there, but this isn’t a high-performance model, it’s a six-cylinder sport sedan. It does what you want it to do when you tell it to do it. I think that’s a simple ask of a modern gearbox, but you’d be surprised how many carmakers get it wrong when they try to make it do too much.

My big takeaway from my weekend in the Q70 was that it’s a luxury sport sedan in the truest sense. It’s not the fanciest, the fastest, or the most technologically advanced, but it’s so damn good at the fundamentals of everything it does. If it were dinner, it wouldn’t be the most adventurous dish, but it would be steak and potatoes done properly. 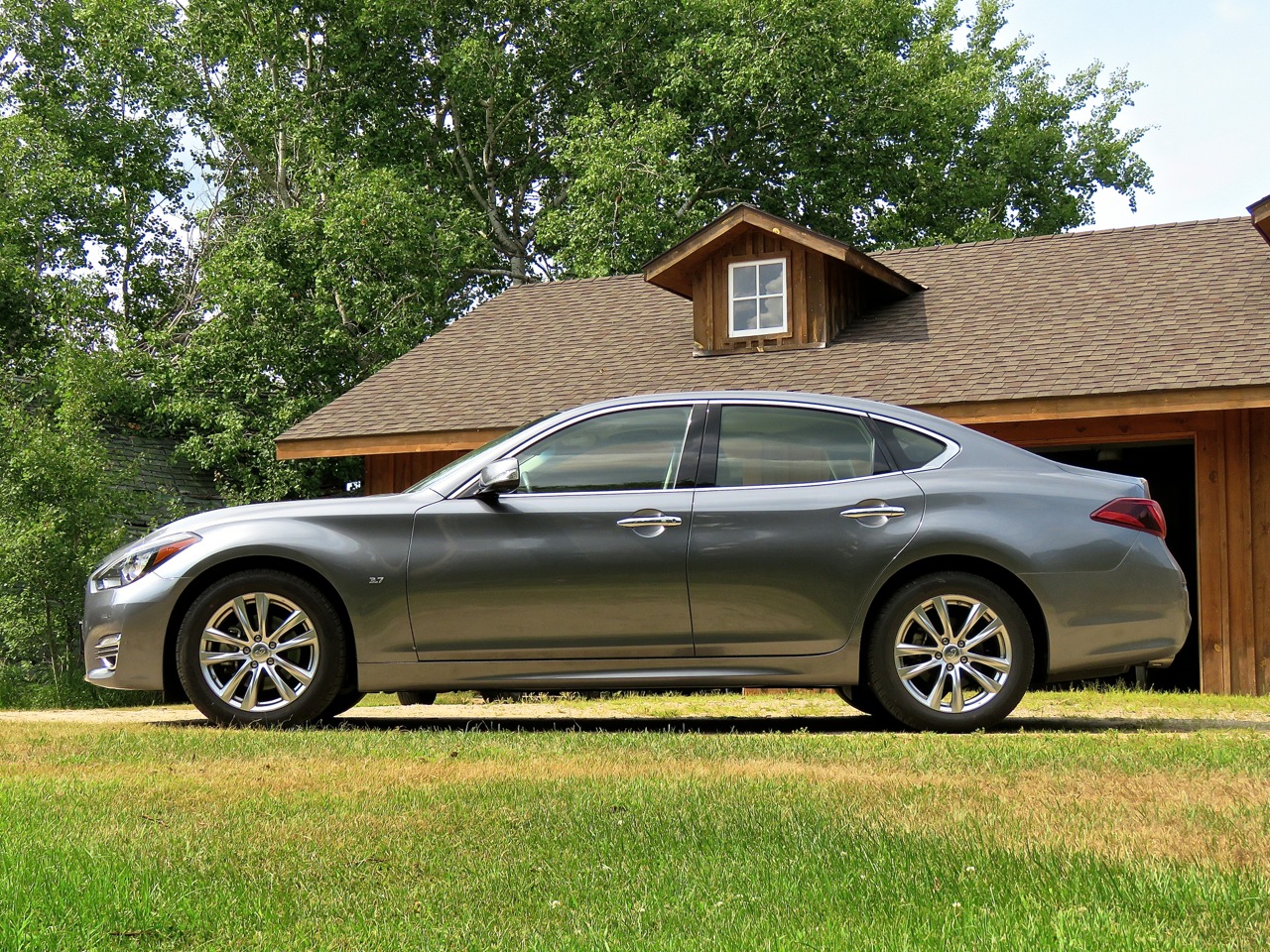 The Infiniti Q70 is a car that is usually overlooked. It never really had any hype the begin with, but 7 years into its life, it’s really off the radar. Infinitis, like Lexus’ continue to be the more-dependable alternatives to the heavy-hitting Germans. The difference now is that the Japanese cars are getting better in terms of driving, and the German cars are getting worse. In fact, I’d argue the Q70 is more appealing now than it was back in 2011 when it arrived as the M37. This Infiniti’s lack of complication is its charm. 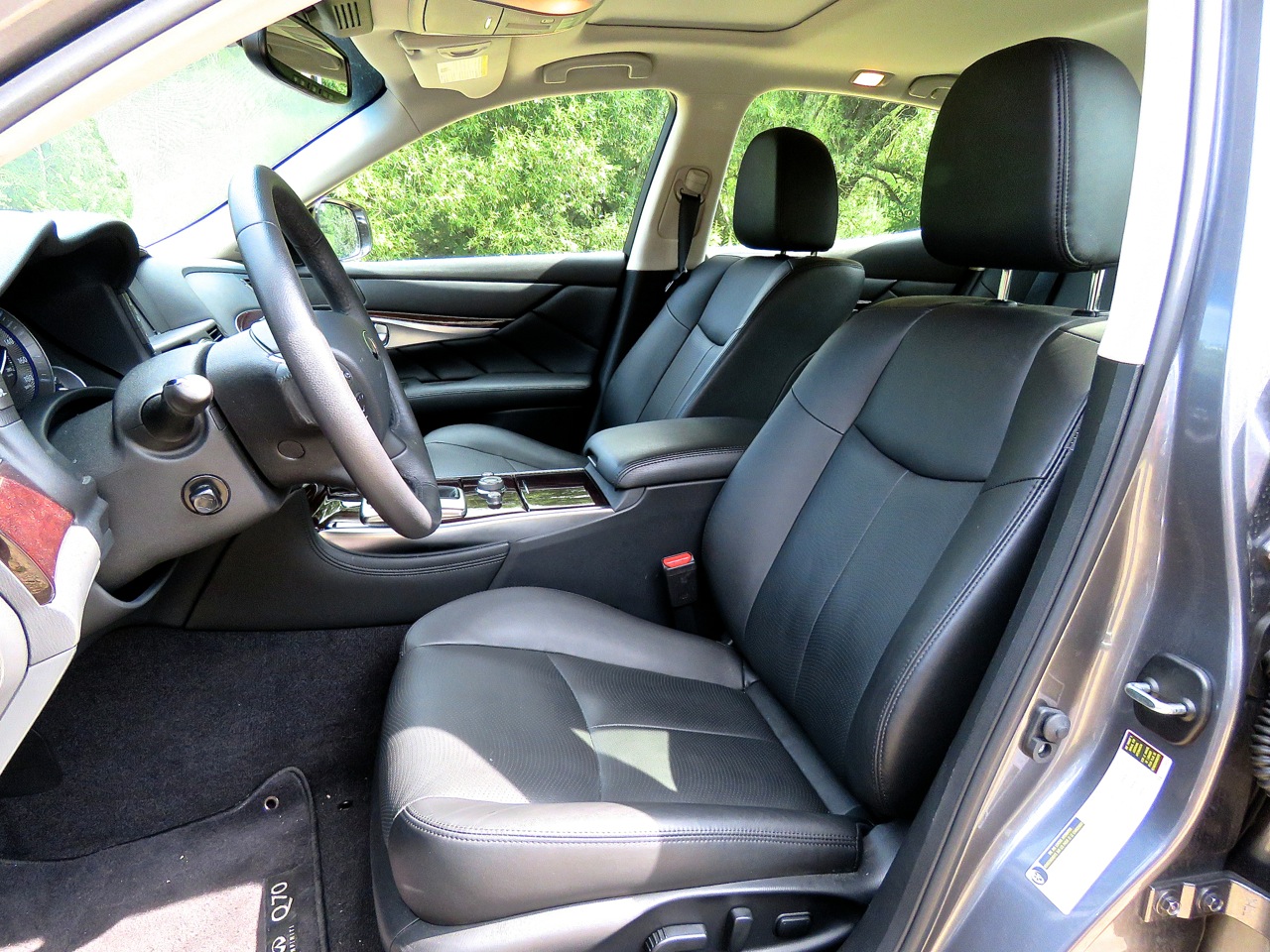 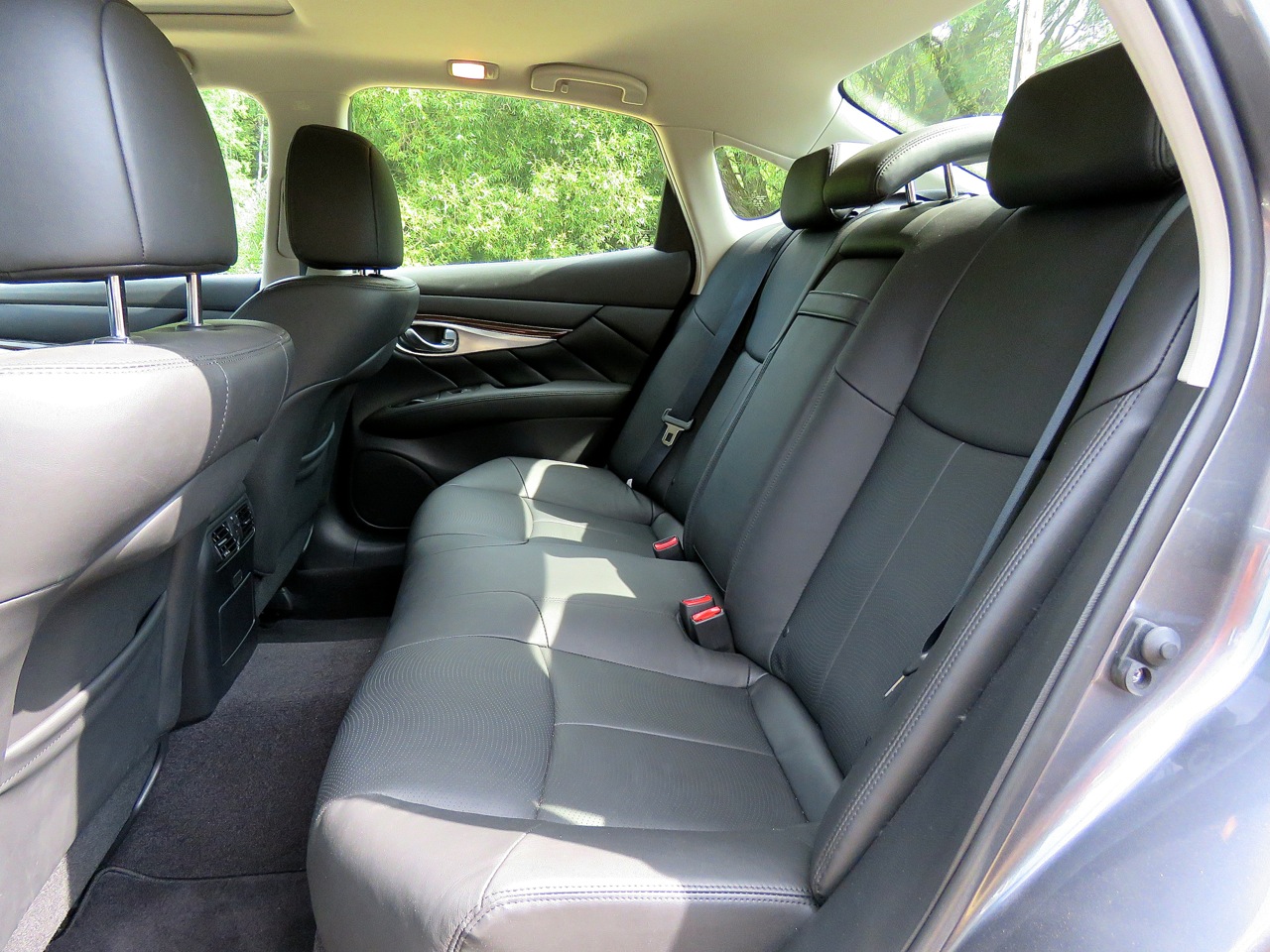 The wide open roads of Minnesota stretch for hundreds of miles at a time, and for much of it you’re essentially in the same large field you were in an hour earlier (an easterner’s perspective lol). The Q70 covers large amounts of ground comfortably at whatever pace you ask it to. It’s happy to hug the speed limit if you want, or cruise at autobahn speeds when the police are nowhere in sight. It’s a very decent grand tourer, if we can call it that. It’s pretty, it’s comfortable, and it’s quite fast. Perfect for touring the wide open countryside. 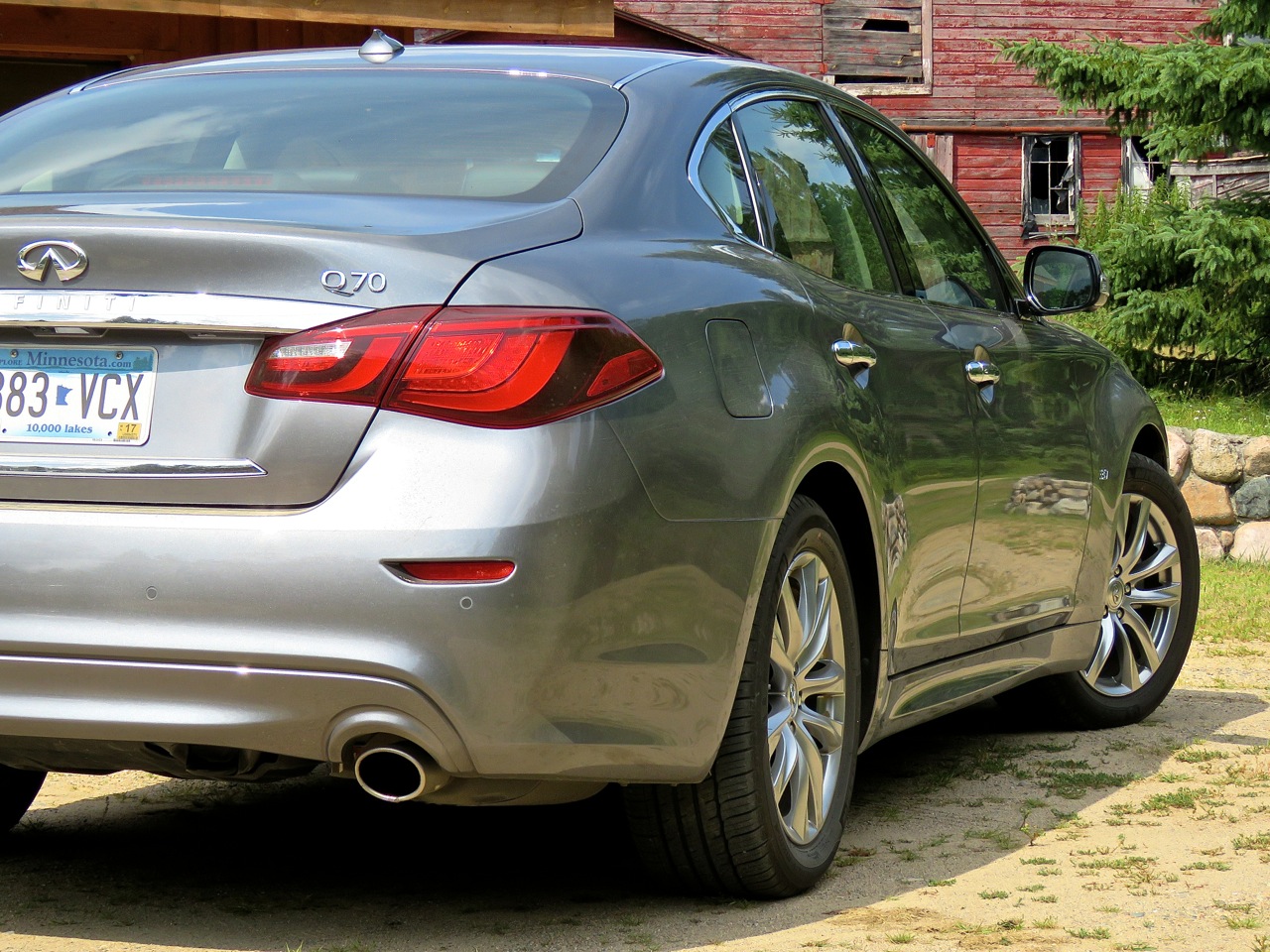 As you can tell, I really liked the Q70, and I think it has a lot to offer. It’s a really nice package. It’s handsome-looking, fancy inside, fast, fun handling, and known to be reliable.

I do recommend buying this car, but do it in the right way because it’s near the end of its life cycle. 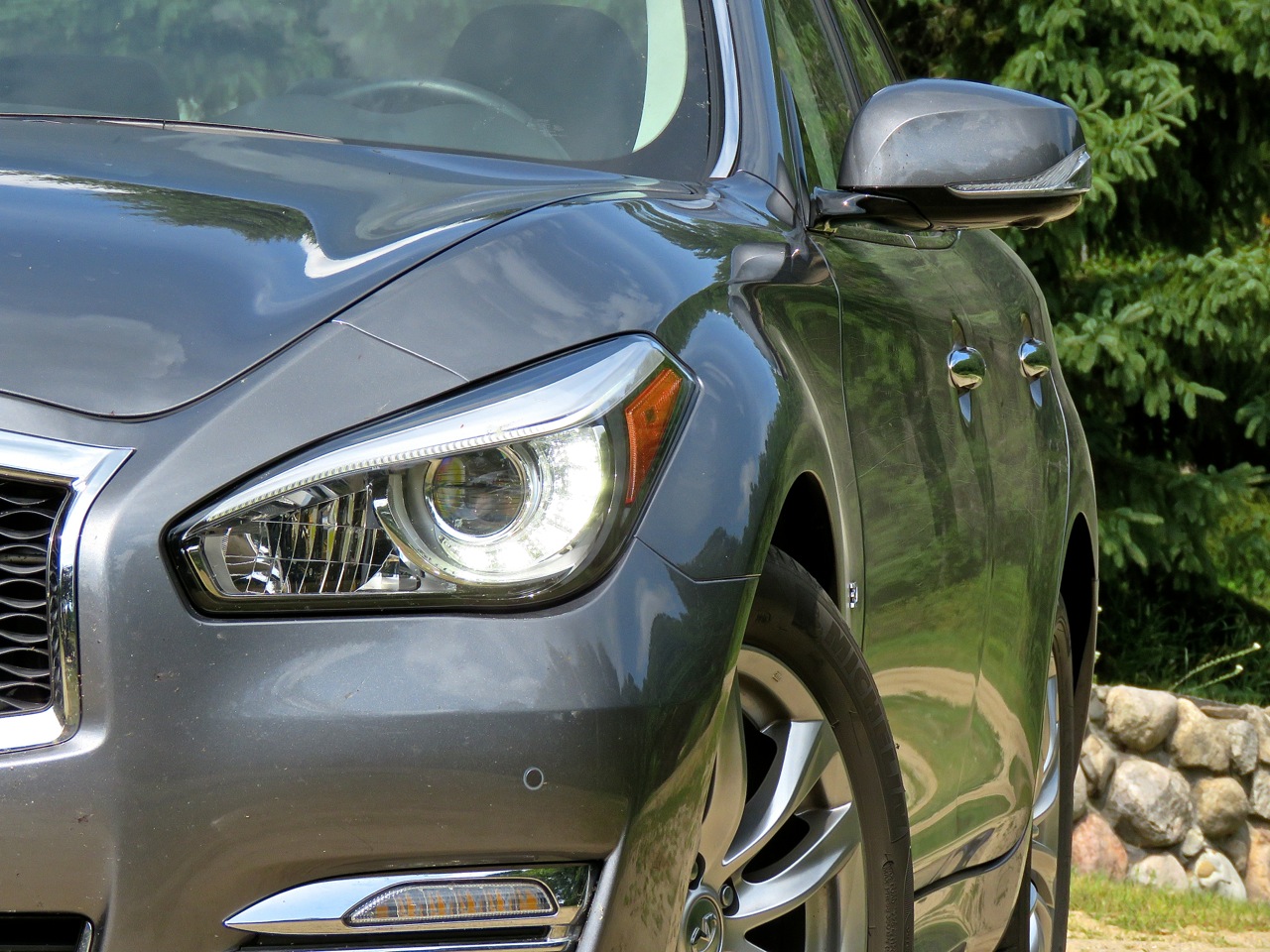 If you’re looking at a brand new one, I’d recommend leasing unless you plan to keep it for a long time and drive it into the ground. It is a solid $50,000 worth of car, but try not to spend too much more than that.

I also definitely recommend buying a used Q70 or M37 for a fair market price. They’re a great luxury option you can generally depend on even after other owners have put more than a few miles on them. After my impressive weekend with this car, I advised my buddy, Tony, to get a used M37 for well under $20K, and he absolutely loves it so far. 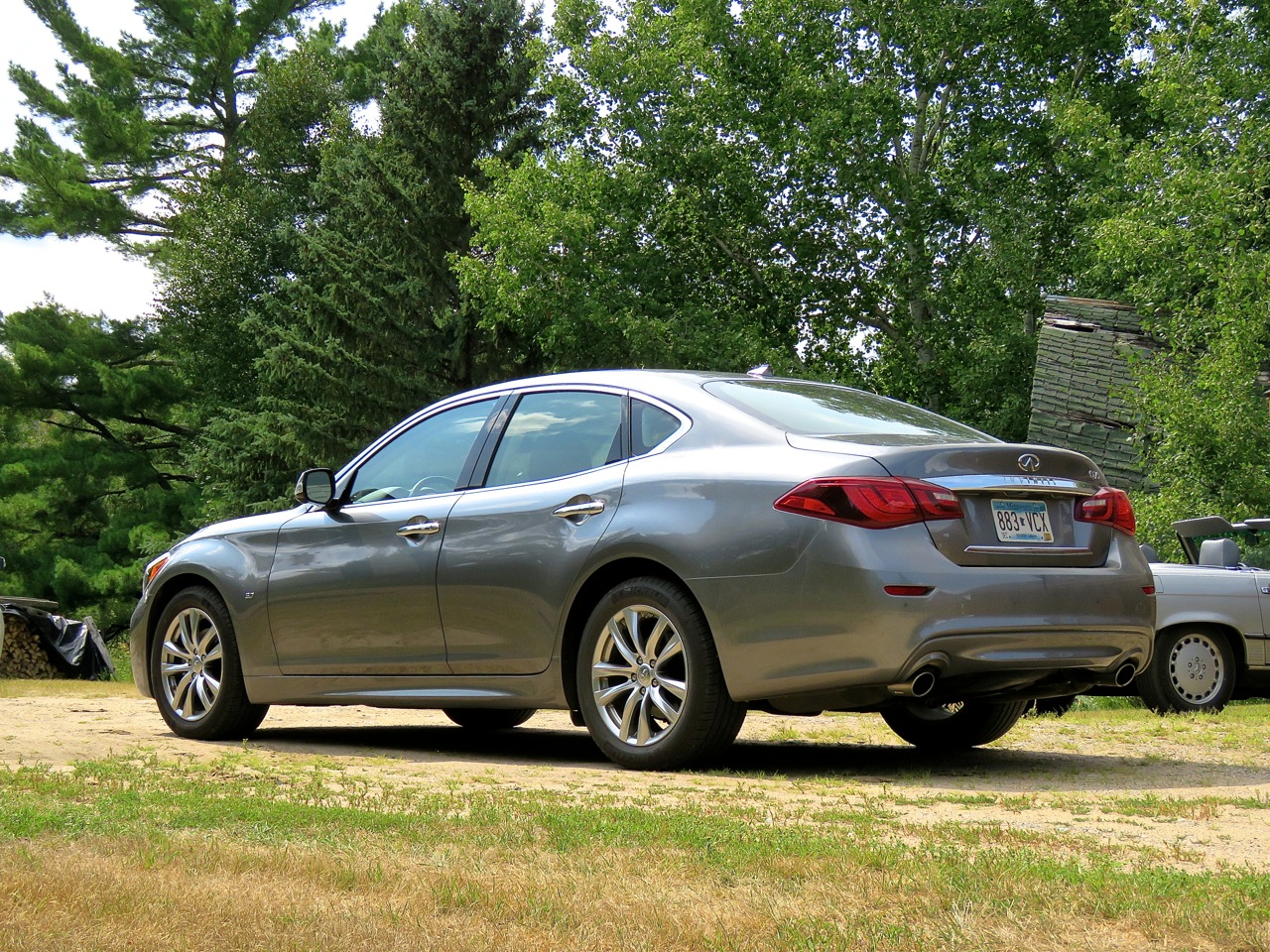 In all areas of the market, I’d say the Infiniti Q70 / M37 doesn’t “have everything,” but it’s also missing nothing.  Its old-school charm also gives it a special appeal here in 2018.

One thought on “Infiniti Q70: Luxurious and Sporty with a touch of Amnesia”