Four-door coupes are one of the fastest-growing segments in this country.  Mercedes started the ball rolling with the CLS, and as of now, the other two German luxury brands have answered the call with interpretations of their own.  BMW recently launched the 6-Series Gran Coupe, while Audi started selling their entry last year, the A7.  Towards the end of December 2011, my father and I stopped by the local dealer and drove this stunning white example to find out how good the A7 is.

At launch, the Audi A7 marked a change in Audi’s offering of engines similar to the A6.  No non-S V8 is available–in fact, only one engine was offered at the time, but that was no reason to fret.  The standard engine in this swoopy AWD pillared hardtop is Audi’s excellent 3.0L supercharged V6, offering up 310 horsepower.  The S7, which is about to go on sale, will offer a twin turbocharged 4.0L V8 with 420hp on tap.  The A7 follows in the CLS’s footsteps via offering only a four-place layout, with a very luxurious interior and much sexier lines than its mainstream companion.  The A7’s swoopy exterior is gorgeous, with a flowing roofline and a stretched front end that give a sense of constant forward motion and a feeling of futuristic thought.  Inside, the design is the same idea, with flowing lines and modern shapes abound.  The build quality is of course top-notch, as to be expected in a $60K-plus sedan.

The interior design is a mix of traditional materials and new materials. The standard interior trim is bright aluminum and looks very crisp, but the option worth paying for is the natural wood trim paired with a light tan interior, which looks simply stunning. My tester was a more basic model, but that did not make much of an issue. The interior amenities are plentiful as well, with a top notch Bang and Olufsen unit available as well as Audi’s MMI interface. The A7 adds a new feature for the navigation system as well, which allows the driver to literally spell words using a tip of a finger.  A small touchpad is mounted in the center console where the driver can simply write the name of a destination letter-by-letter (or number by number) without ever using the voice control.

The rear is a nice place to sit as well.  While my father drove on the first go-round of the route, I lounged in the back seat and enjoyed myself.  The rear seats are very comfortable and the ride from the rear and the front is firm, but never punishing or overly stiff.  The shocks are well-damped and the cabin feels very airy despite the low roof (this may not be the same for taller passengers).  The seats offer plenty of comfort but are also firm in keeping with the A7’s sporting intentions.  The rear also of course includes cupholders and rear air vents.  After lounging in the backseat for 20 minutes and exploring what the A7 had to offer as a passenger (while my father drove), I took the wheel and he took the back seat.

At first, the A7 feels like a typical large Audi, with somewhat light steering at low speeds and good sight lines.  The instrument panel is nice and clear, and despite the multitude of buttons on the dash, is very easy to master.  The touchpad to spell out words for the navigation system is incredibly easy to use and picks up on handwriting very easily.  But, most importantly, the A7 drives like a much more capable car than its 300hp and fairly large size would suggest.  Thanks to the engineering time put in by Audi’s people, the A7 hustles down back roads like a champ.  The steering (in the sharpest setting) communicates well and gets heavier, the brake pedal is nicely modulated and feels strong at all times.  Even in its firmest setting the ride is still smooth enough, proving that the A7 can ride and handle at the same time without ever feeling like a big compromise.  The engine’s power is exhilarating.  The supercharged V6 (although Audi insists on using the “3.0T” moniker) packs a serious punch and feels perfectly tuned in this car, offering up a great sound and plenty of torque.  The transmission is very responsive too and makes the most of the engine’s 310hp.  It shifts smoothly in both automatic and in manual settings.  The throttle response is well controlled as well. 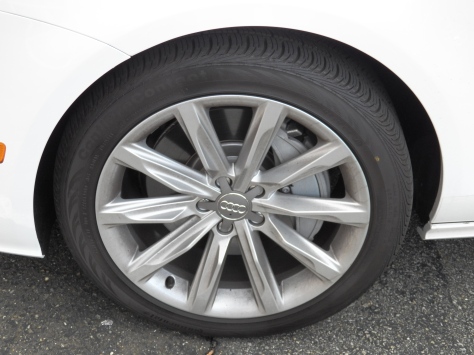 So, who is this Audi really for?  It’s for anyone who wants something that’s off the beaten path, among others.  This new fastback is not at all a typical sedan. It accommodates like the more conventional A6 but is more exclusive and much, much more modern.  I personally believe Audi knocked one right out of the park (and into the Mercedes CLS550’s rear window about halfway up the parking lot).  It has its flaws, but they’re few and far between, as this i sa car with class, performance, and a sense of identity that the luxury market just doesn’t have.  BMW will have a very tough act to follow once the 6-Series Gran Coupe hits the streets this fall. 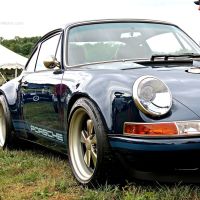