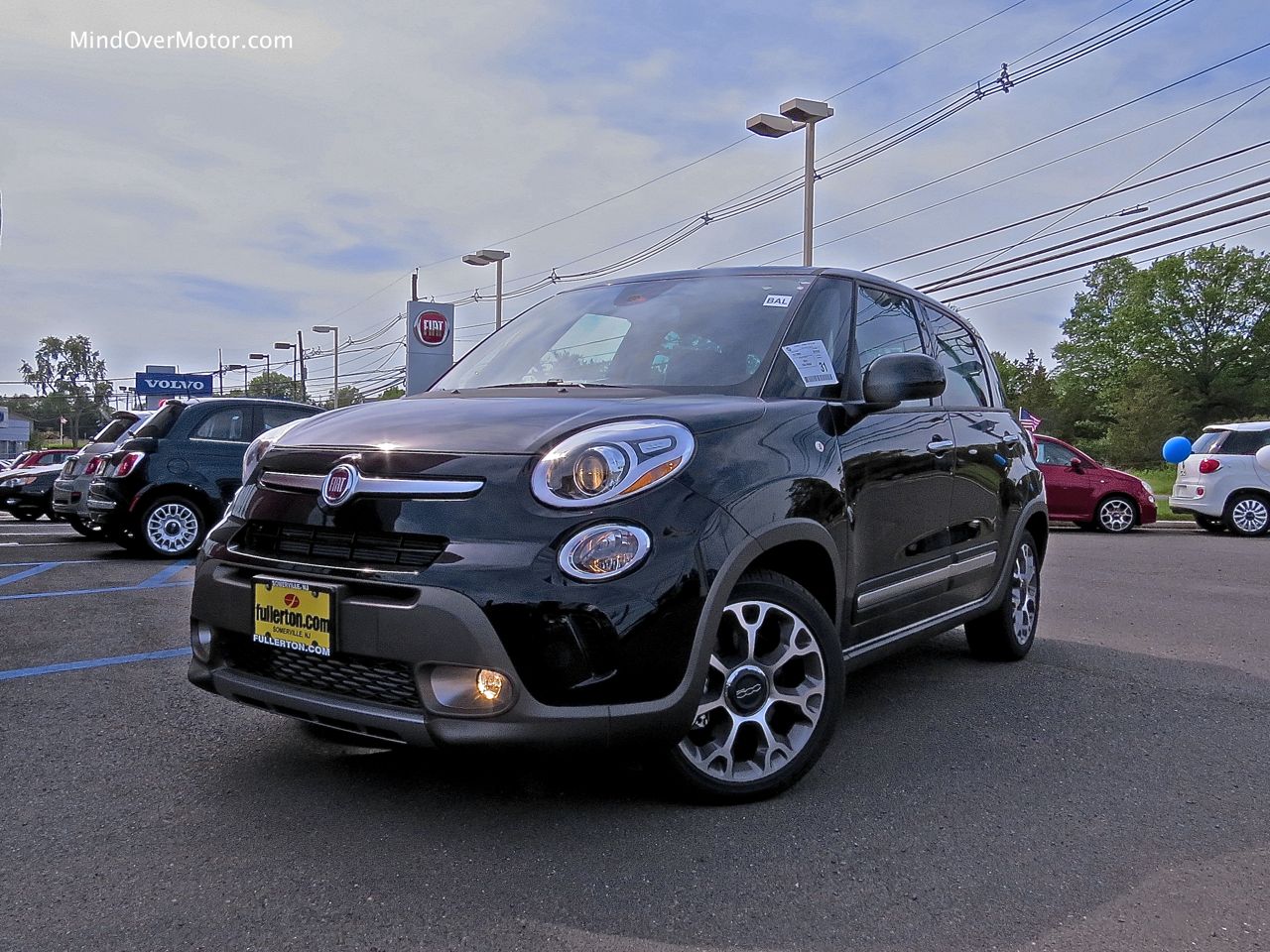 Fiat has been doing a pretty good job of marketing whatever new product they have.  They have come a long way from the cringe-inducing “Jenny From the Block” ads that were running a few years ago, to running ads with P.Diddy and a little kid to advertise their newest creation.  The 500 was a hit for them worldwide and in America, they’re certainly selling pretty well.  In fact, there’s been a new kid on the block for them in the past year or so now, the 500L, a four-door model designed with the small family in mind.  Fiat needs all the sales it can get right about now, as the 500L is in a tough marketplace and has not been getting a good amount of positive press.  I decided to take myself to the local Fiat showroom a few miles away and see what the fuss was all about. 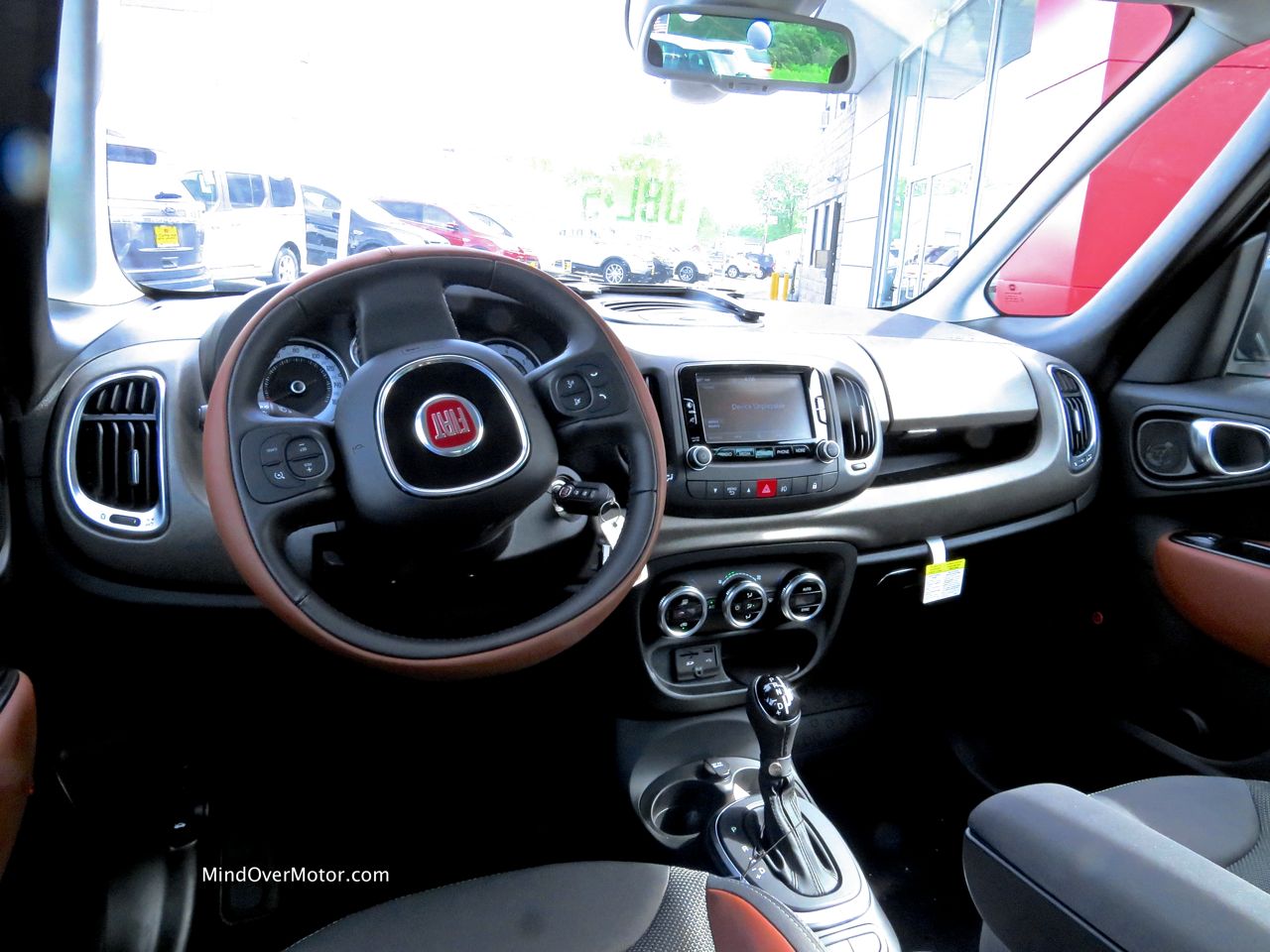 Upon talking to the dealer, it became clear that the 500L is a car that they’re banking on hard to expand the Fiat name in America.  The exterior isn’t too bad.  I like the shape, it’s honest and not trying to be something it isn’t.  It’s hip, but not desperately so.  The side profile could use some work, as it’s got some awkward shaping toward the rear bumper.  The front end is handsome and has a lot going on, while the headlamp finish adds some strong depth to the facade.  The roof looks good as well.  Thanks to a strong set of color options, the 500L doesn’t look drab in any of its colors, not even in gray or silver. 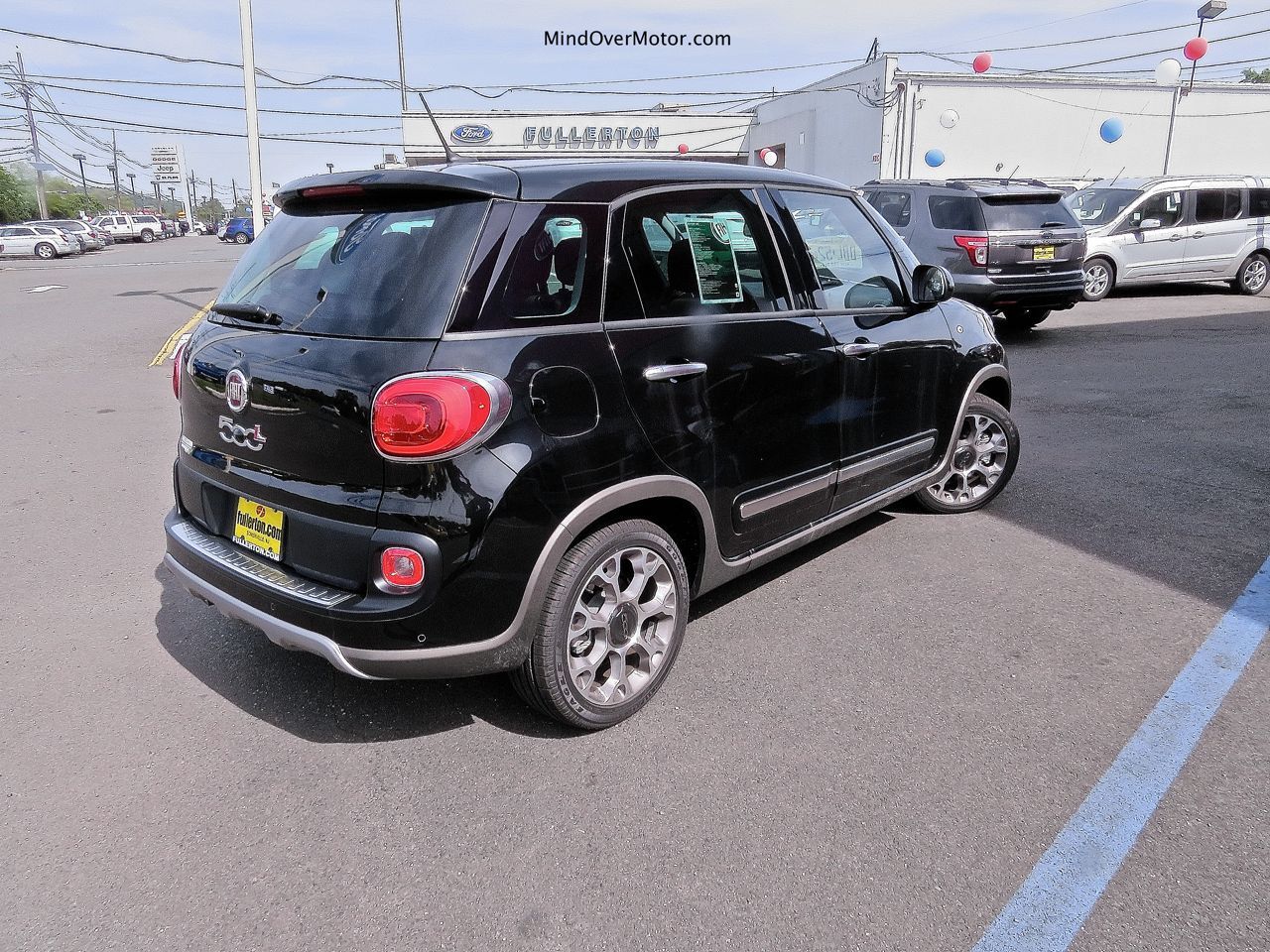 The interior styling is a bit conflicted but it’s still passable.  The steering wheel is squarish and looks awkward, with too much space at the top.  The strange soft-shape look of the dashboard does follow the soft theme of the exterior but unlike the finishing in the base 500 hatchback, the outside-meets-inside philosophy doesn’t quite work as well thanks to the amount of space covered at one time.  I do like the kidney-shaped air vents flanking the dashboard on all sides–it’s a nice flourish that does work with the car’s verve.  There’s a lot to like overall when it comes to the visual cues in the 500L Trekking, but there’s also some things I find myself questioning the logic of. 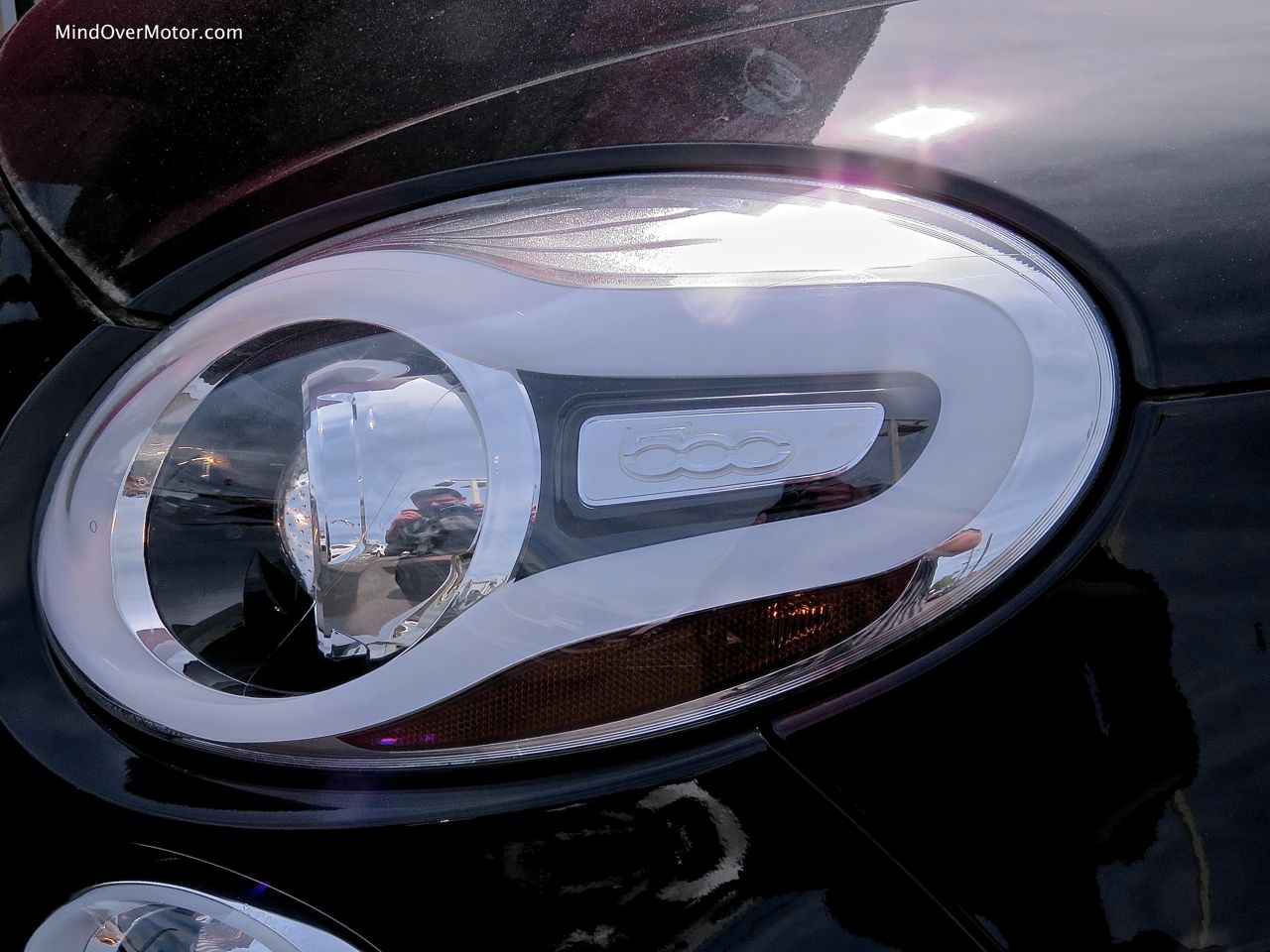 I understand that the 500L is not an expensive car.  The retail on the Trekking model I drove was less than $24K, but I was still looking for good quality no matter what.  The doors all shut with a satisfying noise and there’s a good amount of depth to the paint, but the over-reliance of plastic trim around the windows looks a bit chintzy.  The fact that this was a black car did help its case in that regard.  There’s a lot of black plastic on the Trekking, but this being the midlevel model, I was fine with the body cladding, as the more expensive Lounge does away with that and replaces the plastic with body-color panels.  There’s a lack of chrome and it actually looks more expensive in this case without the bezels around the taillights. 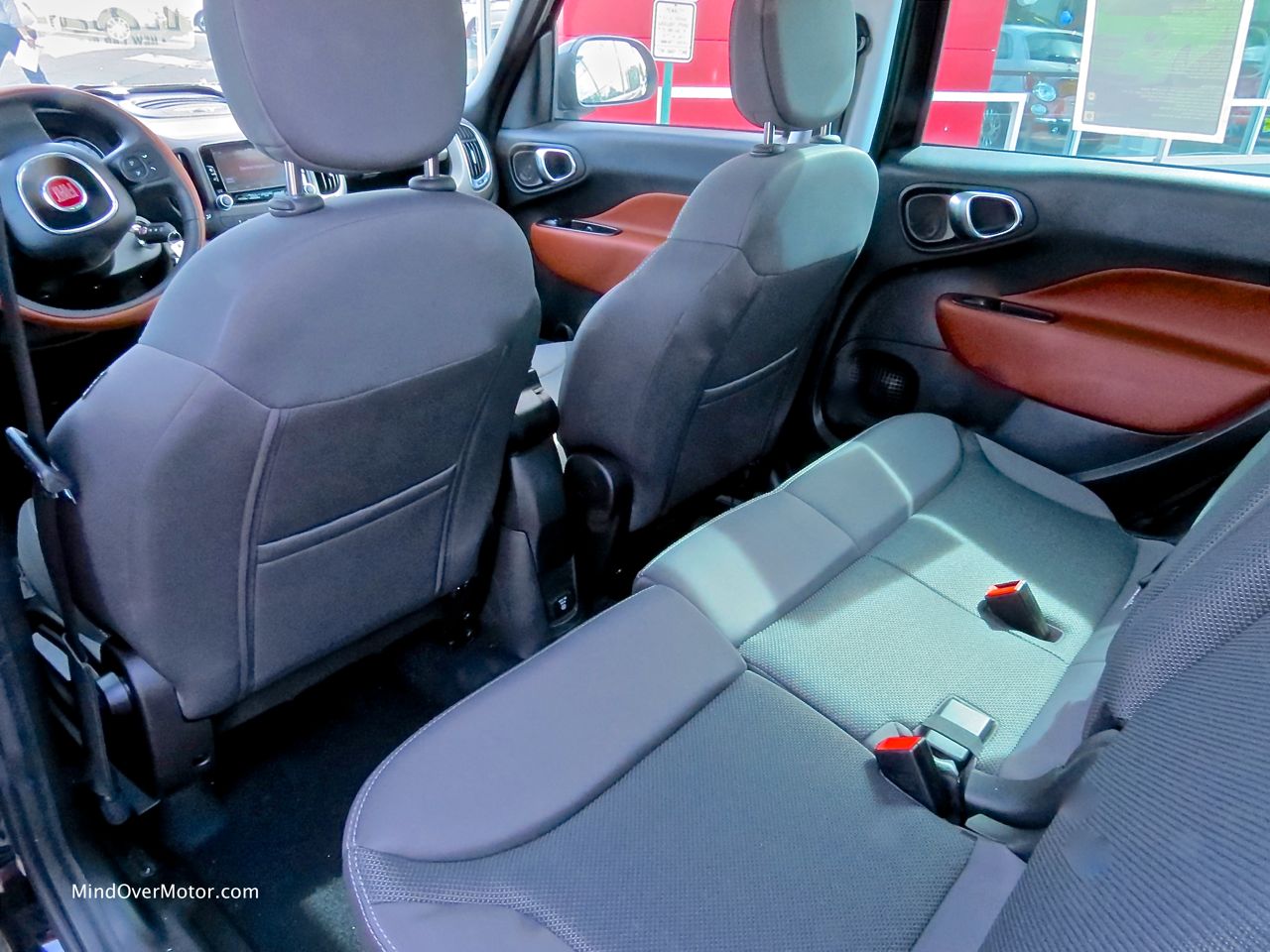 The interior fit and finish is relatively good and as a family vehicle should stand up to a bunch of snot-nosed kids and irritated parents.  There’s a little mirror located up top right in front of the rearview mirror which can be aimed at the rear seat to see if dirty little Jimmy is going to launch a spitball at the driver’s headrest or the touch-screen navigation system.  The ergonomics aren’t too bad but it is difficult to read the automatic climate controls at a glance and the modes seem to be scattered randomly around the controls.  The controls for the GPS navigation system are much more organized.  The seats are comfortable and the cloth feels rather supportive.  If there’s a knock on the interior quality, it’s the exposed metal behind the window frame, which really cheapens the look of the 500L.  The Juke that I tested a few years ago, which is also less than 30 grand, looks much more professionally finished. 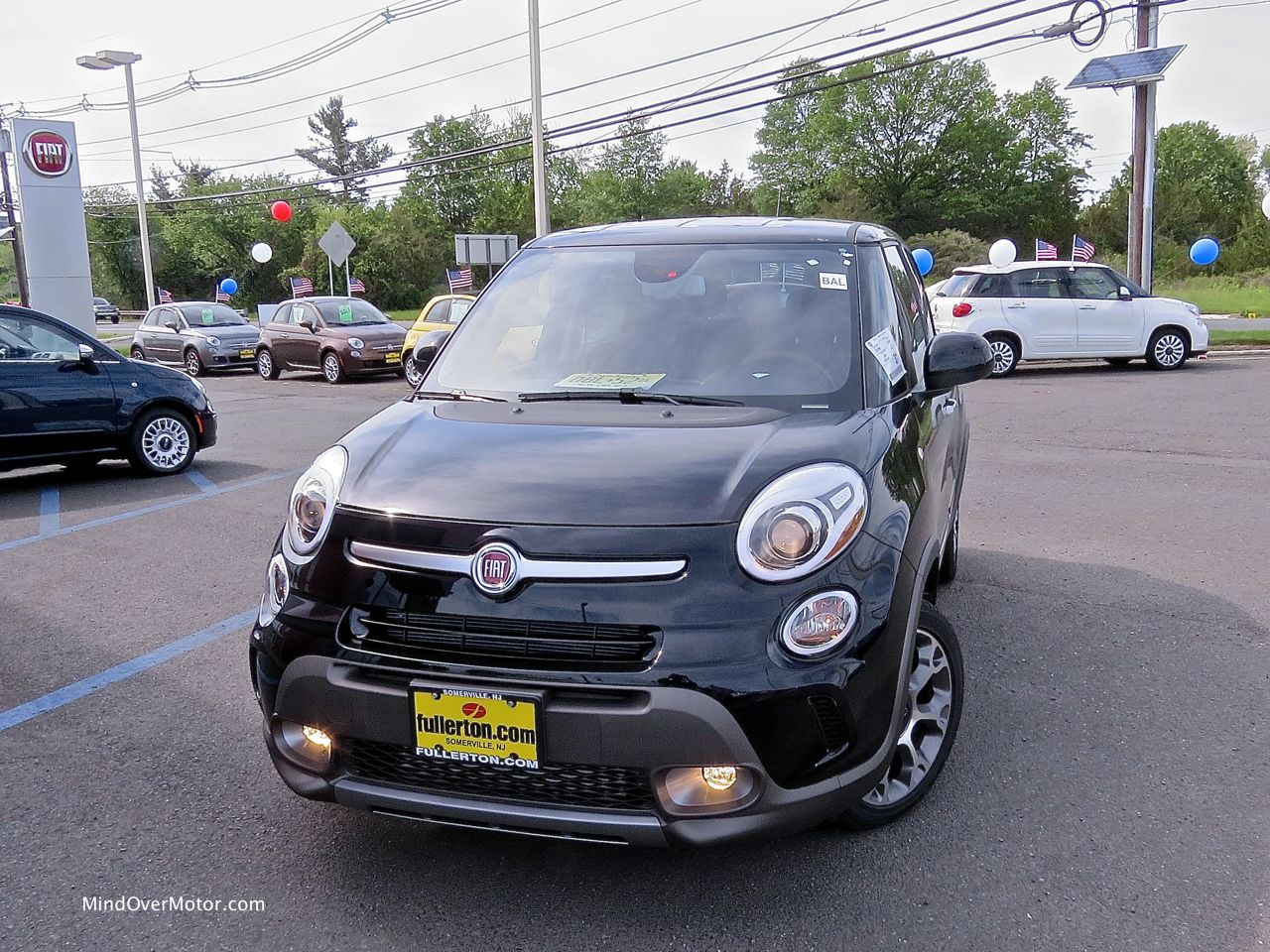 The 500L, being a little Italian runabout, should have some verve and should provide fun even when getting groceries or picking up the little brat from daycare.  However, I’m not sure yet.  It’s got creds–the 1.4L MultiAir turbocharged four is identical to the one in that jalapeño cannoli 500 Abarth, and sounds really nice.  It snarls with attitude and picks up very well from a hard stop or on the highway–a good sign.  The dual-clutch transmission in the Fiat is a bit of a question mark.  While it shifts automatically relatively well, the manual function is a scary proposition–it can get jerky and doesn’t have the smooth action I’m used to in certain German cars with it.  The engine sounds good on acceleration and luckily doesn’t drone, but there’s a strong amount of wind noise and some tire drumming on bad roads.  Visibility on the road is excellent–no blind spots and the over the shoulder issues that plague someone of my height don’t seem to make an appearance.

The handling and braking left a lot to be desired.  While it rides pretty well thanks to soft suspension and relatively tall tires, the brakes are confused.  There’s no nosedive when panic-stopping but the brake pedal travel has a distance that feels like walking from New York City to Philadelphia.  This cannot inspire confidence.  The steering is nice and light, good for an urban crossover, but for spirit driving, it’s not that good.  There’s not enough feel and no communication.  At speed, the controls are still easy to master and the instruments are very easy to read.  This is clearly designed as a family car, but it’s not much for spirited driving.  If you’re looking for a family urban crossover with some verve, a Juke might be a better option. 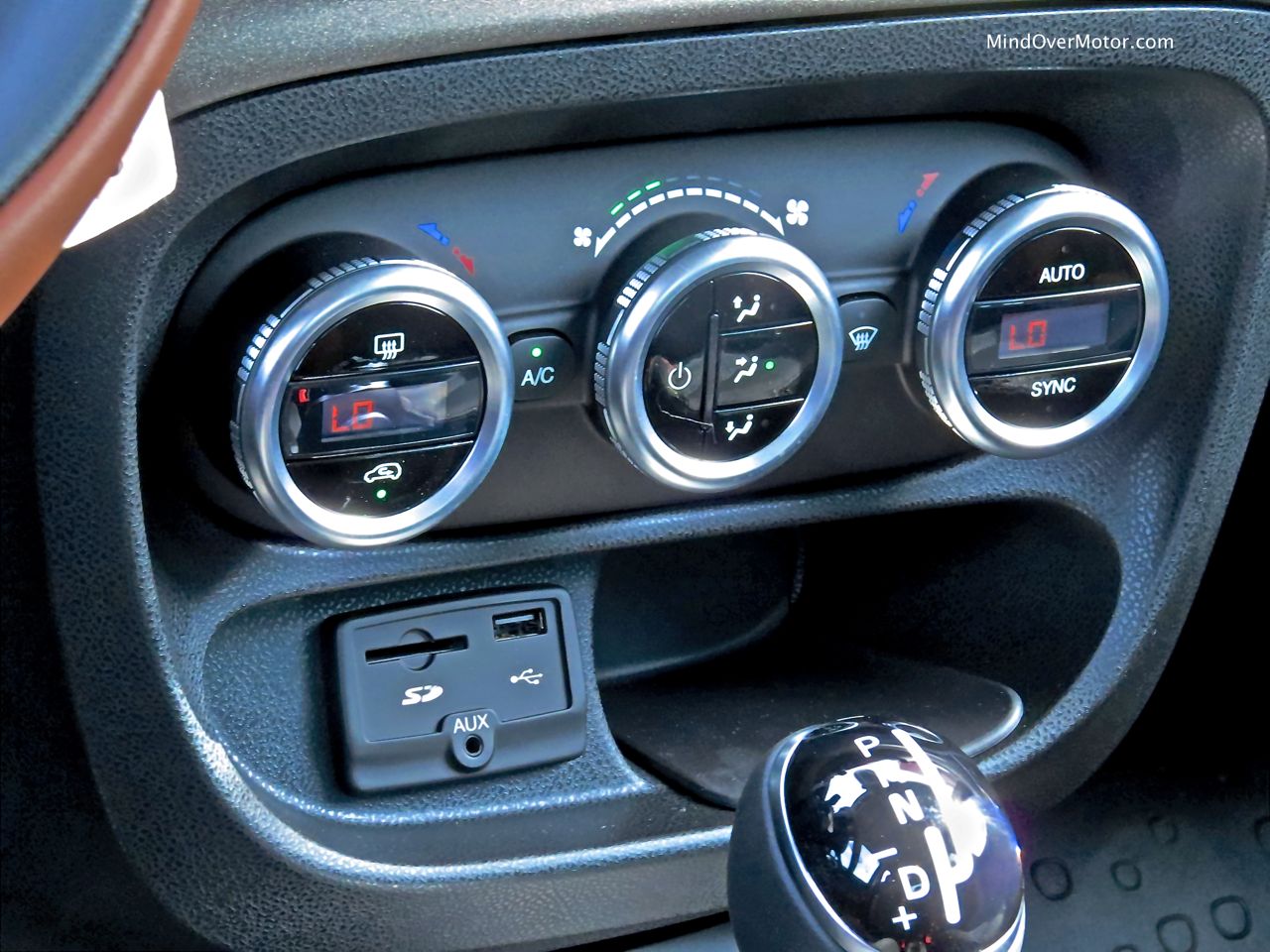 For all the things I don’t like about the 500L, it’s hard to argue the car’s value.  For less than 25 thousand dollars, I am sitting in a car with GPS navigation, a Beats by Dre speaker set, comfortable leather-and-cloth seats, a rear view camera, Chrysler’s uConnect system (which is far easier to figure out than GM or Ford’s chazerai), and a fully automatic climate-control system.  That’s a lot of options for a cheap car that’s based on a city car platform and is designed for the family.  There’s even plenty of cargo space and room for kids in the back.  Three children can fit easily across the back seat (or two regular people), and there’s an optional sunroof to feel the love of the sunlight.  Despite the lack of driving dynamics (and this is no sports crossover despite the Italian heritage), the 500L delivers on the merits that it needs to. 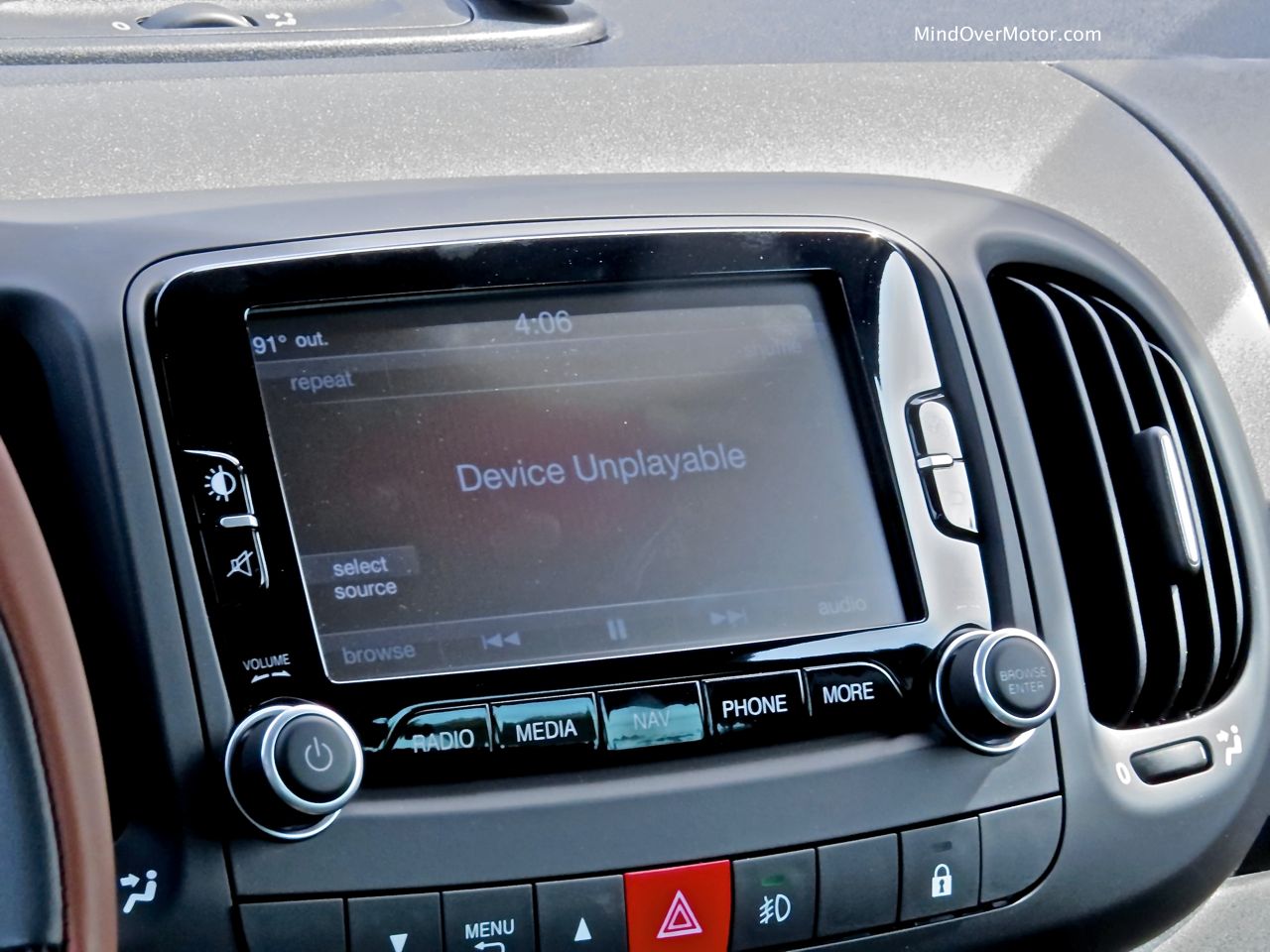 Fiat needs this car to work in America, badly.  No matter how good the 500 is, the 500L must do for them what the 500 can only go so far to do, which is get new buyers in the showroom and appeal not only to young people, but to young people with a family that can stay in the Fiat brand.  This isn’t a bad car for that–and as those families get older, Fiat is adding Alfa showrooms this year for the 4C–which will spearhead the Alfa Romeo brand back into the USA, allowing families to move up to a nice Alfa sedan or wagon, something that hasn’t been available in some time.  So, it’s not a sporty car–but it’s got practicality, value, and a bit of fun all rolled into a cute package. 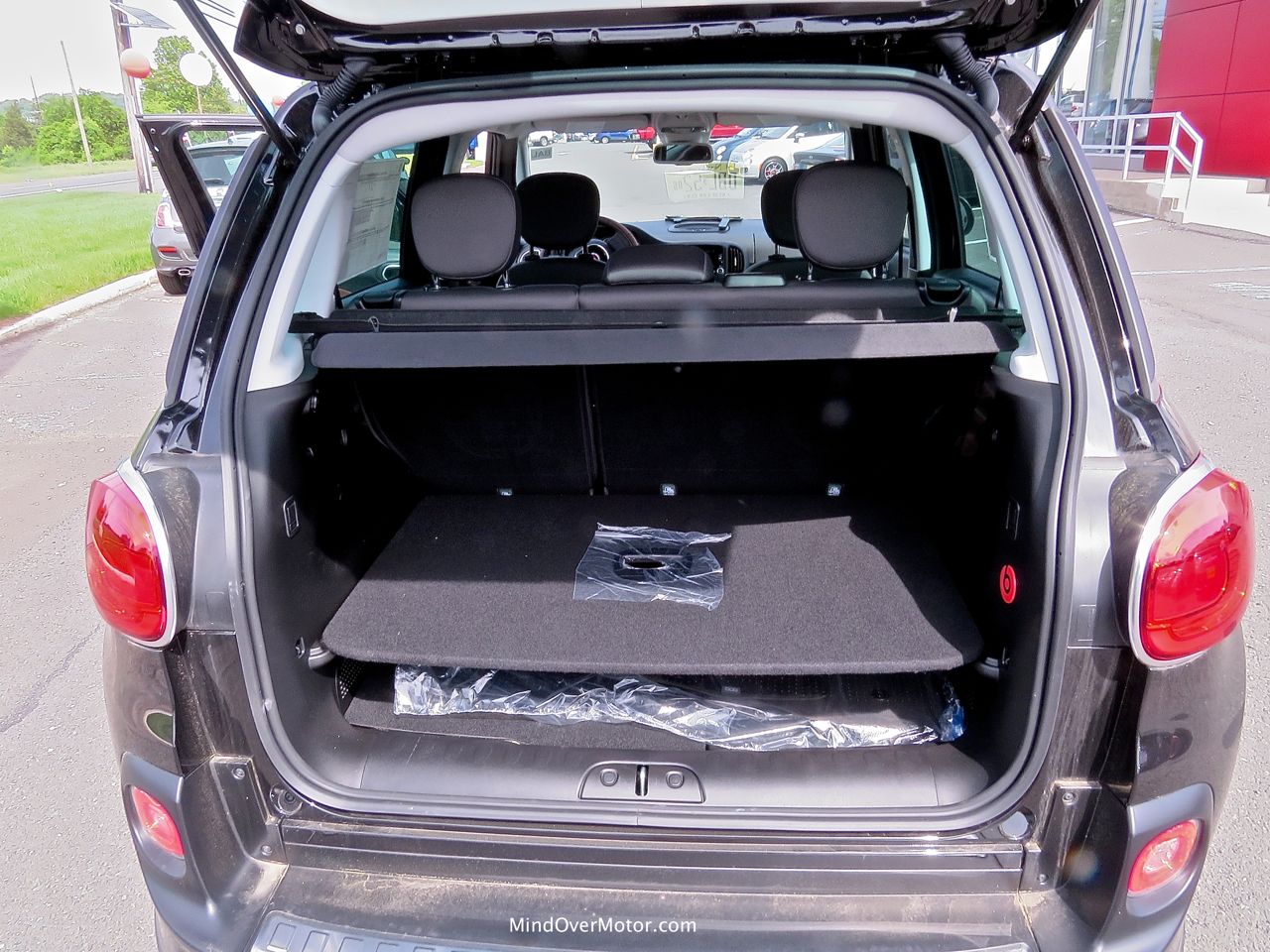 Overall, it’s hard to hate on this car when you stop worrying about how it drives and think about what it’s made for.  This isn’t made for the same types of people as the Abarth, despite having an identical engine.  It’s not going to have the same cute-ness as the regular 500, and it’s not for people who are just looking for a city car because it is too big.  This is a family car for someone who doesn’t have the space to fit a huge vehicle.  It works in the city, thanks to its relatively small size.  It’s light on the wallet, with strong gas mileage and a low price of entry.  Above all, it’s designed to be beaten up a little bit–this is a hard-wearing car on the inside but it smiles on the outside, as if to say “I”ll take the kids in stride, just hose out the interior when the kids do spill the Happy Meal on the seats.”  It’s not utilitarian.  It’s not over-stylish.  It’s a family Fiat, with some style, some good engine notes, and an attractive price.

I’d like to personally thank the staff at Fullerton FIAT in Somerville, NJ for providing the test car and valuable information about the car’s packaging, standard features, and upcoming changes.  These people are great to work with and this car was in their inventory and available at the time of the review.