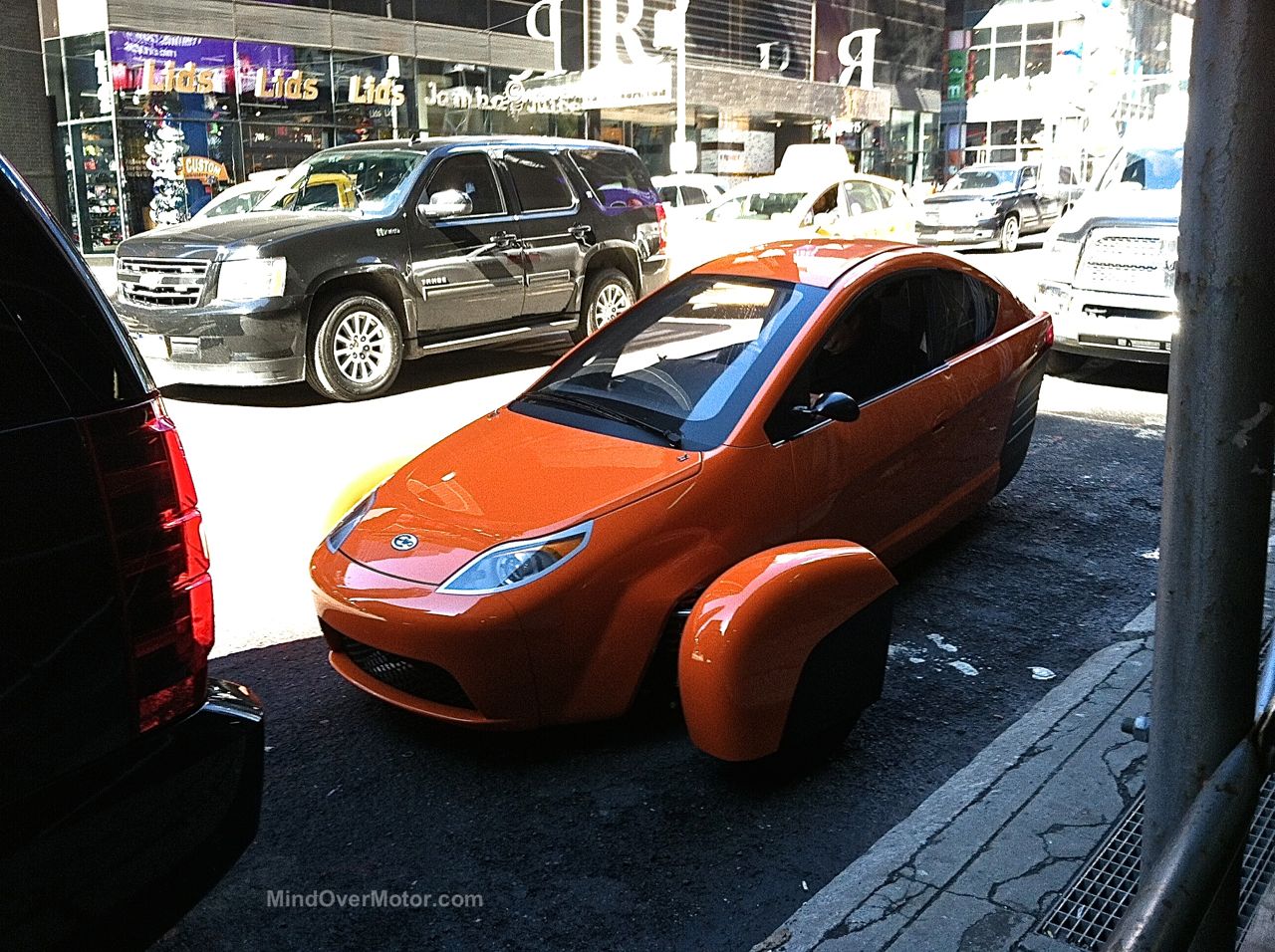 A few weeks ago, my friend, Alex, sent me this photo of a crazy-looking car I had never seen before. He told me it was called an “Elio”, so I searched around on Google to find out more about it.

Made by a brand new company, Elio Motors, this 3-wheeler may well revolutionize the auto industry in the coming years. It may look fast, and far-out, but really it is economical and wonderfully simple. I had a chance to get up close with the Elio prototype at the New York International Auto Show this past weekend, and since then I haven’t been able to stop thinking about the Elio.

The Elio’s Proposition By The Numbers:

So What Should We All Make of the Elio? 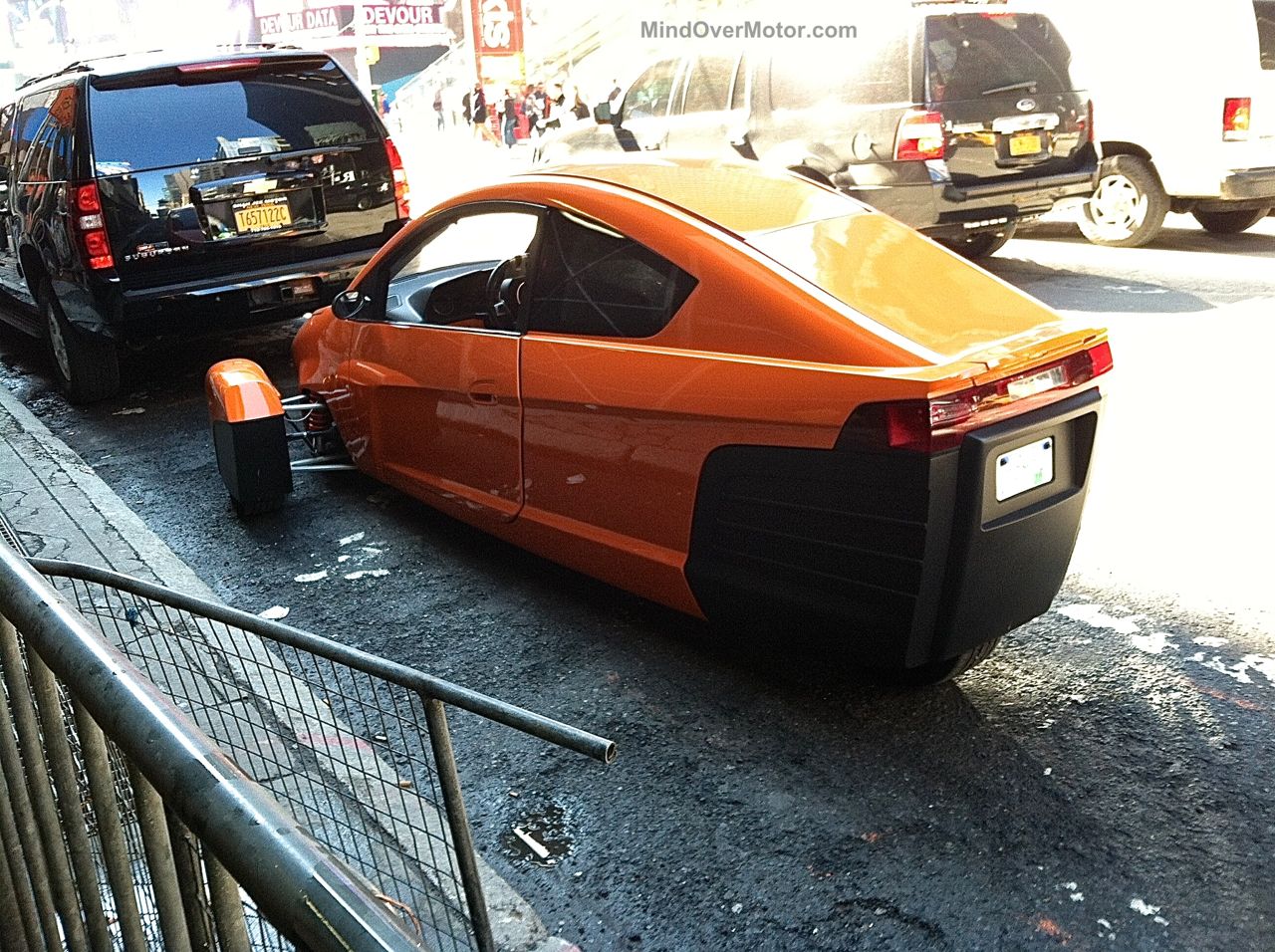 It is a economical car unlike any we’ve yet seen, so cheap that it’s only direct competition comes from questionable used cars.

Now, that exotic appeal may change once Elio Motors is selling 250,000 cars per year, as they hope to, but for now this 3-wheeler draws quite a crowd. People love it because it is cool, and most importantly, they can actually have one!

Not only can people have an Elio, but they probably all should, at least by the numbers. Other than a bicycle, transportation doesn’t get more affordable than this. Let’s compare the Elio to the smallest, cheapest Toyota Prius, the Prius C.

-The Elio gets 49 MPG city, and 84 MPG highway
-8 gallon fuel tank offers up to 672 miles of range.
The Elio obliterates the Toyota Prius in fuel economy

I think those numbers speak for themselves.

Happily the Elio comes with the option of a 5 speed manual transmission, in addition to its 5 speed automatic. Being just 1,200lbs, it will surely be lively and nimble to drive. Paul Elio is also a self-proclaimed car enthusiast, so I’m confident that his car will be entertaining to drive.

In terms of speed, it’s obviously no Ferrari, but there are slower vehicles on the road. 0-60 happens in the 9 second range, and the top speed is around 107mph. Basically it is about as fast as a first-gen Mazda Miata, just front wheel drive instead of rear wheel drive. But anything sporty is a total bonus in a car like this, so just be happy if it’s even remotely fun.

How can a car that small be safe?

If you get broadsided by a truck going 50mph, you’re screwed… in an Elio, in a Prius, in an Accord, in a BMW, and pretty much anything that isn’t a tank. If that scares you, then you probably shouldn’t leave the safety of your own basement, because the world is a terrifying and dangerous place.

For those with reasonable expectations of safety, the Elio is about as safe as a car its size can possibly be. Its design features larger crumble-zones than many other small cars, and it even has a roll-cage built into its frame.

What about the practicality?

Anyone who has ever lived with a Mazda Miata knows how most people can make this car work in their daily lives. Like a Miata, the Elio has two seats and a small trunk. The difference is that the two seats are one in front of the other, like a fighter jet.

I tried out the back seat for myself in New York. I’m 5’11 and of a stocky build, and I fit just fine with a friend sitting in the driver seat. Compared to my friend’s Ford Fiesta, there was around the same head room, and probably more leg room.

Many people can probably make an Elio work as their only car. But Elio Motors is also marketing it largely as an “And Car”… as in you have big practical car AND an Elio to drive when you don’t need that much space. Used in such a way, fuel savings would be significant, especially if your other vehicle is a truck or an SUV… or more my style, a manual Cadillac CTS-V Wagon with the Hennessey 700 package.

Who should buy an Elio?

Almost anyone should be able to make the financial case for buying an Elio, even if they have other cars. It’s a great, low-cost option for people on an actual $7,000 budget, but it’s also a great option for people who can write a check for $7 grand without thinking.

I’m interested in getting one as a daily commuter, so I can waste more money on the fast cars I really want. My parents, on the other hand, want one for the beach, so they can spend more money being retired and rowdy. The Elio works for many applications.

If it’s not already obvious, I think Elio Motors has a great thing going here, but there is a lot they must consider if they will be able to deliver when the car goes on sale in 2016.

Over 41,000 people have already placed an order for an Elio, well within their current factory’s 250,000 unit-per-year capacity. But if the car winds up being as good as I hope it is, the biggest challenge for Elio will be filling the ensuing flood of orders in an acceptable amount of time. Second car people can wait around, but $7,000 budget customers generally need their cars right away.

Making a great promise is one thing, but delivering on it is EVERYTHING. If Elio Motors delivers, then we could be looking at the next Model T or Volkswagen Beetle.

Elio Motors is going to have to prove the safety of the car to the masses. I get what they’ve done in theory, but I won’t be totally convinced until a few people smash one and walk away fine. Elio Motors can’t really do that, but they can show various crash tests publicly in order to reassure potential buyers.

Build quality will be a big question mark for the Elio, up front. Elio built their own 0.9L 3-cylinder engine for the car, and most of us know automakers rarely, if ever, get things right the first time. Having said that, the general mechanics of the Elio are quite simple, so if it’s built well, then there’s no reason it shouldn’t be reliable. Time will tell all, and there will surely be some issues, but it’s how Elio Motors deals with those issues that will really matter.

If executed well, the Elio could change the whole industry

The Elio may cost less than half the money of a Chevy Spark, Nissan Versa Note, or a Honda Fit, but that doesn’t mean it won’t be robbing them of sales. Where those vanilla hatchbacks are boring and dull, an Elio will drop your jaw and make you go “Daaaaamn!” It’s also A LOT less costly than any of them, twice as fuel efficient, and probably more fun.

If it does succeed, please believe that the Elio is only the beginning of a lot more to come from Elio Motors, but there is a lot of ground for them to cover between now and then.

If the car is everything Elio Motors is promising, then the question people will be asking isn’t “Why should I buy one”, but more “Why shouldn’t I buy one.” It makes so much damn sense in theory, but Elio Motors will have to deliver a solid product to make it a reality.

I look forward to getting behind the wheel of an Elio as soon as cars are available to write a full, hands on review.

I am definitely a believer at this point, and a likely customer if they deliver.

30 thoughts on “What To Make of Elio Motors?”