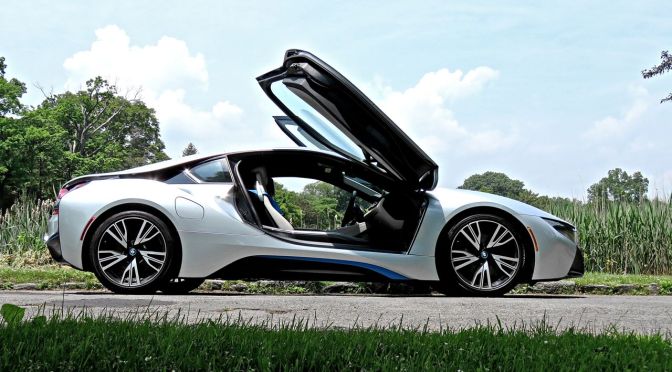 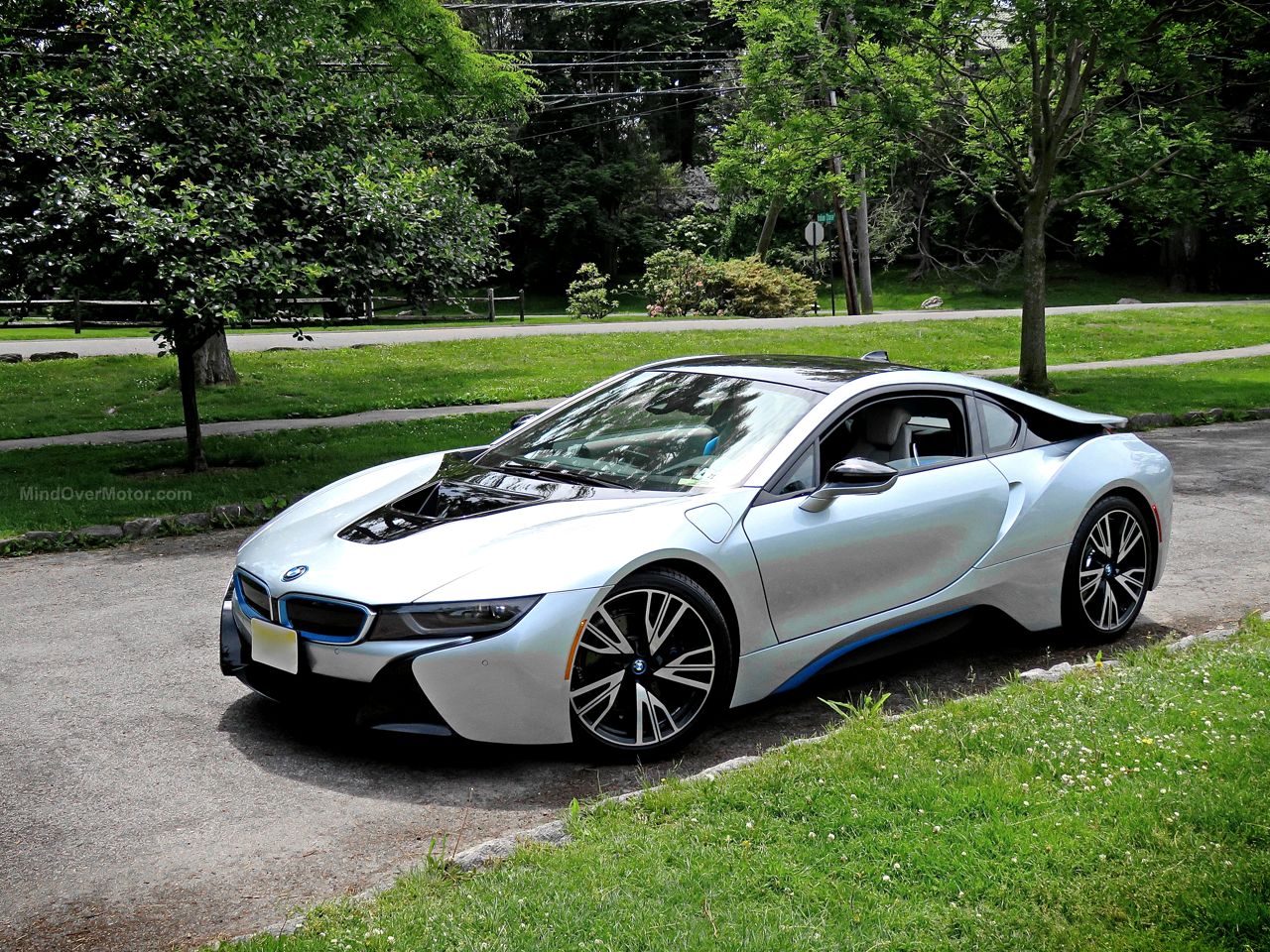 I’ve been itching to get my hands on a BMW i8 ever since I first saw it, and the chance finally came. As a car blogger working to grow my following, it’s still a very special occasion when someone is willing to throw me the keys to a six-figure set of wheels. As you might expect, it’s awesome to get to live the dream, even if it’s only for a little bit.

The BMW i8 is a total show-stopper. More of a UFO than a car, people go crazy when they see it out on the street. Most of them won’t even know what it is, but they will know that it’s something very, very special. 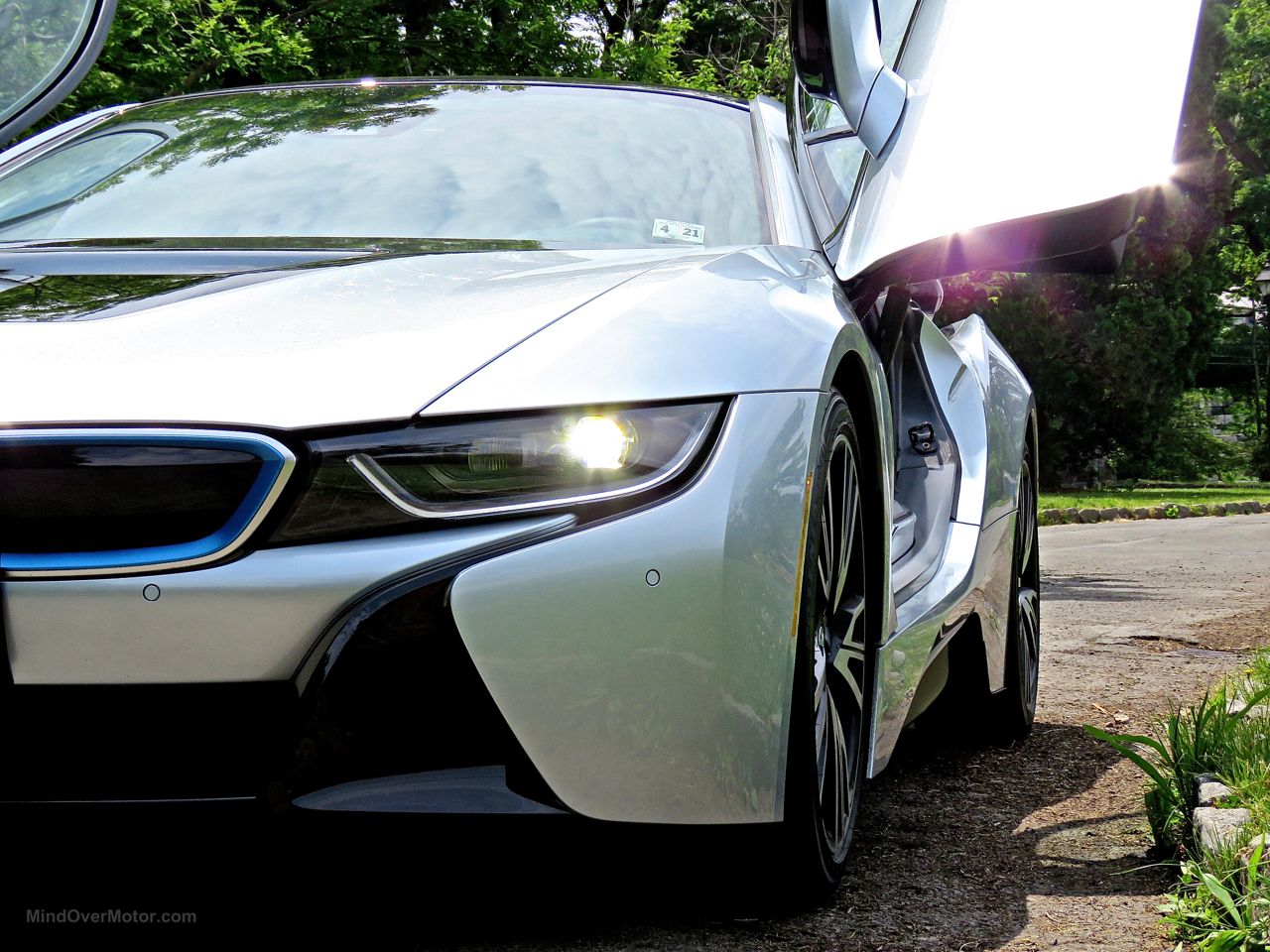 I remember, back at Monterey Car Week a few years ago, a white BMW i8 was parked with a candy green McLaren P1 at a restaurant. Despite being the more incredible car, with ten-fold the price tag, the McLaren was basically invisible. Everyone was drawn to the BMW, with its futuristic look. I even had to pull up BMW’s website on my phone to convince this one guy that it was, in fact, a production car.

Even after driving the i8, my favorite thing about it is still that it’s basically a road-going concept car. Just look at the i8 Concept next to the production version; there isn’t much difference at all. I cannot express how much I love the fact that BMW deliberately chose not to water-down the car’s design for production, and, praise their Bavarian-cream-filled souls, they even left those fantastic gullwing doors!

In terms of exotic, jaw-dropping curb appeal, the BMW i8 is right up there with the craziest cars on Earth. Off looks alone, a Koenigsegg, Pagani, or a Lamborghini won’t turn any more heads than this Bimmer will. Every stop light I was at, whoever was standing nearby had to tell me how much they loved “my” car. People had their camera phones out driving alongside me, trying to get a photo. Every kid I saw in another car was pressed up against the window, trying to get a better look. The i8 is has an immense effect on the world around it, definitely a car that will make someone’s day every time you take it out for a spin. 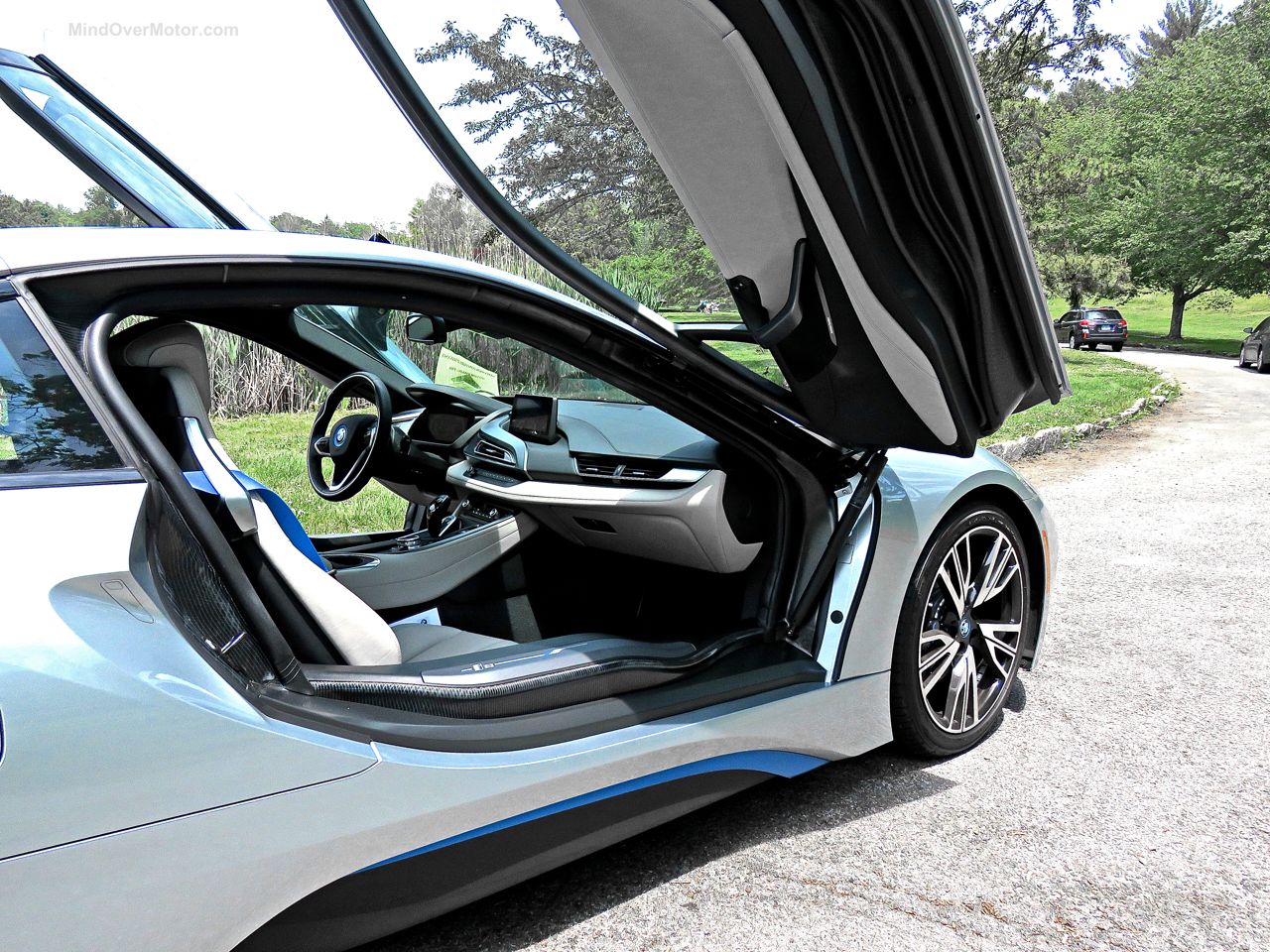 What I found most surprising about the i8 was, with all of its insanity on the outside, just how easy it was to forget about inside the cabin. The interior itself is mostly standard BMW fare, and it’s very comfortable, quiet, and pleasant to drive in during normal traffic. Other than the low seating position, and operating those crazy gullwing doors, there isn’t much to remind you that you’re driving something so cataclysmically exotic. 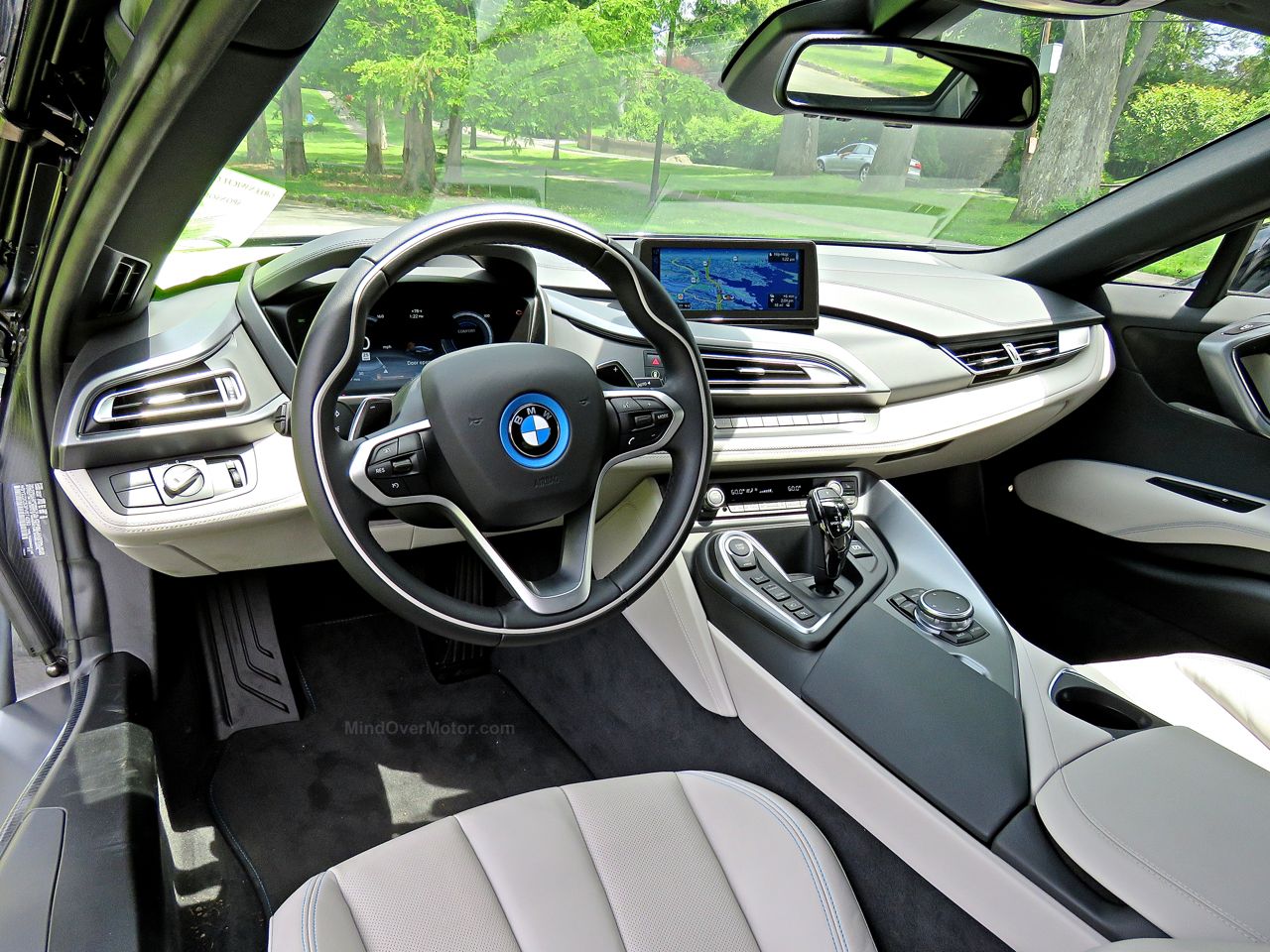 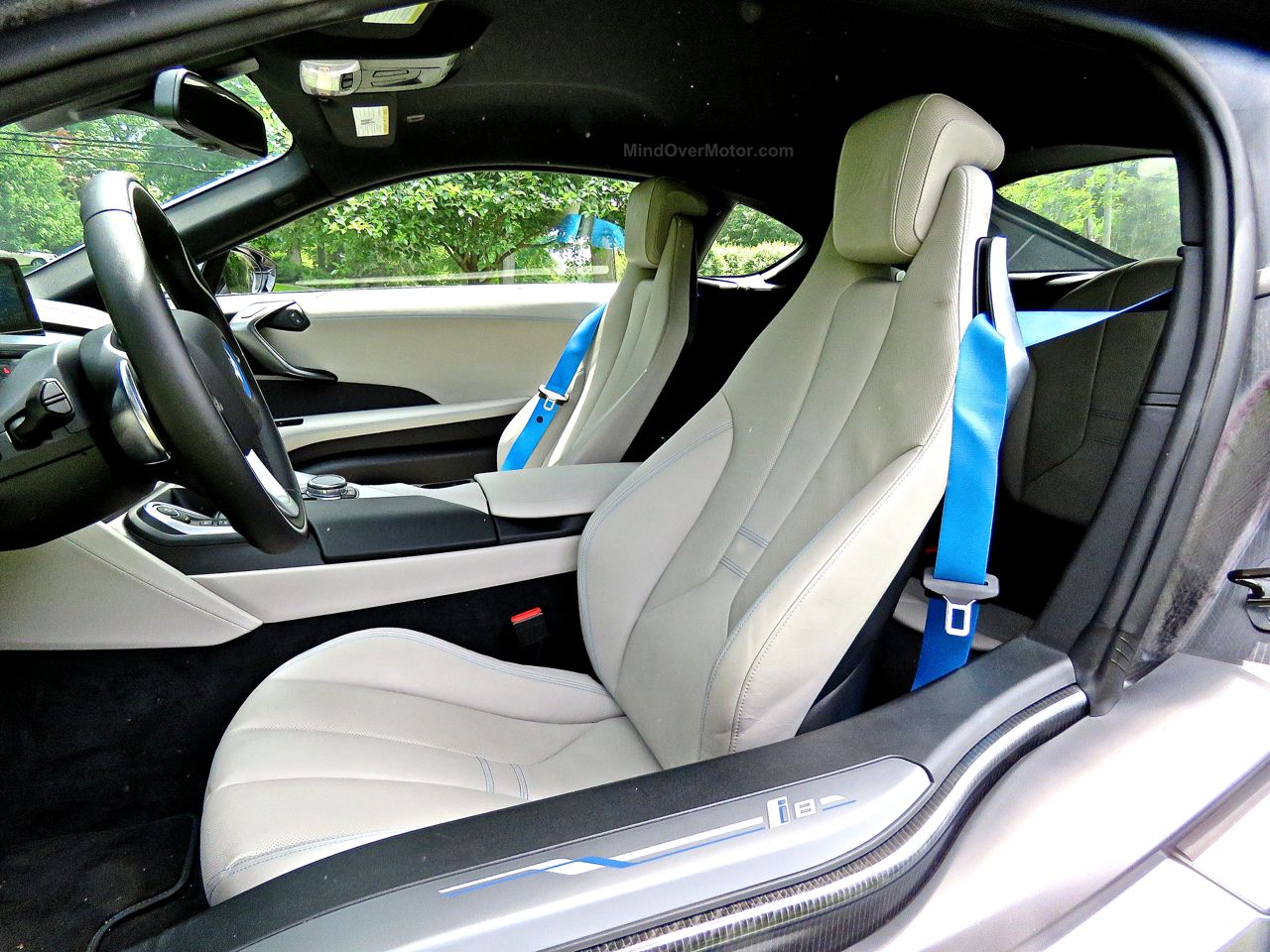 Just driving along, and I’d see someone flip out on the sidewalk, and my first thought would be, “What on Earth is wrong with that person?… Oh right, I forgot, I’m driving the Millennium Falcon.”

It’s crazy having such a normal-feeling interior in a car like this. I mean, it even has a somewhat usable back seat. I made it a point to try and get my big ass back there, and once I was in, it really wasn’t all that bad. I definitely wouldn’t want to be there for long, but a 15 minute ride to dinner would be fine. 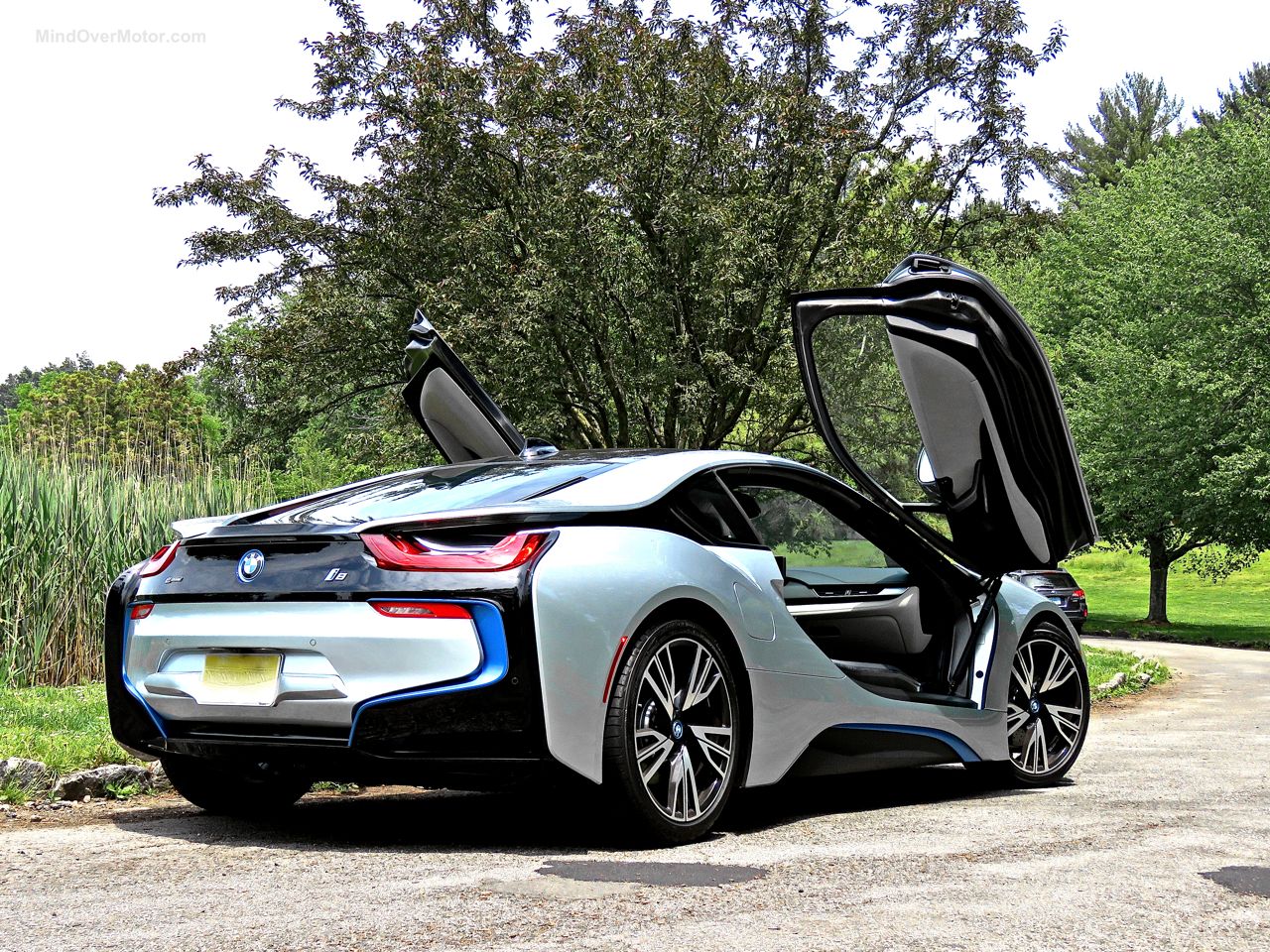 The intention behind the drive

I think it’s worth noting that we’re pretty far into this article now, and I haven’t even discussed how the car drives yet. That’s because the BMW i8 is probably a car that you’ll wear before it is a car that you’ll drive. It’s a different approach to an exotic car, but one that may be more realistic for most actual buyers.

Many people will buy a Ferrari or Lamborghini just so they can be seen in it and leave it sitting in front of some nightclub as a testament to their status. All that racing technology and hard development miles on the track mean nothing for their purposes, and I think it’s very important to understand this when looking at the i8.

Now, I didn’t explain all that to come and tell you the BMW i8 drives badly. It is, in fact, a great and unique driving experience, but you can have much faster cars, and much better “driver’s cars” for the money. 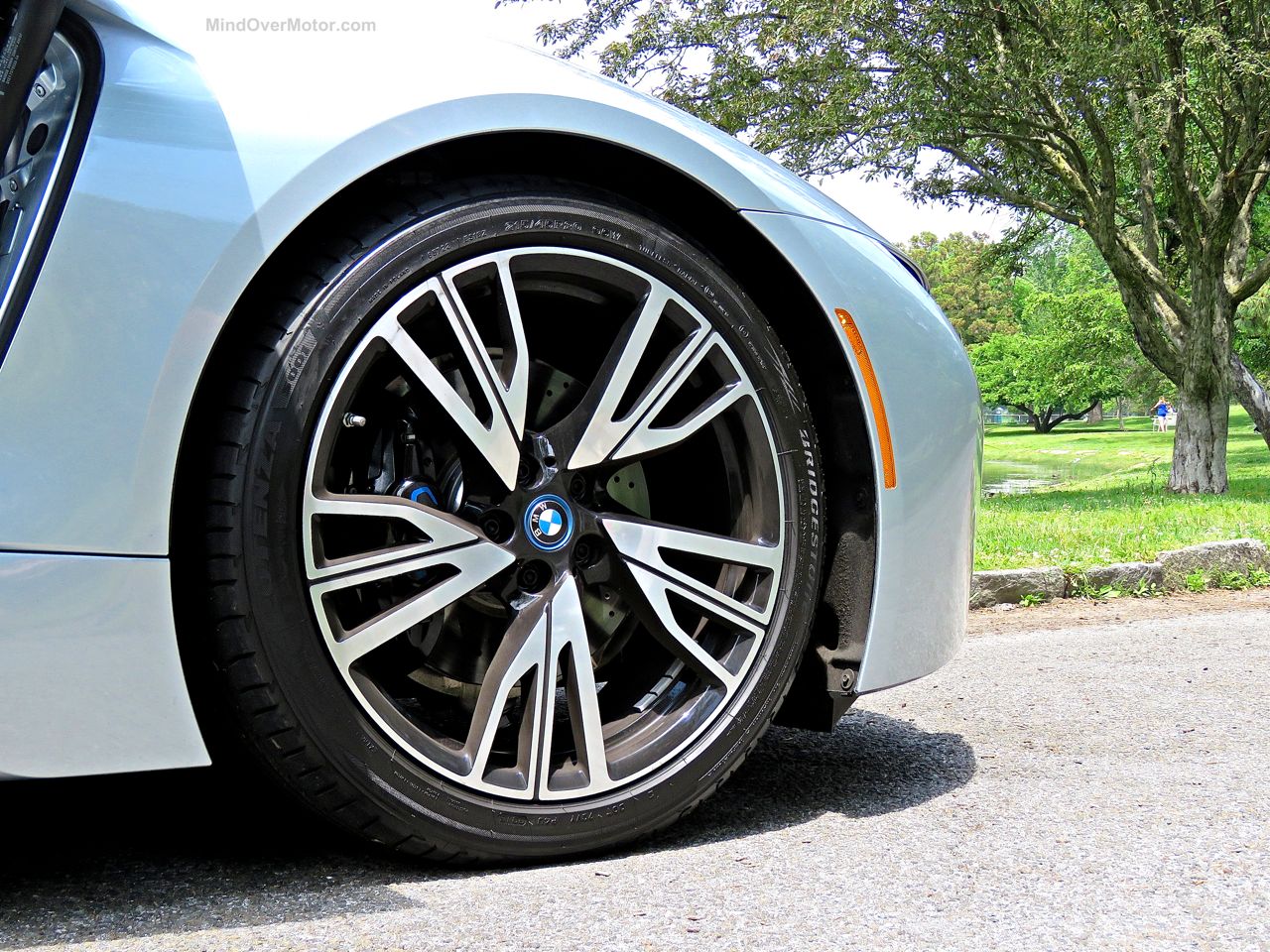 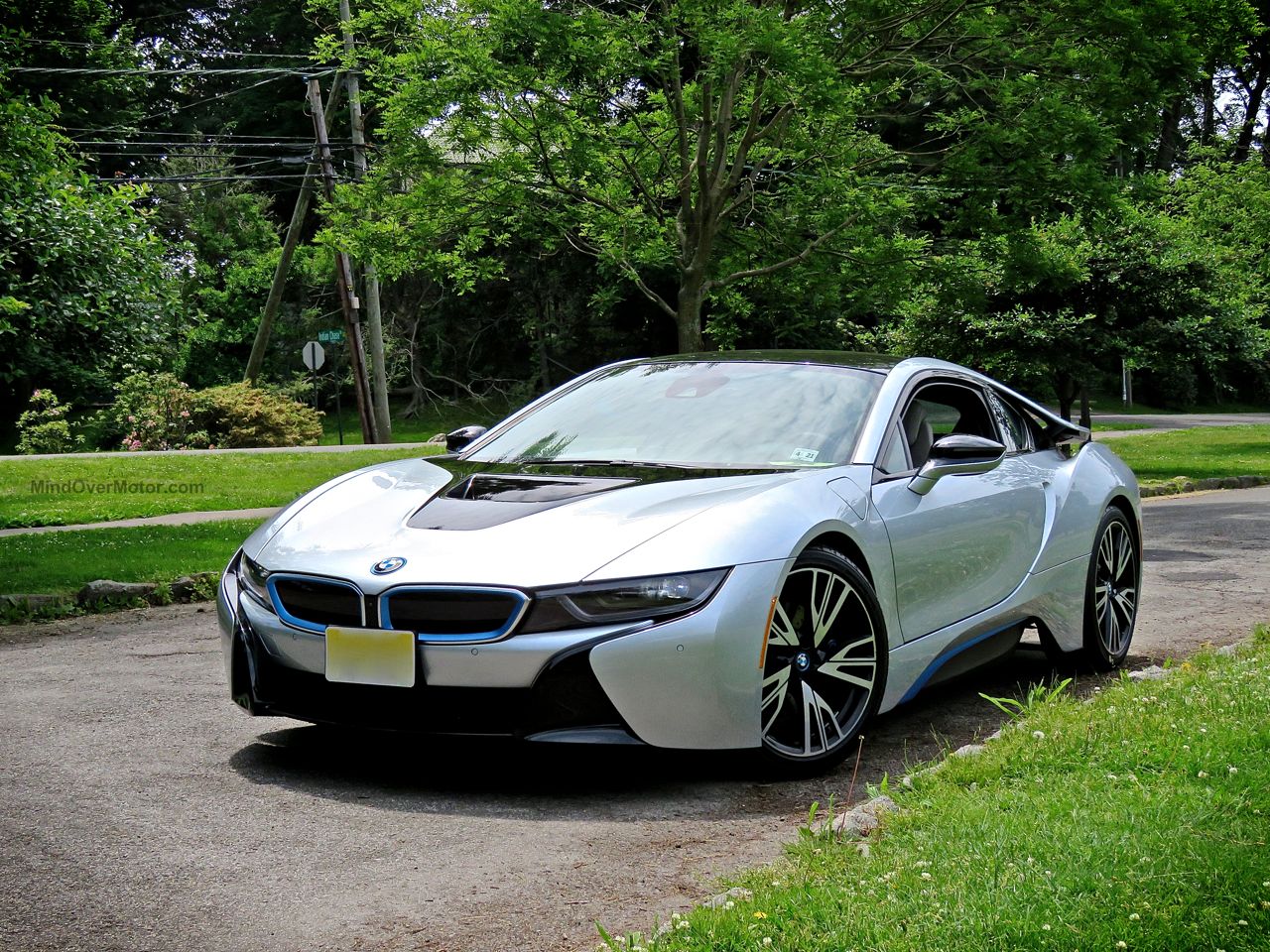 The dynamic performance of the i8 is somewhere around that of a Porsche 911 Carrera. It’s quite fast on the road, and has no problem getting into “arrest me” territory.

What’s really unique about the i8 is its powertrain, and how it makes the car feel to the driver. Looking at the i8, you might expect some exotic V12, but it’s actually a hybrid with an electric motor at the front, and  a 1.5L turbocharged three cylinder (borrowed from a Mini at the rear. Power from the gas engine gets to the wheels via BMW’s crisp 6 speed automatic transmission, and the electric motor gets its own 2 speed automatic transmission. The turbo gas engine makes 228hp, and the electric motor adds another 129hp for a healthy system total of 357hp. Bottom line, the BMW i8 is a turbocharged hybrid with all wheel drive, a lovely culmination of today’s cutting-edge automotive technology. 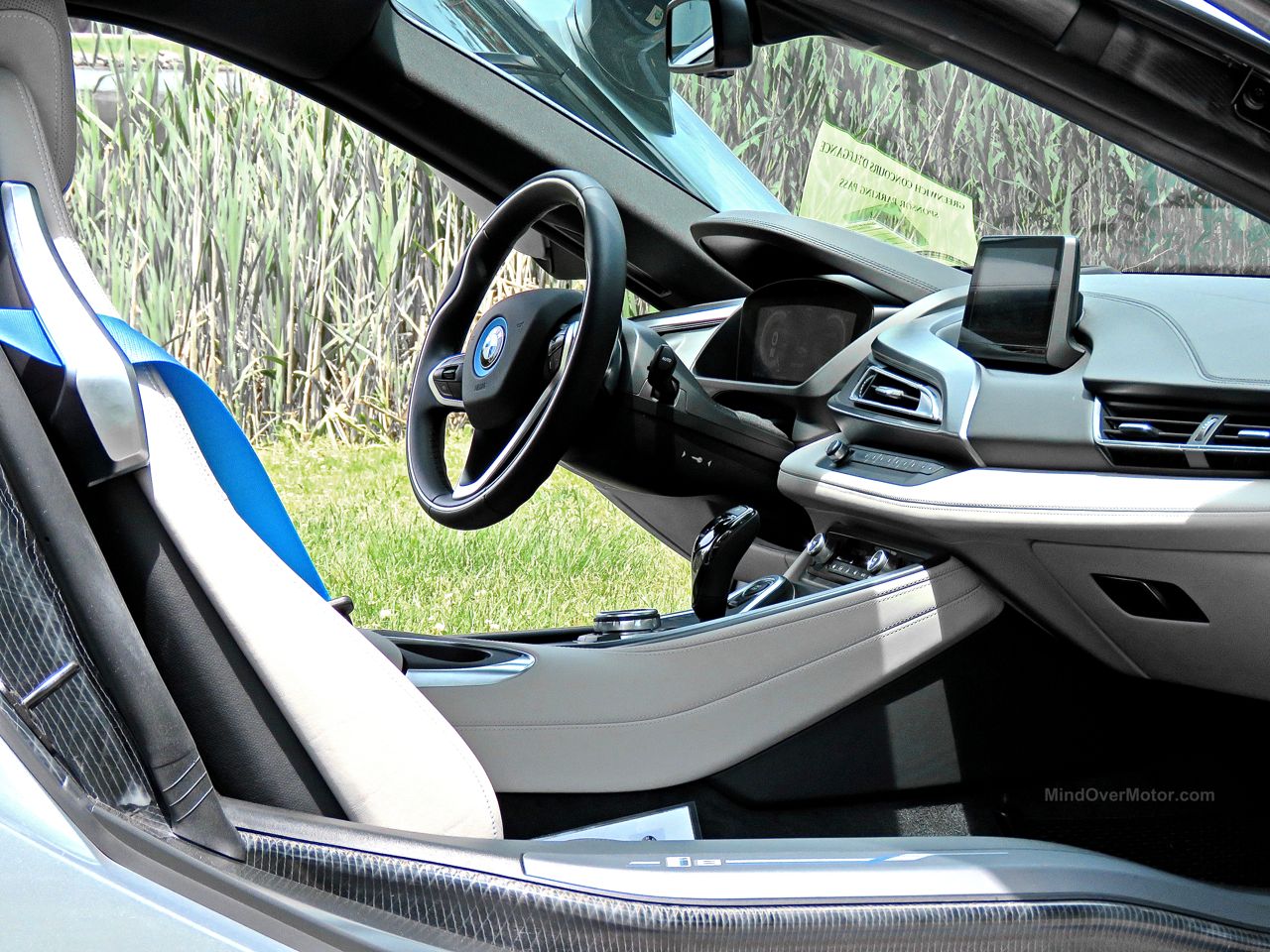 What does all of that mean from behind the wheel?

“Responsiveness” is the word to use here. Basically the instant torque from the electric motor fills in any turbo lag you might experience, and the i8 delivers smooth, yet substantial acceleration. To your right foot, it feels as responsive as a good naturally aspirated engine, maybe even sharper. Power piles on progressively, and the speed increases at a thrilling rate. 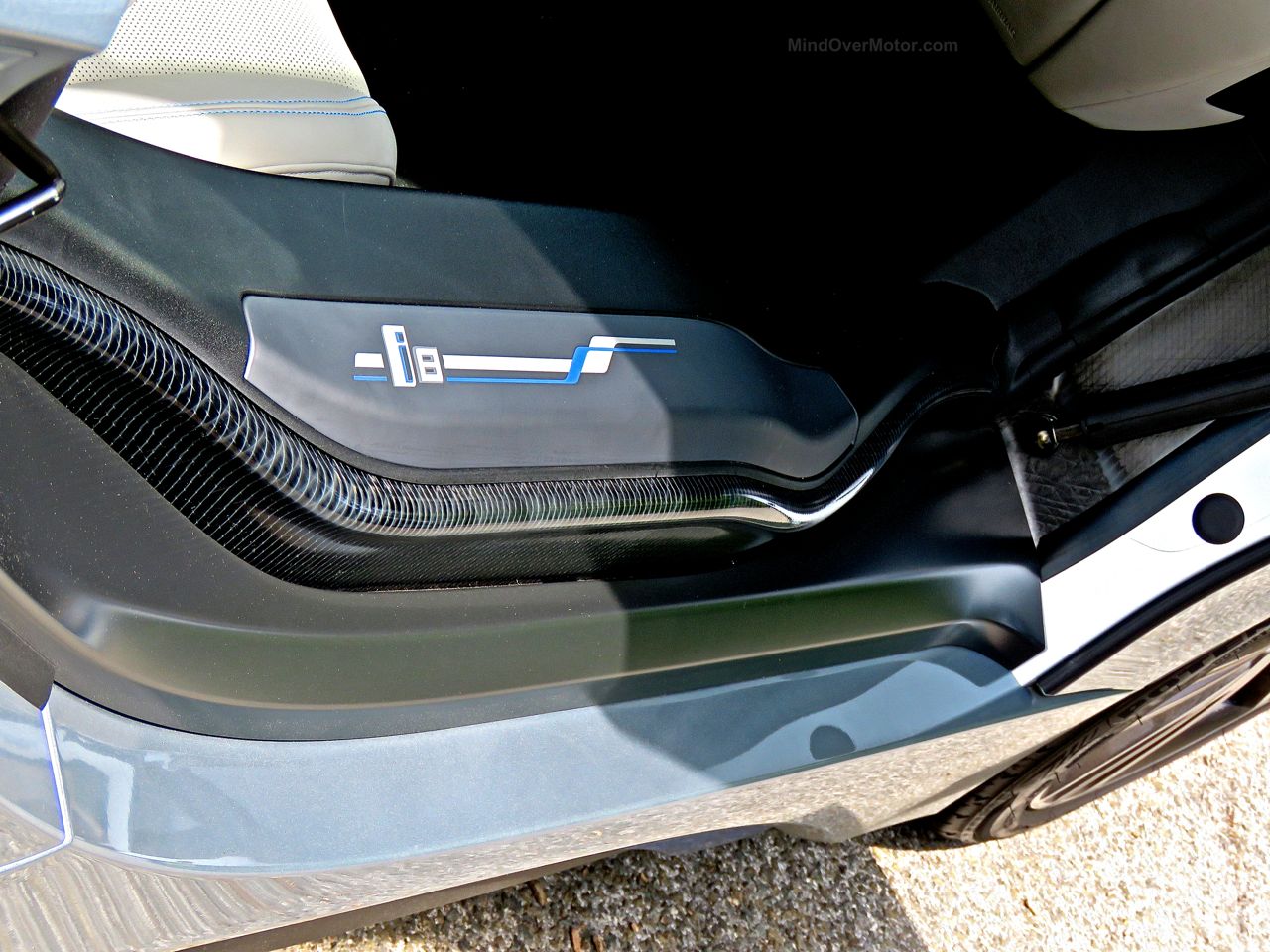 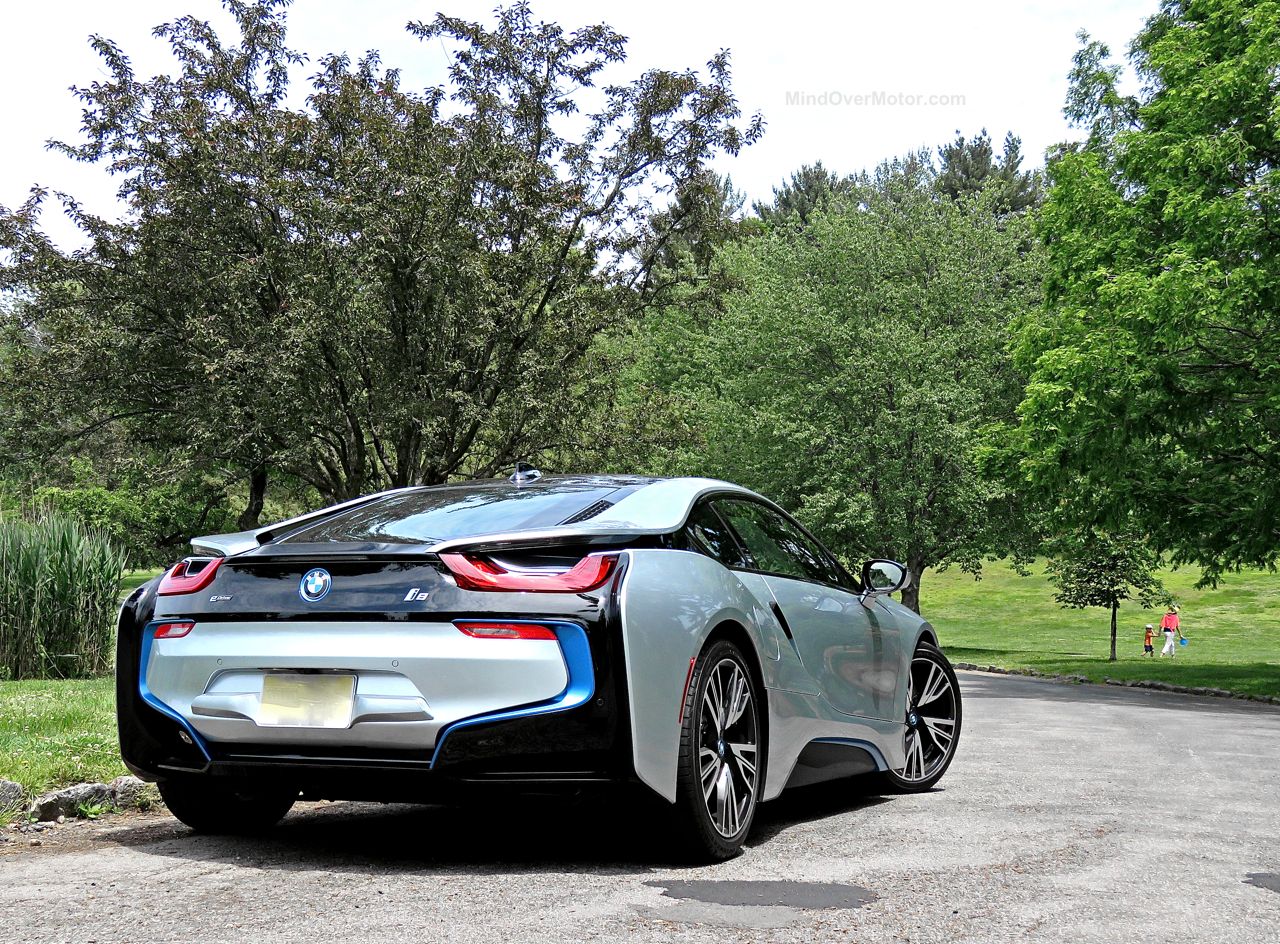 BMW has covered most of the little three-banger’s natural noise with more exotic engine sounds from the speakers. I found it actually worked well for the experience, even though I disliked it, in general, for being fakery.

When you’re driving full-electric, the i8 is totally quiet. What’s nice about its powertrain design is that the i8 can run electric-only up to around 70mph. On a fully charged battery, its electric driving range is around 15 miles, but that’s not how you’re supposed to use it. The i8 is a very fast car when you want it to be, but it’s also legitimately economical… if that even matters to anyone spending $150,000 on a car.

In terms of handling, the i8 feels like a sharp mid engined sports car. It likes fast, smooth driving through turns. It’s steering is quick and immediate to respond, and the chassis is tight and well-composed as you load up the suspension in a corner. Using the paddle shifters, gear changes are satisfyingly crisp. The i8 is a distinctly modern driving experience. It’s not ideal for old-school driving purists, but the i8 is fabulously entertaining on every level.

Check out this video from my drive (Warning, some NSFW language):

Looping back to purpose

BMW made the i8 as a futuristic chariot for the more casual driver. It’s something anyone can get excited about, and enjoy.

The i8 is not about finding the nuances of handling as the tires scream for mercy at the limit of grip. It’s not about having a tangible connection with the car and feeling like you’re a part of some organic machine. BMW wasn’t trying to accomplish any of those things with the i8. If all that purist stuff is you thing, go buy a manual Porsche 911 and have a ball with it. You can even have yourself a coveted 997 GT3 RS for the same money as an i8. 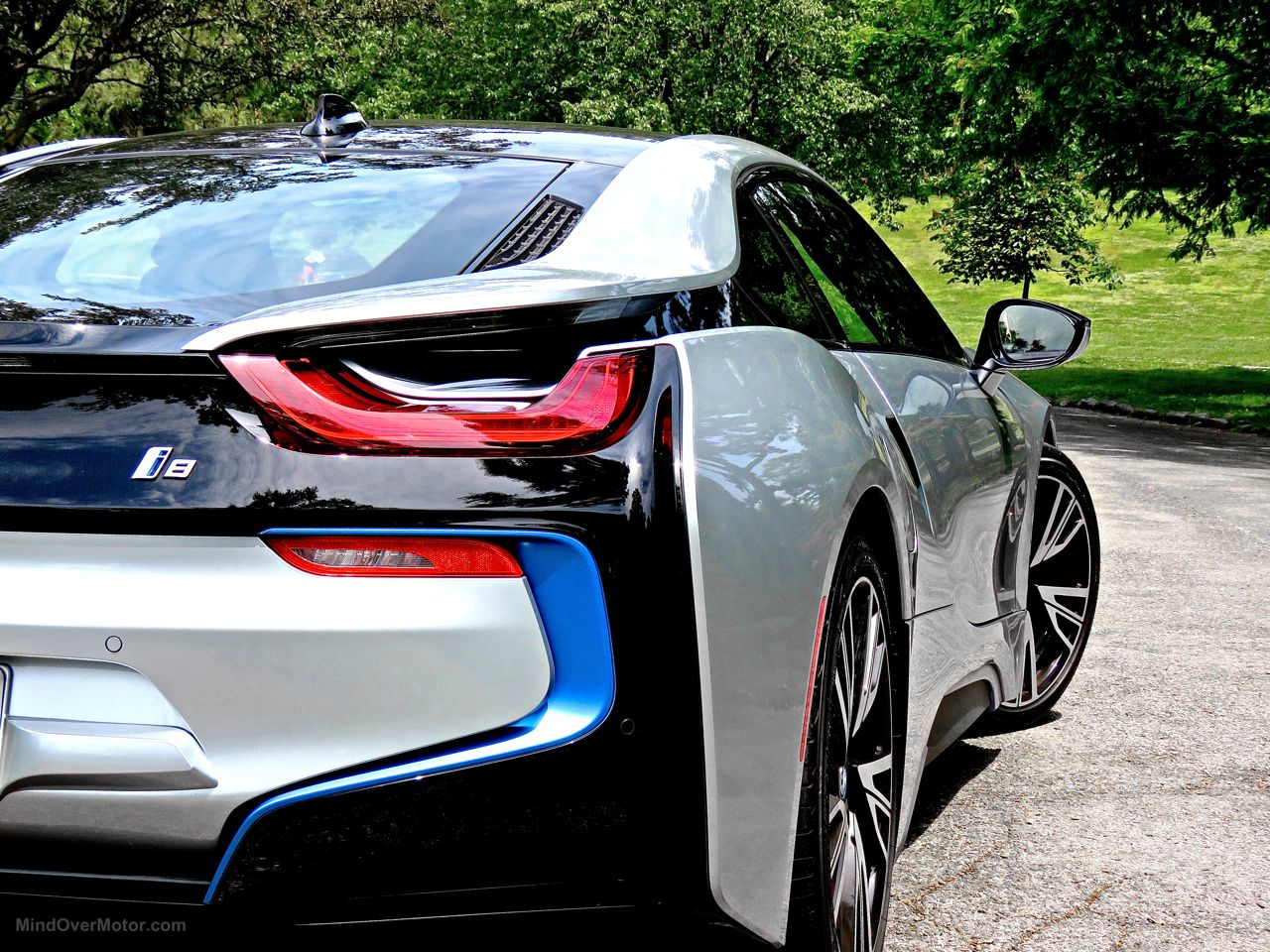 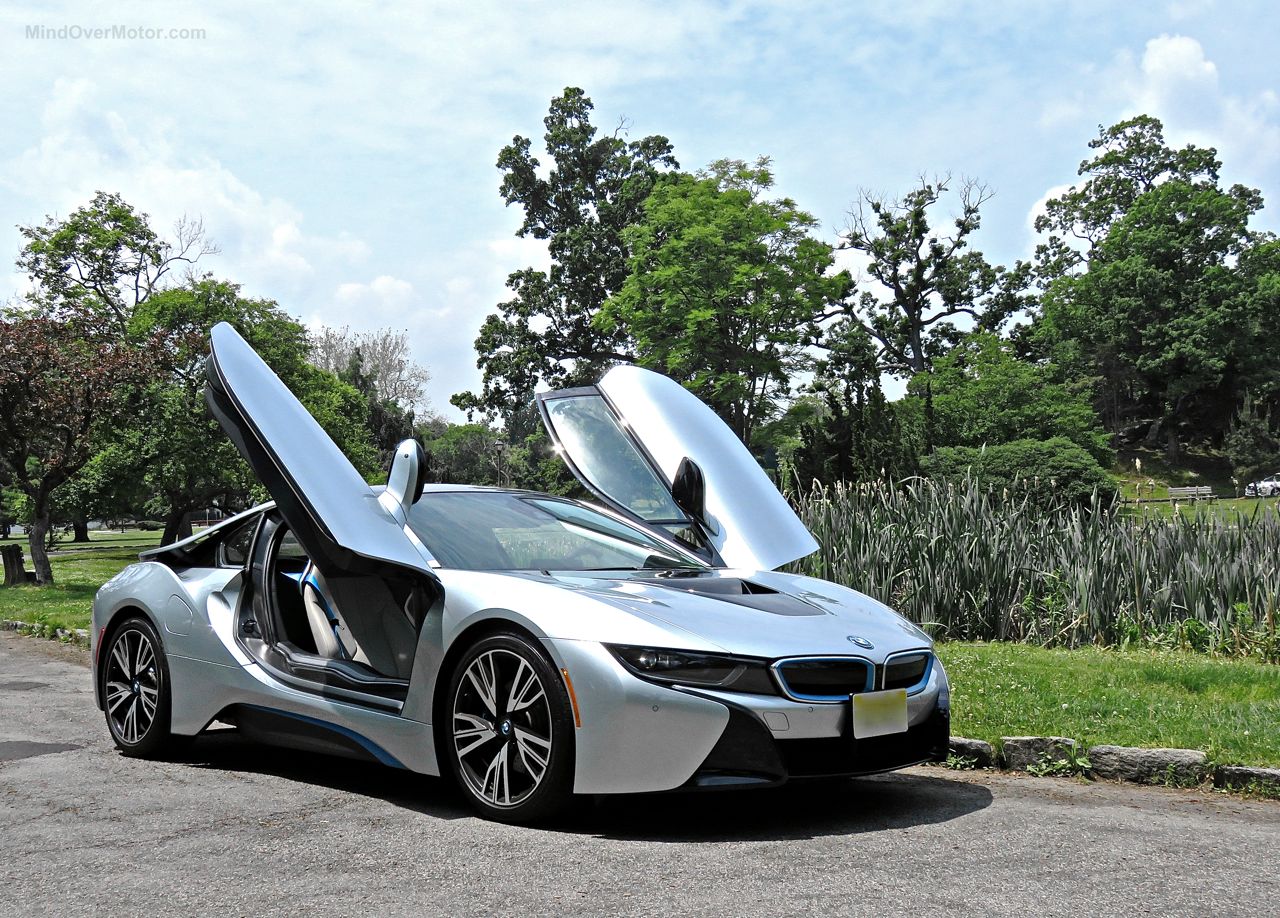 Despite being in the same price range, I don’t think too many purist Porsche folks are interested in an i8, and I don’t think too many i8 folks were ever interested in a manual Porsche. My guess is most of the cross-shopping between brands involves Porsche Carrera models with PDK. Even so, if style is a big concern, no 911 is ever going to turn heads the way an i8 does.

The i8 is hypercar-level exotic on the street, but it’s also familiar and comfortable when you’re inside. It doesn’t have the long list of ergonomic shortcomings that most exotic cars do. In fact, there’s only one hint of exotic-car-idiocy that I can point at, and it has to do with those gullwing doors. They add a few feet to the width of the car when they open, which means you won’t be able to get in or out in tight spaces. It also means that any careless person could park just a little too close next to you, and you’ll have to cancel any appointments you had that day. 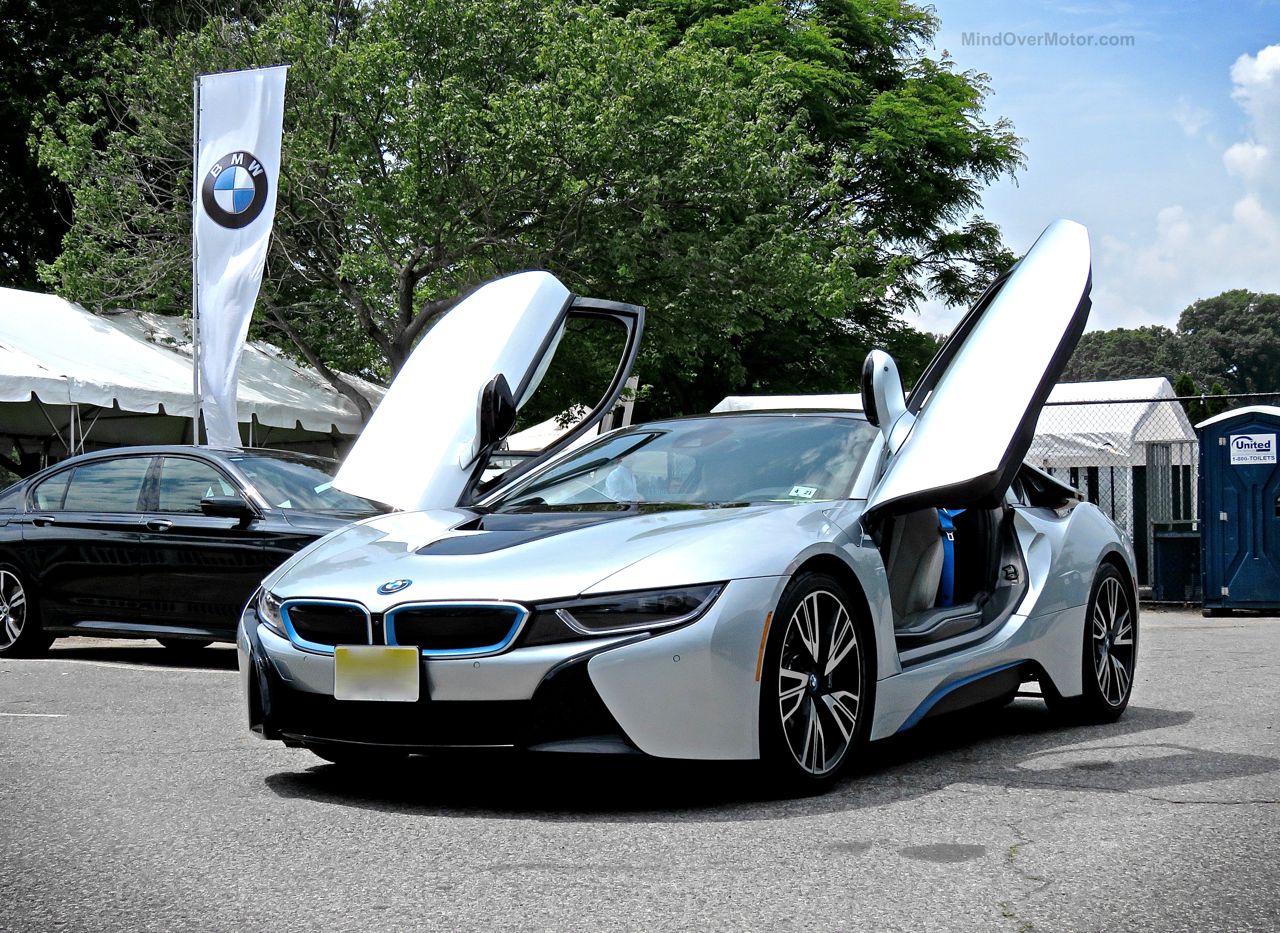 I think BMW absolutely hit it out of the park with the i8. They took a different approach toward making a sports car in this segment, targeting more average drivers rather than hardcore enthusiasts. This is a car that will totally knock their socks off, but will remain user friendly at the same time.

The i8 also has way more than enough speed and handling performance for more casual drivers to enjoy. Blasting down the freeway, or carving corners at a spirited clip on a winding road will bring endless enjoyment in this car to be sure. Plus there’s the added benefit if being “green,” and able to avoid using fossil fuels if you so choose.

For around $150,000 you can have any sort of car you want, and there are endless comparisons you could make. For me the real question is always, “Is the money well spent on this car?”

In the case of the BMW i8, I think it’s a great way to spend the money because you get a lot for it. As an object, there’s a lot to desire about the i8 on a multitude of levels. It offers so much more than just speed and performance alone, and it may well be the “coolest” car you can buy for the money.

I’m thrilled I got to experience the i8 the way I did, being able to try out most relevant aspects of the car. It’s a lot to write home about, that’s for sure. 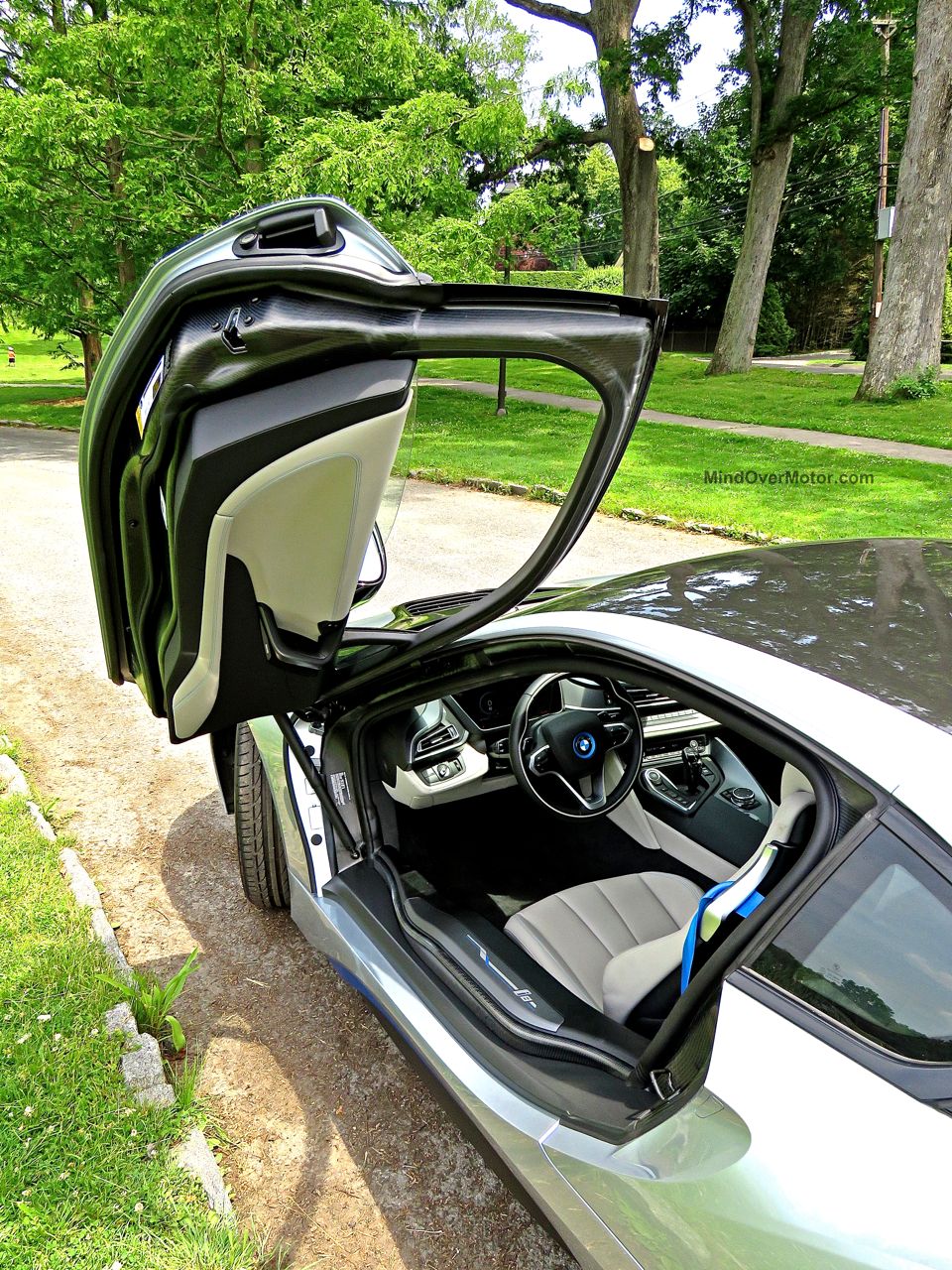 One thought on “My Drive in a BMW i8: A Concept Car for the Street”