There were many new cars revealed at this year’s New York International Auto Show. I was in attendance for the Preview Night last Thursday, where I had access to many new cars, both those revealed at the show and those from recent shows. Like every event I go to, I covered what caught my eye. As many of you may know, I don’t do news in the proper sense because I like to be a little more authentic. What follows are my impressions of the cars as I saw and experienced them at the show, and my opinions of them overall. Enjoy, and please let me know your thoughts on any of them in the comments.

Probably the most significant debut at this year’s NYIAS was the 2014 Cadillac CTS. I say that because GM must get it right if they are to further establish Cadillac as a viable world class luxury brand. I loved the look of the car, it is very well proportioned, and as Al said, it has a very American presence about it. The design isn’t all that glitzy, but it certainly will catch your eye in a crowd. I think the styling is also quite handsome, exactly the way a modern Cadillac should be.

While both cars were roped off, I had a chance to climb inside the red CTS when nobody was looking. I can report good things about the interior. The only real surprising thing is the new optional wood trim (seen above) that is just gorgeous, and is clearly aimed right at Audi. The rest of the inside is all pretty much what you’d expect, borrowing a lot from the ATS and XTS, but that is to say it is very nice and of a solid quality. It is a very comfortable car in all areas, but the back seat may be found to be a tad tight for its class. It is certainly far better than the ATS, but with the front seat in my driving position, I didn’t have too much room to stretch my legs out.

The big thing about the new CTS in my mind is the addition of Cadillac’s new twin turbo 3.6L V6, which pumps out 420hp. This is the engine that the Cadillac lineup has needed for generations, and now their engine lineup no longer seems sub-par compared to the European makes. Also of note is the debut of a new 8-speed automatic transmission in the CTS, which should help increase both fuel economy (especially highway) and performance (allowing for tighter low gears).

All in all, the new CTS looks like it could be a big win for Cadillac, and I think the implementation of that 3.6T will likely fix my issues with the XTS as well.

The C7 Corvette looks amazing in person. Where as the C4, C5 and C6 all kind of had the same flavor, the C7 Stingray is a new direction for the Corvette. I really like it, and I can’t wait to try one out.

This was the first time I’ve seen the Chevy SS in person, aside from the test mule I glimpsed during the Woodward Dream Cruise last year. It is expectedly similar to the Pontiac G8 in proportions, but with more rounded styling. It seems a little more subdued than the G8 was, but it still looks quite good in its own right. To start with it will have the same 415hp LS3 V8 as the G8 GXP had, but GM made a HUGE mistake in not offering it with a manual transmission. In my mind there was a huge opportunity to get a leg up on Chrysler’s 300 and Charger by having a stick SS, but it seems GM’s committees were too blind to see that. That said, I am thrilled the SS exists, and hopefully GM will fix the lack of a clutch pedal when its production moves Stateside from Australia.

Hyundai is dabbling with making a coupe-sedan version of the Genesis, and I must admit that I love the look of it. Hopefully it will make it to production, and hopefully they won’t water it down too much.

Jaguar released their new XJR, and I must admit that I am a little bit skeptical. It is a very nice car of course, but I’m not sure an R badge suits the XJ well for the type of car it is. I reviewed the XJL Supersport a few months ago, and I thought it was damn near perfect as a fast, top-level luxury sedan. The  XJ Supersport performed well but also had a nice refinement to the way it drove, with a rear air suspension keeping the ride soft. I’m worried that Jagur will go too far with the XJR, that the comfort of the XJ may be quite compromised like it was in the XFR. Sure 550hp is a welcome addition, but I just hope they have been careful about preserving the ride comfort found in the XJ Supersport. Keep in mind, though, I am someone who would much rather have a Mercedes S600 over either of the S Class AMG models, so the same will likely apply to this Jaguar.

This one we actually caught the debut ceremony for, and yes it will be quite a rare car, with just 30 destined to be built. The XKR-S GT is a special model for Jaguar North America, so finally we get something Europe doesn’t. That said, while the car itself does look immensely cool, I’m left a bit cold by the details. Sure, they’ve tweaked the suspension significantly to make it faster on the track, but it has the same 550hp as the normal XKR-S, and it is still mated to an automatic gearbox with torque converter. Clearly this is supposed to be a Porsche 911 GT3 RS of the Jaguar range, but I just can’t get over having a spongey torque converter in a “track focused” car. Sure Jag does have the best auto on the market in my opinion, but it just doesn’t work for a car like this, no matter what they do with it. Also, the interior wasn’t as stripped as it should’ve been in my opinion. With a Porsche GT3 RS you get that fancy roll cage in the cabin, but this Jag still comes with a back seat. I’m sure the XKR-S GT will be very fast on a track, and I’m sure all 30 will get bought up quick (if they haven’t already), but I just think they could’ve done better with it. Most of all, at this point, I think Jaguar desperately needs a solid dual clutch gearbox if they are going to be making more cars like this.

Its an AMG, its a wagon, and for the first time it’s all wheel drive, deal with it people. If you ask me, with 571hp and 590ft/lbs on tap, having all wheel drive traction is a good thing. It should also make this thing considerably faster and more accessible for the common drivers, who would have just wound up endlessly power sliding in the previous, rear-drive E63 AMG. This thing is going to be seriously, and I mean seriously, fast on the street. So red light racers beware because the soccer mom in the station wagon may blow you out of the water.

After seeing, and sitting in the CLA 45 AMG, it has become clear to me that this will be a very different type of Mercedes. The CLA in general sits on front wheel drive architecture, and the CLA 45 has a front biased all wheel drive setup, with only 50% of torque able to be sent rearward. Needless to say, this will not be a drift machine, and will need to take a different approach, one similar to that of a Mitsubishi Evo. Precision handling needs to be the CLA 45’s specialty, and if Mercedes can make it handle similar to an Evo, I think they may have quite a hot product on their hands.

The funny thing is, the CLA 45 is actually pretty similar to an Evo in many regards. It is all wheel drive on front-drive architecture, it has a 2.0L turbocharged engine, over 300hp (355hp to be exact), and some very uncomfortable racing seats. That’s right, this is a Benz that isn’t comfortable. Those front seats are proper racing buckets, with bolsters that keep you very, very snug. This will be fine for true enthusiasts, but likely won’t fly with normal Mercedes clientele. In my mind, if the CLA 45 delivers Evo style handling performance, then those racing buckets will be worth having. But if it doesn’t, I’m going to be very disappointed…. and uncomfortable.

The 991 GT3 looks great in person. That’s about all there is to say. The real test will be how it drives with its PDK gearbox.

The new Range Rover is quite a masterpiece on all fronts, and the Sport makes it that much better for lovers of high performance SUVs.

The Rolls Royce Wraith is one of my favorite debuts of the year, and it was great to see it in person in New York. As a bonus I got to sit in it and check it out up close during the preview night, and all I can say is, “What a car!”. Let me start by saying that I really loved the Rolls Ghost when I drove it back in 2011, and the Wraith is basically a coupe version of the Ghost. I thought the Ghost moved quite well with 563hp, but the Wraith’s 6.6L twin turbo V12 has been upgraded to produce a massive 624hp and 590ft/lbs of toque. Think of the Wraith as a top of the top luxury GT car, instead of the traditional Rolls Royce limo. That said, it is still immaculately fitted with lots of fine wood veneer throughout the cabin (check out the door above). The Wraith also features Rolls Royces starlight headliner (above), found only in the Phantom until now. Basically there are LED lights woven into the headliner fabric, and the effect it quite breathtaking, like the constellation set you had on your ceiling as a kid.

The Rolls Royce Wraith is a very special car, a new model that seems to fit the Rolls Royce name well. Hopefully I will find a way to get behind the wheel of one for a review at some point, fingers crossed…

This is the concept car for the next generation WRX, which I imagine will debut in production form at the Tokyo Motor Show in November. Subaru is making the WRX its own model, taking it off of the Impreza platform. I really love what they have done with the concept, and I hope most of it stays the same for production. It has some really nice lines and it is a lot bigger than it looks in pictures, surely bigger than my 2004 STi. There aren’t any details on engine specs or anything yet, but I cannot wait until the new WRX hits showrooms.

This is the new GTI. It is exactly what you would expect it to be, in every way. But that is a good thing.

Miscellaneous pics of other cars from around the show 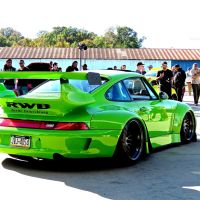 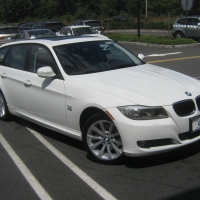