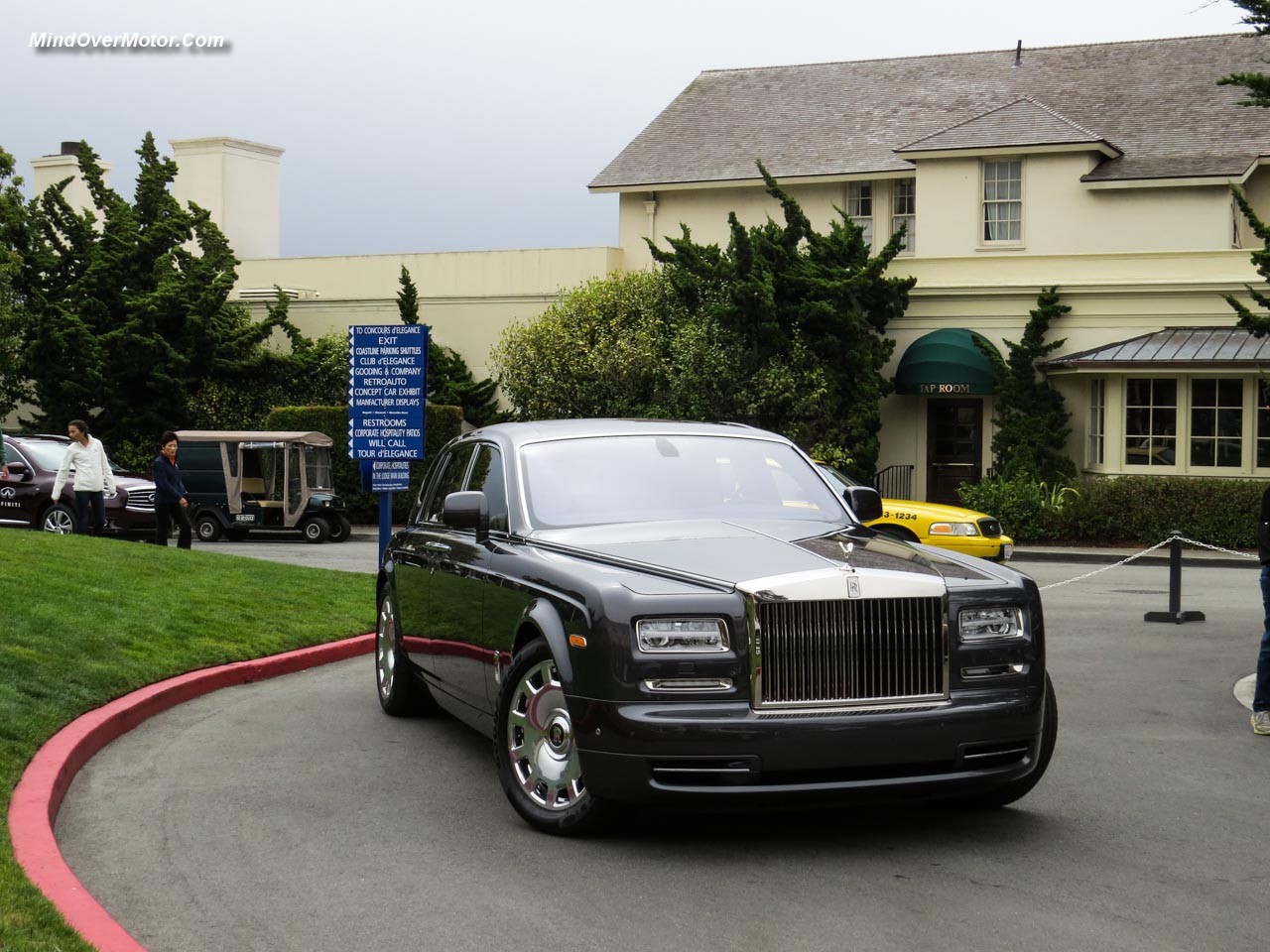 Rolls-Royce has every reason to act pompous about their cars.  The Phantom, their current flagship, has been on the market since 2003, and just this year, has been restyled as the Series II, which includes a large number of under-the-skin changes and a new front fascia. While at Pebble Beach, Nick and I had just enough time to review this classy chariot, but not enough time to take turns driving it. As a result, this review will concern what the big Phantom II is like from the driver’s point of view. 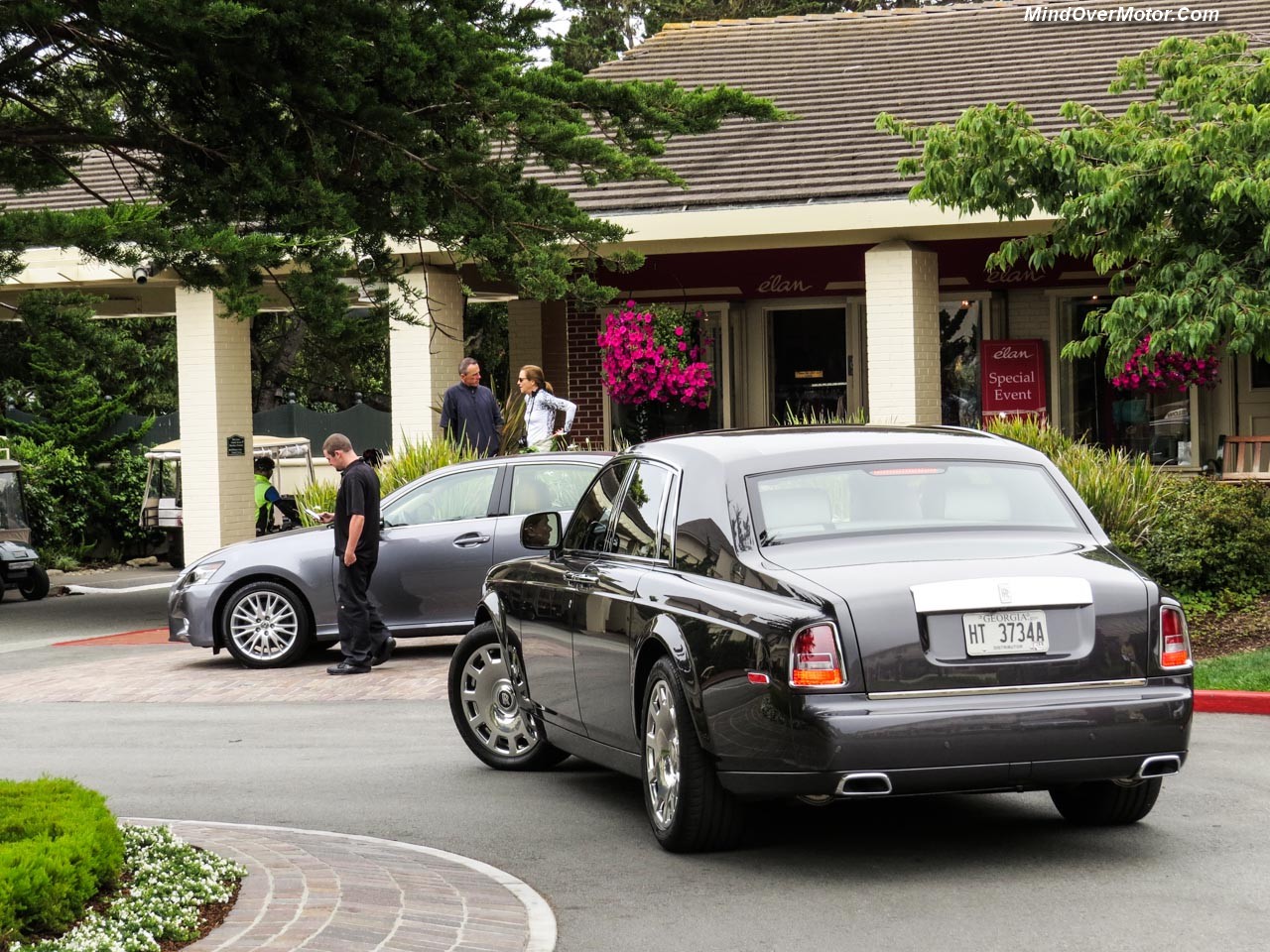 The new Phantom II looks much more pleasing to my eye than the old model, with slim LED headlights up front, leading off the rest of the changes on the flagship sedan.  The tall roofline and hulking side profile create an imposing silhouette against the sculpted landscaping of the Pebble Beach Lodge, but in a properly British way.  The chrome radiator grille flashes in the slight sunlight, showcasing the Spirit of Ecstasy in all her glory.  While the Phantom won’t win a beauty contest, it’s unmistakably imposing and it makes a statement that no other four-door can match.  The rich finish of the champagne gray paint is deep and offers an air of class on top of class. 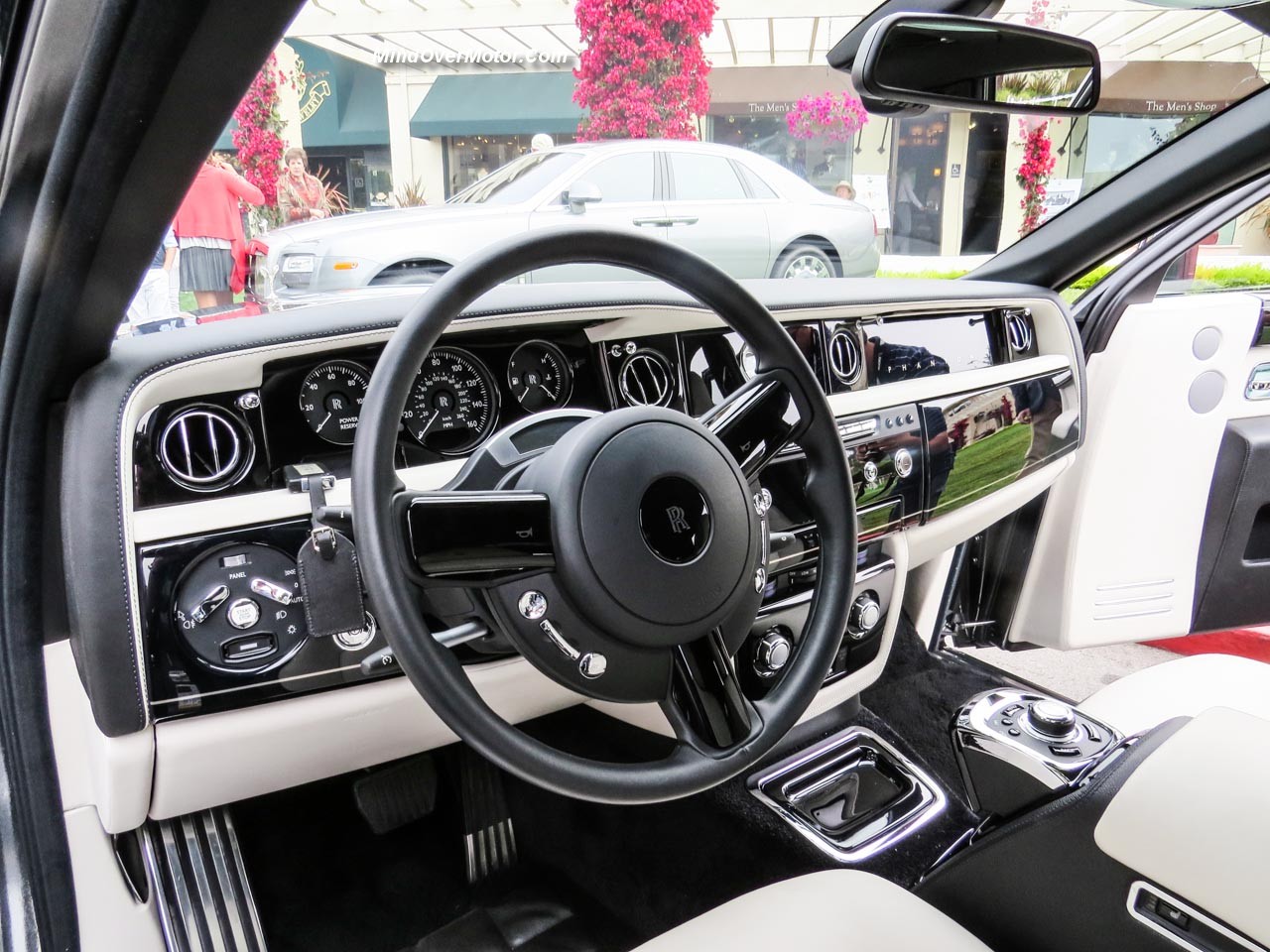 The interior lines are, as the exterior, classic.  A three-spoke steering wheel carries the column-mounted shifter, as is proper in a Rolls.  There is no dial for a tachometer–a Rolls needs no such thing.  In its place lies a “Power Reserve” indicator, which indicates how much of the engine’s power is being used by the driver.  The seats are not seats so much as they are chairs sitting in the interior.  The tall roof is covered in fantastic material and the curve of the interior furnishings belies a sense of modernity to spruce up a classic look.  Altogether, nothing looks out of place on the inside, as one must expect in a Phantom. 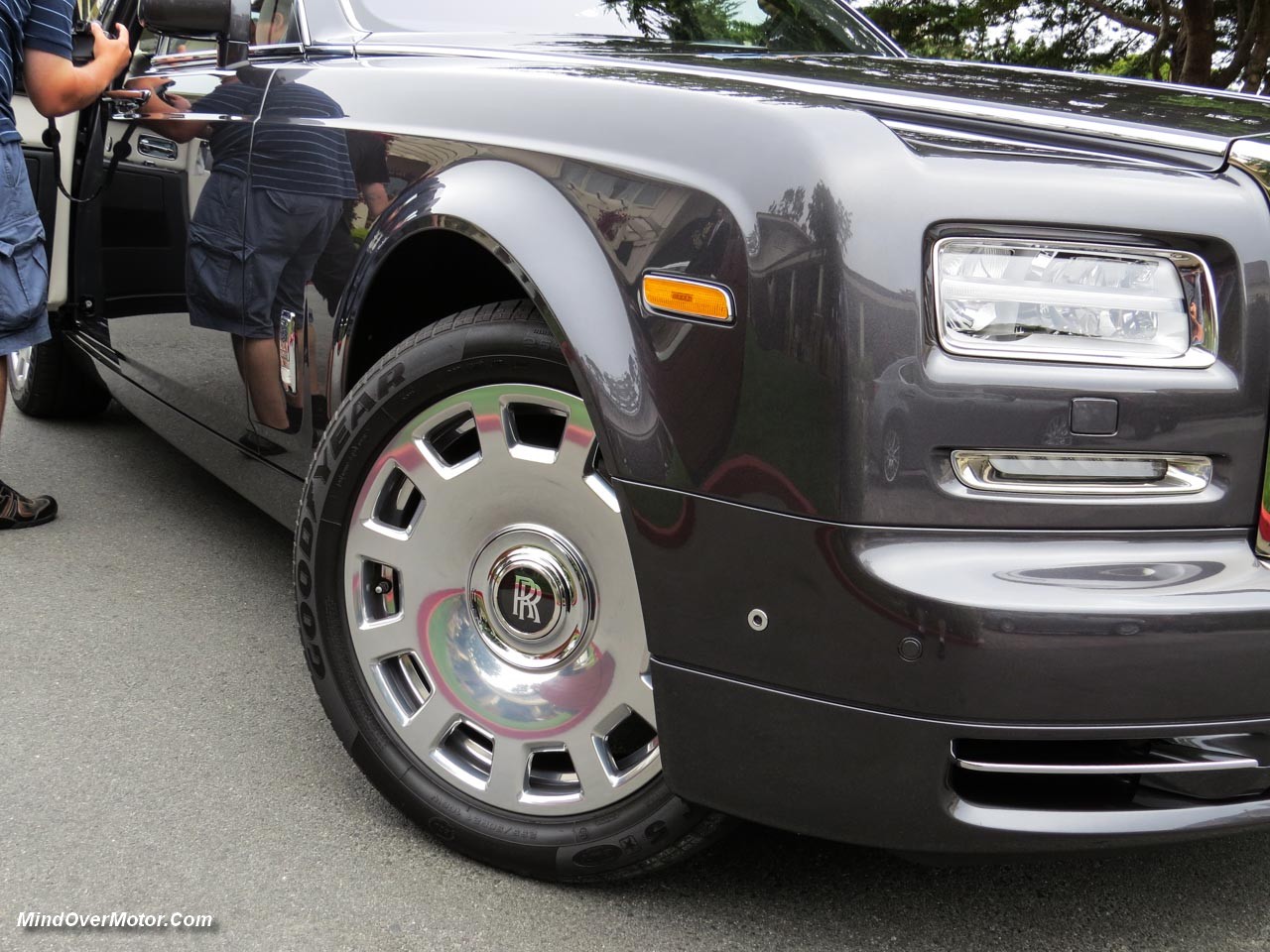 Handmade cars can be all over the board, but that would be unfair to a Rolls-Royce.  The build quality is impeccable on this car.  Shut lines on the exterior are close and clean, while the parts fit and finish are impeccable.  The chrome is fitted very well and the Spirit of Ecstasy rotates cleanly in and out of its cubby atop the grille.  The wheels are polished to a shine that won’t be matched by even the most expensive mirrors, while the glass is like crystal.  Everything feels heavy, and the doors open and close with a hardy “thunk”–that noise sounds better and better every time.  You do not slam the doors on a Rolls-Royce Phantom.  One simply closes them. 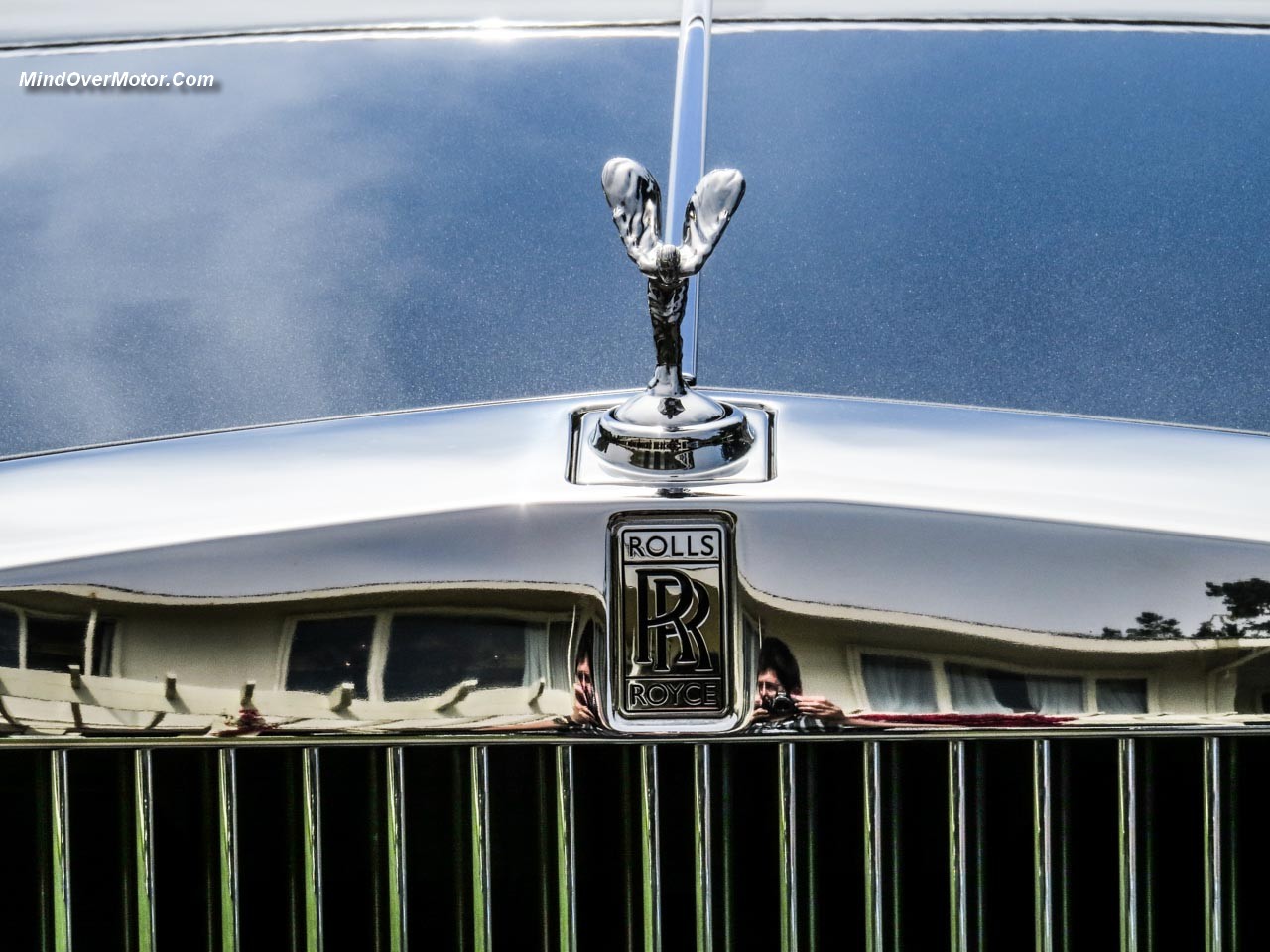 The interior quality is the definition of “they don’t make them like they used to” in every perfect way.  Large swaths of piano black wood cover the dashboard and console, but silently rotate away to reveal the audio system on the dashboard and the seat controls on the center console.  The wood panels on the steering wheel are of equally high quality.  The leather is soft and supple–Rolls-Royce will only use the best hides possible for their automobiles, and this sort of attention to detail shows.  There is more than enough room for anyone up front, and the deep pile lambswool carpets are always welcome anywhere, especially in an automobile such as this. 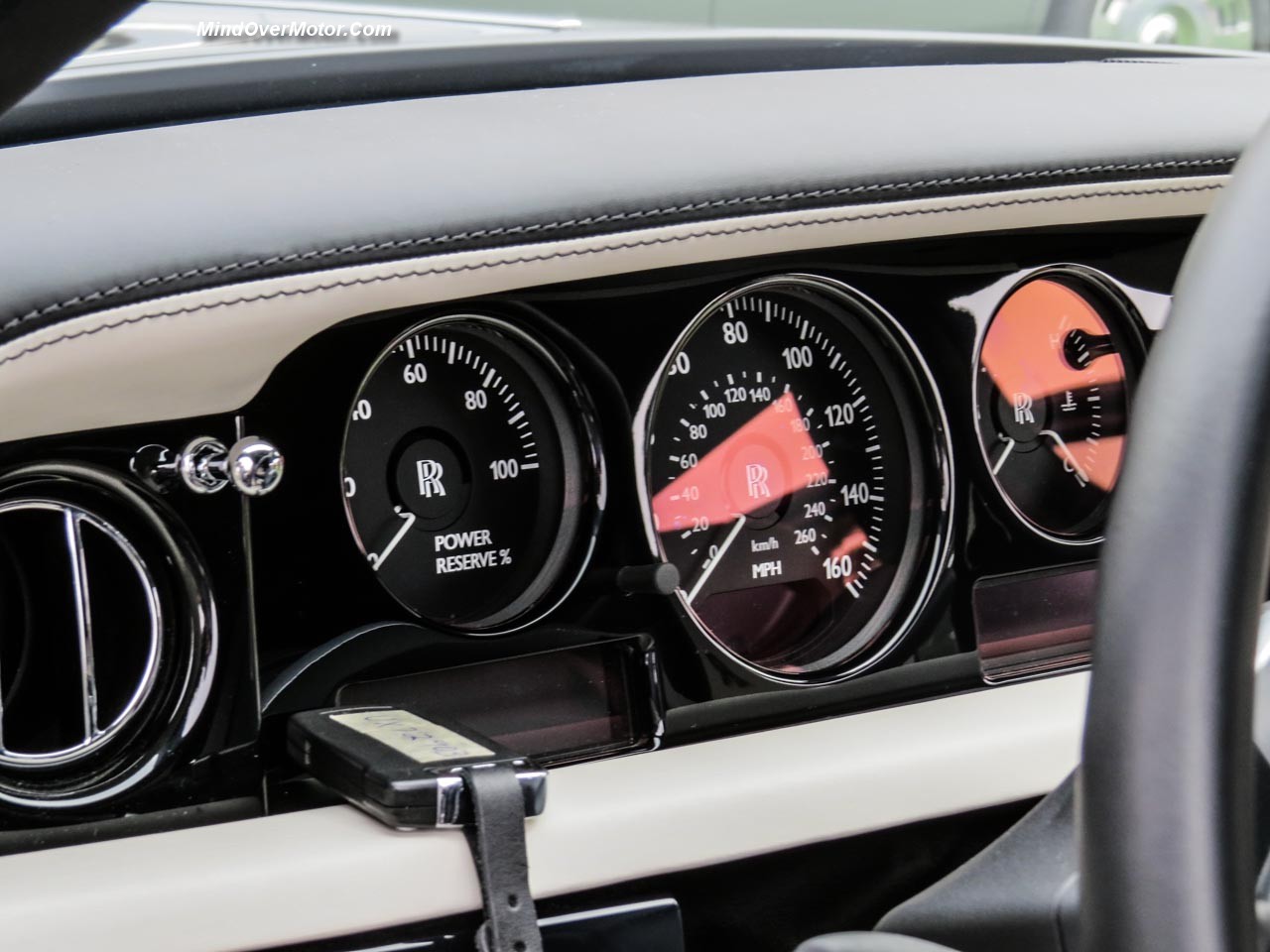 The front seat of a Rolls Royce Phantom Series II is supposed to be for the chauffeur whose salary is maybe 15% of the cost of this car.  That didn’t stop me from turning the key and sliding the column shift to “D”.  The new Series II has an updated 8-speed automatic transmission to replace the old 5 speed unit, and I did notice the difference from the Drophead I piloted in 2011.  The transmission shifts more smoothly than before and does not hunt between gears.  The engine, while unchanged, is still the BMW-sourced 6.8L V12 we all know and love.  Rolls-Royce used to publish power figures as “sufficient” rather than the actual numbers, but we can report that the Phantom Series II packs 460hp and a very healthy 531 lbs-ft of torque under the long hood.  Stomping on the pedal, although very impolite, causes the big beast to move swiftly, but with a strong feel of grace, as if it will put up with some degree of tomfoolery. 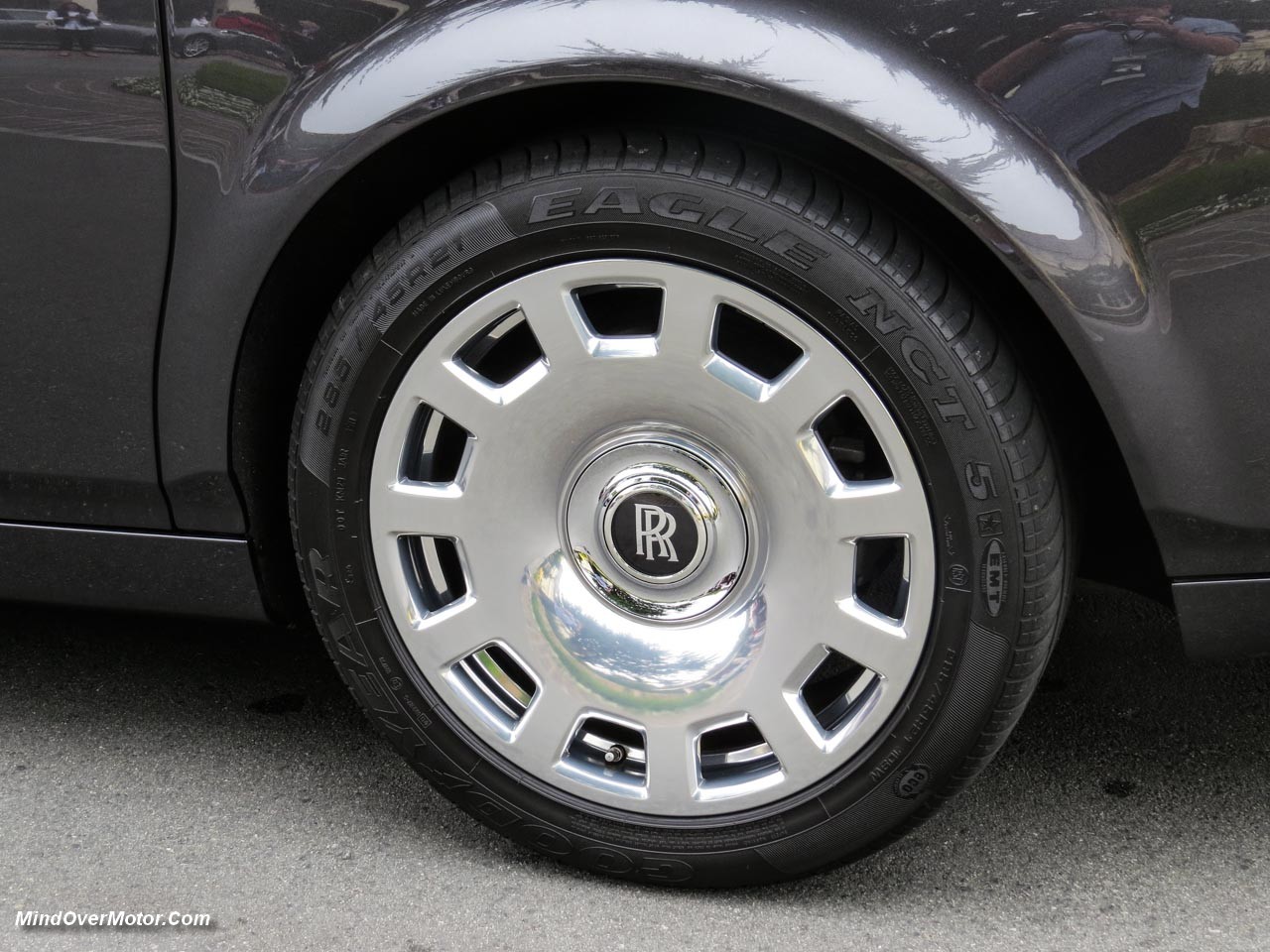 The more important part of the drive had to do with the ride, handling, and brakes.  This car drives very well for its size.  Luckily for me, Frank Sinatra was wafting through the interior rather than Motorhead or Dream Theater, which encouraged me to drive with some class.  So, as I climbed up the rolling hills and the forest scenery passed us by in Pebble Beach, the Phantom never felt beyond my reach.  The steering, while very light and offering little feel, is still very accurate and controlled, while the brakes are effective and the nose never dives at all.  The best engineering, though, has to be the ride quality.  Absolutely nothing is allowed to intrude the interior experience at any time.  Bump in the road?  Cracks?  Slight dips in the pavement?  The Phantom Series II laughs at these things.  For that matter, the suspension does not notice these plebian aliens of the pavement.  The big girl simply rolls along.  Combine that with the soft seats and quiet demeanor, and this is one of the most serene vehicles one can find. 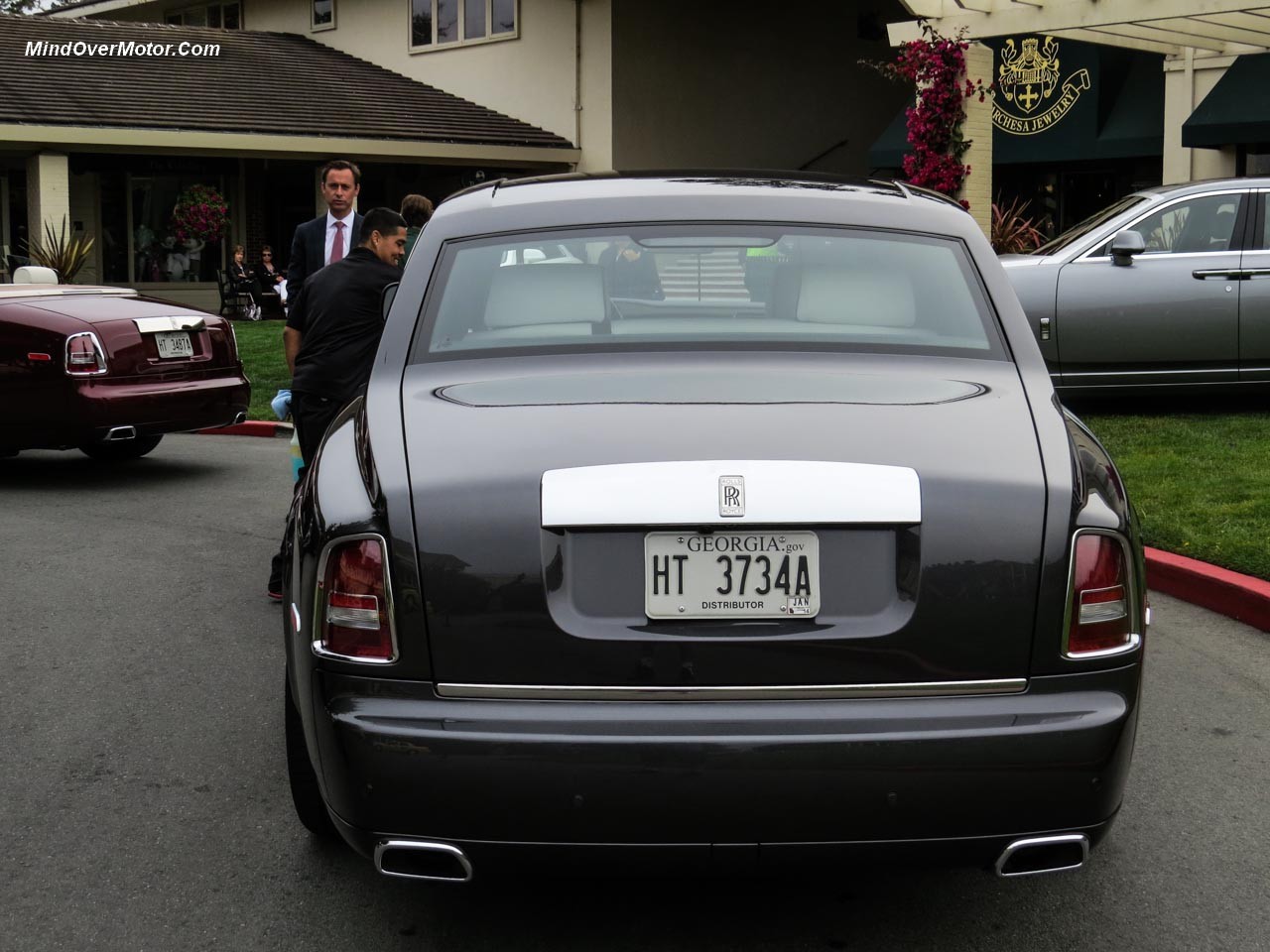 The Phantom is not for everyone.  A new one costs north of 300 grand and the test car that I had the pleasure of piloting was close to 500 grand, possibly more.  At the time of this writing, that’s more than the cost of a home in my hometown.  While the equipment list is staggering and the list of custom options is endless, anyone considering a car like this one is likely to find that the Phantom may be somewhat in a class of its own–the Maybach is out of production and the Bentley Mulsanne is marketed more as a driver’s car in this echelon. 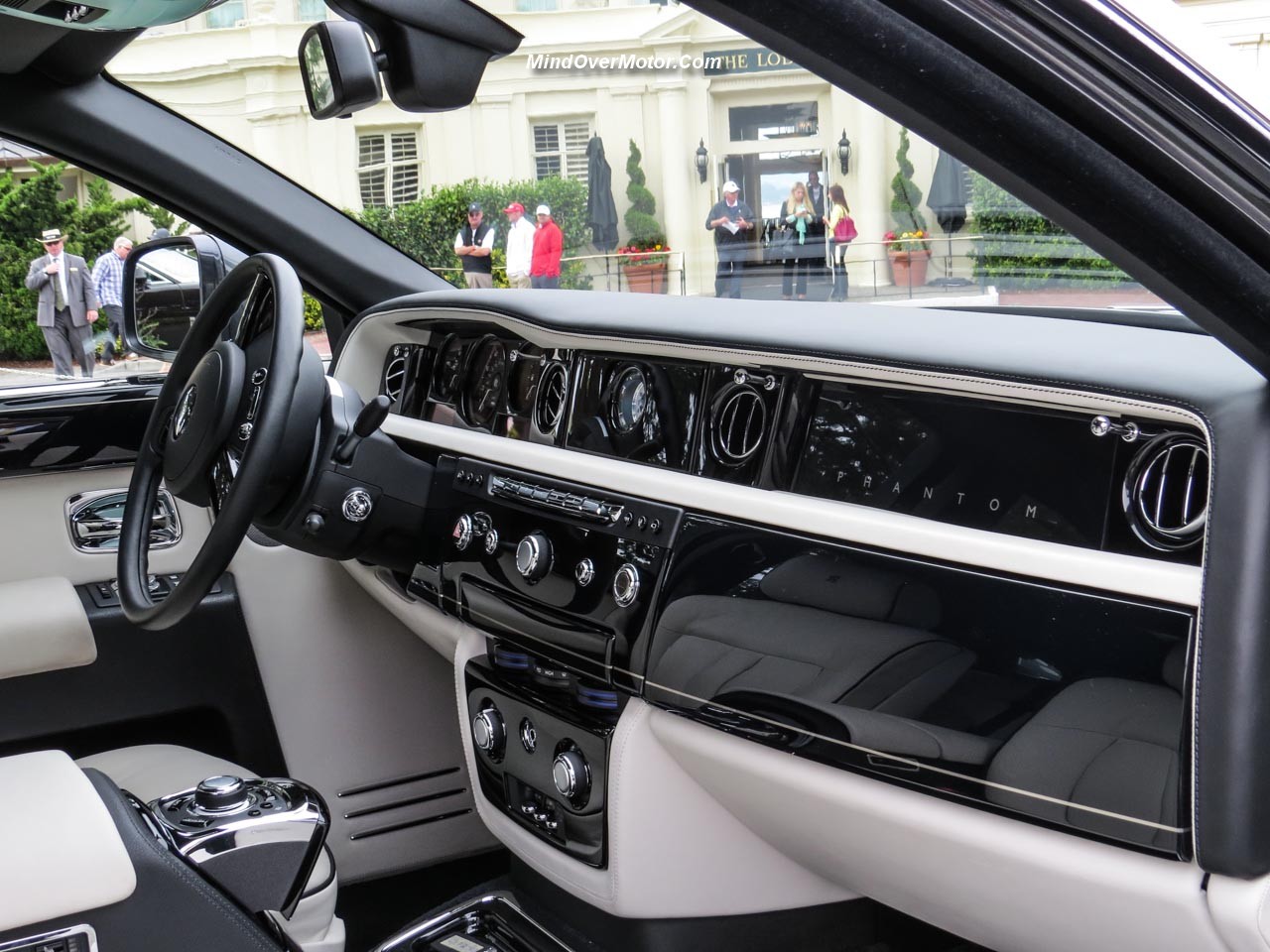 The interior feels first-class.  The switchgear is top-notch and the new driver interface system is the same as the current Ghost and it’s very easy for me to use, while the layout is easy to figure out after a few minutes.  Even the shifter feels right.  The requisite umbrellas are in the door panels, the leather is befitting of the double-R, and the gas mileage doesn’t really matter, right?  I mean, who’s going to need to know that information besides the driver (Okay, fine, it’s 11 city, 19 highway, 14 combined from the EPA, so it’s at least out of the single digits). 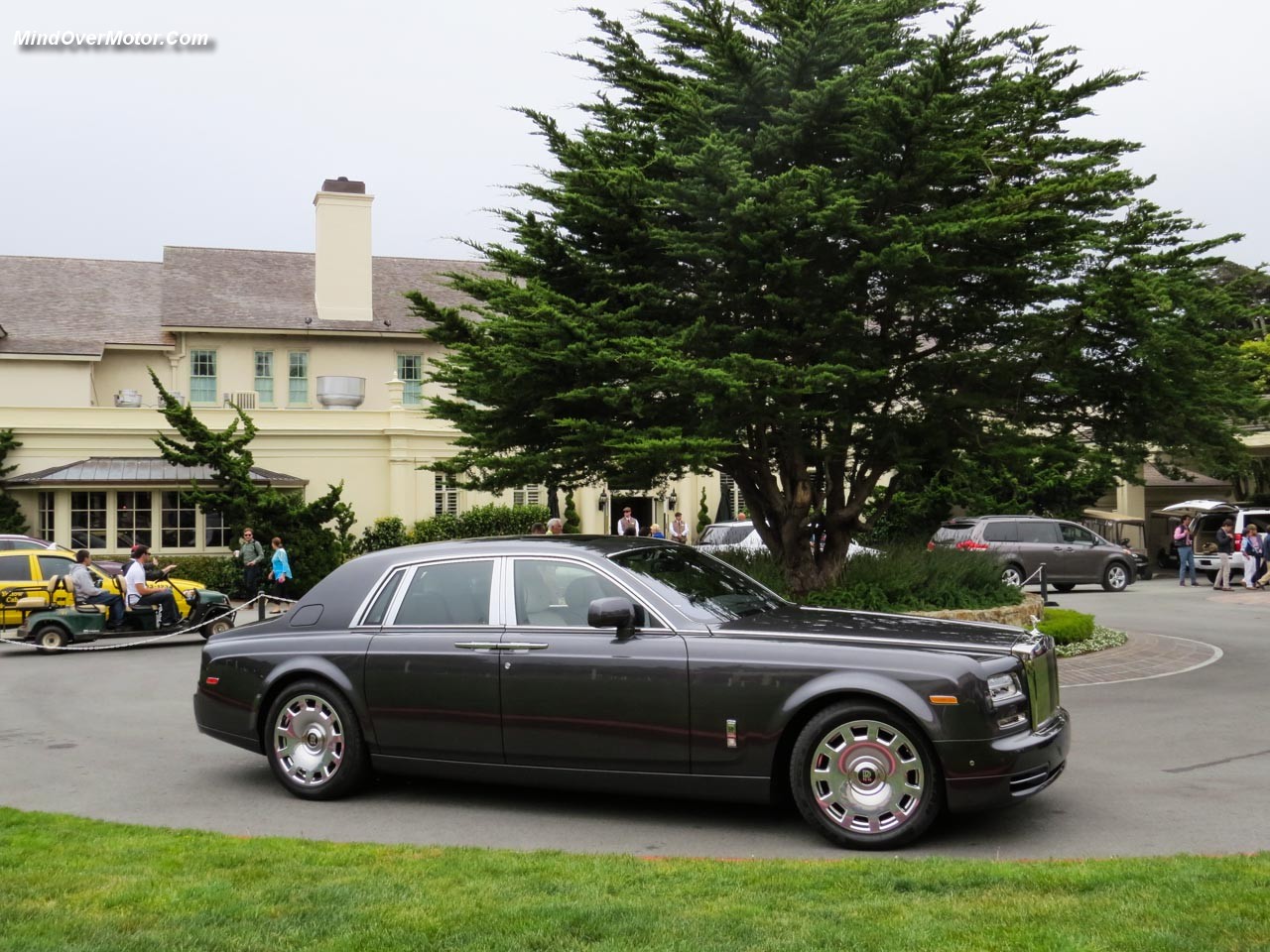 Overall, it’s pretty clear that the driver of a Phantom will still enjoy the experience.  While the Phantom Series II is definitely a car for the rear seat passengers, the front is no packing crate at all and certainly has the right boxes ticked.  I thoroughly enjoyed my opportunity to drive this car, despite it not being at all sporting.  That’s not the point though.  The point of the Phantom is to enjoy the scenery in the most serendipitous, conspicuously consuming way possible at all times.  What more could the ultra-rich want?