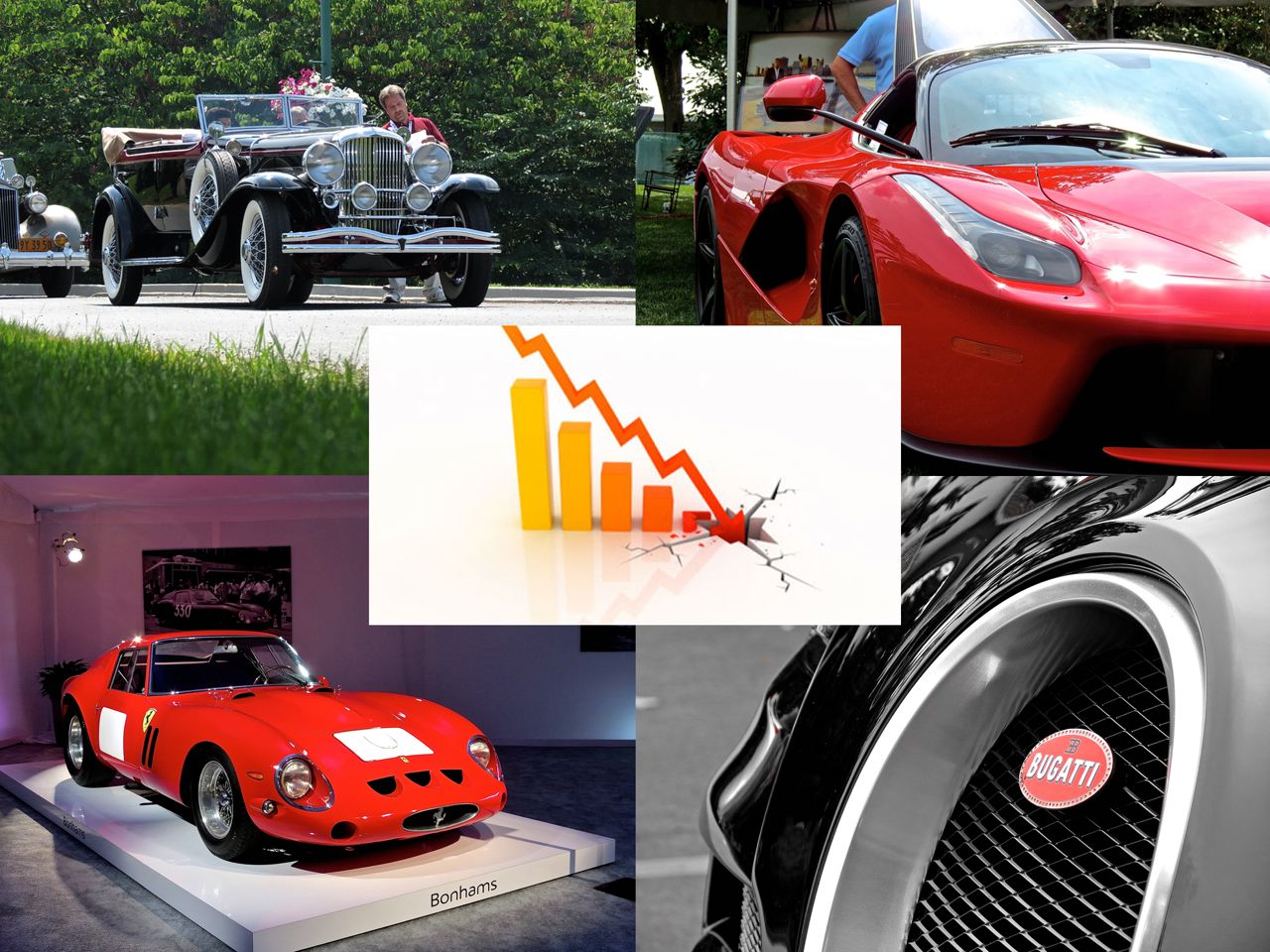 Last year at Pebble Beach we saw a 1962 Ferrari 250 GTO sell at auction for a record $38 Million. People “ooooed” and “aaaahhhed” at the sale price, but many were also underwhelmed because another 250 GTO had sold privately for $50 Million, and they had wanted to see a new world record.

From a larger economic perspective, this is madness in a most ludicrous form.

Now, I want to begin by stating that I am not someone who is against wealthy people, or against buying cool and expensive things. I am is someone with a degree in both economics and sociology who wants to see capitalism thrive in an an optimal state, where opportunity is abundant and competition is fierce.

True capitalism is an endangered species right now in America, and indeed the rest of the industrialized world. The danger is not communism/socialism, but the opposite, oligarchy. Too much of the total wealth lies in the hands of too few members of society, and the economy is being strangled more and more. In short it is because our entire economy is based around consumerism (buying and selling goods and services), and most people have less and less money to spend. 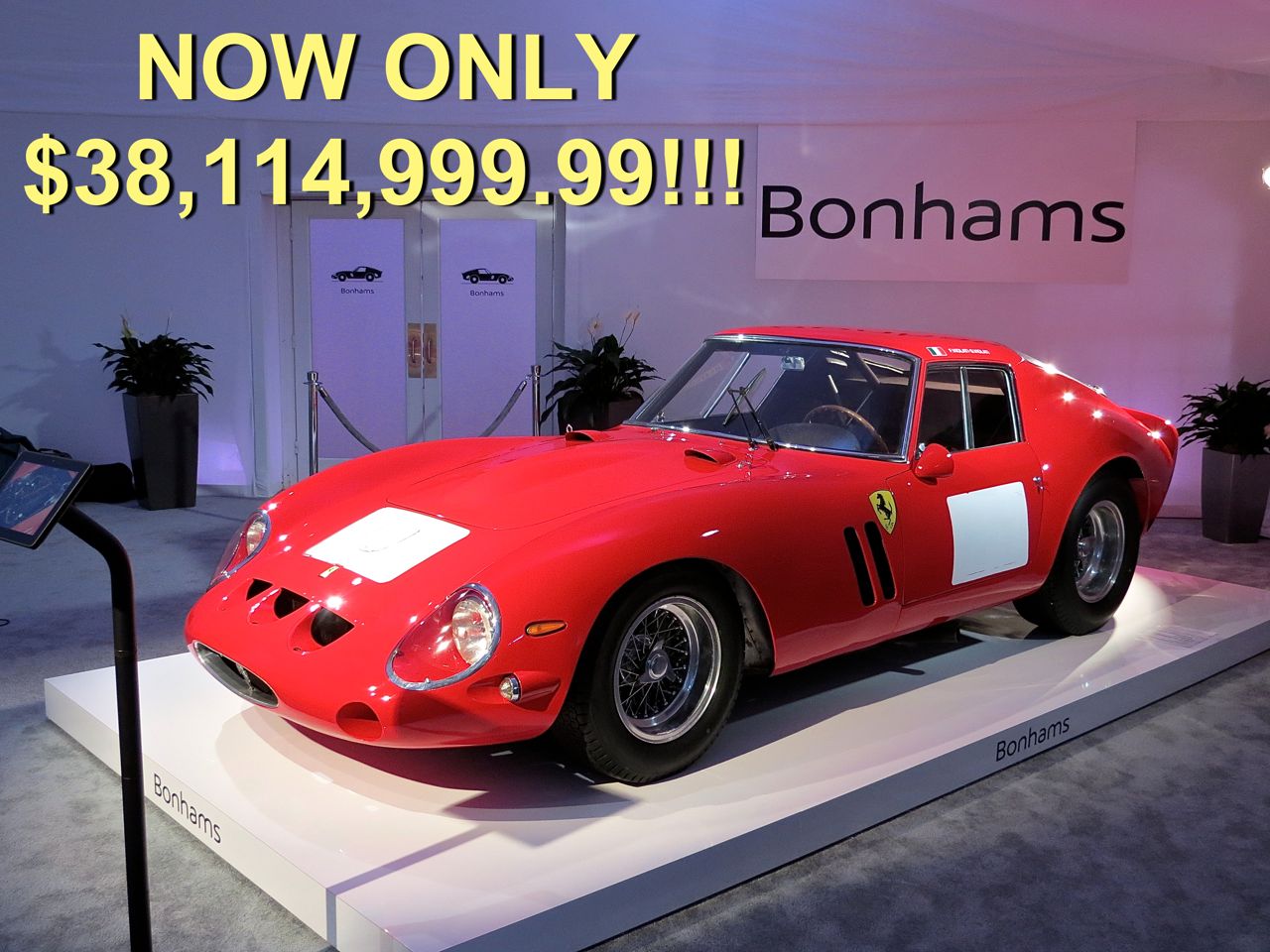 The $38 million GTO was sold at auction, so it did create a few jobs, but only a very small handful considering the amount of money spent.

The $50 million GTO, on the other hand, sold privately and created no jobs whatsoever.

This, in essence, proves that “Trickle Down” economic theory doesn’t inherently work, and that “job creators” would often rather spend their money on things that don’t create any jobs at all.

The same $50 million could also be used to buy 1,000 BMWs for $50,000 a piece. That would help to create thousands of jobs across an many industries linked to auto production.

Trickle-down theory makes the assumption that people will act rationally with the well-being of the economy in mind, but in reality the just act on self interest and impulse. The purchase of a collector automobile is not really a rational purchase, but one based on a subjective desire. In terms of the economy, it isn’t healthy, but it does a great amount for the soul of an individual who is passionate about cars.

I’m all for people using their money to cater to their desires, that is human nature. But that also means that the rational structure of society needs to be set up to ensure the well being of the overall economy. You can’t rely on individuals to be rational, and to share the wealth on their own accord.

If you think otherwise, then I encourage you to go buy three dogs, and then pick one of the three and feed only that dog every day. If I’m wrong, then the dog you feed will stop eating when he’s had enough, and share the rest of the food with the other two dogs. If I’m right, you’ll be left scratching your head, wondering why you have one fat dog and two starving dogs. 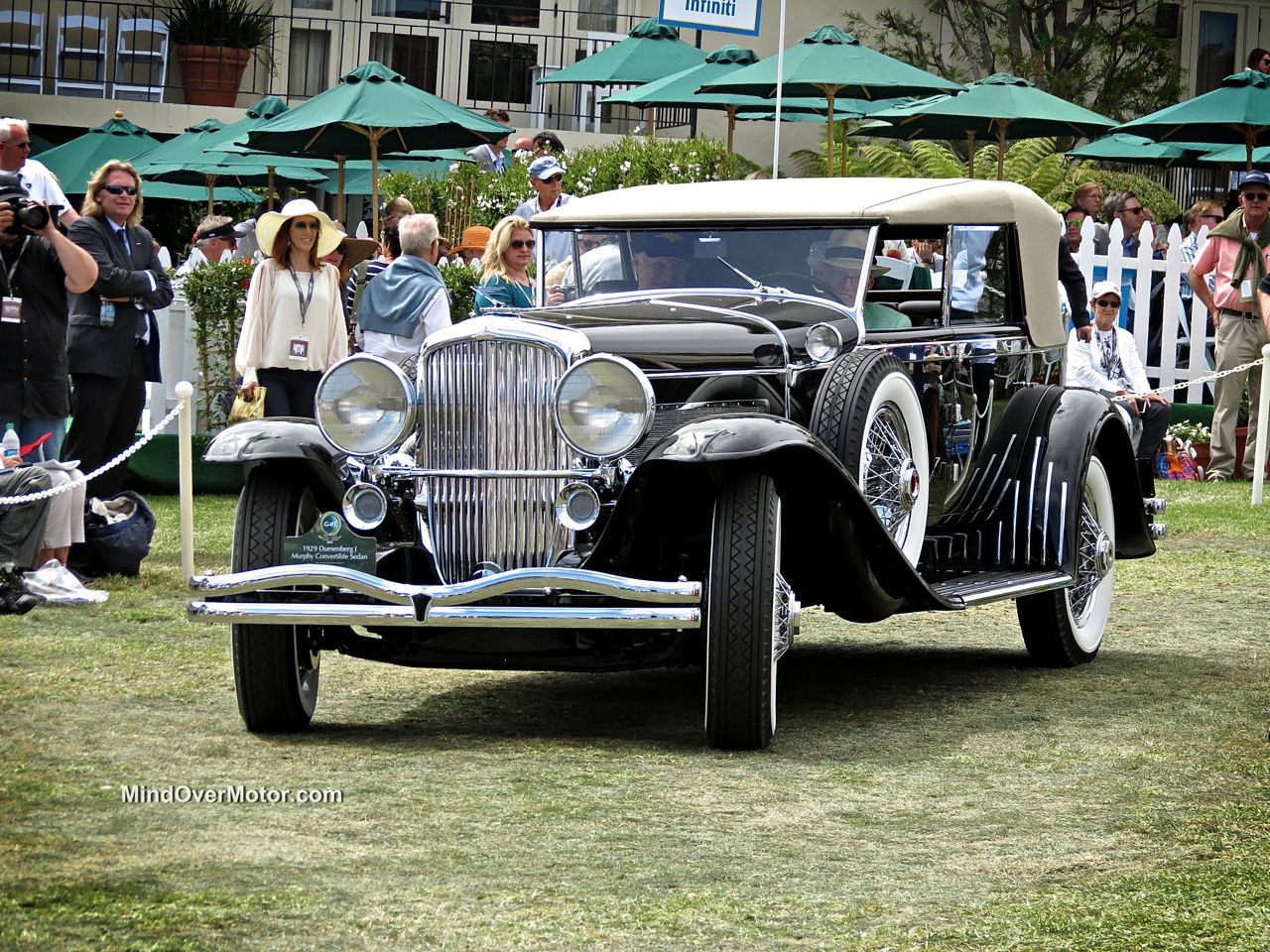 So what am I saying?

The massive increases we’ve seen in the value of collectable and luxury automobiles in recent years shows very clearly that the wealth has become too concentrated in a small percentage of the population. The inflated prices represent money being wasted, and not being put back to work in the larger economy.

The last time we saw this sort of phenomenon was in the 1920’s and 1930’s, with the extremely opulent cars made by such names as Cadillac, Duesenberg, Packard, Rolls Royce, Delahaye, and (the original) Bugatti.

What also happened in that time?….. a little event known as the Great Depression.

Now, I’m not saying the wealth gap at the time was totally responsible for the Depression, but it certainly made it more difficult to get out of. We actually wound up needing a second world war to boost industry and the drastic policies of the New Deal to get the majority of the population back on their feet.

What followed was one of the largest economic booms ever seen, driven not by wealthy aristocrats, but by millions of middle-class working people consuming goods and services on a mass scale. That is really what we need again, some change that will bring the total wealth to a much larger percentage of the population.

I’m not saying I don’t love the seven-figure hypercars like Paganis and Bugattis, or the timeless classics like Ferrari 250 GTOs. I love those cars to death. But demand for those doesn’t need to come at the expense of the well-being of the economy as a whole, and right now it is. 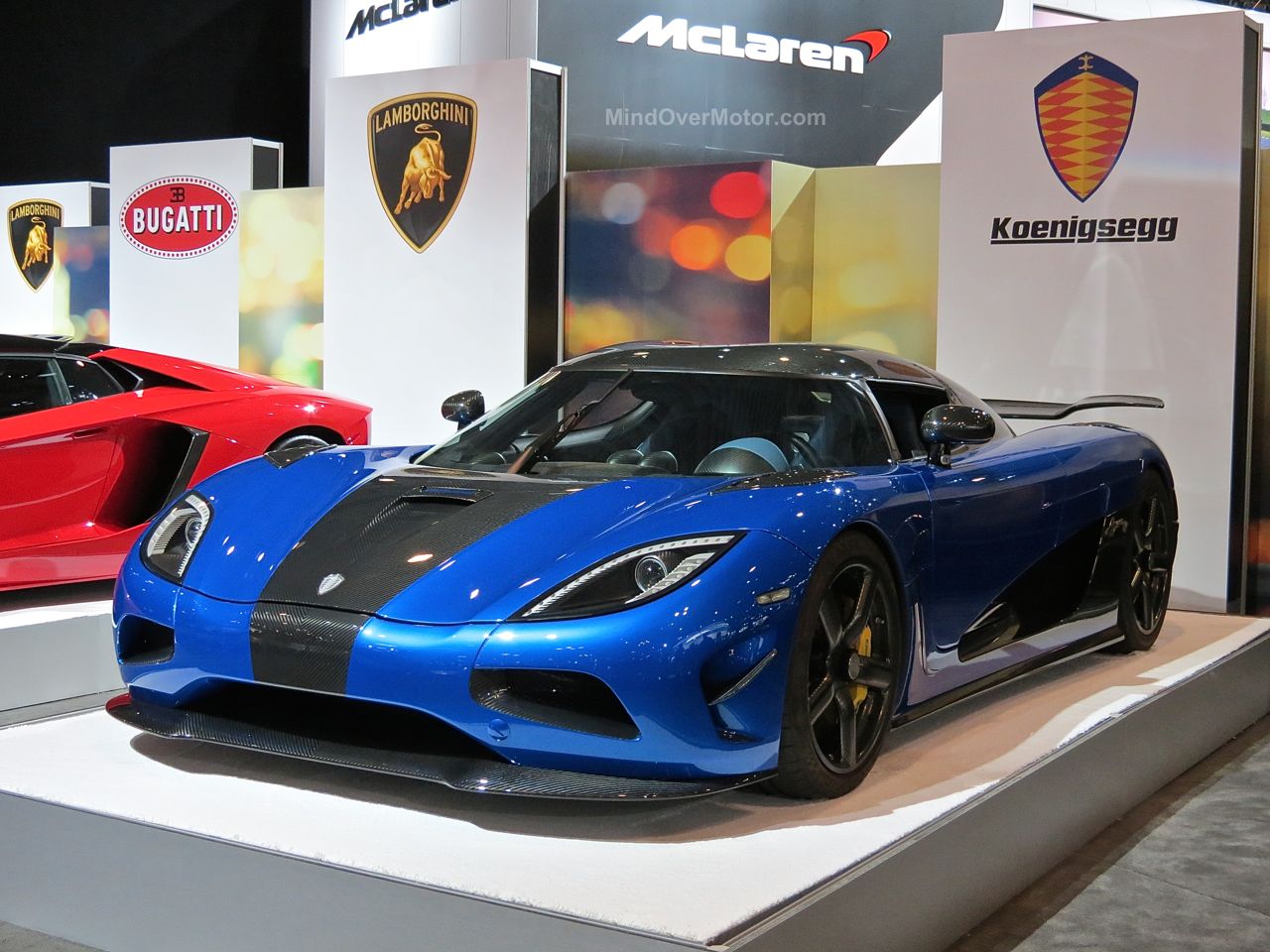 Rich people will still be insanely rich if the wealth were to spread out to the degree I stated. There would still be hypercars running around, and Ferrari GTOs would still fetch high bids. All of the same people would be buying the exact same cars and items, but just for a lesser dollar figure.

Does that change the car itself in any way?…. Of course not. It’s the same Columbo V12, it has the same racing history, and it has the same beautiful shape. I’d still want a Ferrari GTO if it were only worth $50 bucks.

It’s not about the money for true enthusiasts. It only became about the money fairly recently when a few people, who have more money than they could ever possibly spend, all decided they wanted the same car.

Now everyone is looking at these cars as if they are some risk-free investment, and people are buying these cars for that reason alone. But it’s just the same as any other economic bubble in the past. It’s all based on nothing real, and the bubble will burst in time.

Until then, its a game of Hot Potato being played with all of these collector cars, and nobody wants to be the guy who spent $70 million on a Ferrari GTO on the day when its value drops to $10 million (or possibly $3.99 and a kick in the nuts).

All of these people who are spending big dollar figures just for the sake of doing so are going to get burned badly. Sure, maybe it adds an inch to your dick when you land that high bid to a thunderous applause, but its a foolish game to play and the odds will catch up.

Anyone who has made their own money, and still knows the value of a dollar, should know to treat these investments as high risk. Everyone seems to be saying the ship cannot sink, and that always means the ice berg is coming.

In terms of raw materials, a Ferrari 250 GTO is probably only worth a few grand. It’s historical significance makes it worth more, but that is an entirely subjective value. The car isn’t made out of $50 million in solid gold, so it’s value is really no more solid than a little piece of paper with some dead guy’s face on it.

So maybe the car market will go up another 50% even before it drops off, but its not a bet I’d stake a lot on. It is a bubble driven by the excessive wealth gap, but history has shown us that the wealth gap can only get so large before the masses put the fat cats under the guillotine.

So if the wealth gap gets much larger, the value of luxury goods may collapse altogether with some sort of revolution. Alternatively, and more likely, government policies will change to favor the wealthy less and the working and middle class more. That will bring down the extreme prices for collector cars to a more sane level. 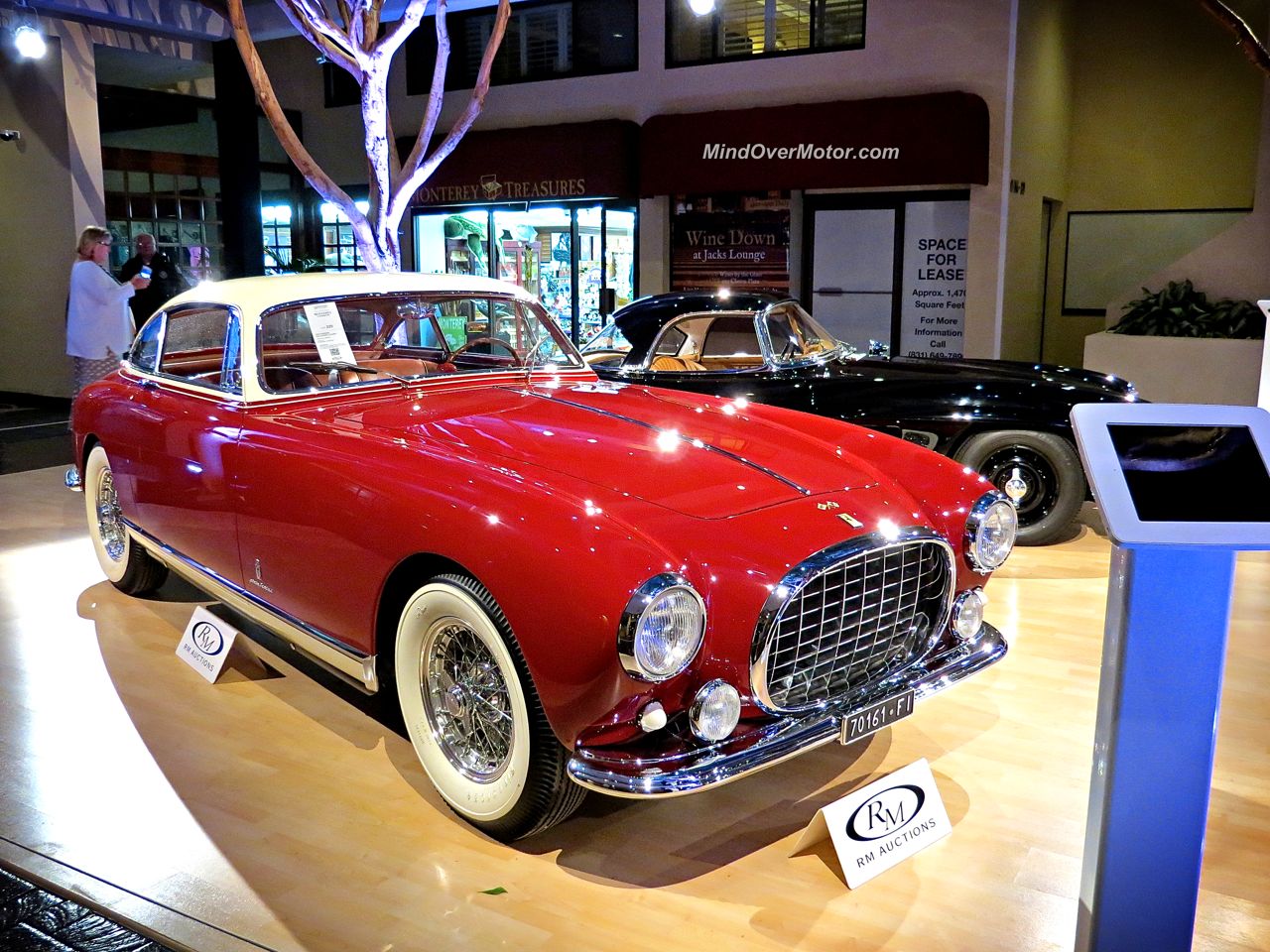 Either way, I think the car market is getting toward the top at this point, so its time to sell if you have a collector car, especially if you shelled out a ton of money for it. The current prices, and economic situation, are simply not sustainable for much longer.

The future is bright, though. I think true competitive capitalism will likely return in the coming years, and it will bring a huge economic boom along with it. The best thing about capitalism is it’s competitive nature, which drives innovation. Oligarchs, on the other hand don’t have and incentive to innovate and grow, they just seek to maintain their place at the top… this is bad for everyone, even themselves.

With a resurgance in competitive capitalism, we will see the auto industry take off in new ways. The market for collector cars will be bigger, but at smaller dollar amounts than it current. What that means is more classic/collector cars will be in demand, and more of them will be preserved.

It will be a very exciting time, so the sooner we break up the oligarchy, the better off we’ll all be, yes, even the wealthy.