Porsche has just announced that all 911 Carrera models will be getting new turbocharged engines. There is much to be happy about here, but as with any change Porsche makes, there will surely be lots to gripe about. My take on this is as follows…

These are some substantial power numbers, especially considering how German companies always seem to underate their numbers on paper by 10-20%. Sure, maybe a Carrera S will make 420hp at high altitude on 91 octane in Denver, but you can bet it’ll be more than that at sea level with better fuel.

What’s more, all of these modern German turbo engines have proven to be absurdly tune-able. I’ll be surprised if the Carrera S won’t see over 500hp with just an ECU reflash. Maybe 450 or so for the Carrera, assuming there are some tangible differences with their turbos, engines, or fuel systems.

What this all means, though, is that we are ushering in an era of monsterously fast Porsche 911s. It should be a lot of fun, and thankfully, Porsche still offers the option of a proper manual gearbox.

The basic pure Porsche 911 is dead, and values of older 911s will increase.

Porsche 911s went water-cooled in 1999, and the values of all prior air-cooled 911s went up. Porsche switched to electric power steering and values of prior 911s with hydraulic power steering went up. In 2012, Porsche announced they will no longer offer a manual 911 GT3 or GT3 RS, and the prices of older manual GT3s/GT3 RSs climbed to surpass the MSRP of a brand new GT3/GT3 RS. There is a clear pattern here.

While Porsche makes changes for certain benefits, the purists of the world will always yearn for the way things used to be. Now Porsche is killing off the simple, basic 911 experience by adding turbos to the mix. Gone will be the days of the howling flat-6 with its linear powerband, replaced by whooshing a popping with tons of torque everywhere in the rev range.

The result will be that values of older 911s with naturally aspirated flat-6s will increase. So buy your late-model 911 ASAP, before it’s too late, though it may already be.

Where Porsche is likely going…

Boxster/Cayman models will have turbocharged flat-4s.

911 models will have twin turbo flat-6s

The naturally aspirated flat-6 will likely live on for a while, but only in GT models like the 911 GT3 and the Cayman GT4.

Is this a good thing?

While there are some things lost with change, I do think this is a good move, overall. I really love driving naturally aspirated Porsche 911s, but there are 50 years worth of them to be found on the secondhand market. If you really lust for that pure 911 experience, then just go buy yourself an older one.

As for the new turbo 911s, the new Carrera S is essentially the same thing as a (996) 911 Turbo/GT2 was about a decade ago. I love the idea that such a wild experience will now be more available.

So far, so good, Porsche. Just please, don’t ever kill the manual transmission, or you will lose me.

2 thoughts on “Porsche Gives All 911s Turbos, What To Make Of This Move” 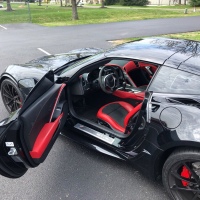