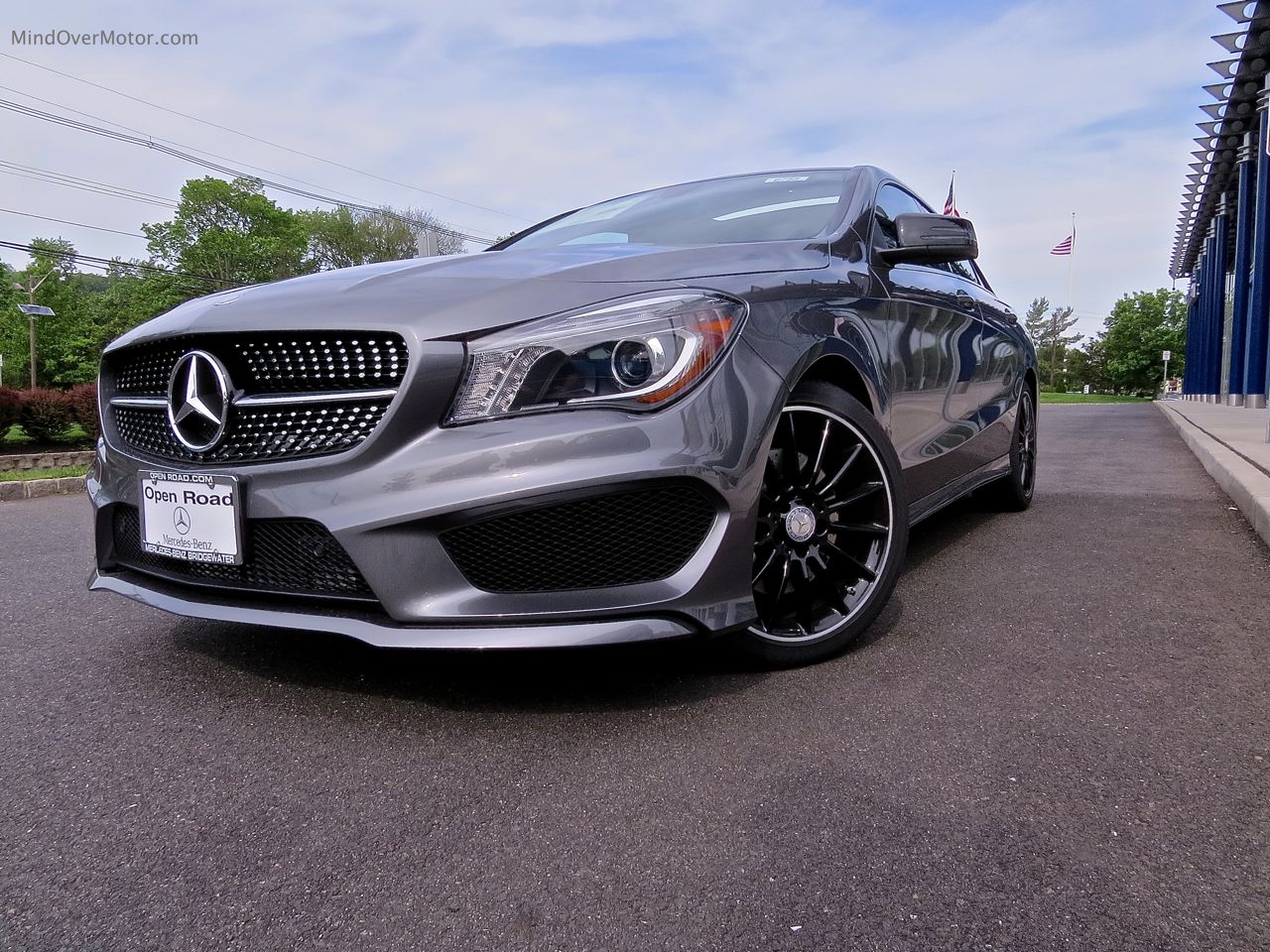 Mercedes-Benz has made a jump into the entry-level luxury market that exists below the C-Class, in order to grab younger, affluent buyers who want to move up in the world from Camrys and Accords that scatter the landscape. As this is the cheapest Benz money can buy new, I felt compelled to drive one, and on Memorial Day Weekend this year, I finally had some time on my hands to go take one for a drive. Luckily for me, my local dealership had a very clean looking AWD example with almost every option available for a spin around the block. As I strapped in, I asked myself one big question: “Can Mercedes-Benz draw as much appeal in this market as they normally do at the top of the market?” I got my answer–and a bit more than that. 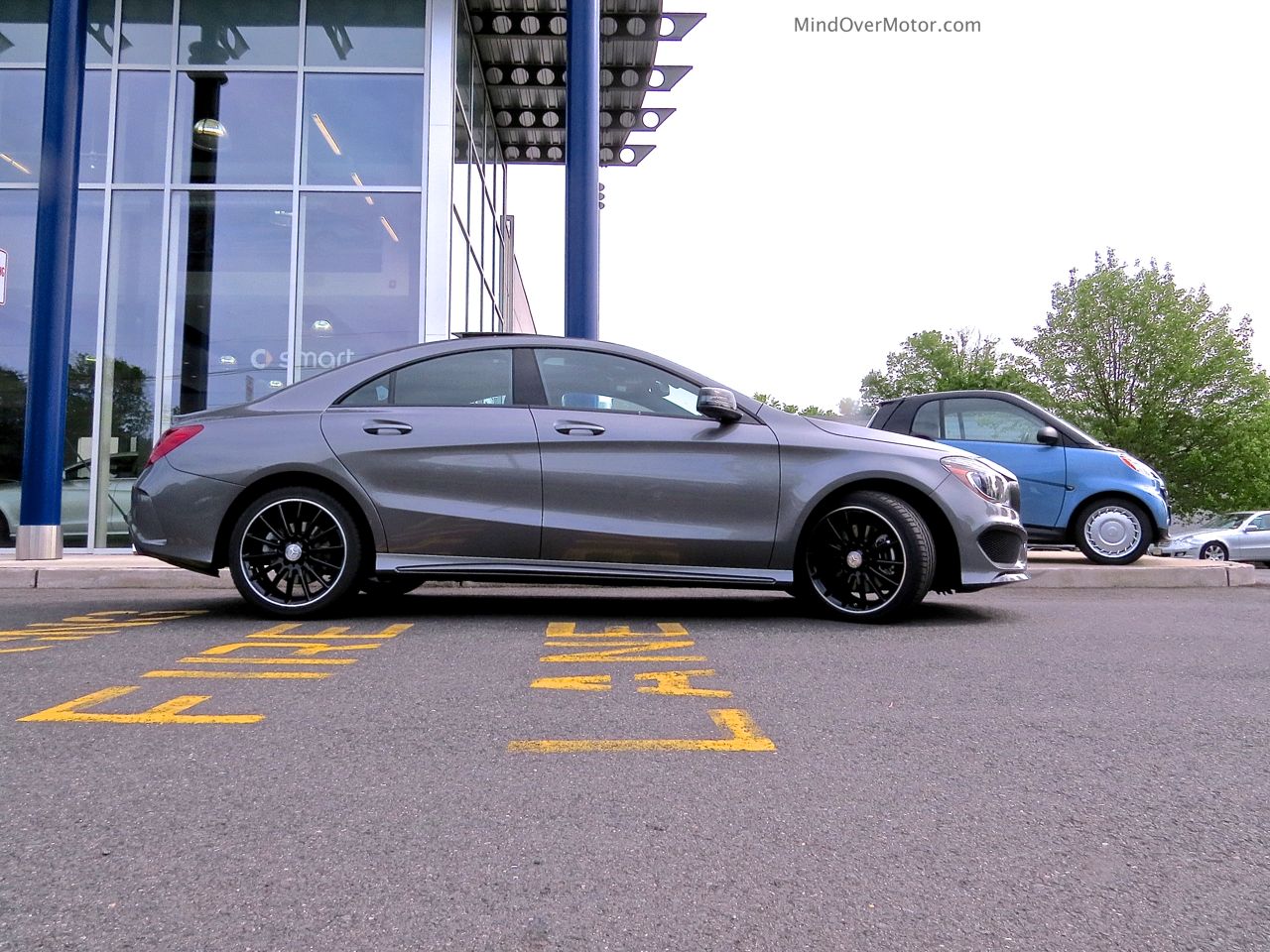 The new CLA is quite an eye-catching little sedan. The front end looks handsome and ultramodern, something I can’t say about Mercedes product a lot of the time. It looks a bit like a futuristic fish when looking directly to the side, but the scalloping in the profile is attractive to the eye. The rear end is a bit funky too–it’s clear Mercedes-Benz wanted to turn heads with this shape on the road, and they’re succeeding. This car, especially with the nice appearance package installed, gets attention everywhere it goes. 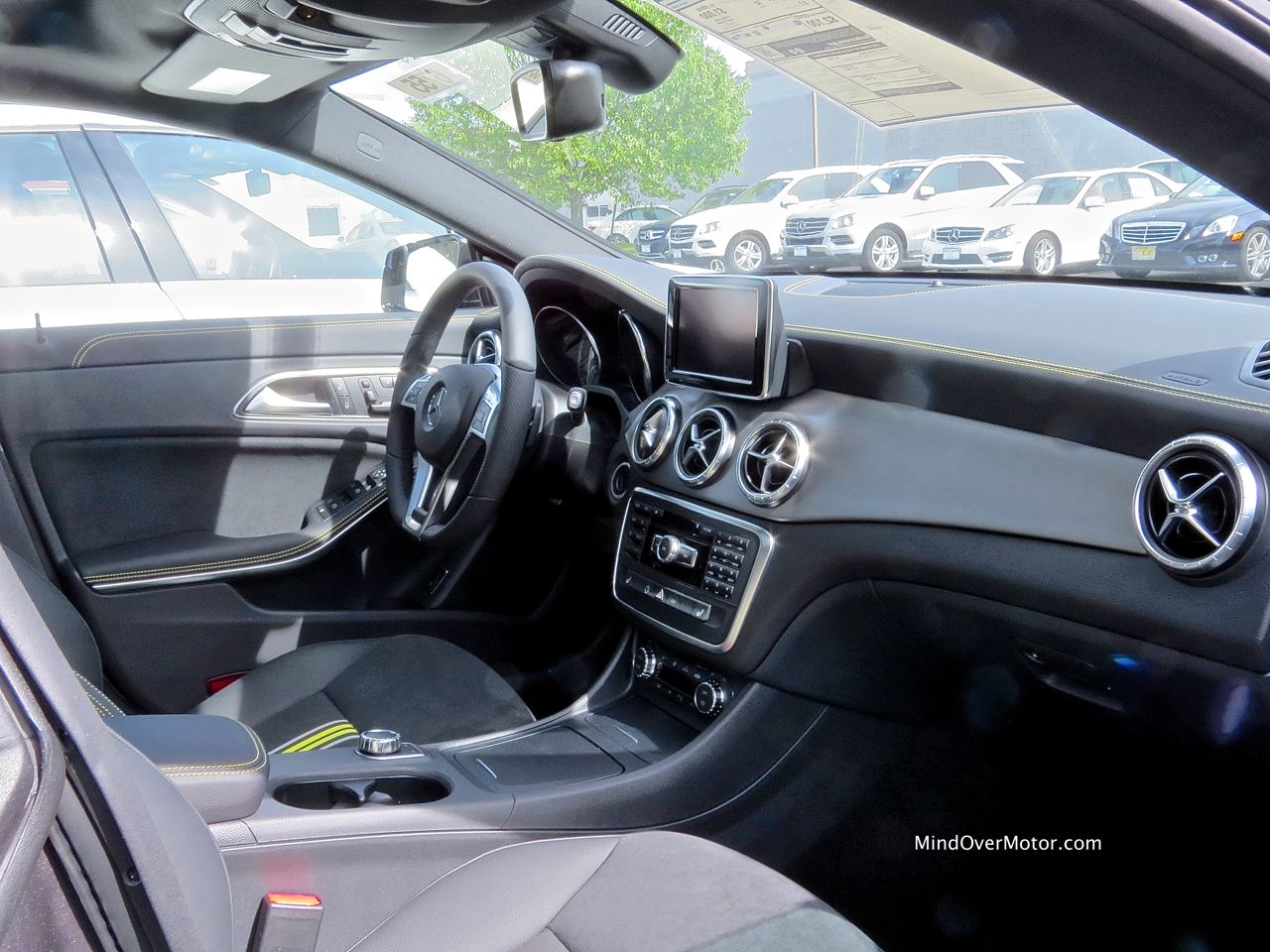 The interior is rather mundane stock but the special package installed on my tester really brought the visuals to the party. The seats, with their yellow striping and Alcantara inserts, lend a far more upscale look to the inside, as does the aluminum-finish dashboard and console trim. The fixed screen in the center of the dashboard is a futuristic touch, as are the embossed leader lines on the outer edges of the vents. The symmetric center stack, underneath the vents, looks smart as well. Mercedes-Benz may be starting this car at a low price, but they aren’t letting the price direct their sense of style–and I like that way of thinking. 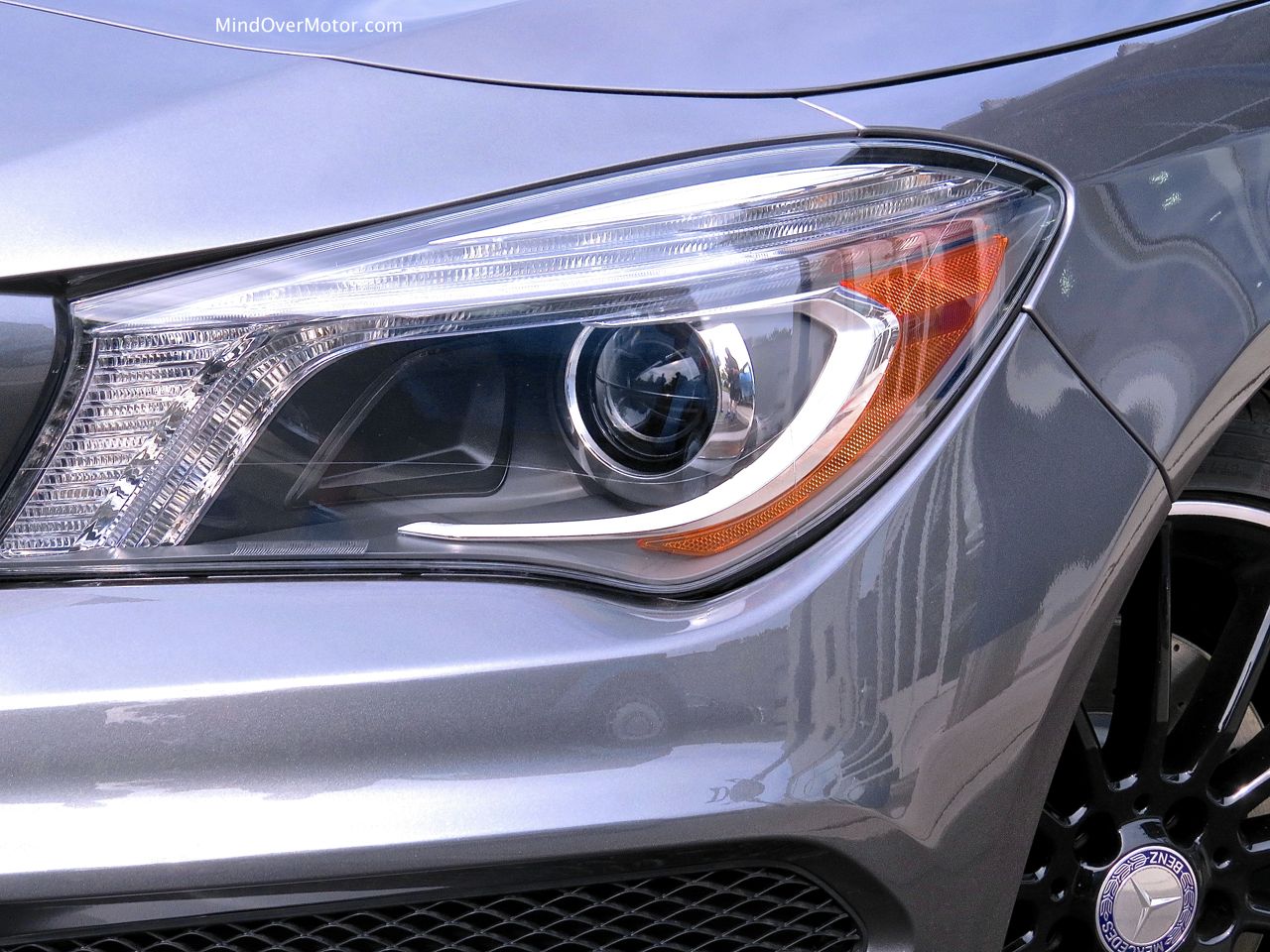 The new CLA is, of course, built like a Benz, despite its baby status. The doors open and shut with a satisfying “clunk” noise, the paint is deep and lustrous, especially this storm grey finish (Mountain Gray, according to M-B). The P88 Edition 1 package, an extra 11 grand, includes some extra body cladding and a set of 18-inch AMG spec alloy wheels, painted in a scintillating black color with trim rings. The taillights are nicely crystallized and the fit is sharp. Shut lines are paper-thin and there’s very little body noise going down the road. 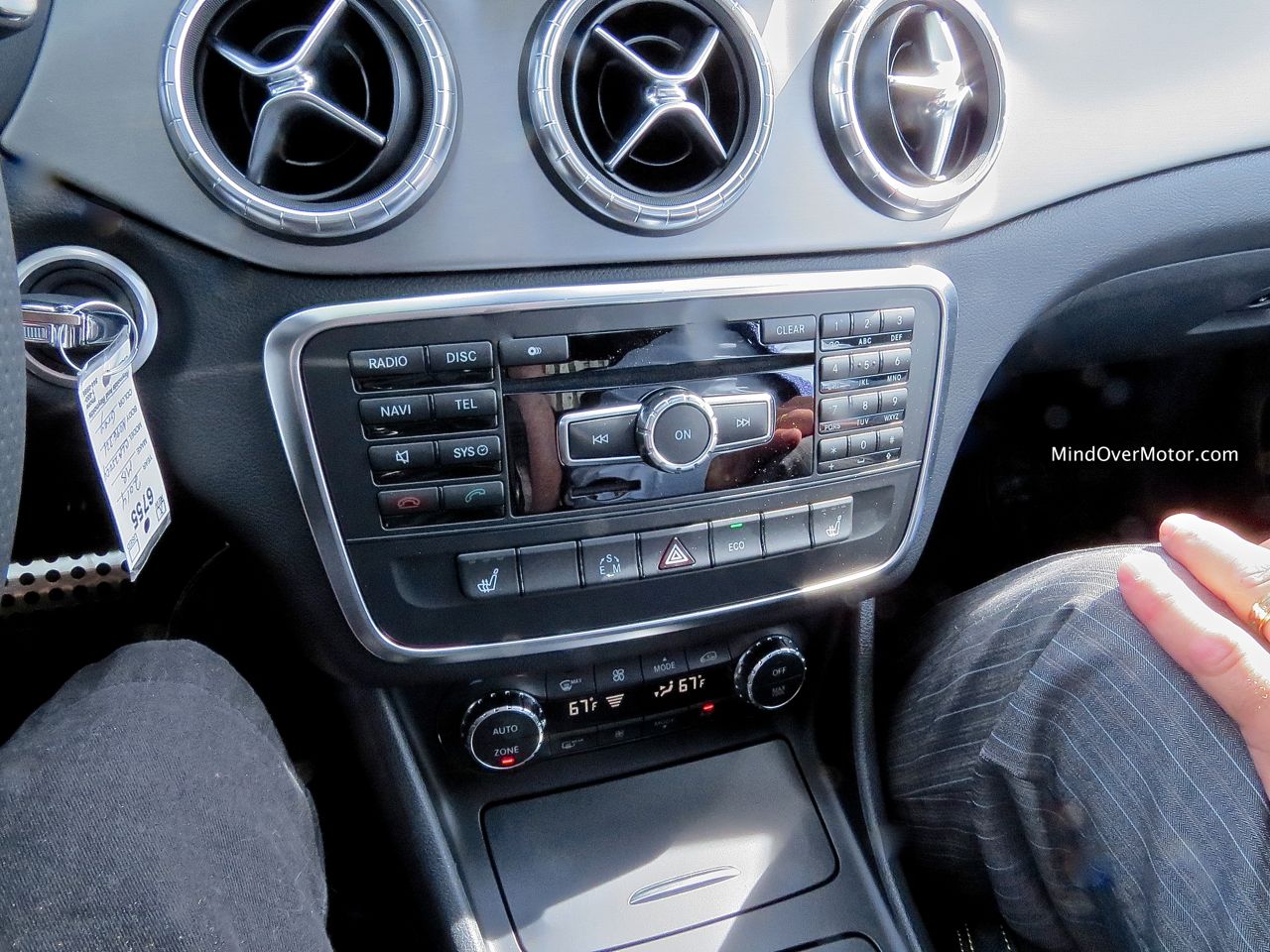 The interior quality is quite good for a car in the 30 grand range. The Edition 1 package in my car includes Alcantara almost everywhere, bringing the feel of the car way up (and the price). The leather feels more refined, more articulate, than a 30 grand Buick or Acura–clearly, Mercedes-Benz is going to woo those buyers away from the Verano and the TSX or cheap TL. The beauty of the dashboard, though, is in its simplicity. The buttons on the center stack are pretty easy to figure out at a glance, but the climate controls are a bit hard to see from the road. Although I prefer my sports sedans with a floor shift, the fact that Mercedes has once again opted to put the shifter on the steering column does free up the center console for the COMAND controller and a nice set of cupholders without being overtly crowded. There’s more storage space too, thanks to the column shift–I’ll have to give up and say that it’s a good idea despite it not being a sporty idea. Other gripes? The rear of the roofline dips back too fast, and can be a real concussion machine when trying to get in the back. I slammed my head against the side of the roof when trying to get in the back to check rear-seat room, so the entry/exit is a bit tricky. 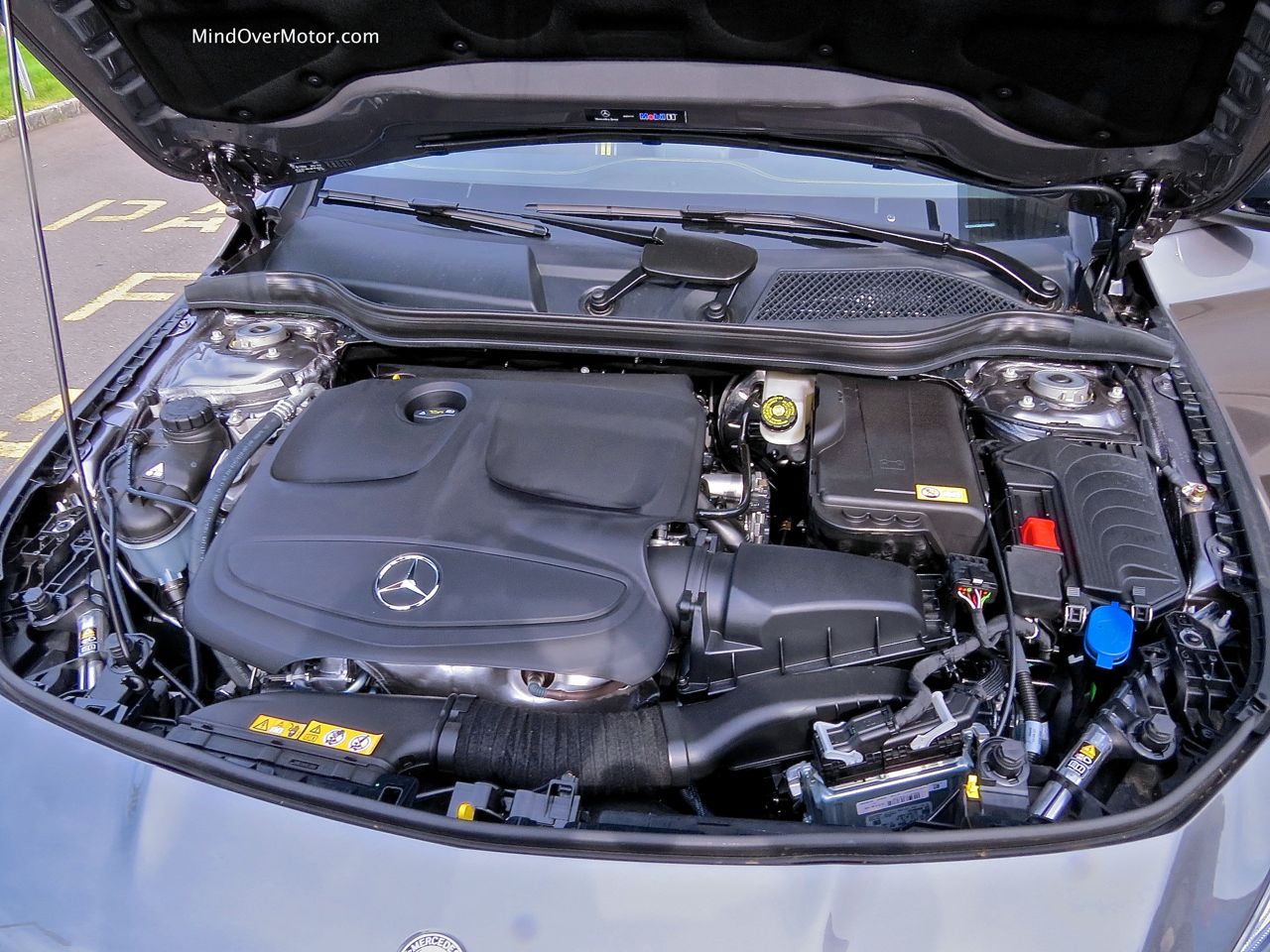 The CLA250 packs a 2.0L inline-four, punching out 208 brake horsepower. It’s not a bad amount of power, but a lot of people will see that and immediately assume it’s not enough. I’m here to say that if that’s you, you are probably wrong. No, you’re wrong. One hit of the gas pedal and it’s clear that even the base engine is just enough for everything. While it’s not big on outright power, the little CLA250 gets up to speed very nicely and the transmission, a 7-speed twin clutch unit, is very smooth and the multiple modes all do their job rather well, even the Sport mode–which holds gears on command. The throttle response is tuned very effectively–the CLA is docile in traffic and when the driver desires a bit of “vroom”, this little Benz responds without asking “Why? I’m a Mercedes. I’m supposed to be driven like an old man.” 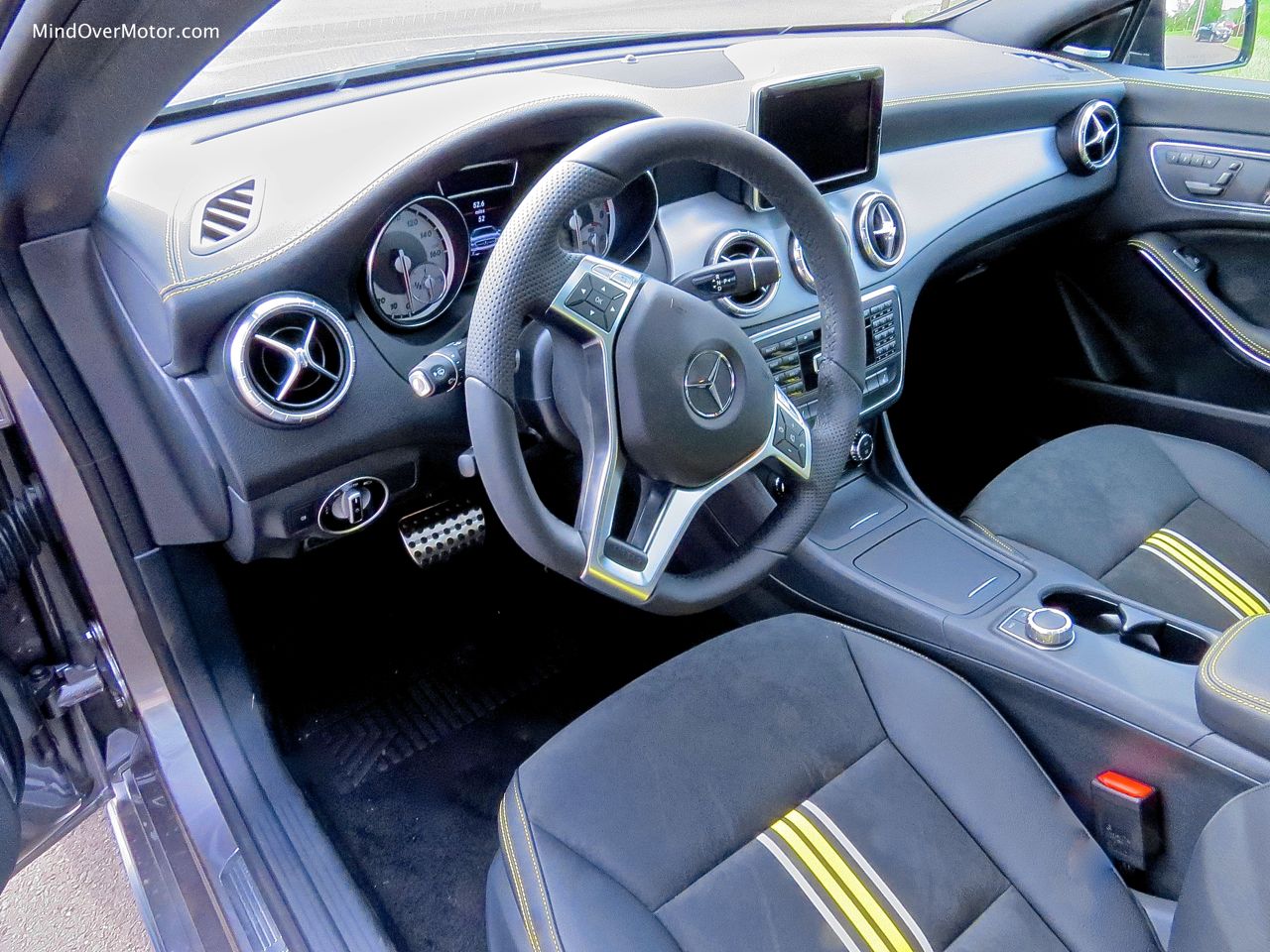 Around corners, the CLA really shines. Mercedes burned the midnight oil to make sure that the CLA won’t handle like an old-school Merc. For however well the CLA250 handles, its hair-raising brother the CLA45 has a great base. The Edition 1 package in my car came with an upgraded sport suspension, high-performance tires, and a set of upgraded cross-drilled brake rotors. All of this comes together to make the CLA250 a very competent little machine. The tires grip well, the suspension allows minimal body lean, and there is some nosedive on the brakes but they feel very strong and there’s little pedal travel. The electric-assist power steering has a bit of a dead-centering issue but it does work accurately. To my surprise, the little CLA rides smoothly and doesn’t crash on the cracks of Route 22. By that rationale, if it can handle Route 22 East, it can certainly handle Manhattan on a bad day. 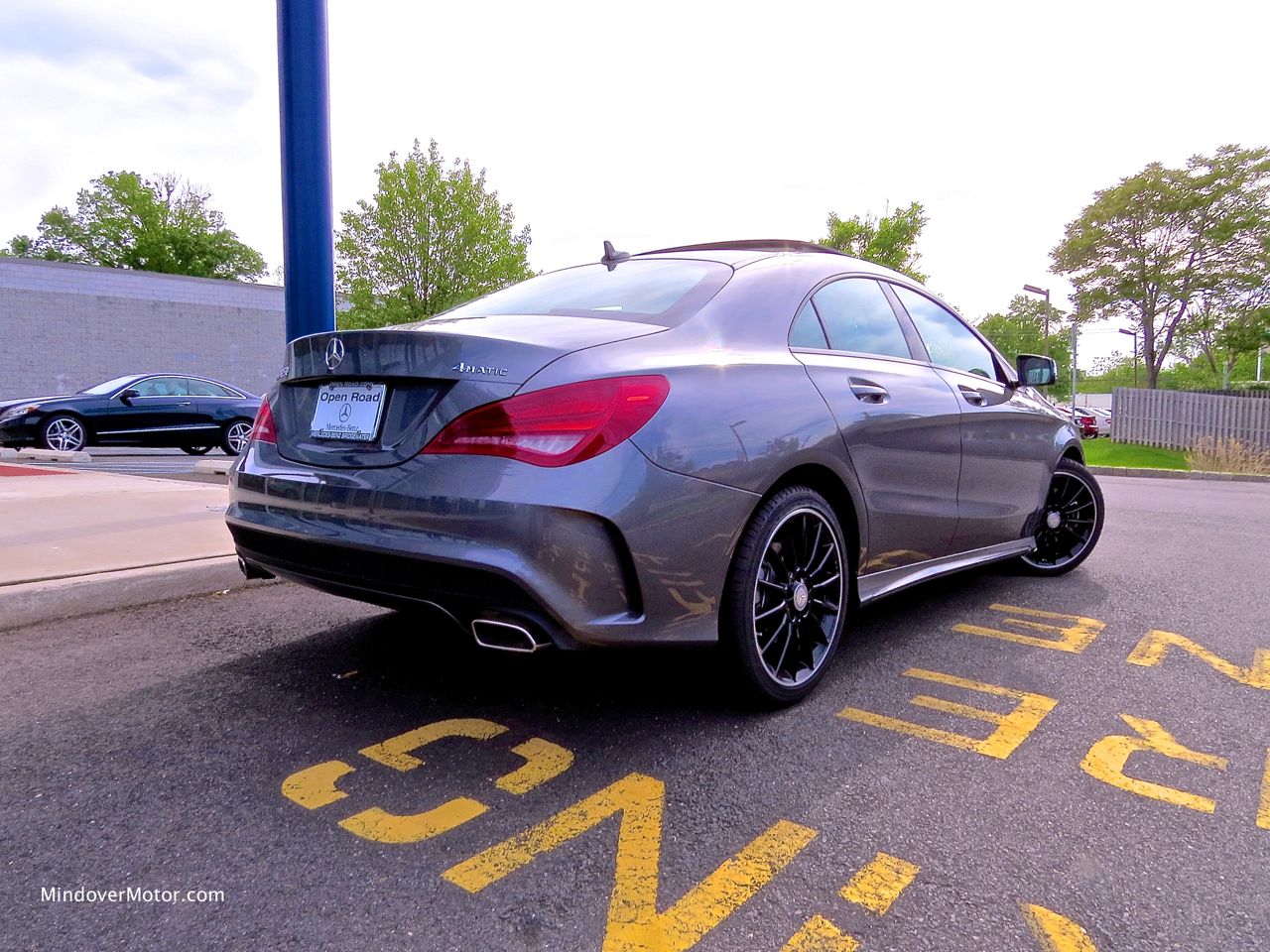 All of this does unfortunately come at a price. While the CLA is a reasonable cost to begin with, my tester was $43,825–a short distance from the CLA45, which is nearly 48 grand. The base model starts at 29 grand or so, which means that the CLA250 I had was a very high-option car. While the base package isn’t available online anymore, optioning it out like my test car does get very expensive. I could probably forgo the COMAND system and the Sports package (if I had to) and bring the price back to about 37 grand, which is far more reasonable for this size of car. At 44 grand, the CLA is not that great a value unless you’re going to splurge and get the AMG for 50 grand–6 grand more is not a lot for more than 100 extra horses and a lot of enhancing looks. 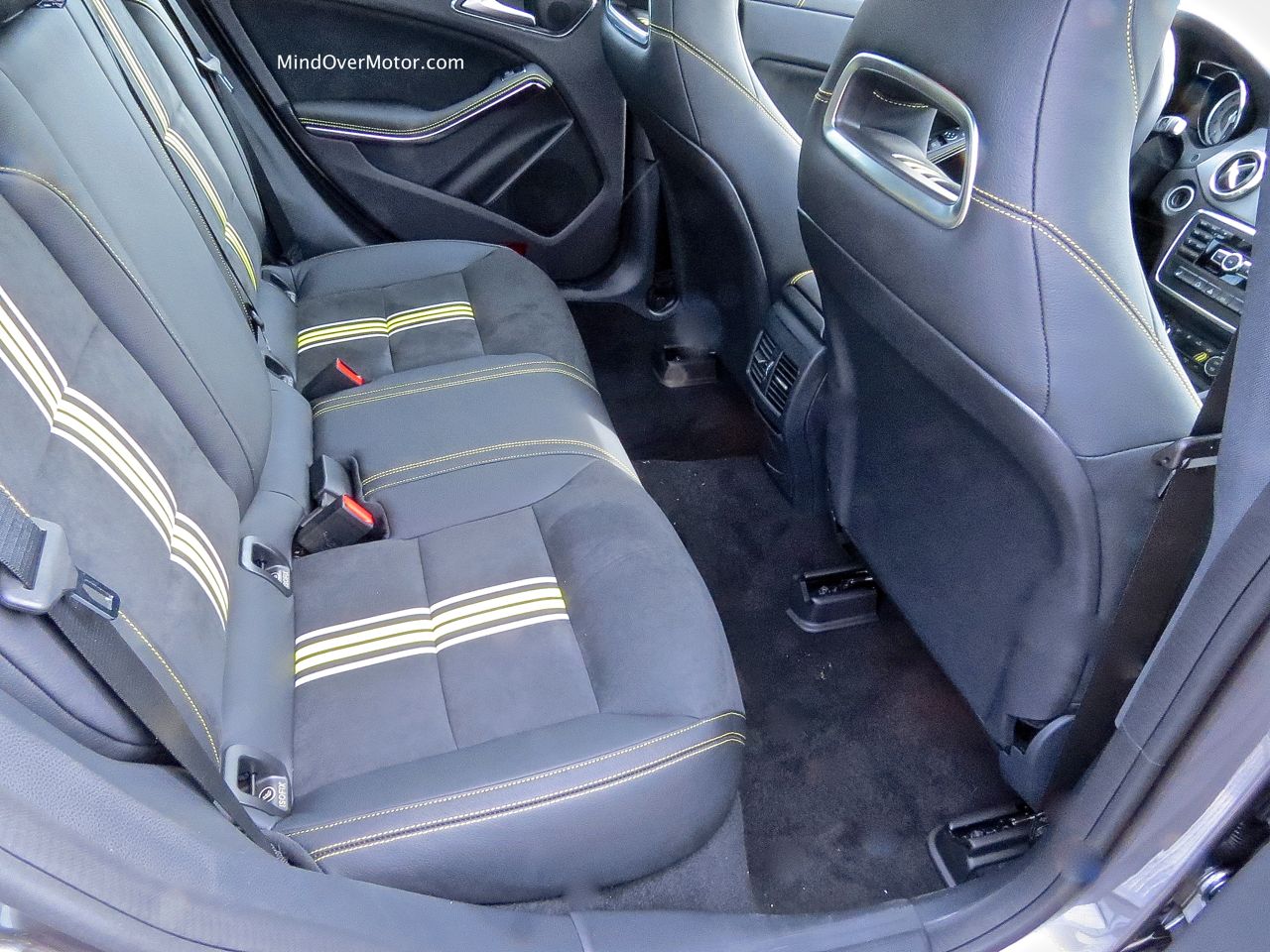 The CLA, if you discount the situation of the price ballooning with a few packages, is a compelling little car. It’s not going to be for everyone–people are still going to default to Acura for a while, but once someone takes a good look at the Mercedes in that price range, with a warranty and no scratches in the paint, they will convert to the land of ze Germans. This is a really fun car to drive, but the rear seat access is genuinely terrible. Visibility isn’t too bad, despite the sharply raked roof–the mirrors help out quite a lot. The options list does somewhat explain the high cost, but Mercedes-Benz should reconsider the cost of those options, maybe just so that the CLA250, when loaded, doesn’t approach the base cost of the AMG version too quickly. 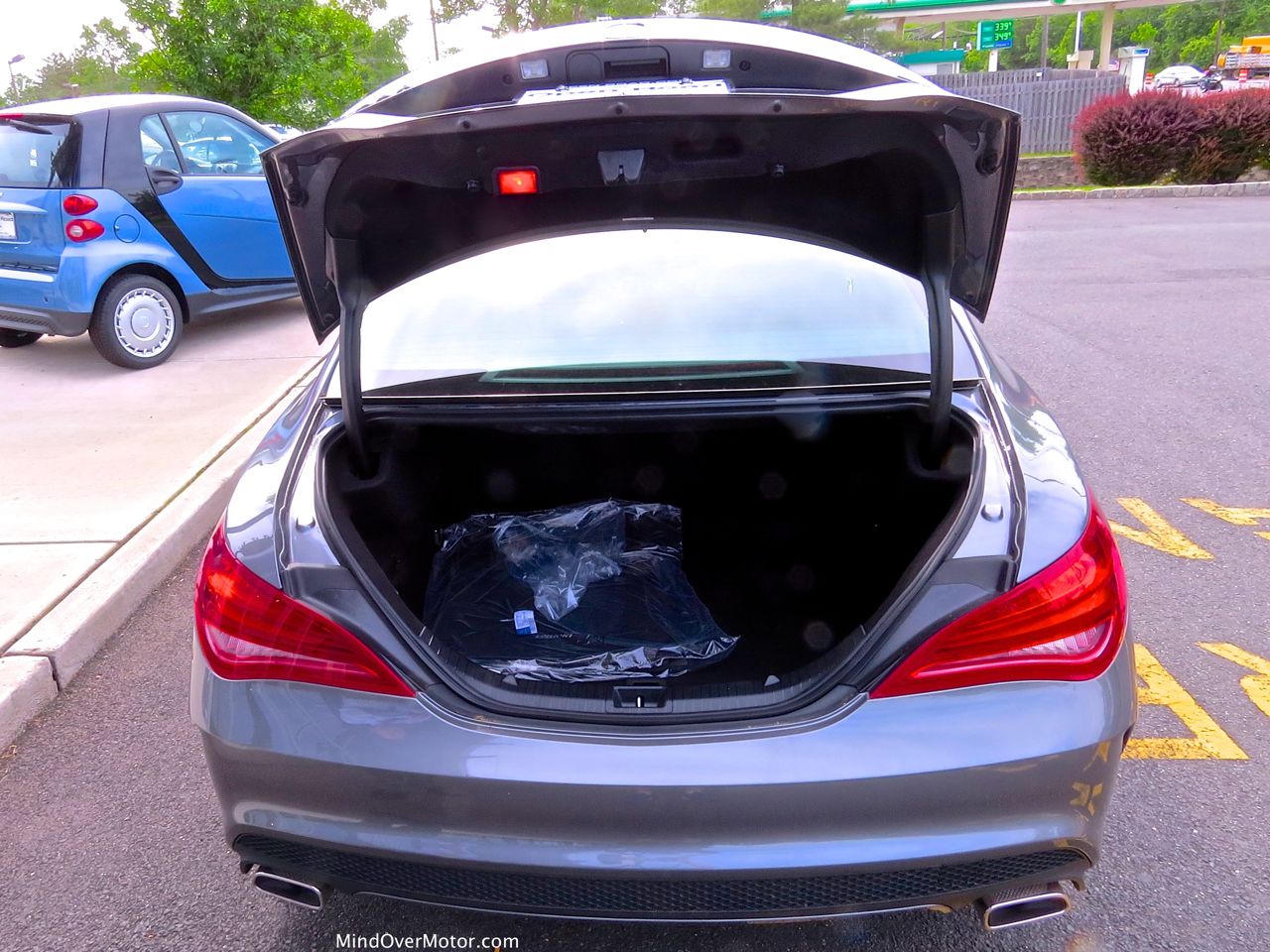 For the faults that it has, the CLA makes an excellent case for itself. Someone just starting out can lease a car like this and probably enjoy it quite a lot, but someone in middle management would enjoy a more expensive version. Despite the lack of a RWD based platform and its diminutive size, I like this more than the C-Class because it’s a younger-looking car with more appeal across multiple segments. It’s classy, sophisticated, and sporting, yet doesn’t look overly mature. The ad campaign for this car did in fact sum it up perfectly–it’s a scintillating little Mercedes for a bit over 30 grand with a few options, something that hasn’t existed in some time. You don’t have to sell your soul to the devil to have one–and that alone is a great thing. In all, it’s difficult to find a reason to stay away from the CLA. Buy one new now, or get one on the excellent Mercedes-Benz CPO program two years from now, and it will still be a strong automotive decision. 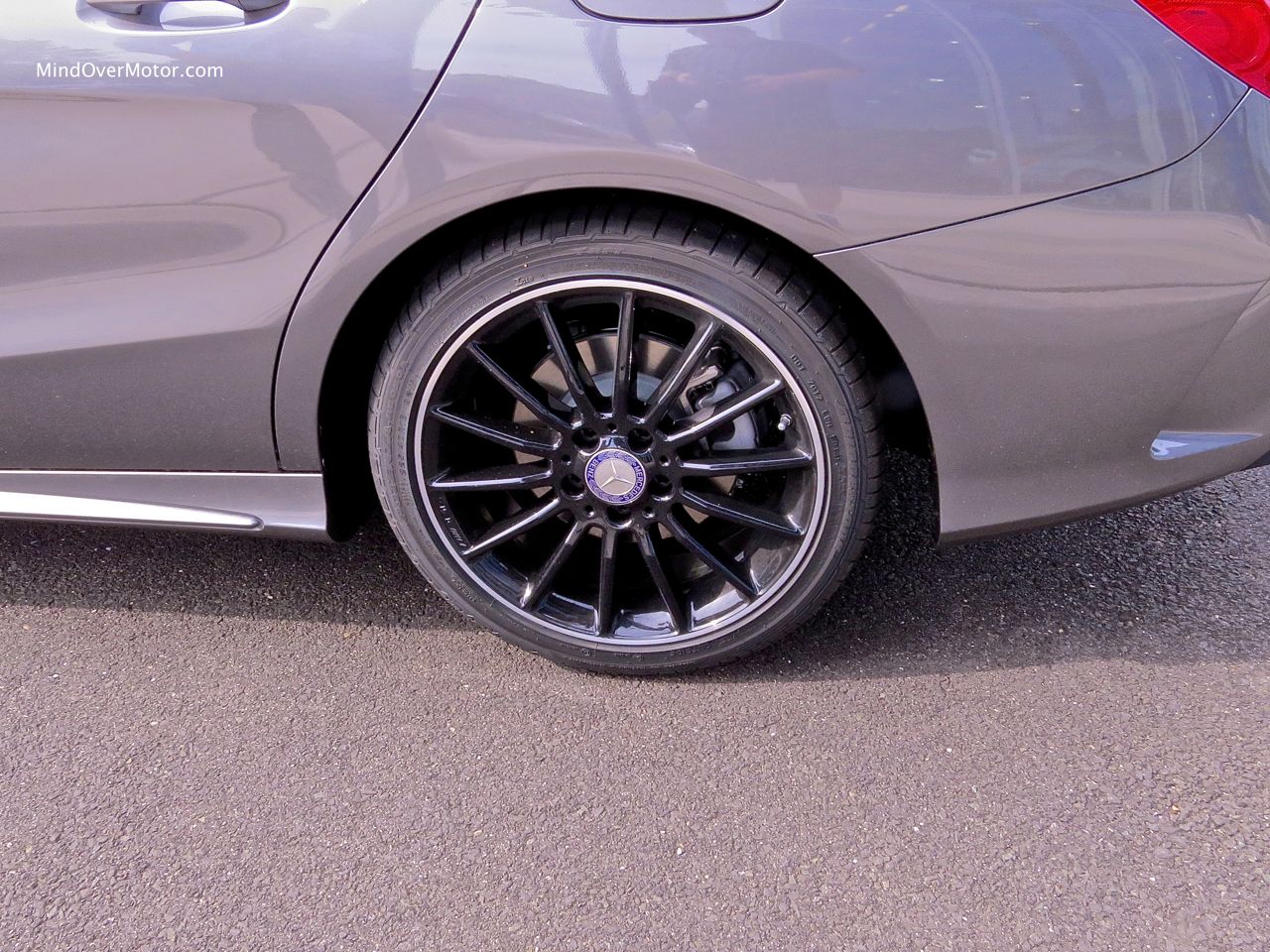 I would like to personally thank Open Road Mercedes-Benz of Bridgewater, New Jersey for allowing me to use this CLA 250 4Matic for my review of the CLA. I’ll be sure to come back again soon–this is an excellent dealership with a massive inventory and a well-supported AMG department. I spoke to Keith Rasmussen, who was happy to show me the technology behind the new S63 AMG sedan, which is also simply astounding.