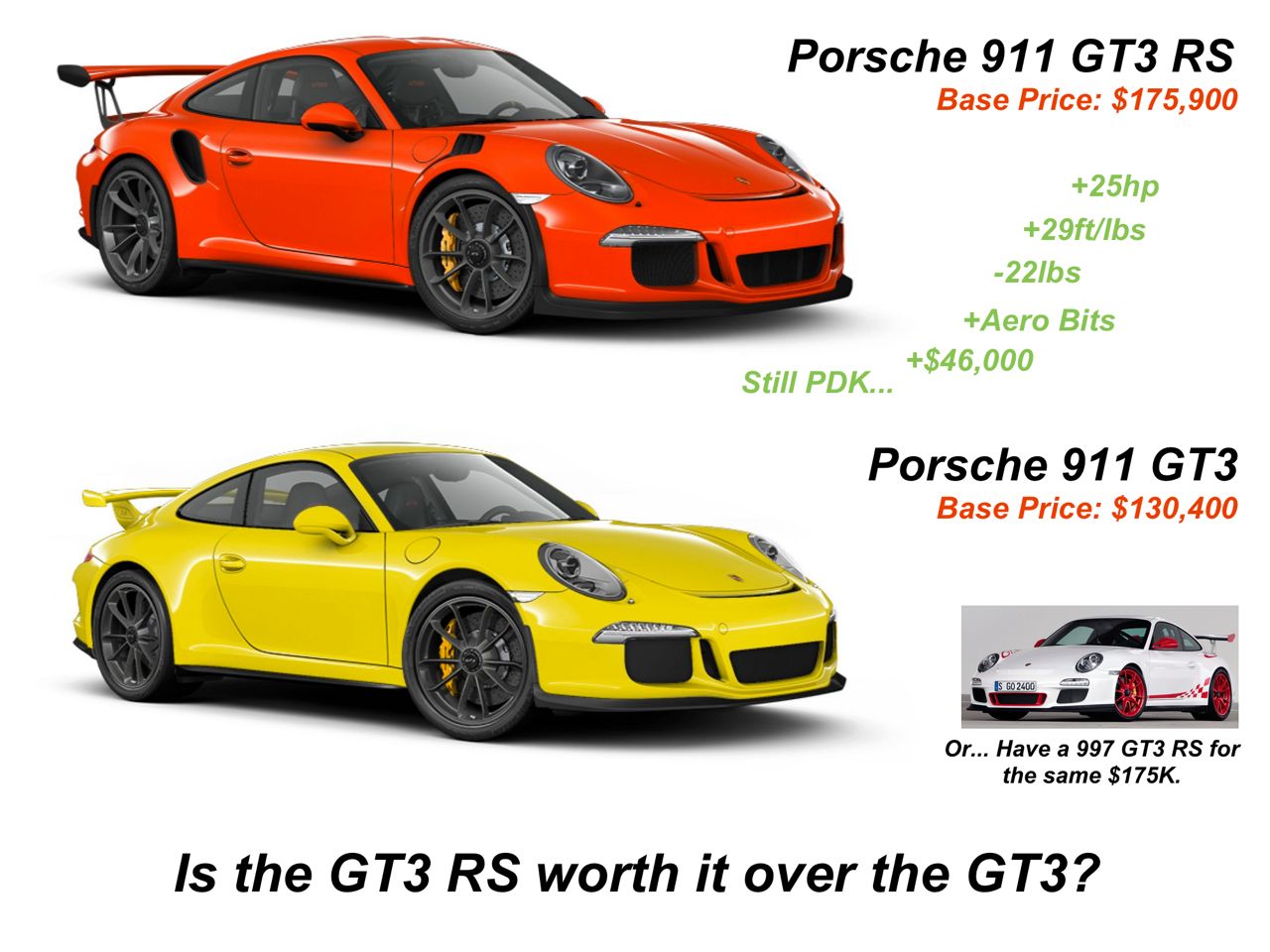 The new Porsche 911 (991) GT3 RS officially dropped at the Geneva Motor Show this week after much anticipation. As you might expect, many in the automotive journalism world sound 100% excited about this new “raw” 911. I am not someone who merely reports the figures, though, anyone can do that. I do this blog so that I can offer up my genuine honest opinion on cars and the auto industry. And, frankly, as cool as the new GT3 RS is, I feel a bit let down by Porsche. Here’s why…

Like the standard GT3, the GT3 RS only comes equipped with the PDK paddle shift gearbox. PDK is probably the best paddle shift tranny on the market, but it still takes a lot of the desirability out of a car like a GT3 RS for me.

Porsche’s competition, Ferrari and Lamborghini, each offered both manual and auto-manual paddle shift options on their cars for ten years before they decided to ditch stick shifts. That is because they actually saw less and less customers buy manuals with every new model that came out. Ferrari and Lamborghini had very clear evidence from their markets that paddle shift was what they wanted.

Porsche, on the other hand, didn’t even release their auto-manual paddle shift, PDK, until 2009. It replaced their “Tiptronic” automatic, which was not enthusiast oriented at all. Within a year of releasing PDK, Porsche released the 997 Turbo S without the option of a manual… having less than a single year of market observation.  No you can’t buy a manual 911 Turbo or GT3 model of any sort…. and who asked them to do that? I’m not necessarily saying PDK isn’t in demand, I’m saying Porsche couldn’t possibly know given the information they’ve had.

Frankly, Porsche has just forced PDK on their customers without due cause to do so. Porsche customers are generally more purist-oriented than Ferrari and Lamborghini customers, and I think Porsche has made a terrible mistake by ditching their manual gearboxes. The current 991 GT3 and GT3 RS would’ve been the perfect models to get a clear answer from customers on what they want. Porsche should be offering both manual and PDK options on all of their sports cars, and comparing the actual sales numbers. (It is also a mistake to assume that a Carrera buyer and a GT3 buyer are similar in taste)

So, the GT3 RS is supposed to be the most hardcore driver’s 911, it is supposed to be an expert-level thrill ride. The new one just doesn’t hold up to that, though. It comes fitted with every luxury feature available in the standard 911, and now that it’s PDK only, Paris Hilton could comfortably take it shopping in tall heels. This is not what a hardcore performance car is supposed to be, I’m sorry.

While the older 997 GT3 RS’s did come with many luxury features, they at least had the manual gearbox to serve as a barrier between serious drivers and red carpet poseurs. That’s gone now, and that is why the values of all late-model manual GT3 and GT3 RS have been skyrocketing in the last few years.

Look, I’m sure the new GT3 RS will be “the fastest 911 ever” around a race track… until the next generation comes out and beats it. But where is the lasting appeal?

Ten years from now the modern state-of-the-art PDK gearbox will feel clunky and outdated. It won’t be the fastest anymore, and all that will matter is the “fun factor” to secondhand buyers. Long term, the PDK gearbox will detract from the car’s appeal, whereas a well-executed manual gearbox will always be fun for drivers. That is why the older manual GT3s and RSs will continue to climb in value, and why the values of these new paddle shift-only cars will most likely drop like a rock after the next generation comes out.

A similar situation can be seen right now with Ferrari 360s. Manual 360s are appreciating in value, whereas paddle shift 360s continue to drop.

I think Porsche has lost their way somewhat with their road cars, I really do. They seem to have forgotten that a sports car is something that people enjoy on their day off. Fun is the real point of a car like this, whether the owner is out driving on the street or attending a track day event. A manual gearbox requires more activity from the driver, offering a genuine connection between you and the machine. Lap times be damned, rowing your own gears will ALWAYS be more fun.

Let any driving enthusiasts drive this new PDK GT3 RS back to back with the previous manual 997 GT3 RS 4.0, and I promise you that they will all prefer the older car with the stick shift. Backing up my point here, values of 997 RS 4.0s are currently around $300,000.

Just imagine what the demand would’ve been like had Porsche offered a manual GT3 RS. Rich people would’ve been piling over one another to place an order, especially with the standard GT3 as PDK only. But as things are, I don’t see any real reason to spend the extra $46,000 to have the RS over the standard GT3. Sure, the RS will be faster, and maybe those two letters will add inches to your manhood at a Porsche Club Meet. But from behind the wheel, I just don’t see the cars being all that different, certainly not $46,000 worth at all. 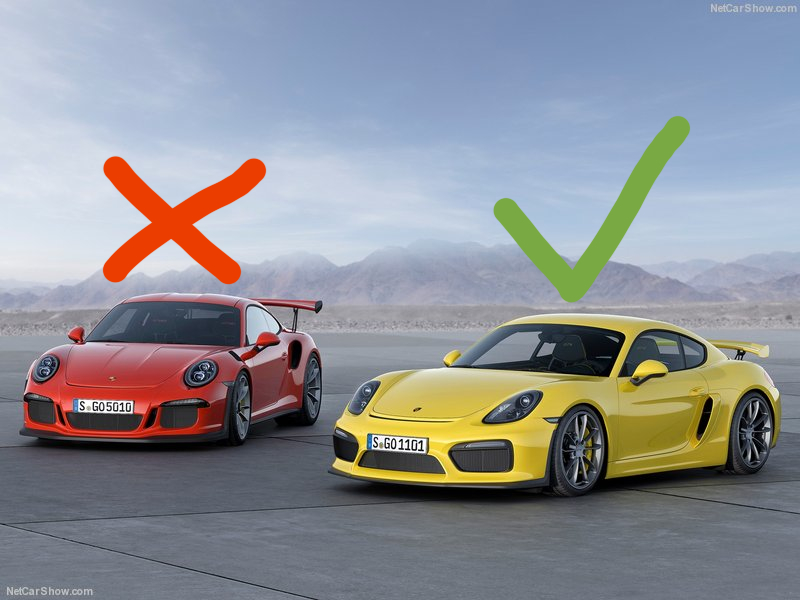 Honestly, I still like the new Porsche Cayman GT4 better than both of these 911 GT3 models. And yes, it entirely because of the manual gearbox in the Cayman. In 10 years the Cayman GT4 will be just as enjoyable as it is today, whereas both 911 GT3s will feel like clunky dinosaurs.

That said, if you do have the $200,000 budget to afford the new GT3 RS, you would be A LOT smarted to put that money into a previous-gen 997 GT3 RS. Simply put, you will most likely make money on it. Porsche seems to love the idea of making everything PDK. As they continue to do so, the great 911s of old will continue to be coveted by the real driving enthusiasts out there, thus commanding higher and higher prices. It’s simple supply and demand economics.
As for the new GT3 RS. It looks cool, and I’m sure it’ll be fast and lots of fun here in 2015. But I really don’t think it will have the same long-term appeal of previous-gen GT3s. So buyer beware.