In another serious gem of a video by Petrolicious, we are taken back to the 1955 Mille Miglia with non other than Sir Stirling Moss himself, who won the race with his Mercedes-Benz 300 SLR #722.

This was really the golden era of racing when everything was still allowed to be excessively dangerous. The Mille Miglia, a one thousand mile race on the public streets of Italy, was probably the most notorious race of the age. Moss finished the race in just 10 hours and 7 minutes setting the all time record for the race, which has never been beaten.

You have to understand the context to appreciate the enormity of his achievement, and to appreciate just how awesome a car the Mercedes 300 SLR is, even by modern standards. Officially, the roads were all closed, but Italy being Italy, that meant absolutely nothing. So it was basically a 1000 mile sanctioned street race, dodging trucks and much slower pedestrian traffic. The speeds were also no joke either, 150-160mph was routinely reached by Moss in his SLR, and he even talks about getting airborne at those speeds. Also keep in mind that this was all back in the mid 1950s with tire and braking technology from the era. Most modern cars, with modern technology, cannot stop or maneuver well at 160mph, but the 300 SLR could do it back then… at least well enough that it is still in one piece.

Enjoy this video. Moss is one of the most legendary drivers of all time, and the 300 SLR is probably the most epic car Mercedes-Benz has ever made. 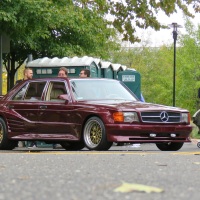