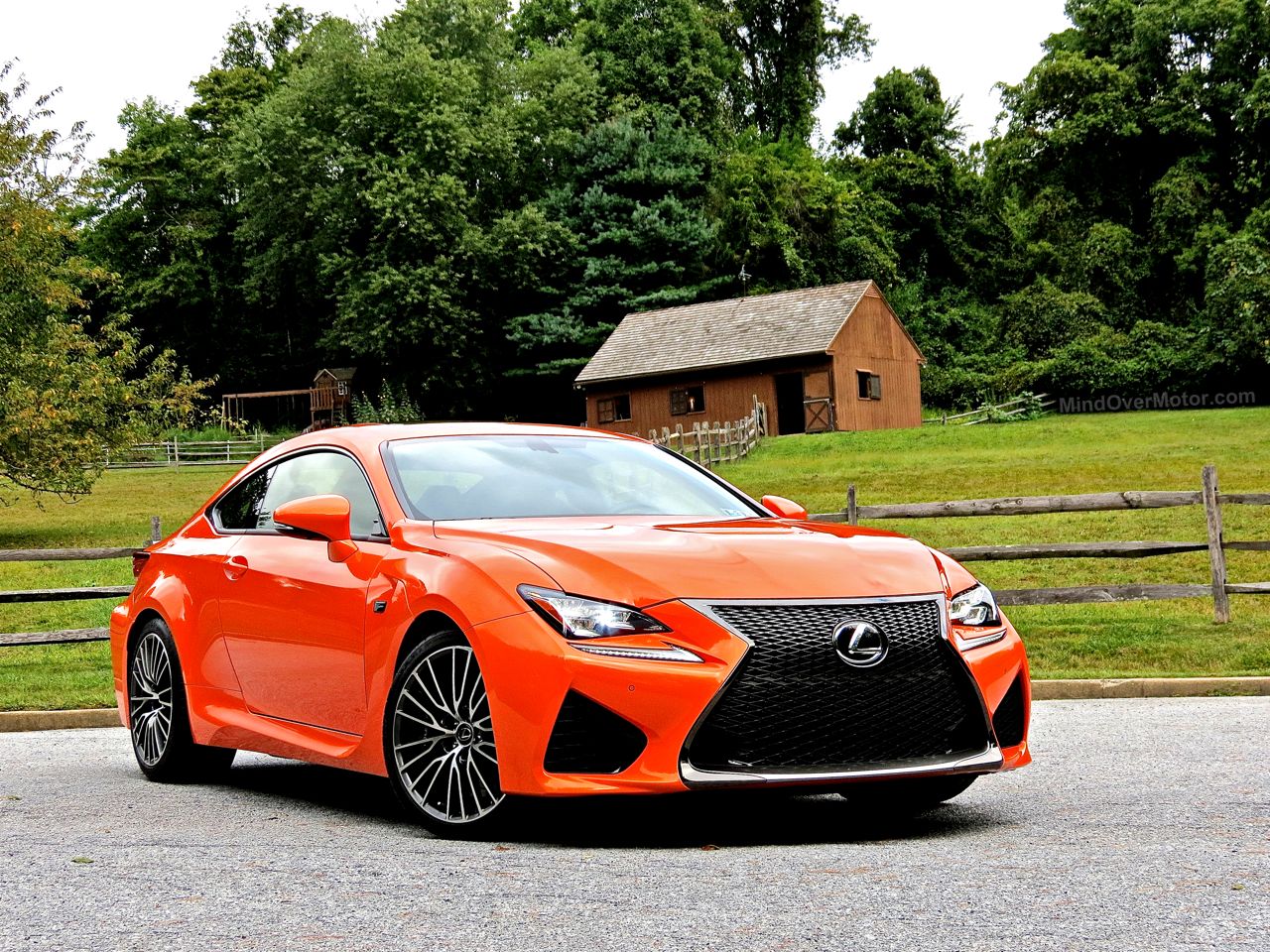 $75,000 will buy you a hell of a lot of car. For those looking for a posh grand touring coupe, options will include Aston Martins, Maseratis and Bentleys, in addition to your more run-of-the-mill German luxury sleds. There are a lot of fine cars to choose from.

But now I’m going to tell you why you should consider forgoing all of the above, and write the big check out to your local Lexus dealership instead. The Molten Pearl Orange car you see here is the Lexus RC-F, and it may well be the best grand touring coupe available on a $75,000 budget.

A grand touring car is mainly about three things, style, speed and comfort. But the RC-F brings even more to the table, and it winds up making a hell of a lot of sense to any thinking buyer. 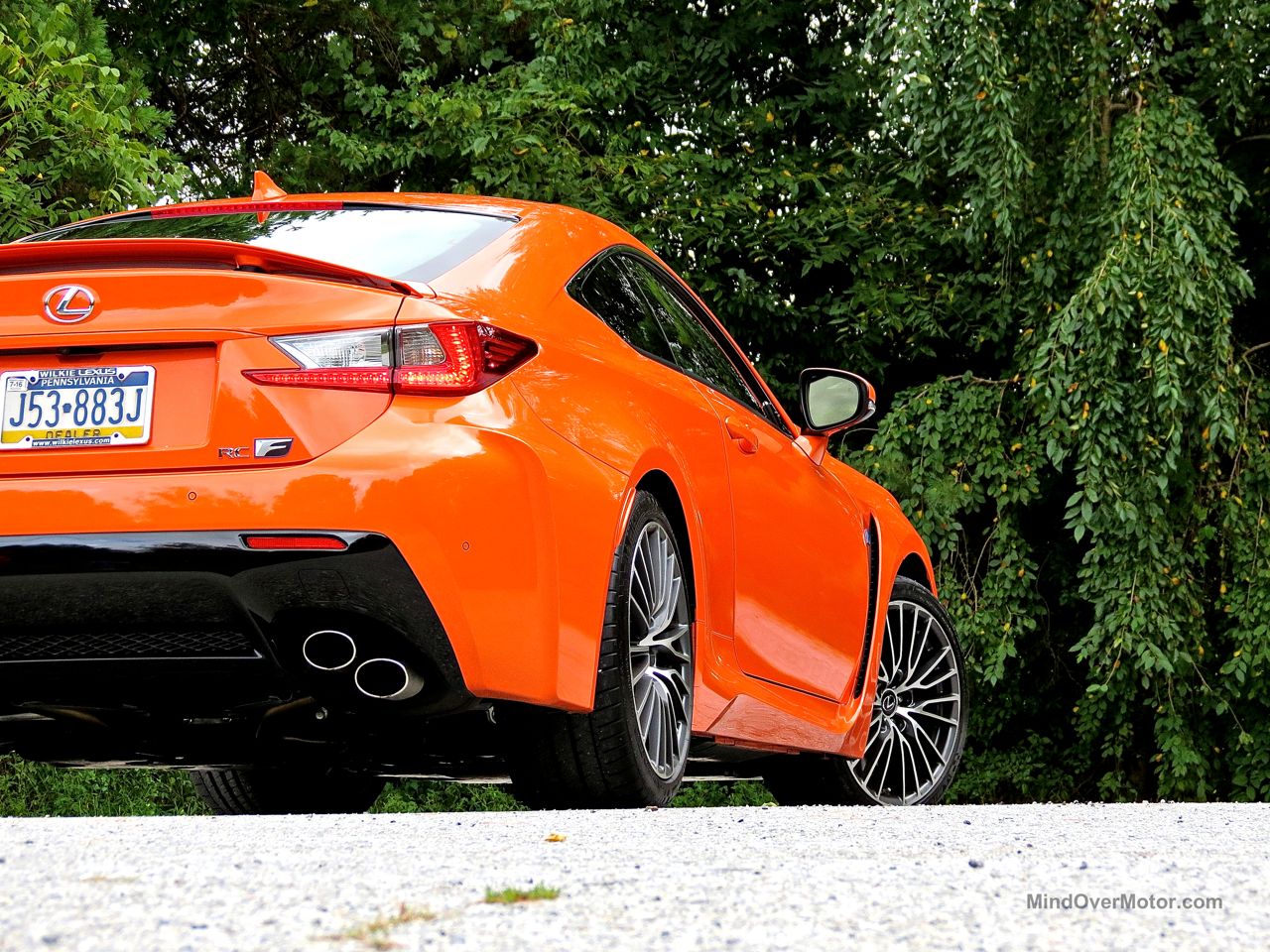 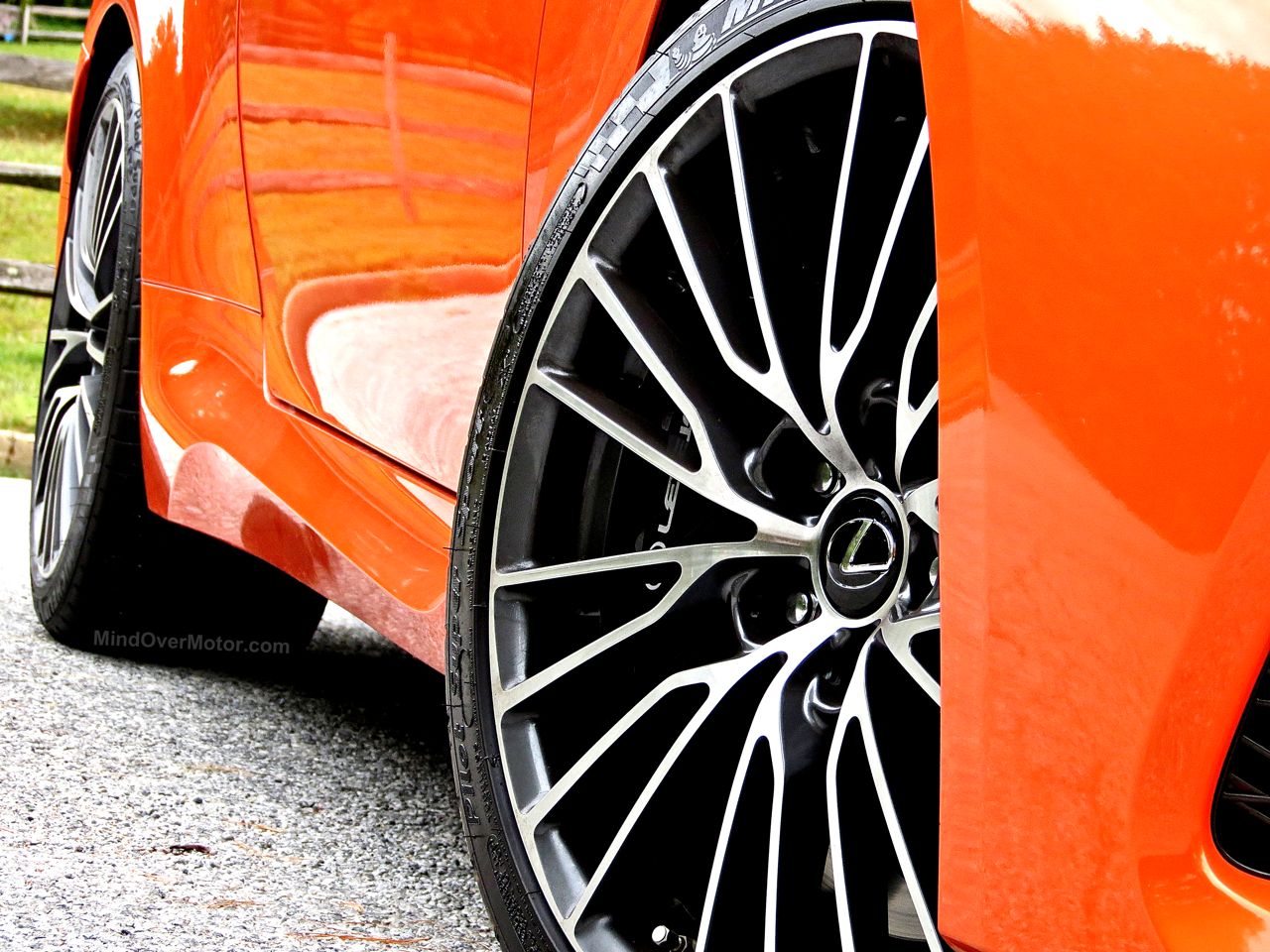 Wait, isn’t this supposed to compete with the BMW M4 and Cadillac ATS-V?

Yes, in many regards it does. But the RC-F has a different sort of character about it.

The BMW and the Cadillac are very much sports cars at heart. While the RC-F has a lot of sporting elements, it feels more varied in its focus. It’s quite a bit heavier than the BMW and Caddy, certainly not a nimble handler to the same degree. But that solid, heavy feel in the RC-F, mixed with its dynamic ambidexterity, gives it the unmistakeable flavor of a grand touring car. That is why I am framing it as such, and it seems to make a lot more sense when looked at through the grand touring lens. 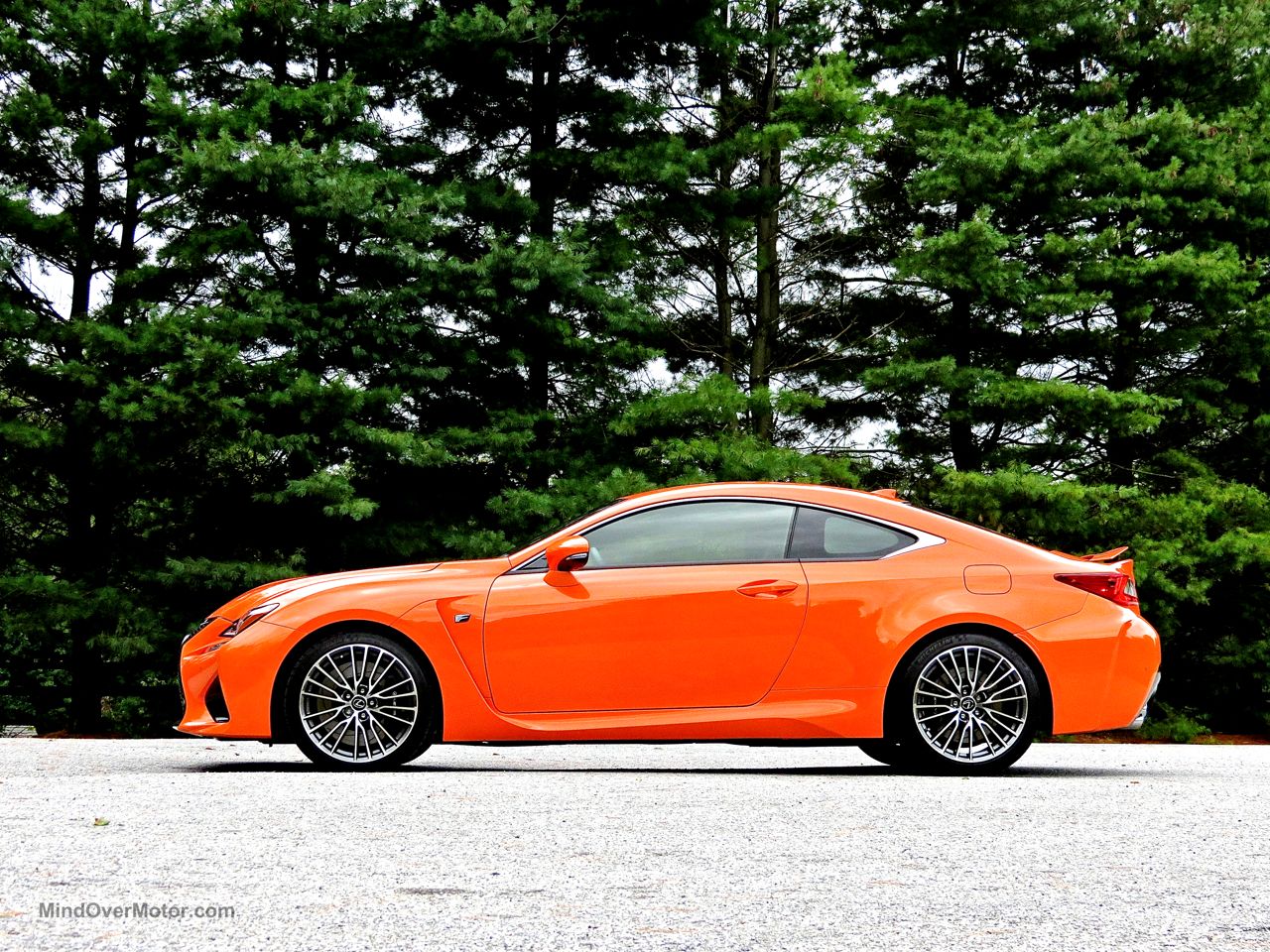 The RC doesn’t directly share the same platform as a sedan, unlike the BMW and Cadillac, which do. It’s platform is a mut of the Lexus range, with the front end from the GS, the middle from the old IS convertible, and the rear end from the current IS. So the RC is not merely an IS coupe.

I think Lexus has done a phenomenal job with the shape and styling of the RC. Even the non-F models are head-turners. It is a very distinctive coupe, especially this bright orange RC-F with its extra aggressive styling.

Sure, it may not quite match up with the style of a Maserati GranTurismo or an Aston Martin DB9, but it’s more appealing than a Mercedes CL, Bentley GT, or a BMW M6. And the RC-F definitely out-does the BMW M4 and Cadillac ATS-V in terms of its curb appeal.

Even without the orange paint, the RC-F looks quite striking, and it’s definitely a complete 180 from where Lexus was 10 years ago. If you still consider this a librarian’s car, then your librarian must kick some serious ass. 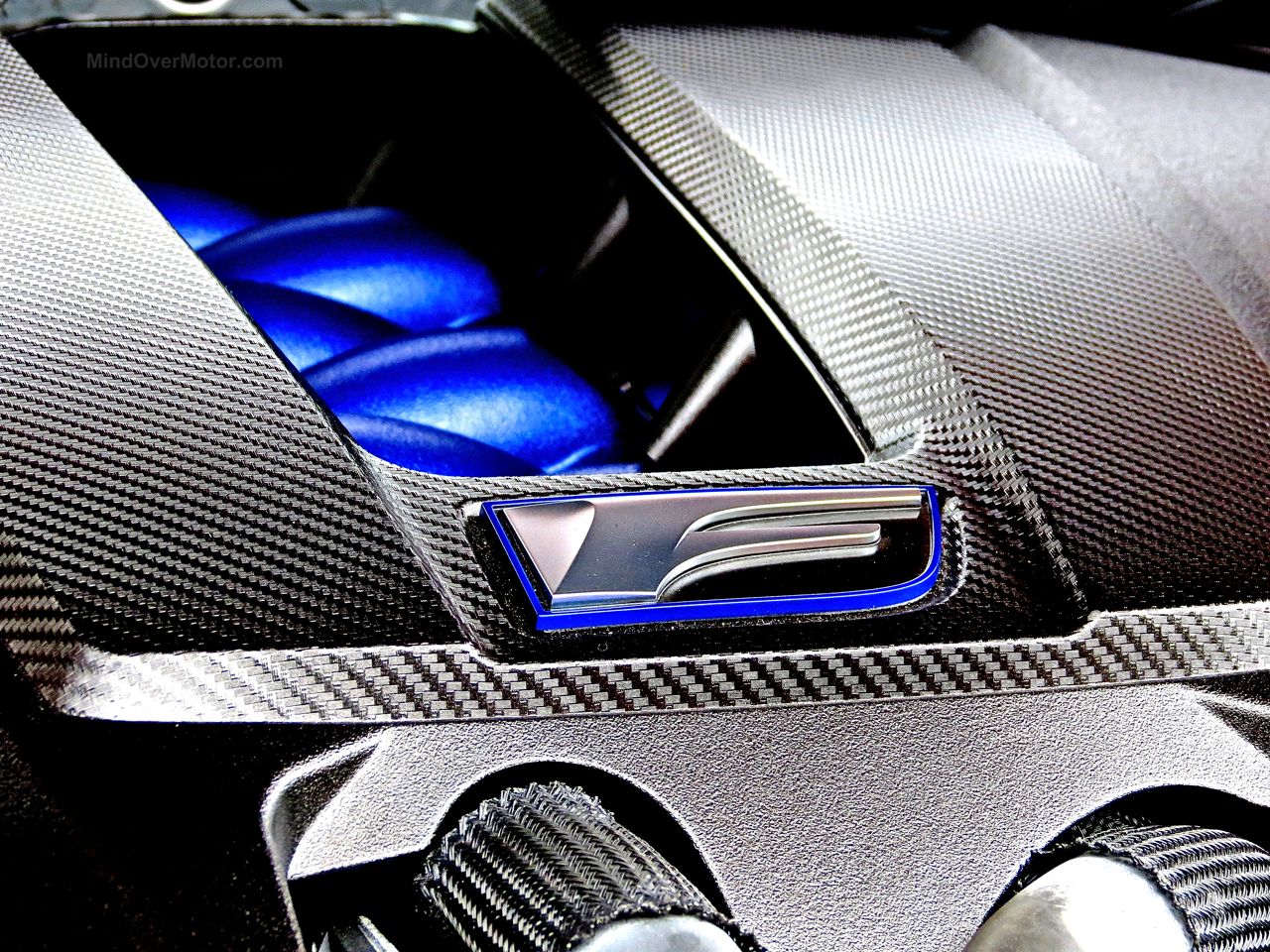 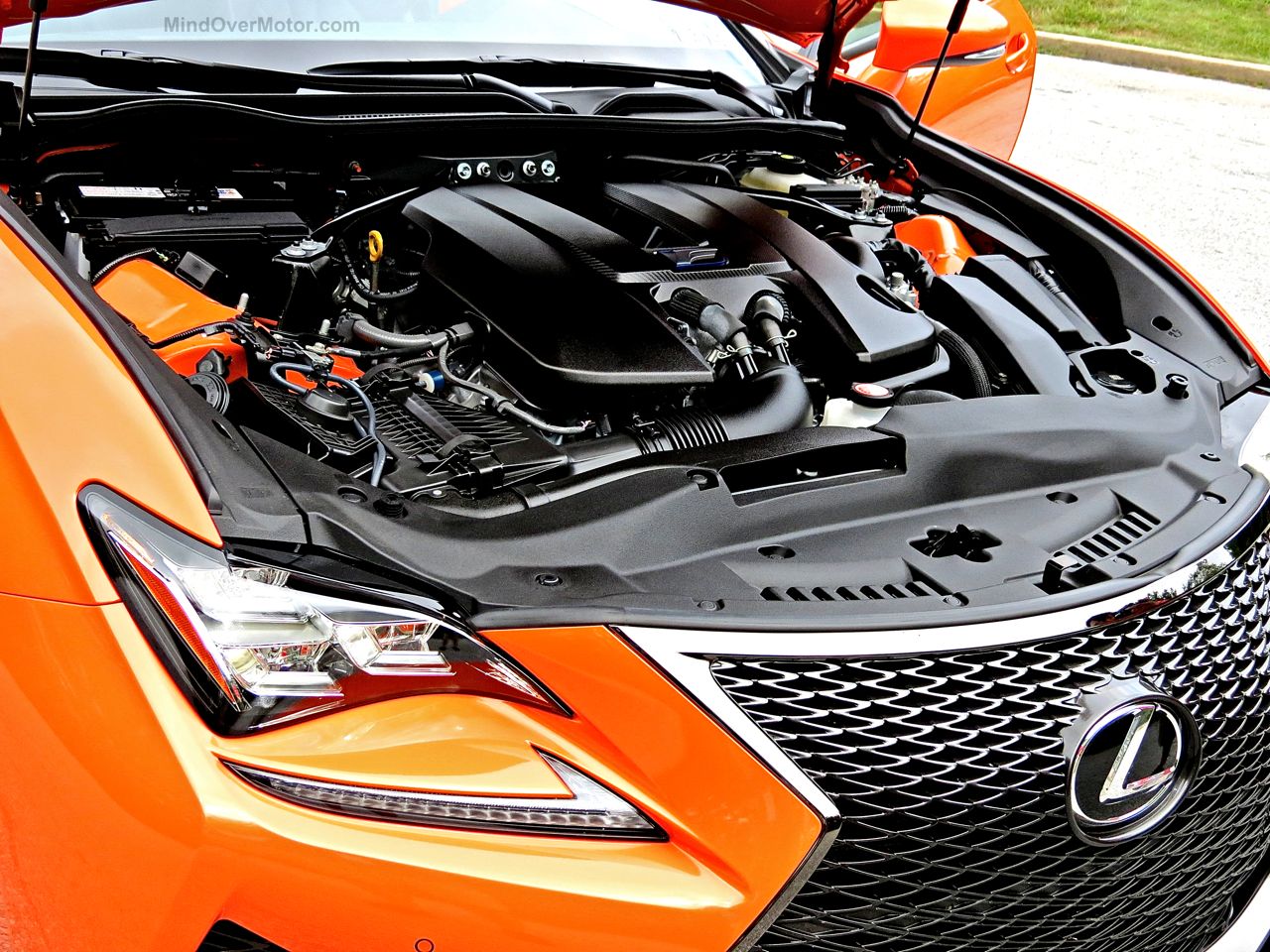 When I said the RC-F wasn’t as focused on being a sports car as some of its competitors, I did not mean to suggest it was lacking in speed, performance or excitement in any larger sense. Sure, side-by-side with the lighter ATS-V and M4 the Lexus may not come out in front, but it’s still absolutely still in the same league.

My real point is that the RC-F is not a “numbers car”, and it shouldn’t be done the disservice of being judged soley as such.   That said, it’s atmospheric 5.0L V8 makes 467hp at 7,100 RPM, and it does so with a pleasing amount of aural drama. 0-60 comes in around 4.4 seconds, the 1/4 mile is dispatched in the mid-12s, and its top speed is governed to just under 170mph. In short, it’s plenty fast enough to have a lot of fun with, and I never cared that other cars were faster while I was driving it.

What you can’t see on paper is the solid feeling the RC-F exudes when attacking some curvy roads. It weighs a little over two tons, but it’s center of gravity feels low and extremely stable. This thing soaks up bumps and dips at high speed very well. I’ve heard mixed things about it’s on-limit performance at the racetrack, but on the street the RC-F is able to keep quite a fast pace with ease. If you ask me, it’s definitely a road car in purpose, so its performance on real imperfect pavement is really what matters. 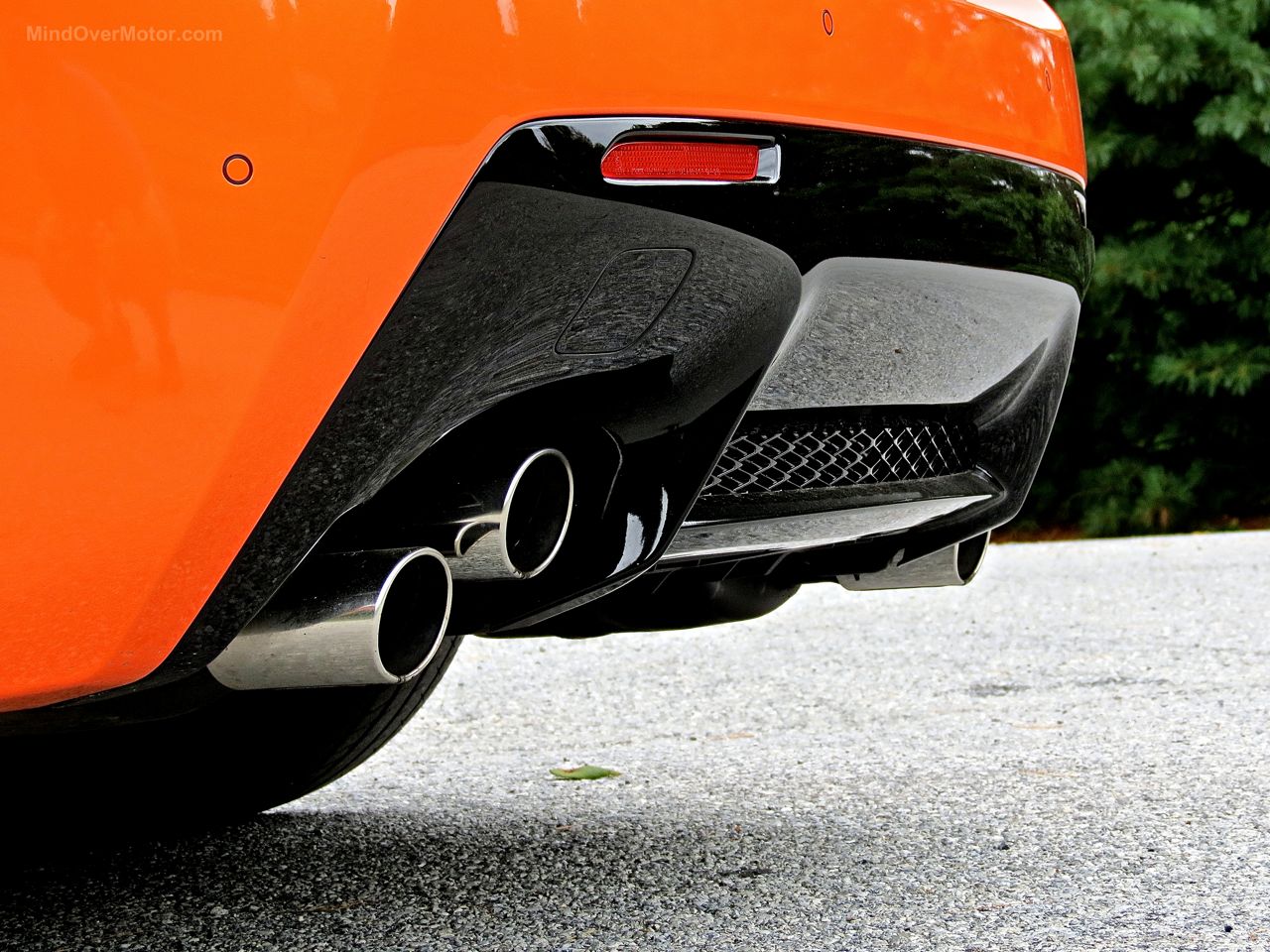 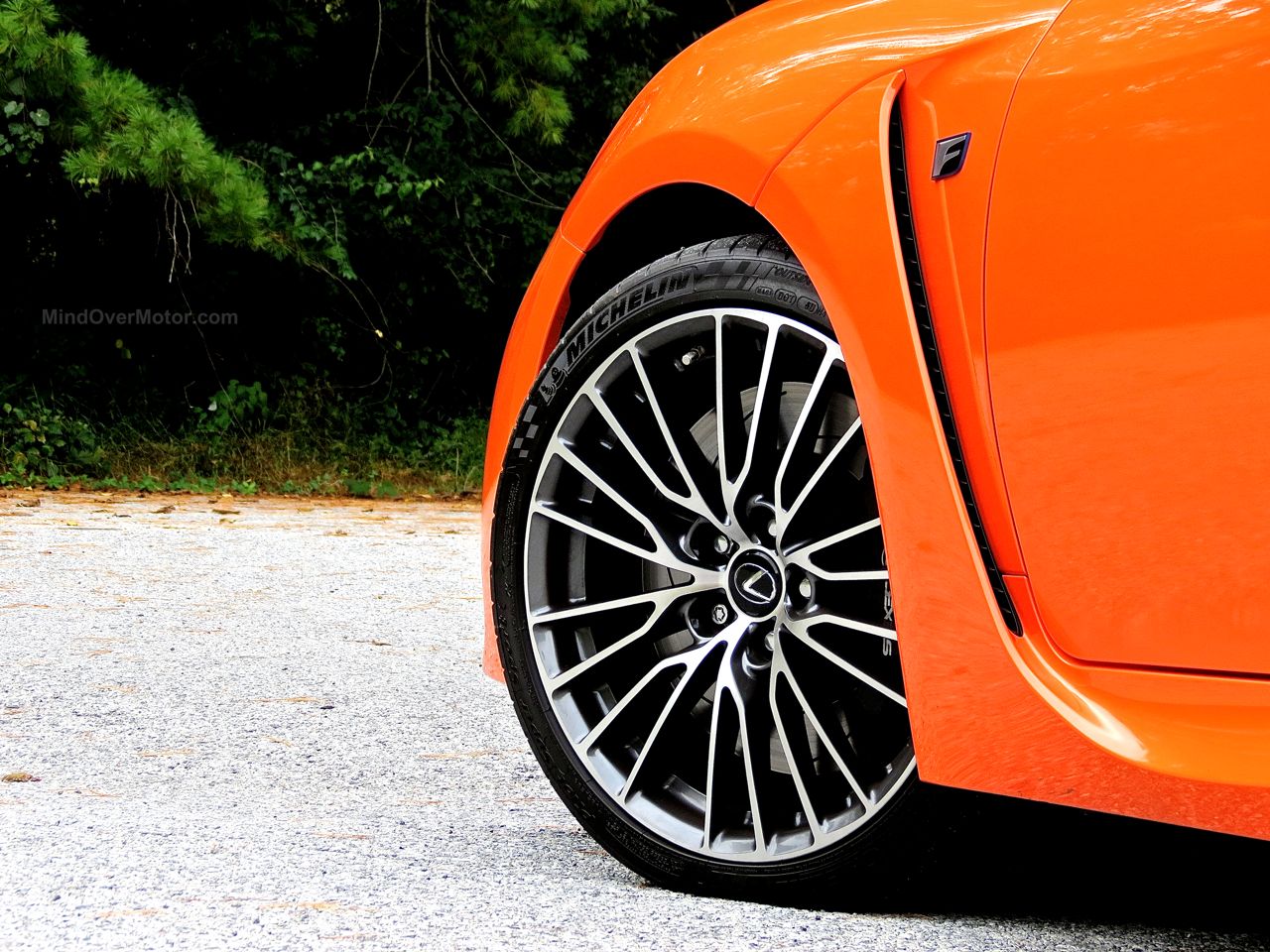 The RC-F is definitely a sports grand touring car like a Maserati or an Aston Martin, rather than a soft cruiser like a Bentley or a Mercedes. The Lexus is a total riot when going through corners at speed, aided by superb driving dynamics in its two degrees of Sport-mode.

Like many modern luxury cars, the RC-F has a Jeckyll and Hyde personality, thanks to some fancy technology. In its Sport modes, the RC-F has razor sharp throttle response and lively steering. It’s brakes are powerful in all driving modes, with big rotors and calipers. The RC-F’s gearbox is also on-point. It’s an 8-speed automatic, but it has a locking torque converter after 2nd gear. That means it really bangs off shifts when you’re running the revs out in sport mode.

The Lexus RC-F is fantastic fun to drive when you want to get crazy, but it’s personality goes further than that. 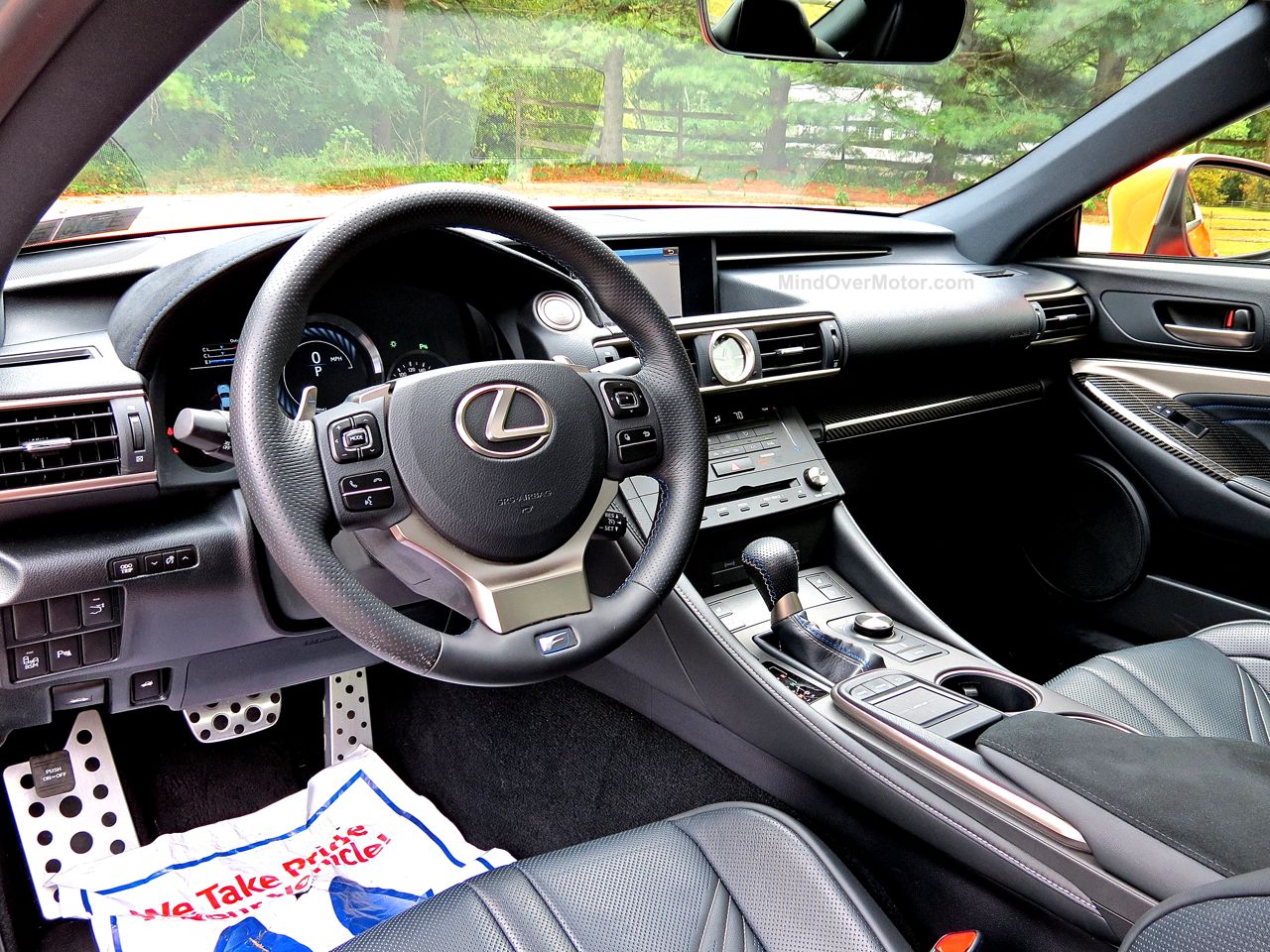 When not in either of the exhilarating sport modes, you can choose between Normal and Eco modes.

I didn’t bother with Eco mode during my drive, because I like to enjoy my life, but I imagine it stays in a higher gear and won’t down shift unless you ask it nicely… with whipped cream and a cherry on top.

I did spend some time in Normal mode. All I can say is, I’m still very impressed how car makers can make one car so savage or so liveable at the turn of a knob. The RC-F softens up a lot in Normal mode, really to the point where it feels like a normal car. It doesn’t quite float on a soft cloud, but this isn’t a car for someone who’d want that.

You could put a lot of cruising miles on an RC-F, and it would be very pleasant. Isn’t that what a grand touring car is all about?. 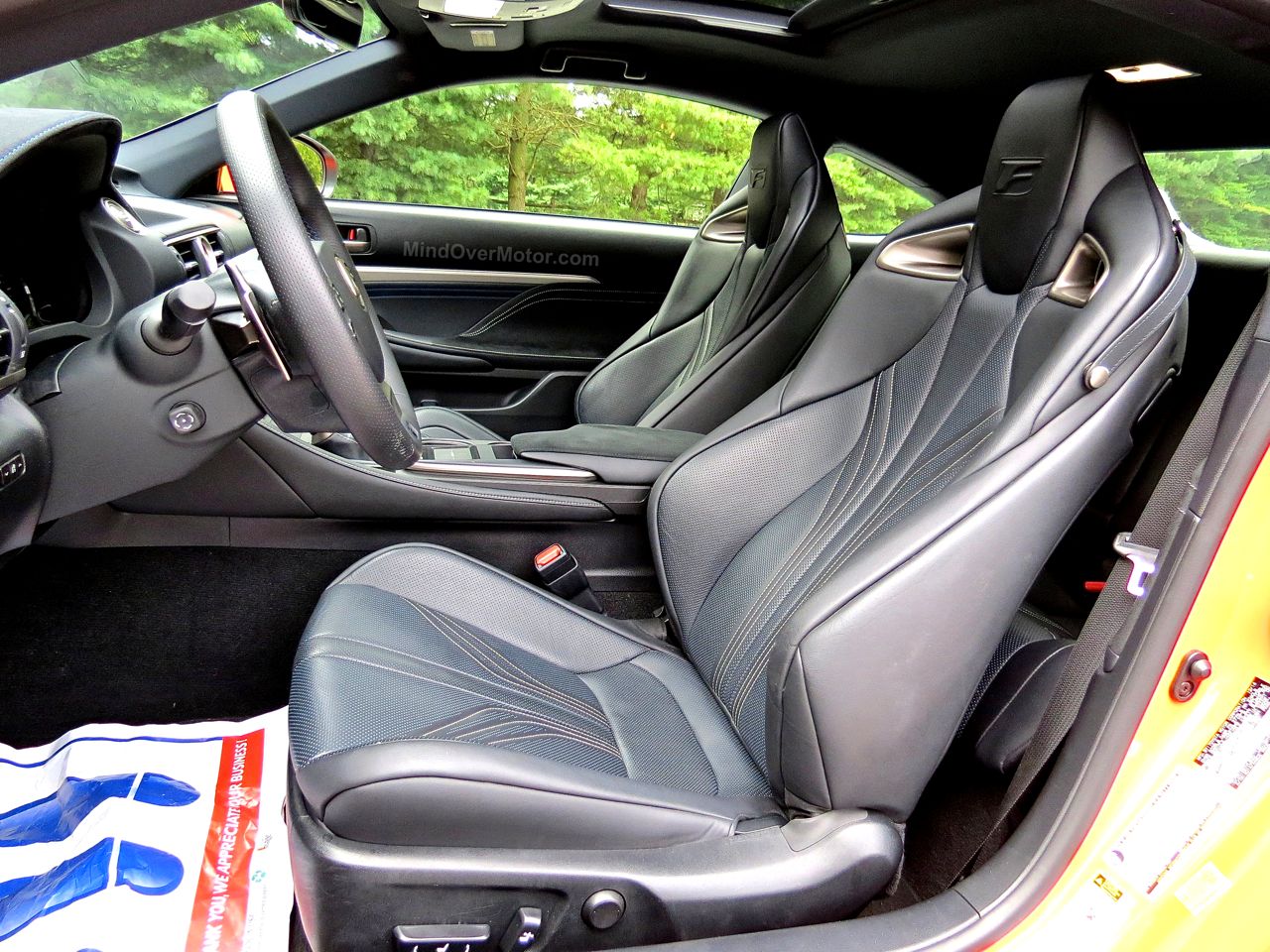 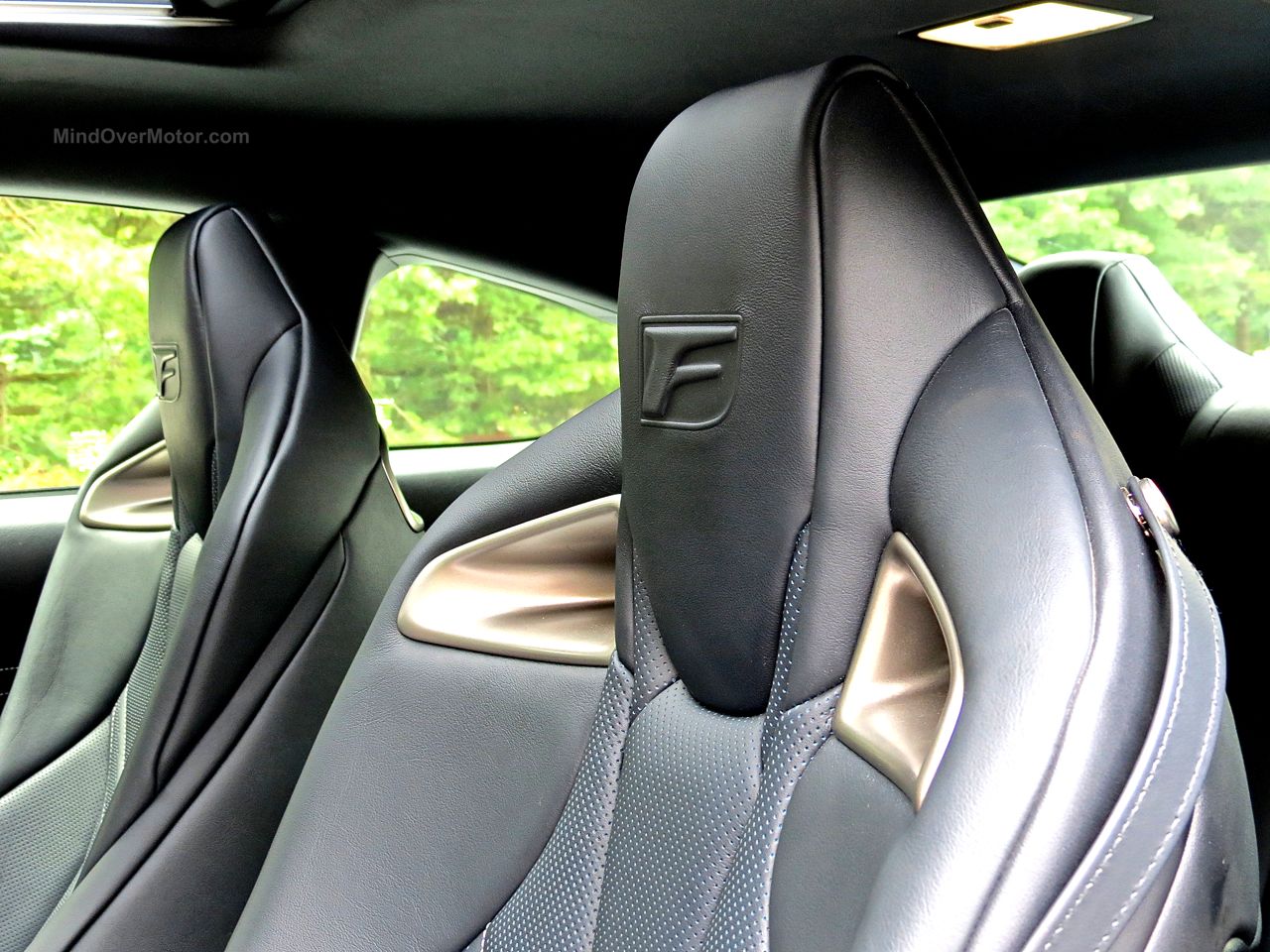 Reliability: The Ace in the Hole

Most high-performance luxury cars are known for their hefty maintenance costs, and often finicky reliability. I mean, sure you could buy a used Maserati, but it’ll probably spend more time being fixed than out driving. And nothing takes the “grand” out of your tour more than when a check engine light suddenly appears and your car gets stuck in limp mode.

Meanwhile, Lexus is literally the #1 name in reliability and long-term quality in the entire auto industry. If there is a fast car that could be considered a safe bet, this is it.

The RC-F is a car you wouldn’t have to worry about putting 200,000+ miles on. It’s a car you could drive cross-country time and time again without a care in the world. You know it will be solid, and that’s sure something you don’t get with any used exotic. Even it’s German rivals, solid as they may be, they’re all known for having lots of little electrical gremlins.

So if you really want a car to go “grand touring” in, then you should really consider the logistical side of that task. Lexus has an unparalleled reputation for quality and durability over time. That, in my mind, is a huge advantage for the RC-F. 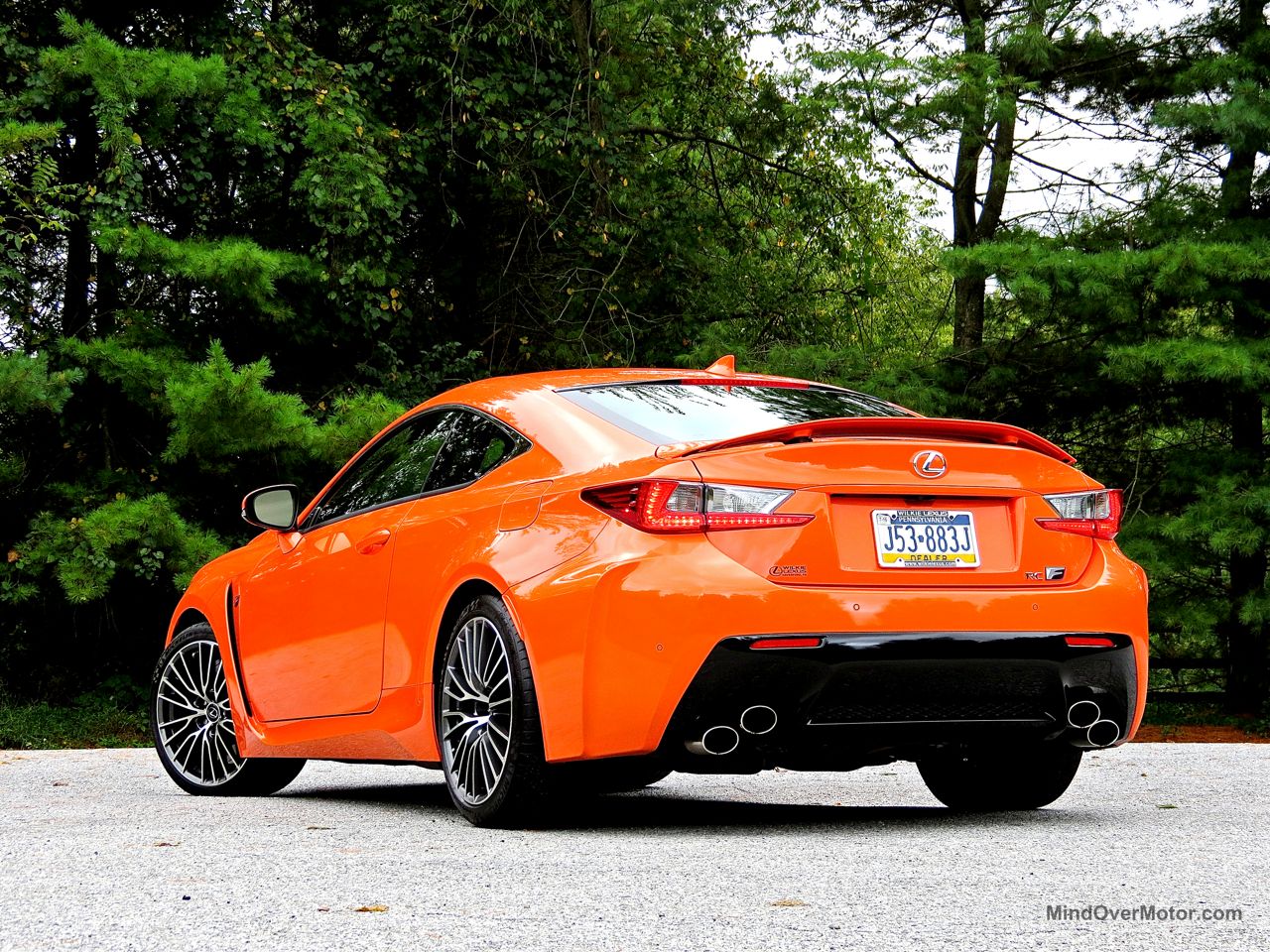 I basically have to nit-pick here, or be superficial. Even those who wouldn’t purchase an RC-F must concede that it is a damn good car for the money.

If we’re going to nit-pick, I think the RC-F should be at least 200lbs lighter, it should have 500hp from its 5.0L V8, and it should come with the option of a manual transmission.

Even so, none of those nit-picks really take away from the RC-F, as-is. It’s the total package that sells it for me.

Maybe it’s not as fast as the BMW M4 or Cadillac ATS-V. Maybe it doesn’t quite have the curb appeal of a Maserati, an Aston, or a Bentley. Those are all factors any potential buyer must weigh for themselves, but the RC-F’s other benefits are substantial. 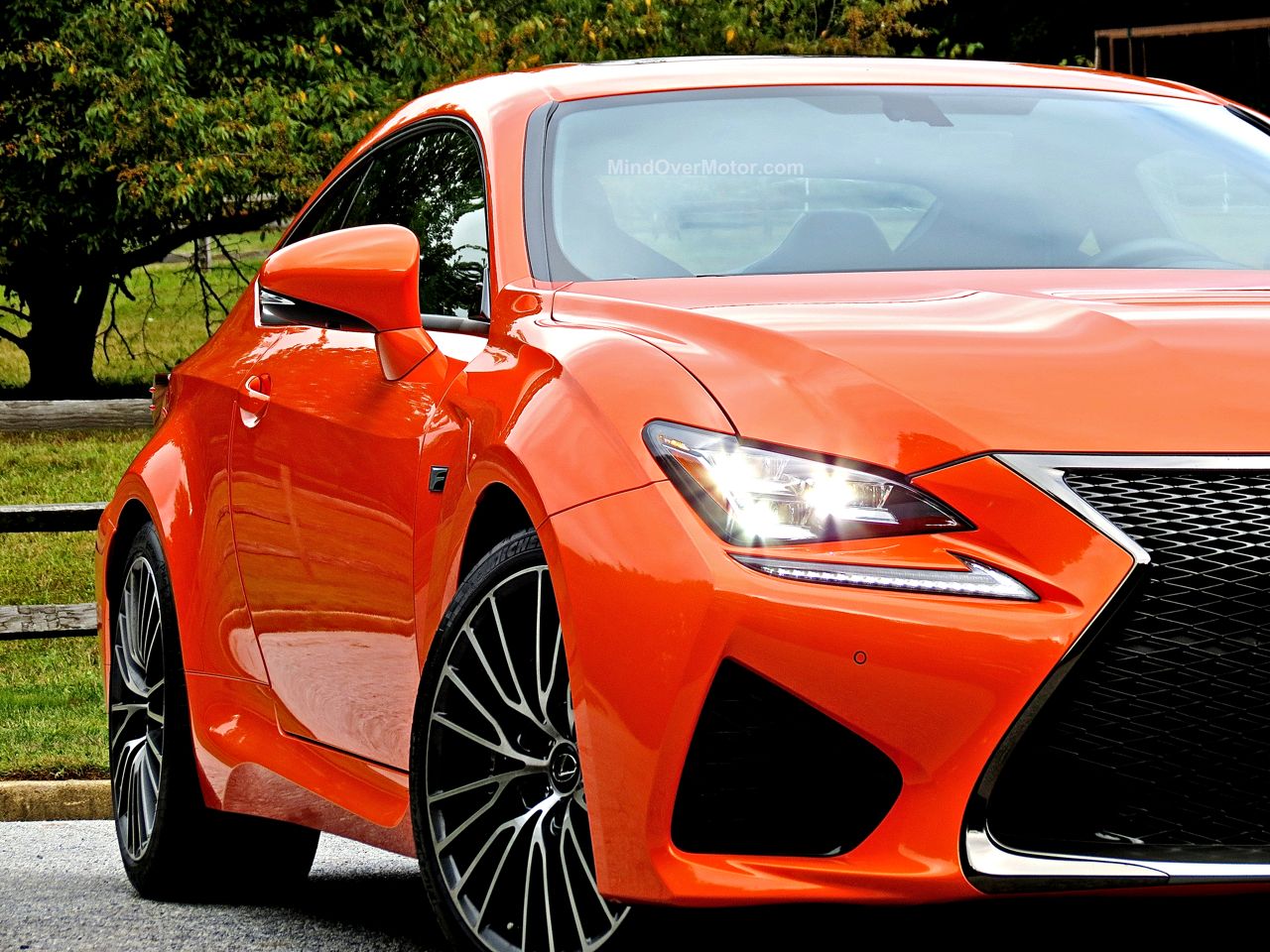 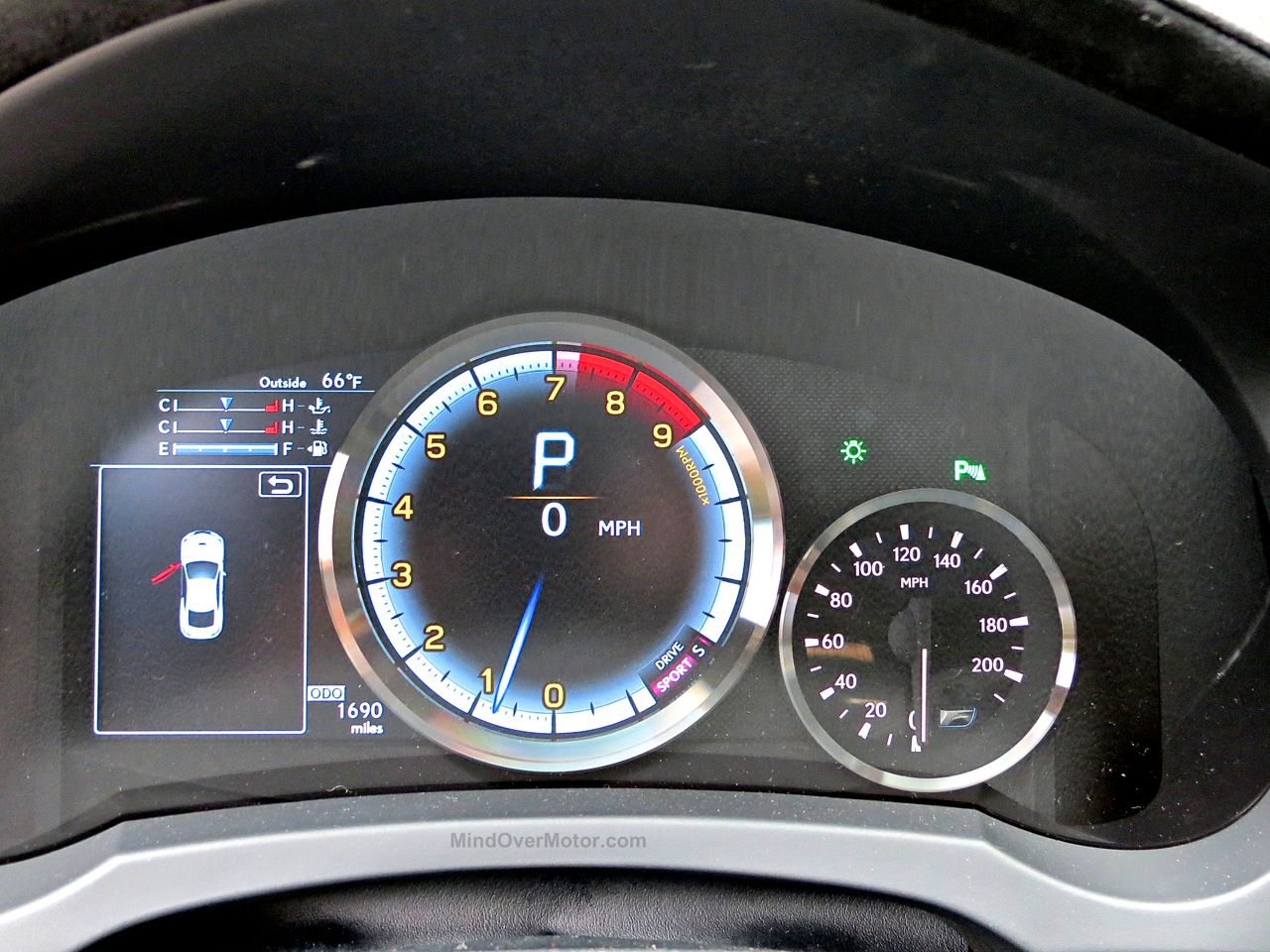 I’ve already discussed most of the RC-F’s competition, and I think its reputation for reliability as a Lexus gives it a unique competitive edge for buyers to consider. The RC-F is a fast, fun, stylish, and comfortable car that will start every time, year after year.

Potential buyers must ask what that’s worth to them. 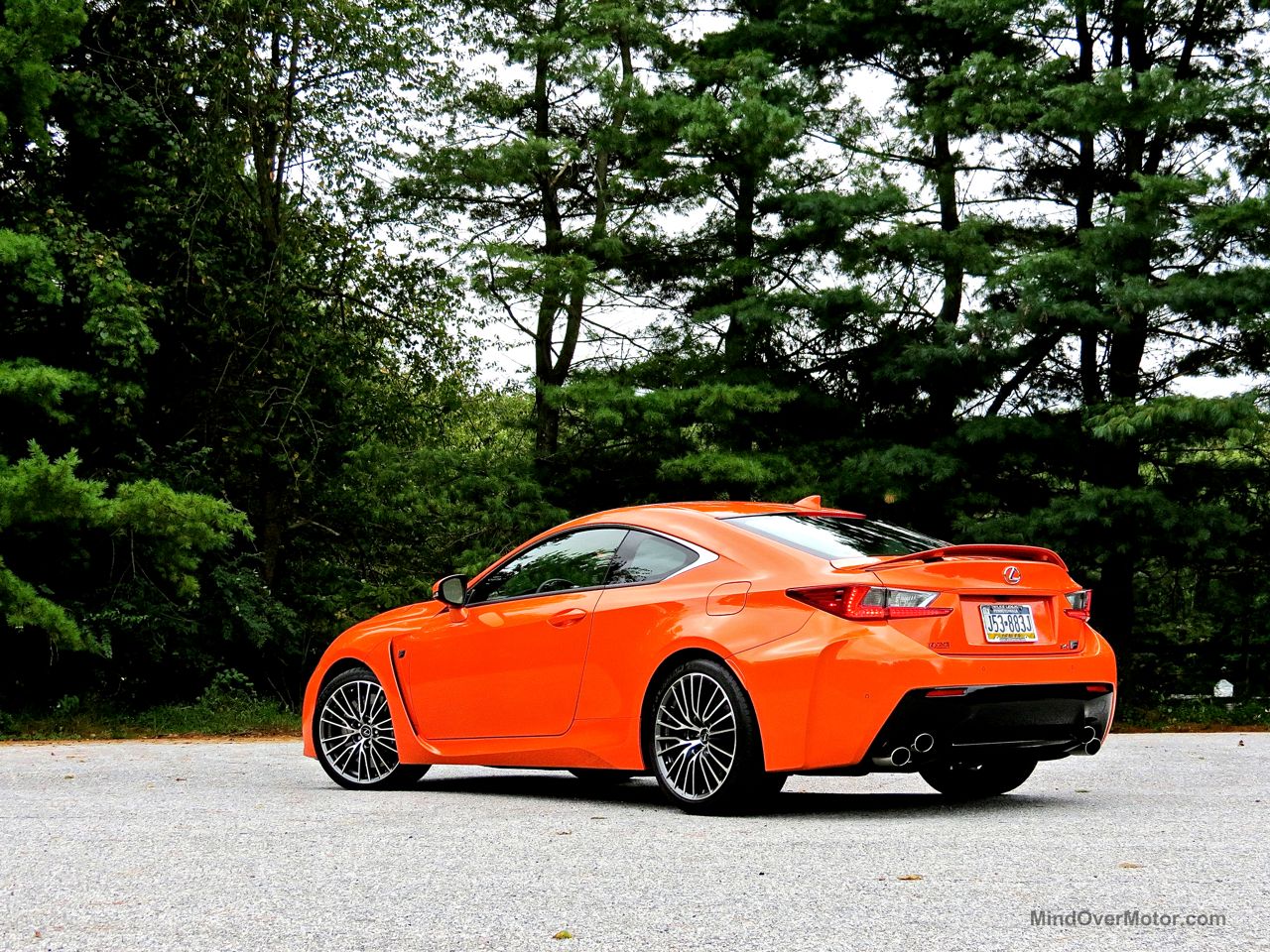 I think that, all things considered, the Lexus RC-F is the best grand touring car available for the money it costs.

I love the fact that it has a nice balance between sport and comfort personalities. It’s a car I’d love to drive all over the country because every time I found a great road I could just kick it into sport mode and have an absolute blast. Then, when the fun is over, I know it will get me home, even if home is far away.

Reliability is a huge, often overlooked factor in the world of grand touring cars. While this Lexus is expensive, it’s not quite to the point where the people buying it implicitly have enough money not to care what it costs to maintain. And I don’t care how rich you are, nobody likes breaking down, especially during a long trip.

The Lexus RC-F has a unique appeal, and it is an option all smart buyers should seriously consider.

PS: A very special thanks to Wilkie Lexus in Haverford, PA (near Philadelphia) for letting us drive their stunning orange RC-F for this review.

And contact Benjamin Trotenberg for inquiries. Ben came with us on our drive, and he was very informative, pleasant, and accommodating. He made sure we had an awesome time! 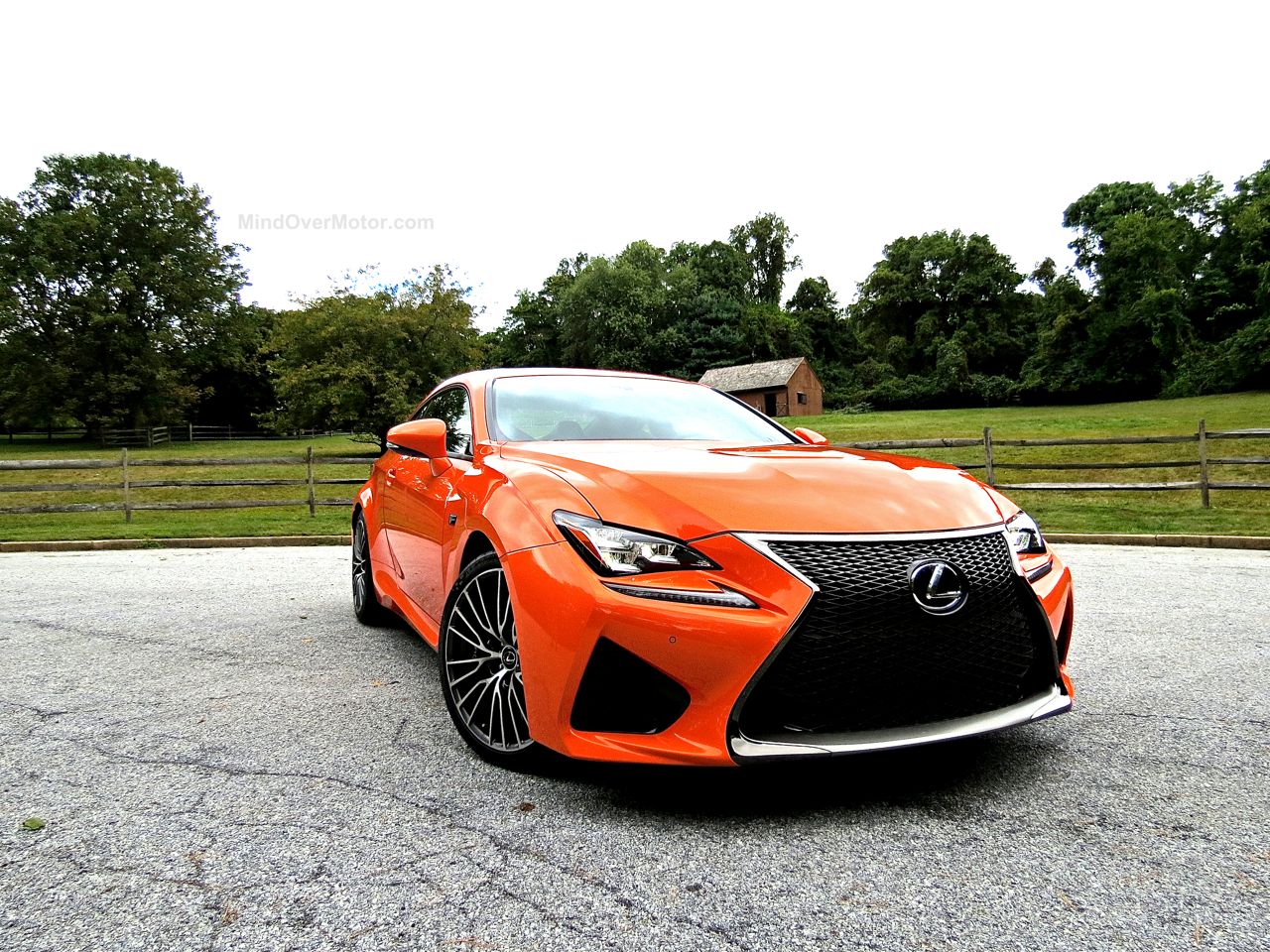 7 thoughts on “Lexus RC-F Review: The Best GT Car For The Money?”