Porsche has finally done it, they’ve brought back the manual GT3 and have given it the 4.0L engine to boot. It’s basically the Porsche we’ve all been dreaming about, and it’s the car Porsche once said they’d never build again. Right after Porsche said the days of manual GT3s were over, values of 997 GT3s immediately went through the roof. It became abundantly clear that Porsche was making a mistake, and this new 991.2 GT3 is here to set things right.

But what’s going to happen to the values of all of those 997 GT3 models that skyrocketed in the last few years? This new 4.0L GT3 with a manual is pretty much an attainable version of the coveted 997 GT3 RS 4.0 or the mighty 911 R, and with PDK it’s a little too similar to the much-inflated 991 GT3 RS.

At the time I’m writing this, the 991.2 GT3 has just officially been released at the Geneva Motor Show, and an audit of online sales listings show that the market hasn’t really reacted yet. Many prices are still drastically inflated (as you’ll see in the screenshots below), and that means a lot of dealerships are about to get royally screwed.

Obviously, everything in the car world is hype. Prices always skyrocket on new models when the first few units are trickling into showrooms, and everyone is fighting to be the first with the car. I see dealer markups likely climbing to $250,000-$300,000 initially, and then dropping off to fair value once supply becomes available. The 911 market has surely already begun to react, but expect it to be in full effect once 2018 GT3s are in-stock and readily available.

I see the Porsche 911 market in two parts, the purists, and everyone else.

For purists, there hasn’t been a 991-gen GT3 until right now, as they won’t even consider buying a PDK 911. Purists are all about rowing their own gears, and the driving experience of a hardcore Porsche with a manual transmission. Purists are a special, extremely discerning breed of buyer.

As for everyone else, manual vs. PDK is less of an issue, with PDK usually even being the preference. These buyers behave much more typically of buyers in the larger car market. Newer and faster is usually better.

Let’s take a look and try to predict what will happen. 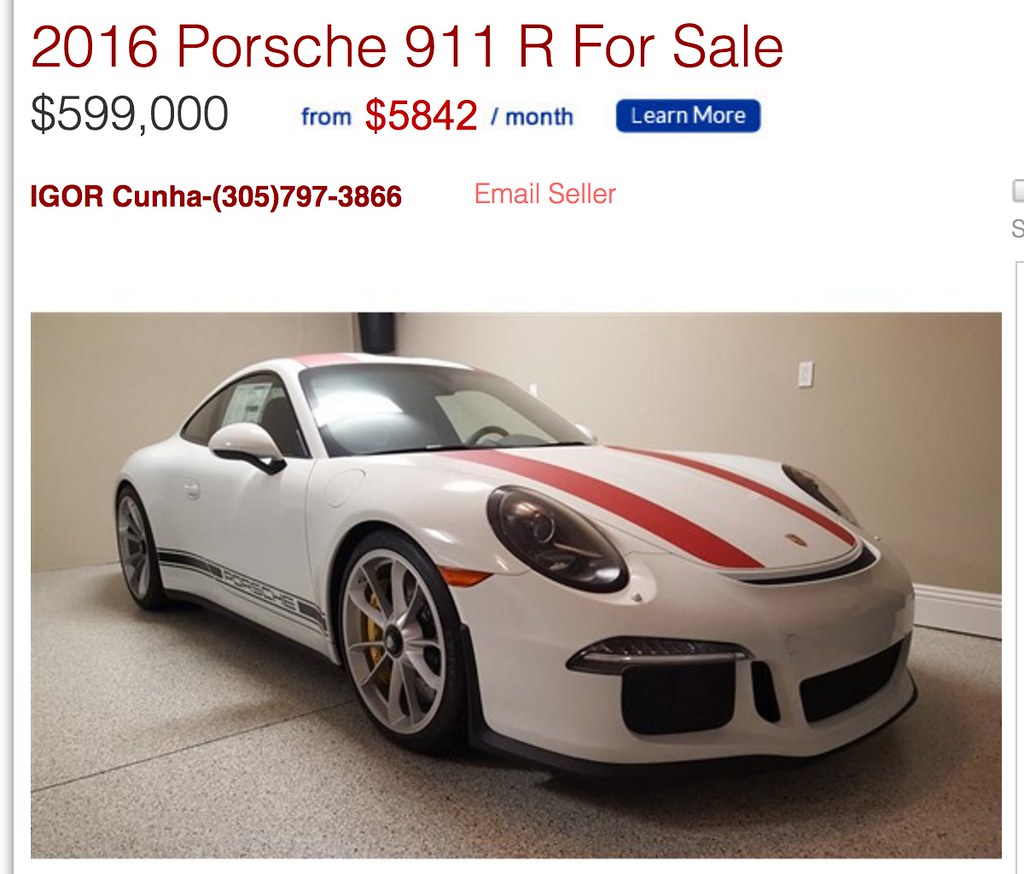 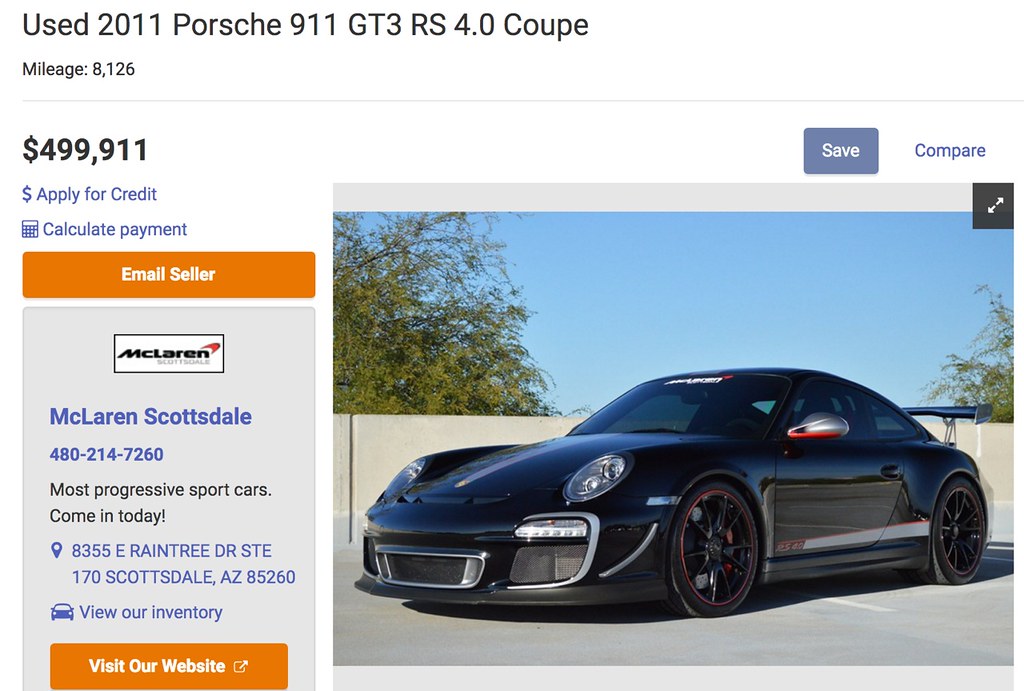 These two are among the unicorns of the 911 market. Both were special editions built in limited numbers, with 600 RS 4.0s and 991 911 Rs gracing this Earth. They are each the most collectable model of their generation, and consequently, I don’t think their values will be hit too hard by the existence of the 991.2 GT3. Their market values are so far above that of the new GT3’s price range that people simply won’t be cross-shopping them. In fact, I can even see some very wealthy people buying a new GT3 to enjoy thrashing and a 911 R for their collection.

These were the cars that skyrocketed in value when Porsche said the GT3 would be PDK-only in the future. The 997 GT3s filled the void in the market for the last few years, and will now suddenly become substantially overvalued. What was once a most-coveted hardcore 911, is now going to be a hot potato among dealers, as their market value decreases.

That’s not to say the 997 GT3s and RSs are bad cars in any way, they’re still phenomenal. But they were filling a void in the market that’s now suddenly not there anymore. Their values surely won’t drop to nothing, but if you’re a dealer price-gouging a 997 RS to $200,000, you may soon find it tough to sell that car for more than $150,000.

The 997 will still be a heavily sought after car by the purist crowd, but it’ll be tough to justify spending the same money on the old ones as a new one with the mighty 4.0L flat six that revs all the way to 9,000 RPM. Everyone has been raving about the 911 R, and now you can have most of that same experience for $145,000.

I feel sorry for anyone who recently spent $150,000+ on a 991.1 GT3. It’s a phenomenal car, but now there’s a bigger and badder GT3, and you don’t have the manual purists to help save your investment. The PDK-only 991.1 GT3 has officially been replaced in the Porsche lineup, and it will now depreciate as most cars do. It’s the addition of the 4.0L in the 991.2 that will really kill things for the previous GT3. Even those who don’t care for a manual will still want a ticket for some 4.0 fun.

Here lies a blessing for many, though. The Porsche 991.1 GT3 is one hell of a performance car, and a total thrill to drive. Is there a better car conceivable to buy for around $100,000? I don’t think so.

In many ways this one is a bit tricky to judge, but I think we can all agree it’s vastly overvalued at $300,000. (Notice how the green RS above has 501 miles on it, and the orange RS has 8 miles on it, then compare the prices. Yea, it’s absurd.)

For road use, the 991.1 RS is essentially the new GT3’s peer. Both have a 4.0L engine, and both have all the current technological go-fast tricks. What separates them on the road will be the 991.1 RS’s more aggressive appearance, and the 991.2 GT3’s slightly higher revving engine. Both equipped with PDK, it’s basically a toss up if you intend to drive mostly on the street.

If the racetrack is where you like to live your life, then the 991.1 GT3 RS is still the ultimate modern Porsche for you (at least until the 991.2 GT3 RS comes out). With more downforce and more grip, the RS is a track-focused weapon like very few others for the price. You basically need to buy a dedicated racecar if you want to lap quicker than this.

Value wise, there was already a big market correction coming for the 991.1 RS. Dealers price gouged this thing up into the $300,000 range, nearly doubling the original price, and many have been sitting on the lot. Now, with the advent of the new 4.0L GT3, there’s much less reason to ever spend that kind of money on an RS.

In general, if cars like the 991.1 GT3 become available at lower price points that will drive the prices of other 911 models down as well.

If you’re someone looking at a Carrera GTS for $115,000, and you start finding GT3s in your price range, you’re going to buy the GT3. That will push the value of the GTS down to the point where someone looking at a Carrera S will now want a GTS, and so on, and so forth. I can definitely see this affecting values of the normal Porsche 991 market, and maybe other, non-GT3, parts of the 997 market as well.

So what does this mean?

If you’re a dealer with a soon-to-be-way-overpriced-Porsche on your lot, try and find a sucker fast, or the sucker will be you.

I’m thrilled Porsche has decided to make the 991.2 GT3 the way they have, but it’s certainly going to stir things up.