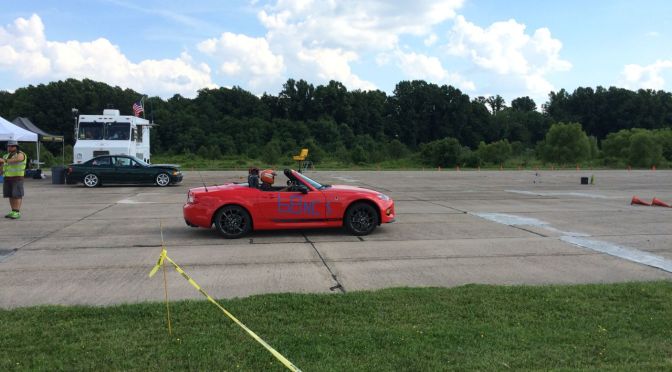 As a car guy, who’s had a license for a decade now, I really should have been autocrossing at some point, right? But until this past weekend, I hadn’t… at least at an official event.

Autocross is one of the best things anyone who takes driving seriously can do for their skills behind the wheel. Even if you’re not a gearhead, it will just make you a far better, far safer driver, knowing how to control your car.

Honestly, I’ve been meaning to get into autocross for years, but I’ve always put it off for some reason. I even bought and modified my first (very rusty) Miata with the idea of autocrossing in mind. I did do a lot of, shall we say, “unofficial” autocrossing in that car in various corporate parking lots in my area, but a real event is totally different.

Now, having just gotten my 2014 Miata, Ace, back from the body shop after it nearly being totalled 4 days after I bought it, I felt it was time.

I went with two buddies of mine, Shane and Dan, each who’ve been mentioned on this blog before. Shane brought along his 1994 Miata R Package, and Dan brought his BMW E46 323i Coupe.

The day was hot and unrelentingly sunny, so we geared up with plenty of water, food, and sunscreen and headed over to the the event.

I think the hardest part for me this weekend was learning to be intuitive with the cones on the course. There wasn’t really a defined layout, more just pylons pointing to one side or the other. It took me a couple runs to get the hang of reacting to the cones on the course. My first lap time was 57.3 seconds, or around the same time as this rickety old Ford Festiva that was lumbering around during the first heat.

As I got more comfortable with the cone course, I was able to push my car harder. I had my instructor drive for a lap so I could see what he did. That showed me where the true braking points were, and that gave me a lot more confidence. My next lap, I actually beat my instructor’s time by a few tenths, with a run of 50.125 sec, and he was like “WTF Man?!”… I may be a novice to autocross, but I’ve had a few track days, so once I know where I’m going, I am able to push a car at a decent pace.

What I didn’t know until lunch time was that I had actually lead the Novice class for the morning session, just barely edging out a modded Scion FR-S. My mindset immediately went from, “I’m just out here having fun” to “Okay let’s go for it!”

After lunch, now bent on competing, and I was able to find my rhythm pretty well. I stayed in the 50.XX sec range, and was able to dip to 49.46 sec. I DNF’d my last run, though, and that cost me any chance I had at being “King of the Noobs.” Had I not missed the cone, my lap was a quite solid at 48.62 sec, which would’ve given me a solid shot at the win after the PAX calculations. It was damn close, and that made it very exciting.

So I wound up in second place, the “Queen of the Noobs” (Miata joke anyone?), but I still got an awesome pint glass as an award! Not bad for a first-timer in a 100% stock NC Miata.

I think I’ve definitely caught the autocross bug, and I was absolutely thrilled with how Ace performed out there. After the accident a few weeks ago, I thought I’d never get to take him autocrossing, so there was vindication in that alone. It was an awesome experience, and I’d recommend it to anyone.

3 thoughts on “Popping My Autocross Cherry”