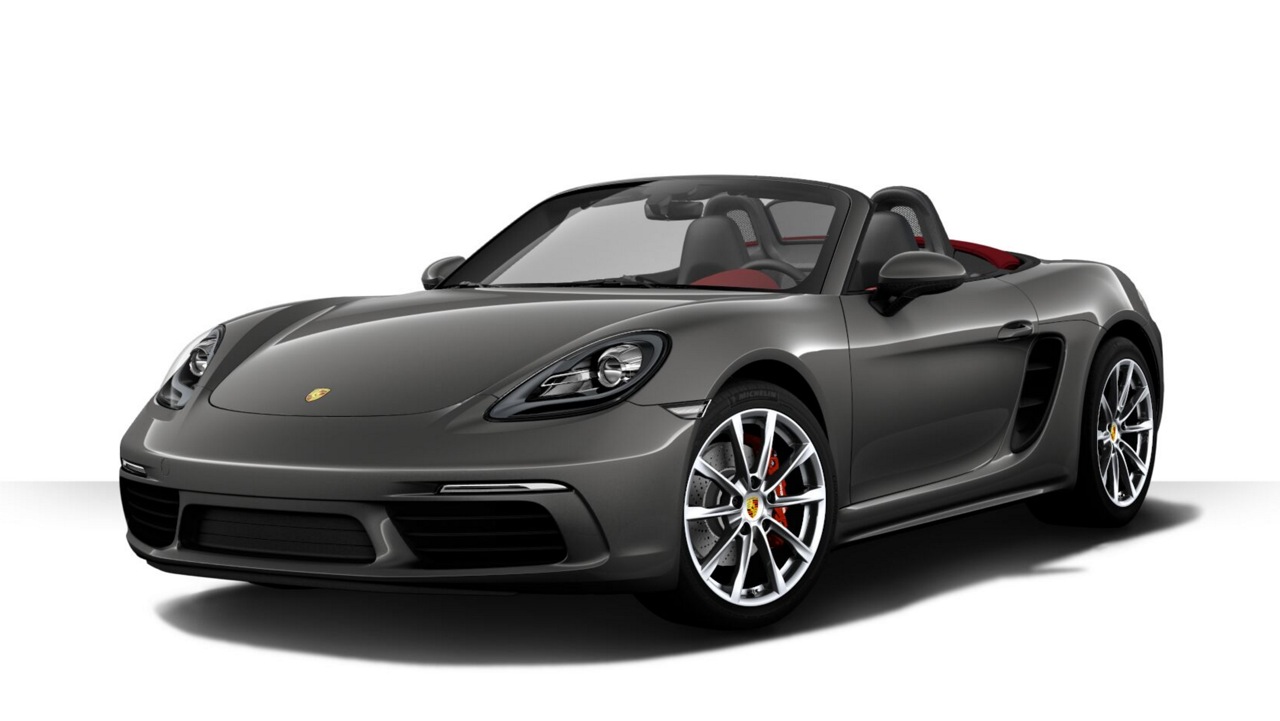 Porsche’s are easy to “buy stupid” because their options are so cool, but are also extremely expensive. If you don’t watch the price tag, and add everything you never knew your heart desired, you can quickly wind up spending six-figures on a Boxster that will be worth 1/4 of that in 5 or 6 years. My point is that most of those fabulous Porsche options add very little, if any residual value to your car. So, if you don’t like lighting your money on fire, it’s best to go about configuring your Porsche intelligently.

I’ve been greatly intrigued by the new Porsche 718. It’s a mid-engine roadster with Porsche driving dynamics, and a hefty 350hp to propel it’s relatively light 2,900-ish pounds. The 718 is also now turbocharged, so 400+hp should be an easy ask with some light tuning. It’s a very ideal sports car package, but what’s it really worth in today’s market?

In my opinion, the value for the 718 Boxster S ends around the $80,000 mark. One, because it’s still a normal Boxster model and will not hold that sort of value, and two because you can get a lot of really amazing cars once you get up near $100,000. Best to stay well below that.

Now, when I spec up a car, I try to include all of the options I’d genuinely miss first, before adding anything I don’t really “need.” Look at my options list below, and you’ll see I went heavy on the performance and driving experience related stuff, and compromised elsewhere. 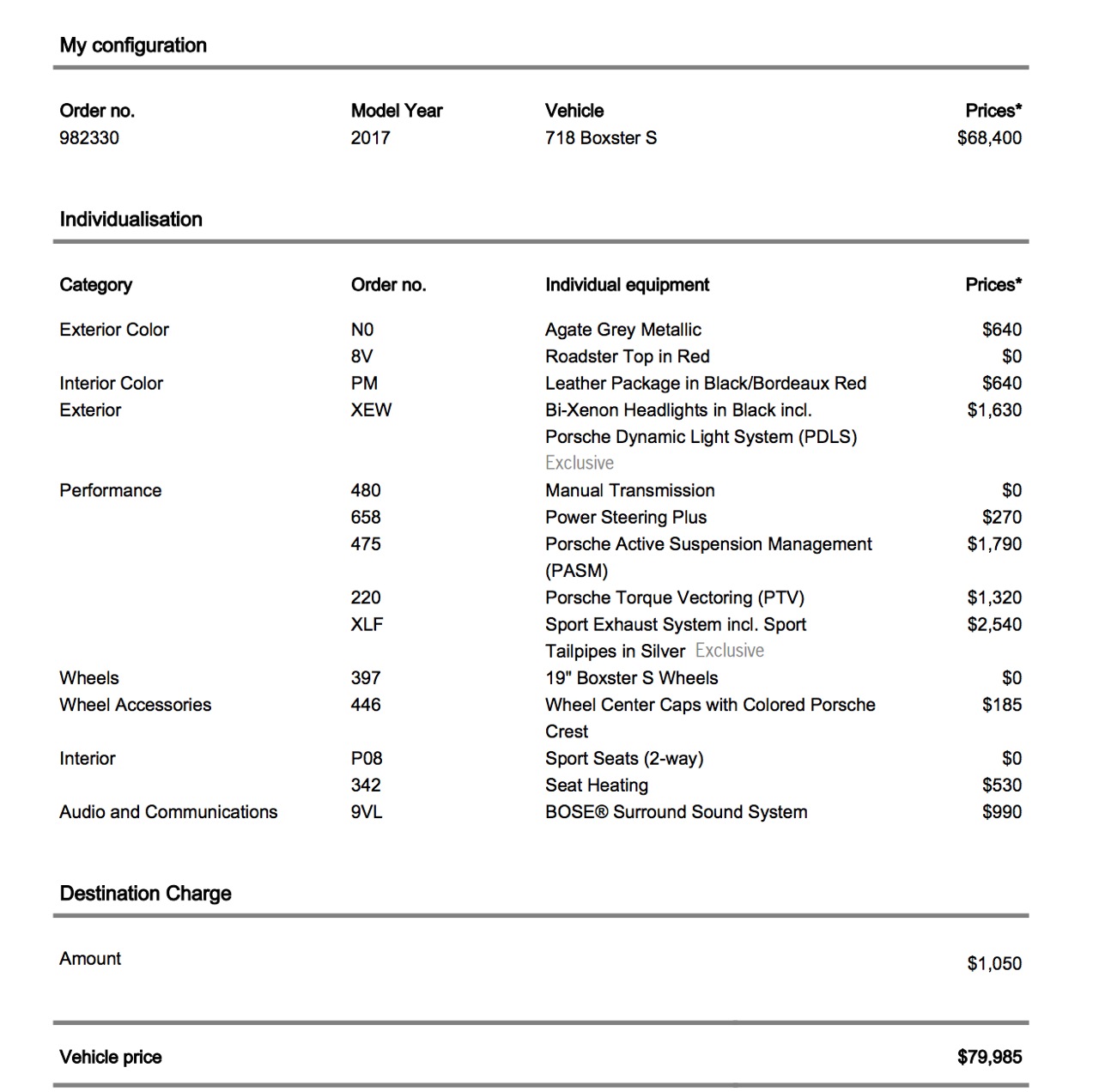 You may notice I didn’t spec carbon brakes, and that’s because they’re a waste of money for anyone who isn’t tracking their car frequently. Those normal Porsche Sport brakes are more than enough for the street, even with occasional track use.

PDK wasn’t even a consideration for me, the 718 is a sports car, and it’s about the driving experience. A manual was mandatory. I got PASM without the 20mm drop because this car would definitely spend a lot of time attacking bumpy back roads. Torque Vectoring also seemed like a good idea, plus it comes with a locking diff, which is important in a RWD turbo car with lots of torque. And of course, I got the Porsche Sport Exhaust system, which features active muffler bypass valves, because life is worth living to the fullest.

Other than that, my options were fairly basic. I got the cheaper Bose stereo in favor of the brutally expensive Burmester system. I also made sure I had heated seats so I could run top-down when it starts to get nippy outside. Lastly, I went for the Bi-Xenon headlights that turn with the steering to give a better view during a corner. If you’re going to drive fast, might as well be able to see where you’re going.

Where did I compromise? First, I kept the basic sport seats with 2-way adjustment, realizing I’d find the most comfortable position, and leave it there. Second, I knew I wanted a red interior, but I went for the middle-of-the-road option with less real leather. Third, I forewent the stunning Miami Blue color that I love in favor of this still handsome, but much cheaper, pewter gray color. I also didn’t get special wheels, navigation, or any interior trim options.

All in all I was able to build a great looking 718 Boxster S with all of the driving experience that I want, and still most of the other options I’d otherwise miss. The final price tag came to $79,985, and I think that’s $80 grand well spent. 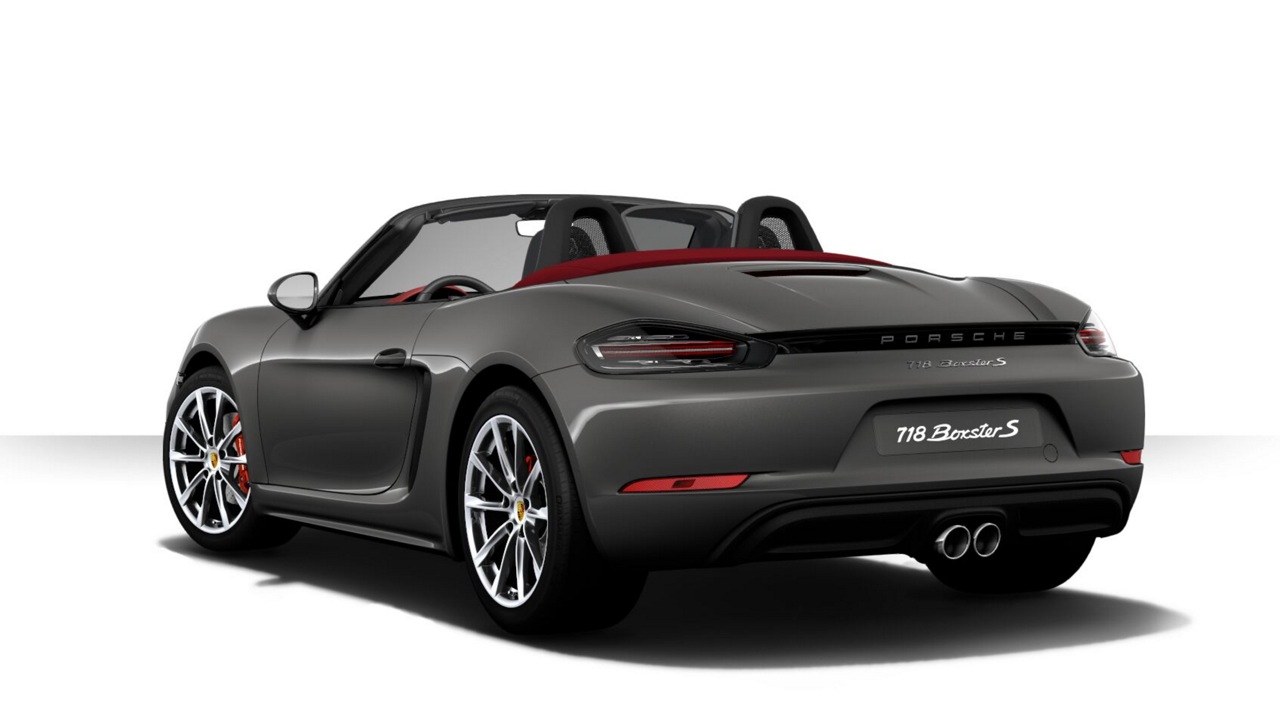 The 718’s performance is definitely solid, especially when you consider some light aftermarket tuning to over 400hp. What this Porsche has that not many other rivals have these days is light weight. Not many cars weigh under 3,000 lbs these days, and that will give the 718 a nimble delicacy on the road that most other cars won’t be able to match.

Alfa Romeo 4C Spider – One of, maybe the only brand new sports cars that is actually lighter than the 718. It’s also got a lot more exotic appeal, and more Italian flavor, for better or worse. The Alfa doesn’t come in manual, but it’s got a crisp DCT, and it’s manual steering makes up for any lack of driving engagement from the gearbox. The Alfa has over 100 less horsepower than the Porsche, but also around 500 less pounds to haul. The 4C is more dramatic to be sure, and more unique on the curb in town. You can also get one pretty much fully optioned for the same $80 grand. The Alfa has a lot going for it, but I’d also worry that some of it’s likely Italian reliability issues may detract from it experience compared to the Porsche.

Chevrolet Corvette C7 Grand Sport – It’s a Z06 in all ways but its engine, which may actually be a good thing. Porsche vs. Corvette is an old rivalry now, but it’s still all about blue collar vs white collar. If you’re serious about tracking your car, the Vette is definitely a better idea than the Boxster, but I think the Boxster is the better option if you want a roadster that may see some occasional daily use.

Used Porsche 997 Carrera GTS – This was the ultimate 997 Carrera model. With a near GT3 matching 400hp 3.8L Flat-Six, the 997 GTS may be one of the best enthusiast cars you can buy for an $80,000 budget, and you won’t even have to spend it all. Also, being a rare edition, the 997 Carrera GTS likely won’t depreciate as fast, or as much as the 718 Boxster is sure to. I’m not sure I see the GTS appreciating, but it should at least hold a lot of its value if you get one with a manual.

Used Ferrari 360 – Honestly, the running costs of a Ferrari alone at this price level would be a deterrent for me. The 718 even has the same sort of performance as a Ferrari 360 at this point, and it’s sure to be WAY more reliable. And if you find yourself wanting that Italian exotic experience, go take another look at that Alfa again. The only exception would be if you could somehow find a decent manual 360 for this budget, even then, it’d surely need some expensive work, but the work might be financially worthwhile in the end.

Used Lamborghini Gallardo – Let me guess, it’s got E-Gear right? HA! Do yourself a big favor and keep it moving, but be sure to tell everyone you were looking.

Used Porsche 997 Turbo – Very similar to the 997 GTS, but a lot faster. Again, I’d have to find one with a clutch pedal to really feel fulfilled, but they’re out there. The 911 Turbo is a different driving experience than the 997 GTS, though, more of a supercar than a sports car. It’s also a lot quieter, and arguably less visceral a driving experience. That said, if speed is your main concern, the 997 Turbo should be near the top of your list, along with a lot of other really fast cars not mentioned here. I’m more about the total driving experience than outright speed, but a 911 Turbo remains very enticing.

What would I choose?

If I had to pick brand new, I’d probably lease the Alfa for a year, and then go buy this 718 Boxster S when that lease was up. Then I could have my Italian icing, but switch to german for the cake itself.

Overall, though, I love the idea of finding a low mileage Porsche 997 GTS. It’s that classic pure 911 experience with just enough modernity in it. It also only weighs a tad more than the Boxster, and already has the 400hp, which comes from a howling 3.8L flat-6. As a driving experience, it’s damn near ideal.