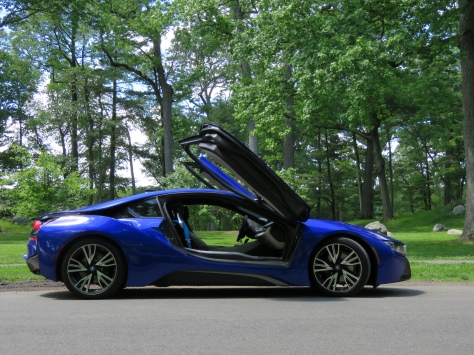 The BMW i8 is today a lot like the DeLorean was in the early 80s.

While not nearly the political phenomenon the DeLorean was, in the market it occupies the exact same slot: a spaceship-looking car with epic doors that doesn’t perform nearly as good as it looks. In fact, the ratio of the i8’s power compared to the Ferrari 488’s is nearly identical to that of the DeLorean compared to a Ferrari 308.

Don’t get me wrong, I actually really love the i8 for what it is, and I enjoyed cruising around in the sapphire blue one you see above. But the i8’s party piece is its appearance rather than its performance. It’s only about as fast as a stage 2 Subaru, but it will turn as many heads in town as a Koenigsegg, especially in an insane color like this. We actually had a guy push his stroller into a curb because he was so fixated on our i8 just sitting at a red light.

The i8 is really is a concept car you can buy, but it’s more for casual drivers than enthusiasts in terms of the driving experience it offers. Also just like the DeLorean ⛄️