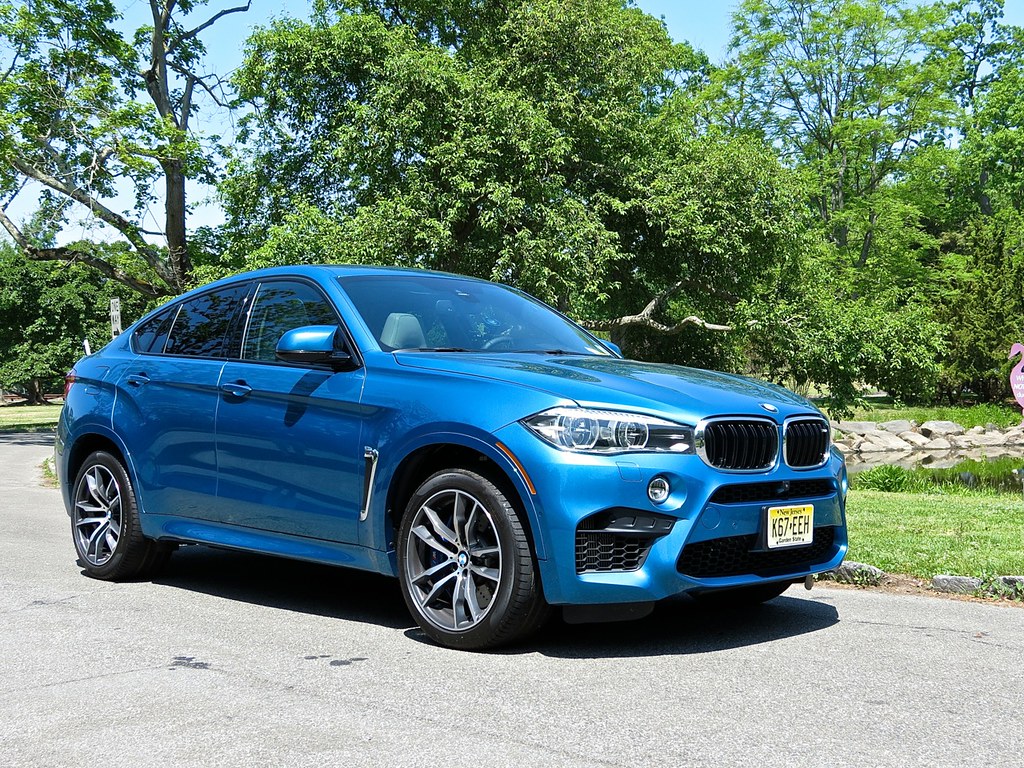 The big teal thing you see here is a BMW X6 M, and it’s everything that’s right and everything that’s wrong with BMW sitting on the same four wheels. Think of it as a BMW M5 with AWD and more ground clearance. Being an X6, and not an X5, it’s also a “Coupe SUV,” which I still find very odd.

On a totally subjective level, I’m not a fan of the BMW X6. I’d even say it’s the flagship of everything I don’t like about the modern BMW brand. They’ve been over-segmenting like crazy, trying to carve the market into thinner and thinner slices, and the X6 is largely where it began.

It all started when Mercedes made the CLS, a beautiful sedan with the sleek design and style of a coupe. BMW saw how well it was received, and decided to try and do the same thing, but with a big SUV. The problem is SUVs aren’t sleek by nature, so the sloped roofline makes the X6 look bulbous and awkward from most angles. With such a large chunky profile, I just think the full roofline of the X5 looks a lot better. People seem to like the X6 because it’s different, but different isn’t always a good thing.

So, in my eyes, BMW was shooting for style, and they missed by a mile. Why, then, would anyone buy an X6 over an X5? Apparently I just don’t “get it.”

In an effort to try and understand the X6, I figured I’d take a spin in the ultimate BMW X6 M. It’s everything the X6 can be with an extra serving of horsepower and handling. If there were any way to make me come around to the BMW X6, driving this beast would surely be it.

First, come along for the ride…

First things first. The color combo on this car was top-notch. The “Long Beach Blue Metallic” exterior looked spectacular, and it really helped distinguish the X6 M as something “special” in traffic. The interior was also beautifully appointed with two-tone white and black leather and crisp carbon fiber trim. This X6 M was loaded with all the modern options one could want, including TV’s for the rear seats. It was a playground of all the modern BMW amenities, and there’s no denying it was quite nice. 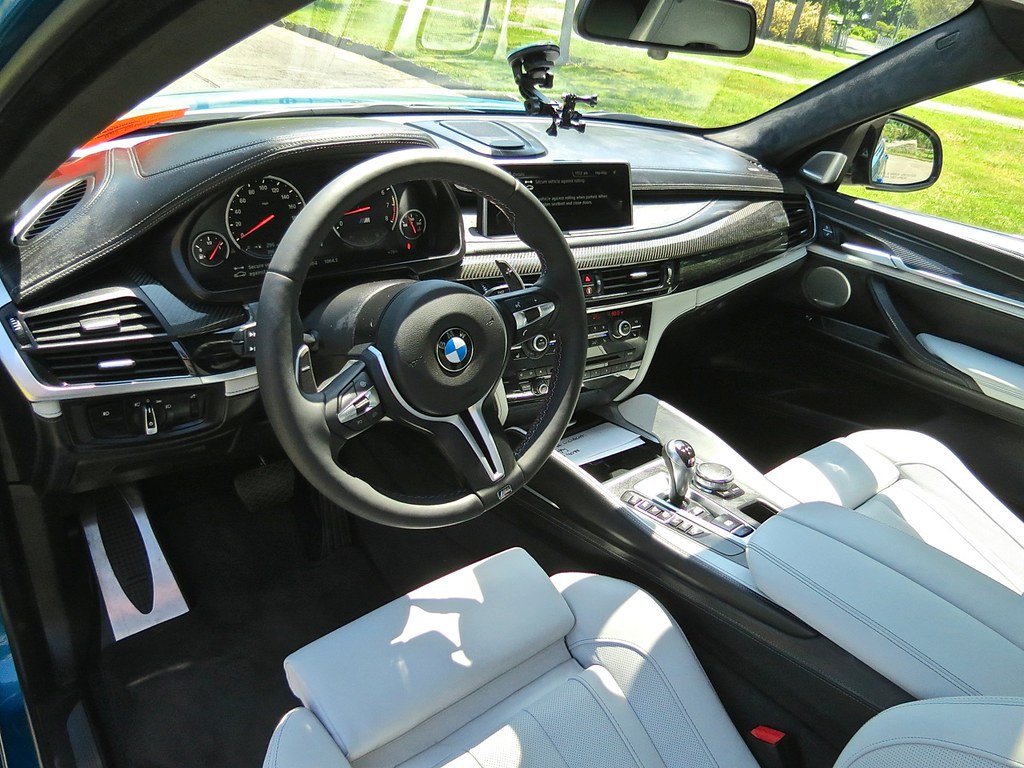 I think what I liked most about the X6 M was how well-rounded it was as a daily driving machine. It’s a real “have your cake and eat it too” sort of car, and that seems to be the focus of the modern BMW brand as a whole. 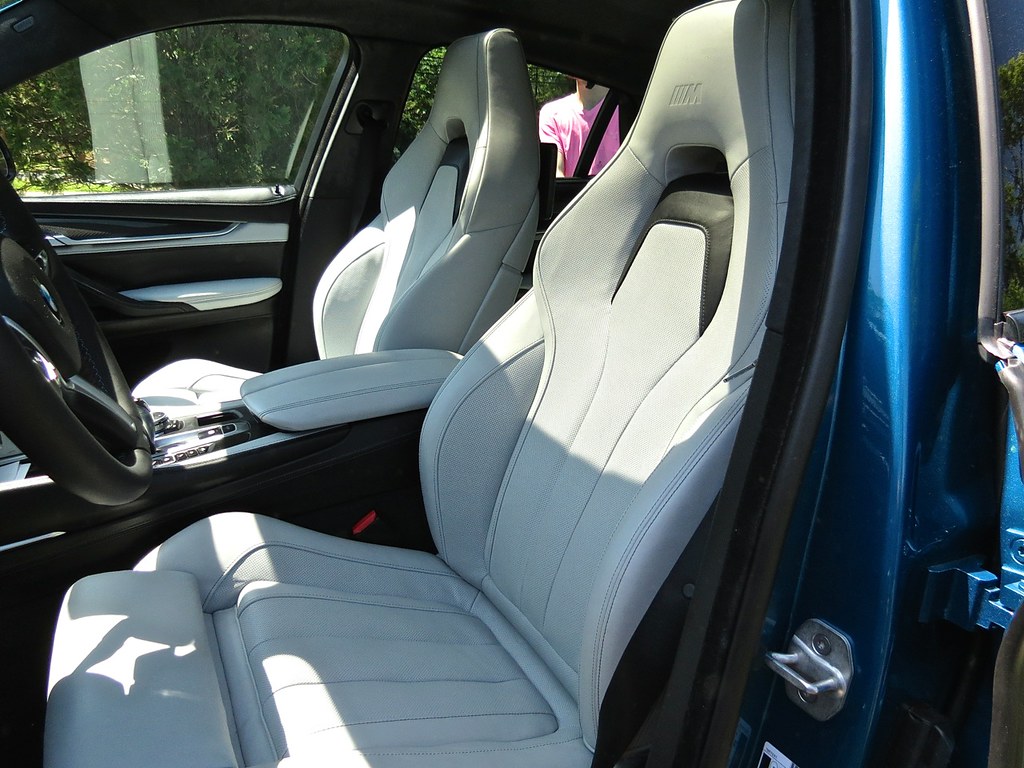 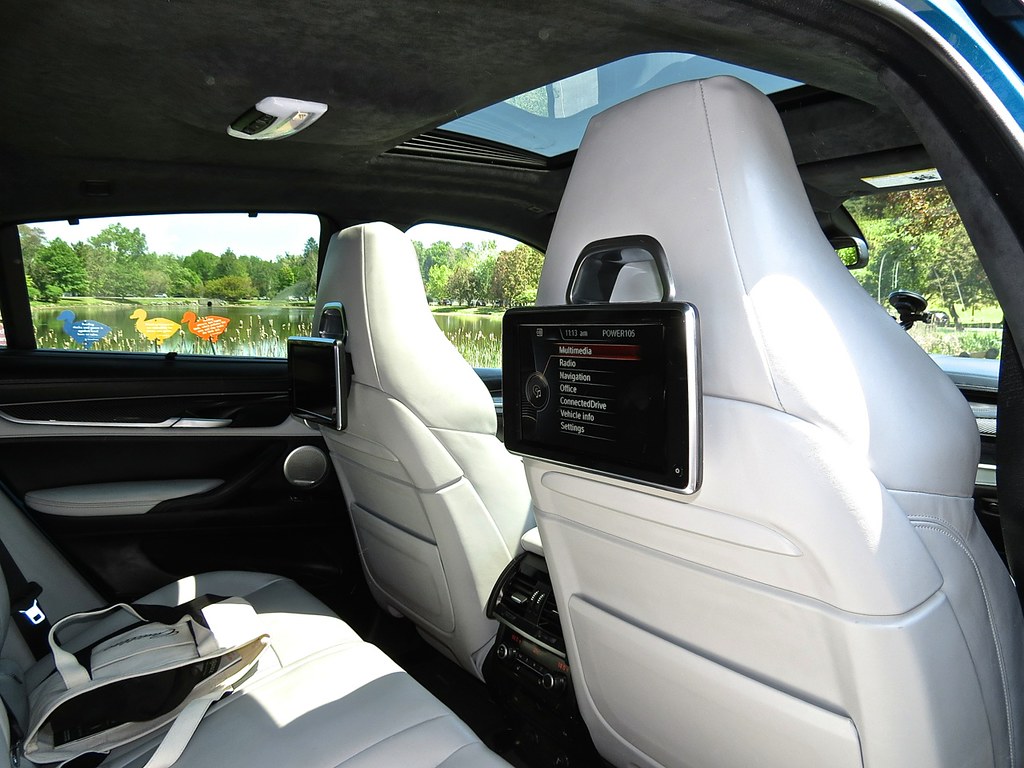 That’s not a bad thing at all. I mean, the X6 M is an extremely luxurious, practical way to get around, and it also happens to be fast as shit. It handles way better than you’d think a big SUV ever could, it stops like a bandit, and it’s 8 speed automatic fires off crisp, satisfying gearshifts. There’s also an exciting soundtrack throughout the cabin as you drive along – a lot of which comes through the speakers, but it does add to the experience.

The X6 M is a very sharp driving SUV. In its sportiest settings, it’s quite a fun drive. I’ve always enjoyed fast SUVs in real world traffic because that’s where they really shine. The X6 M has a lot of literal and metaphorical weight to throw around, and you can exert your command on the road with ease. There’s a reason so many people in BMW SUVs drive like dicks, it’s what the car does best.

Being such a well-rounded vehicle, the BMW X6 M is a phenomenal package for many people, especially in places where extra ground clearance comes in handy. 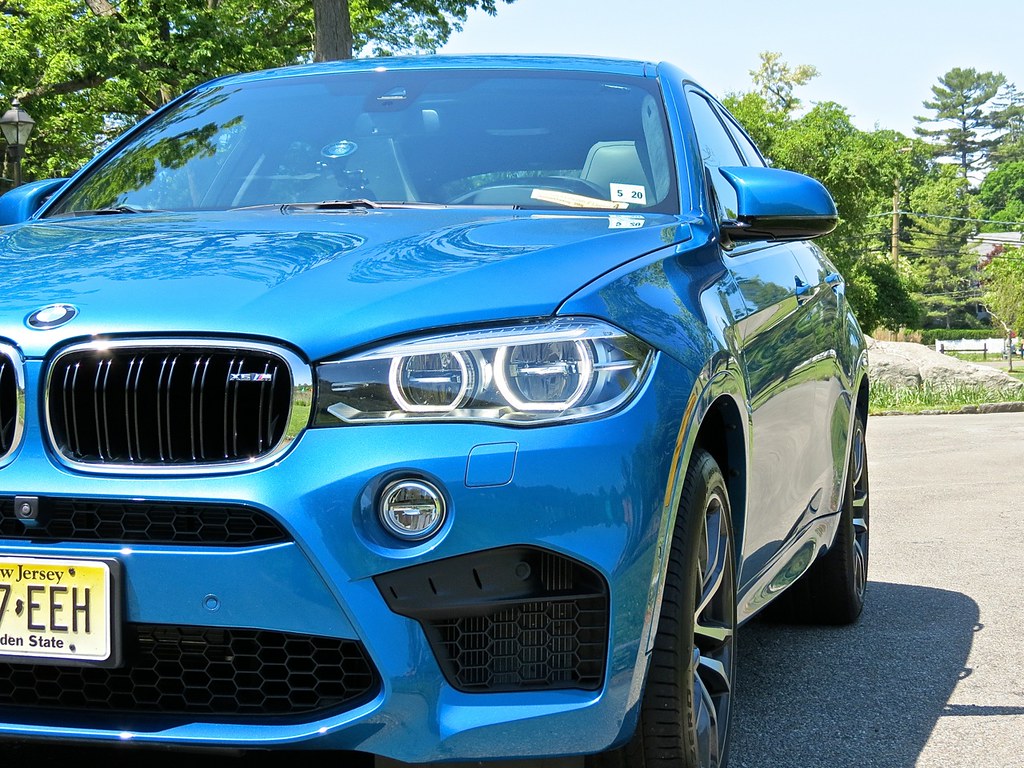 But here’s where I start to criticize

If you buy an X6 M, you have to really want an SUV first, and a high performance car second. Sure, the X6 M is a very capable performer, but it’s substantial 5,200lb heft and large physical size are a constant handicap. The well-roundedness of its SUV package comes at a price from performance.

Getting out of the X6 M, I was totally impressed with everything about it. But then I hopped into a BMW 435i Gran Coupe right after it, and I gained some valuable perspective. Accelerating flat-out down the same highway on-ramp, I found myself at 103 mph where the X6 M had been at 105 mph. For all intents and purposes the smaller 435i was just as fast as the mighty X6 M, with around 60% of the horsepower, and for about half the money. 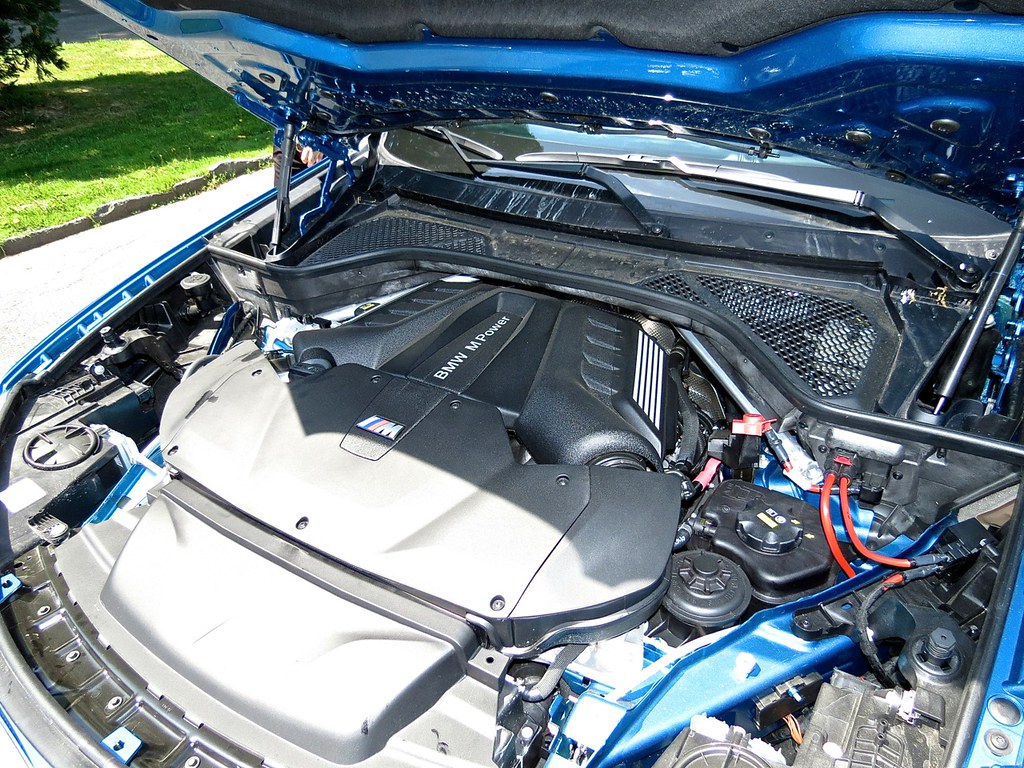 Sure, 567hp looks great on paper, and it sounds mighty impressive in conversation, but when it has to move 5,200lbs it’s not really all that crazy. Let this be a lesson in power-to-weight ratio for us all.

Furthermore, BMW has worked some sort of engineering witchcraft to make the big X6 M handle as well as it does, but at a certain point the laws of physics catch up. The X6 M holds it’s composure well as you push hard into a corner, but 5,200lbs is still 5,200lbs. It’s large proportions also show when you’re on a tight, winding road. It doesn’t have the rally car feel that smaller SUV’s, like the Porsche Macan, have. BMW worked hard to make the X6 M very sharp and responsive to drive, but truly nimble it will never be. 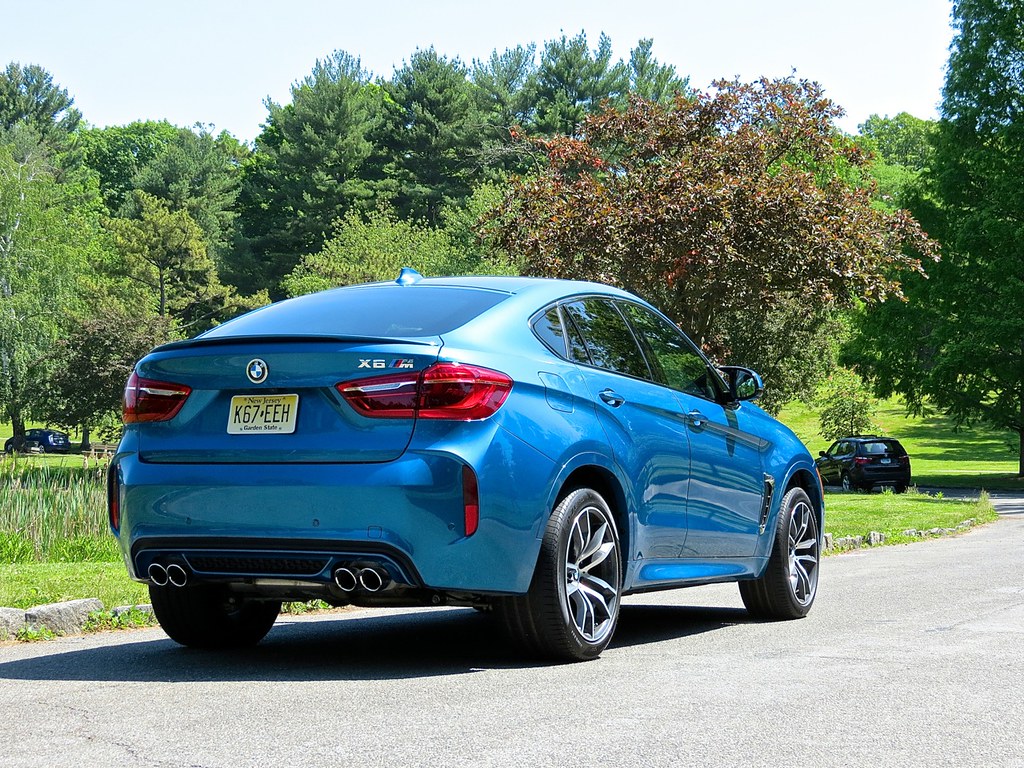 If a posh SUV with some speed is what you want, then I can’t say I’d fault you for buying a BMW X6 M. As a new car you definitely get your money’s worth of features and relative performance. That said, you can bank on some serious depreciation, so be sure you’re ready for that.

As far as direct competition, I see the X6 M’s segment as a pretty even playing field. You can’t really go wrong with the BMW X5 or X6 M, Mercedes GLE 63 AMG, or the Porsche Cayenne Turbo. If anything, though, the BMWs are probably (slightly) the best value. 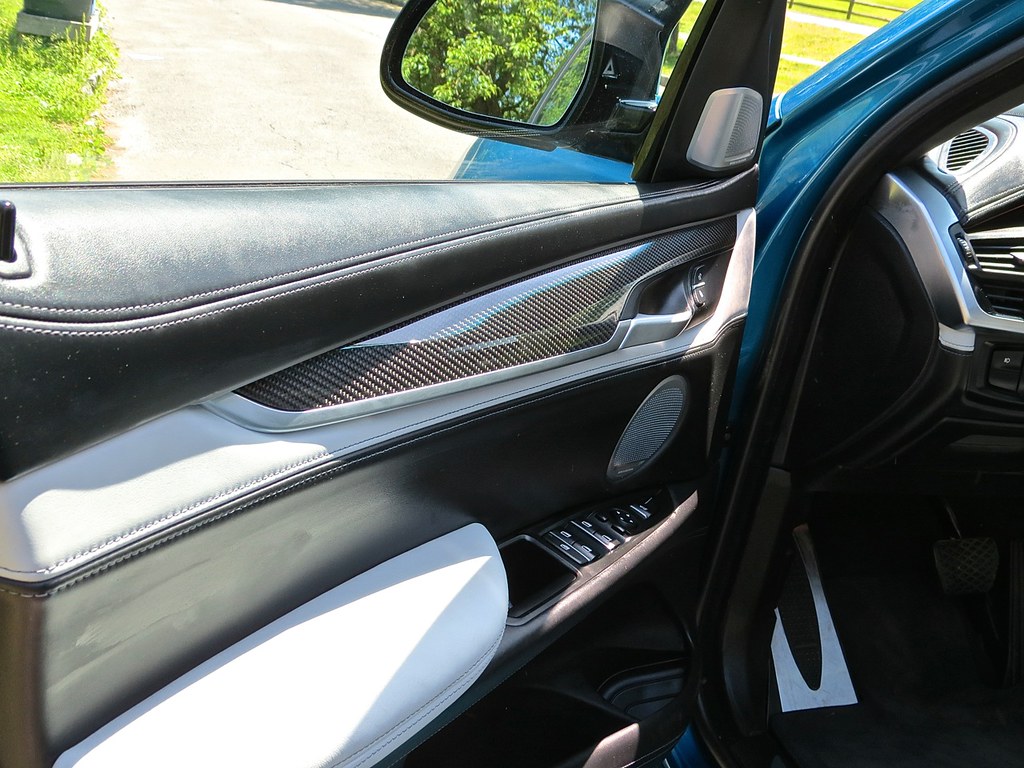 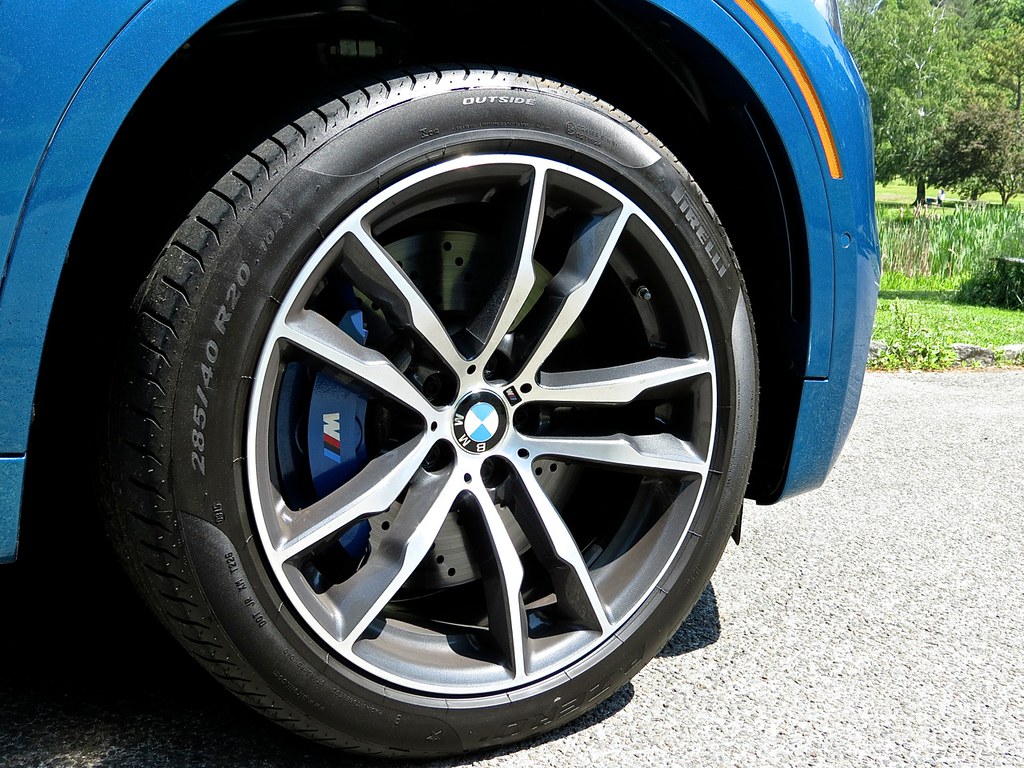 Well, as it turns out the Porsche Macan Turbo starts around $77,000 and even loaded with options, will still cost less than this X6 M. The Macan weighs 1,000lbs less than the hefty BMW, and is about as quick in a straight line, with 10x better handling. The Macan actually feels like a rally car when you attack corners, and it is a far better driver’s car in every regard.

If you’re really a driving enthusiast, like myself, then you know lighter weight means more for enjoying a car than more horsepower. Unless you really need the extra size of an X5 or X6, the smaller SUV segment is definitely where it’s at. In addition to the Porsche Macan, there’s also the Jaguar F-Pace S, the upcoming Alfa Romeo Stelvio QV, Mercedes GLC 43 AMG, and the just-released Mercedes GLC 63 AMG. For those who like BMW’s Coupe SUV style, there’s even the X4 M40i, like a smaller X6 M for half the price. 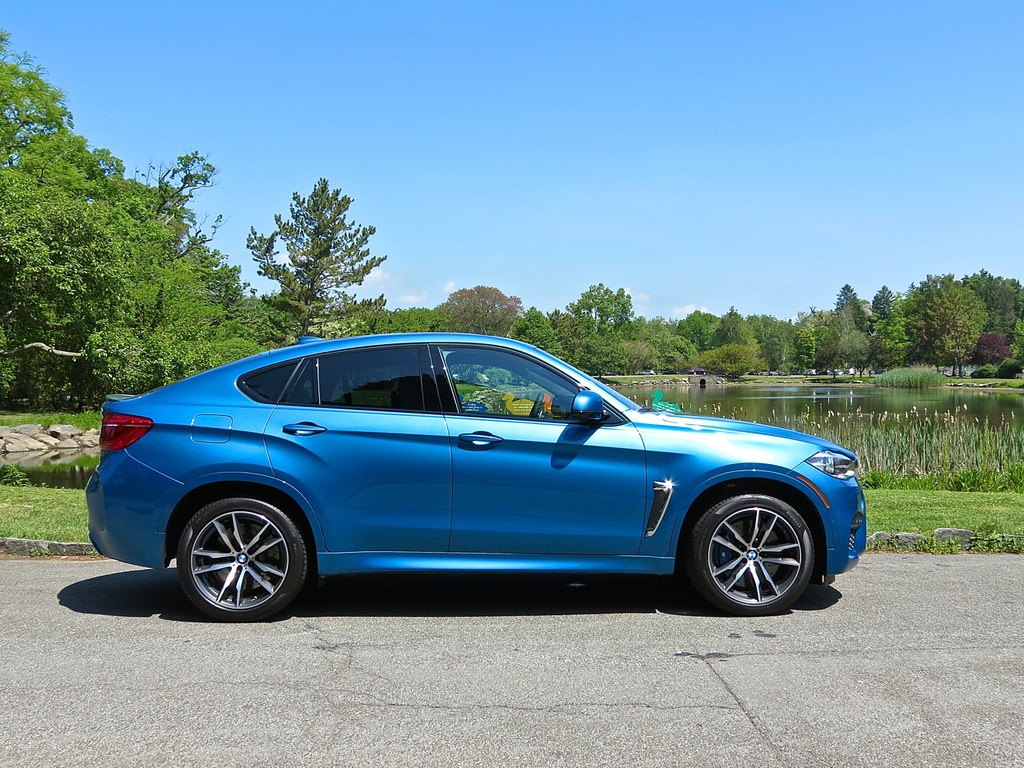 Lastly, there’s another high performance full-size SUV out there that totally ruins the X6 M and all of its six-figure contemporaries for me. It’s the Jeep Grand Cherokee SRT, and it does everything the X6 M does at $120,000 for $80,000 loaded.

The Jeep’s Hemi V8 has 475hp to the BMW’s 567hp, but it also sounds much better, like a proper muscle car. The Grand Cherokee SRT also weighs around 100lbs less than the X6 M, and its handling is equal, if not better than the BMW’s. The Grand Cherokee has all the practicality, and with the right options, even has most of the luxury of the X6. Sure, maybe the Jeep does 0-60 in 4.6 seconds instead of the BMW’s 4.0 seconds, but again, these are SUVs we’re talking about here. If I wanted the most performance for this money I could buy a Porsche 997 Turbo or a Corvette Z06. The point of these fast SUVs is to be well-rounded, practicality, performance, comfort and style together in one complete package. I think the Jeep SRT does it just as well as the BMW, and where the BMW may look awkward, the Jeep just looks badass.

Oh, and let’s not forget the soon-to-be Jeep Grand Cherokee Trailcat with the 707hp supercharged Hellcat V8. That’ll make the case for this Bimmer even more difficult. 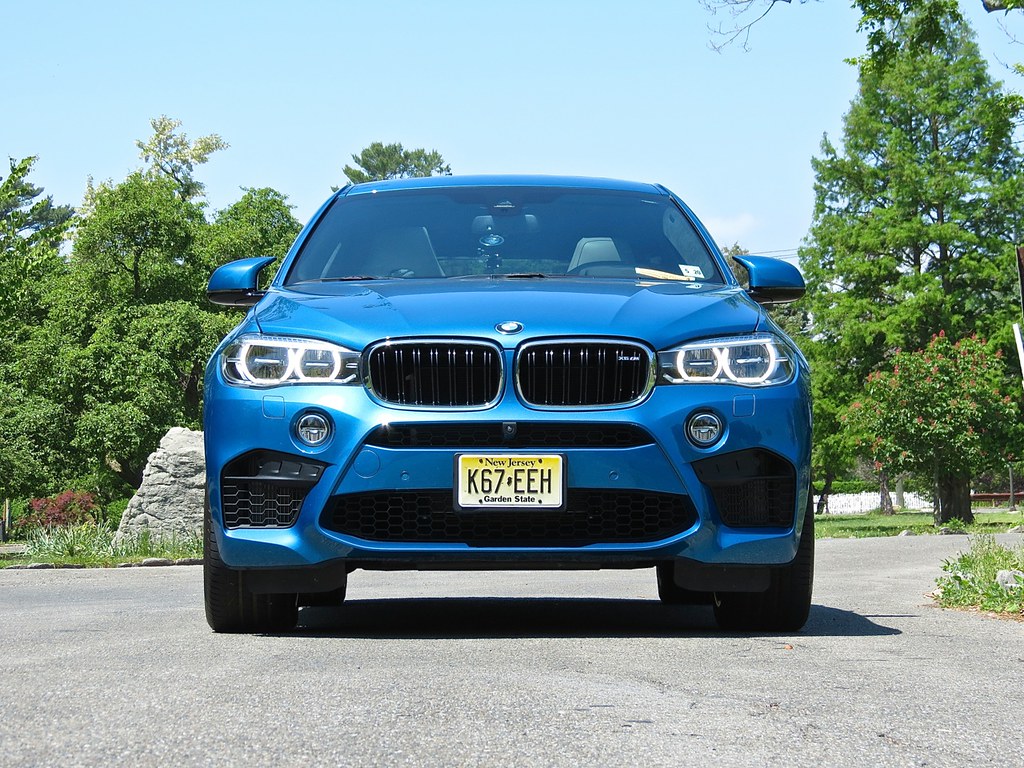 I’ll state again that I see the BMW X6 M as everything that’s right and wrong with BMW sitting on the same four wheels. Engineering and quality wise, BMW has executed this car brilliantly. They’ve made this big SUV better to drive than many would have thought possible just a few years ago. In a world where more and more car buyers are flocking to SUVs, the X6 M is surely a dream machine for many, and rightfully so. It just isn’t for me, though.

Making a big SUV fast is like trying to turn a whale into a dolphin. I am amazed at how much they’ve been able to do with it, but at the end of the day, the whale is still a whale.

Other than my disdain for the Coupe SUV styling (which I still find repulsing), everything I disliked about the X6 M stemmed more from the fact that it’s inherently inhibited in being a large SUV. If I want something fast, lighter weight always takes priority, and there are so many smaller SUVs I’d much rather have.

I also think $120,000 is a lot to spend for something I see as being so compromised, especially with the Jeep SRT available at 2/3rds the price. Don’t get me wrong, I like a fast SUV, but I don’t personally like them enough to pay top-dollar for one.

That’s my opinion, part objective and part subjective. If you disagree, then the BMW X6 M may be a great option for you. 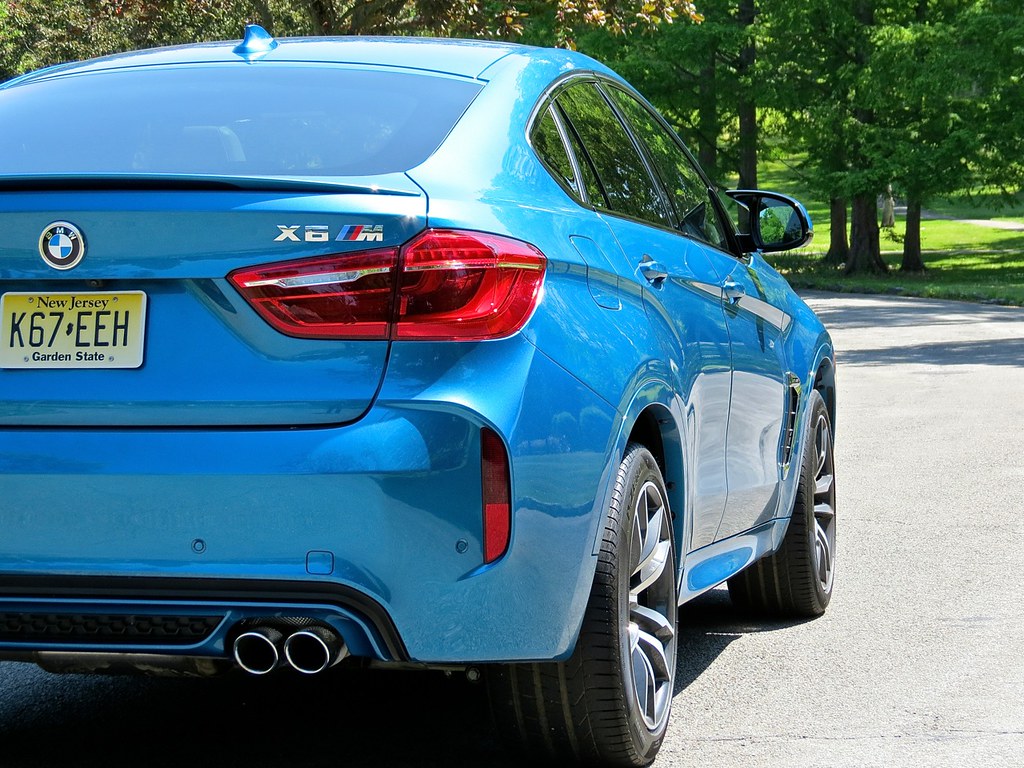 2 thoughts on “BMW X6 M Driven: The best and worst of BMW”